Experience 16 of the best brasseries in Paris

There are three types of restaurants in France: un bistro is usually a pretty casual neighbourhood restaurant that offers typical French cuisine, un restaurant (or “un restau” or “resto” in short) that serves any kind of food and une brasserie that serve throughout the day, till sometimes very late at night and has a larger menu, with usually very traditional French cuisine.

In France, Flanders, and the Francophone world, a brasserie is a type of French restaurant with a relaxed setting, which serves single dishes and other meals. The word brasserie is also French for "brewery" and, by extension, "the brewing business". A brasserie can be expected to have professional service, printed menus, and, traditionally, white linen—unlike a bistro which may have none of these. Typically, a brasserie is open every day of the week and serves the same menu all day. A good example of brasserie dish is steak frites.

The term brasserie is French for "brewery", from Middle French brasser "to brew", from Old French bracier, from Vulgar Latin braciare, of Celtic origin. Its first usage in English was in 1864.The origin of the word probably stems from the fact that beer was brewed on the premises rather than brought in: thus an inn would brew its own beer as well as supply food and invariably accommodation too.

Experience these 16 breathtaking brasseries in Paris (click on the names for more details, images & directions): 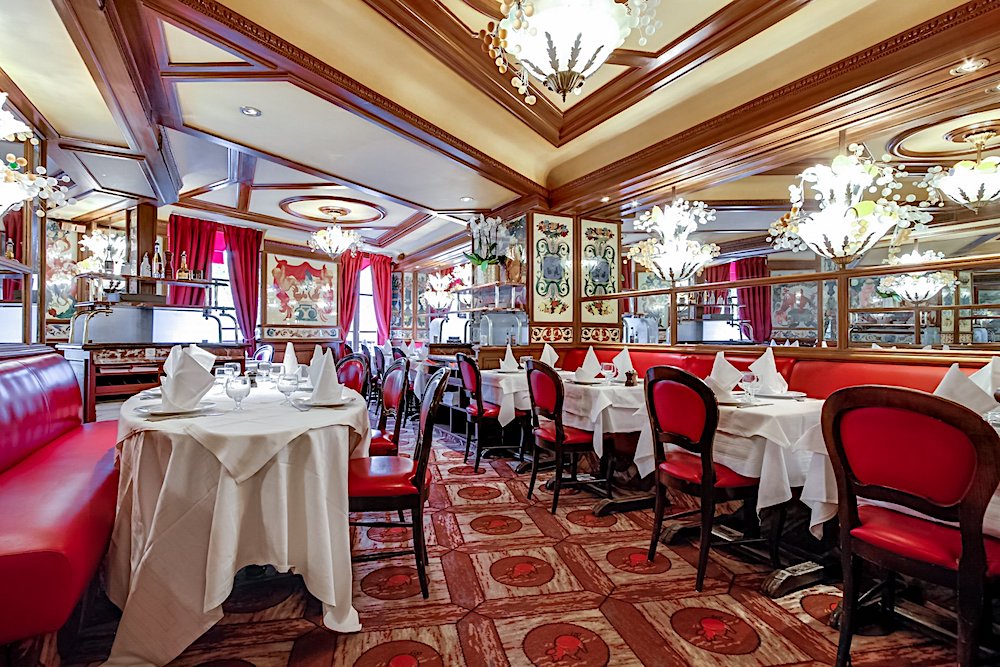 Au Pied de Cochon is a Paris institution, very near the Centre Pompidou, on your way from shopping to sightseeing the Marais. It is decorated with a profusion of Art Nouveau stylistic touches, like mirrors, fantastic chandeliers, paintings of lovely ladies. There is also an enticing terrace, and, as it's open 24/7, you can come in anytime for a meal and to watch the world go by. 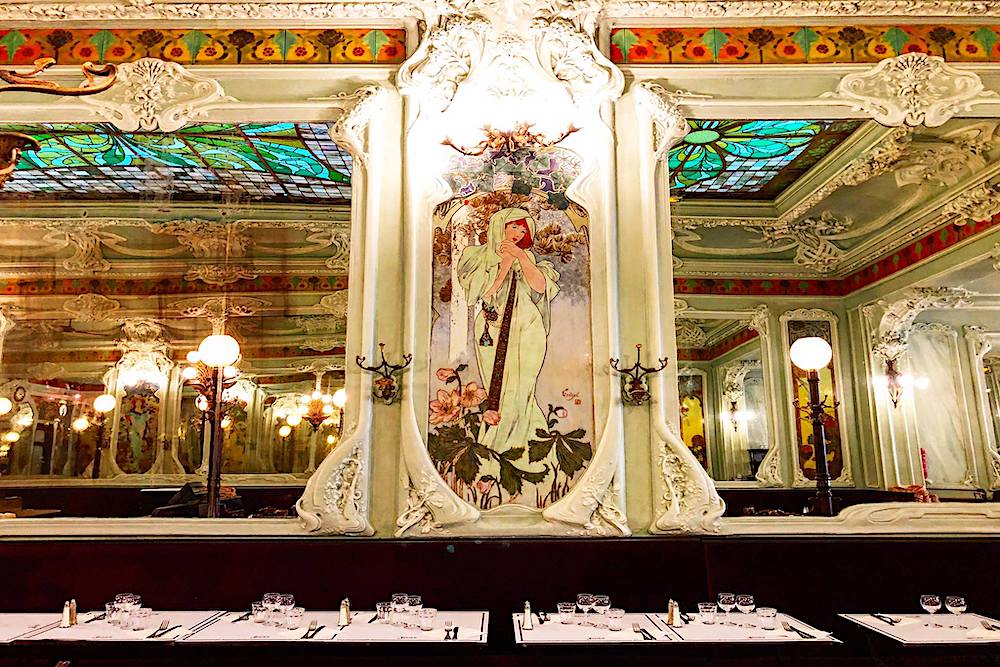 Bouillon Julien is one of the most beautiful restaurants in Paris, if not the world. It remains one of the best preserved examples of the Art Nouveau style. Over the years, it has been the favoured haunt of many well-known cultural figures. Edith Piaf and her lover, Marcel Cerdan, the champion boxer, would frequently dine at ‘table n. 24’. 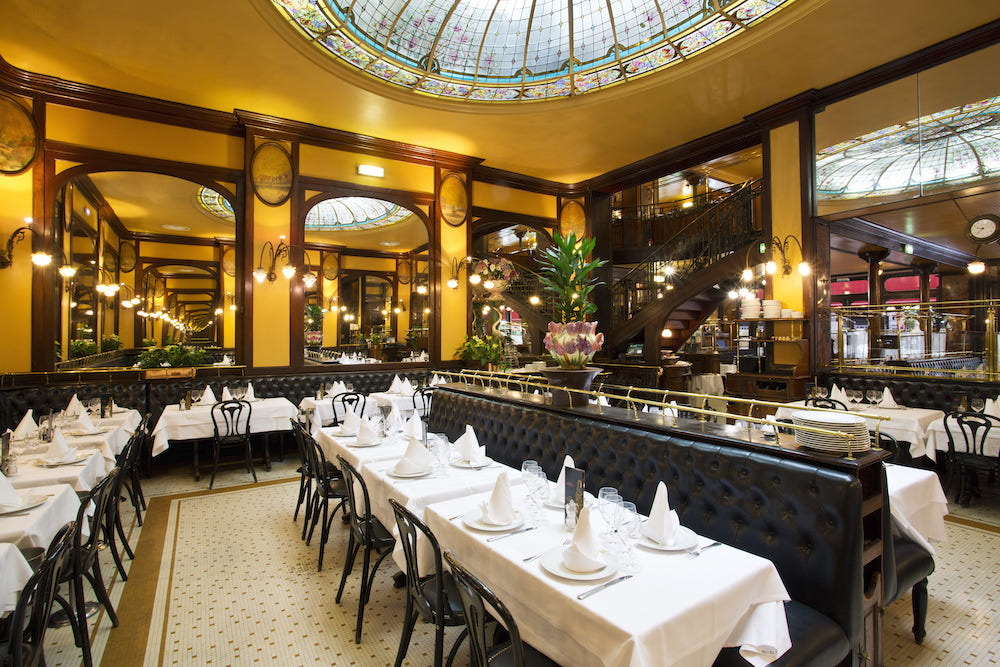 Founded in 1864, close to the Place des Vosges and the Place de la Bastille, the Brasserie Bofinger is considered by many as the "most beautiful brasserie in Paris". In the heart of Paris 4, in a Belle Epoque decor, come and discover the finesse and quality of a typical Alsatian meal. 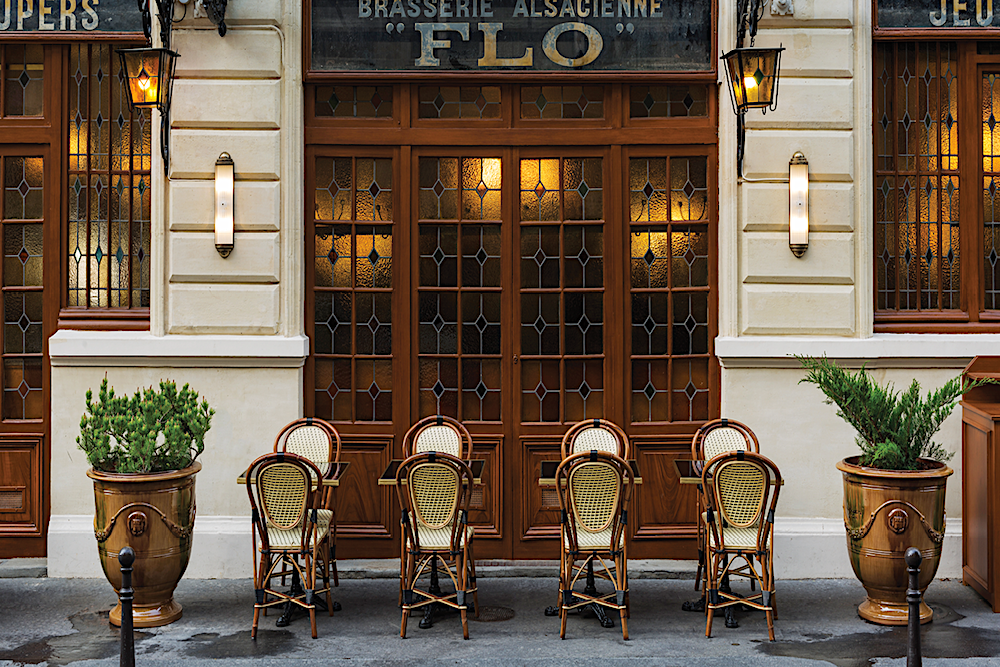 Floderer is the original name of the first brasserie known as Flo at their Cour des Petites Écuries address in Paris. Founded by two Alsatians exiled following the German annexation of the region at the end of the 19th century, this institution quickly became one of the most prestigious brasseries in Paris. 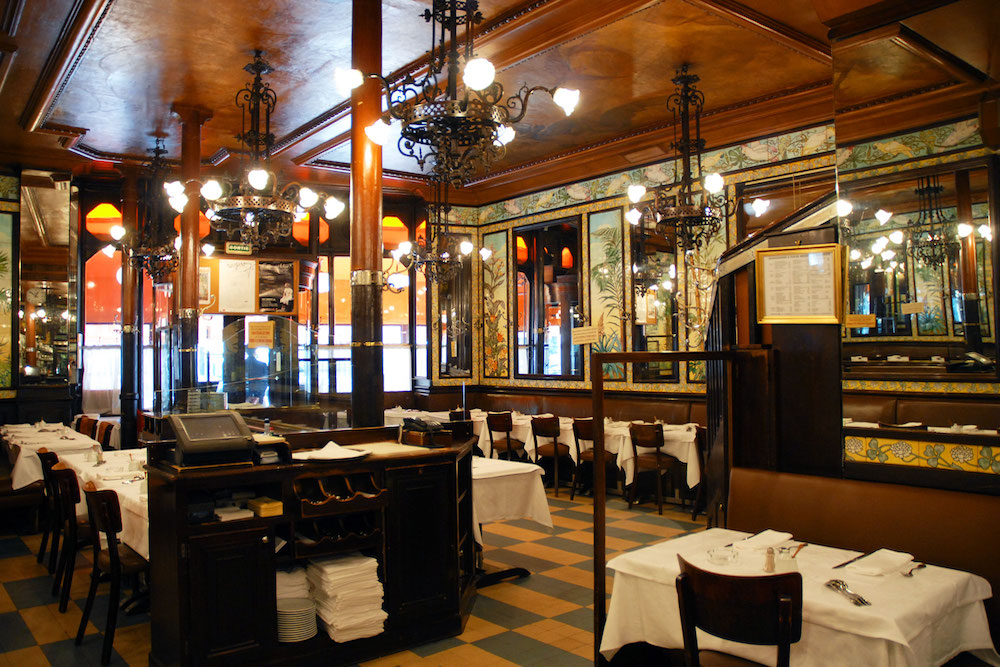 Brasserie Lipp is one of the oldest Parisian brasseries. With 137 years of business, Lipp is a four-lettered institution in the heart of Saint Germain. A classic brasserie aesthetic with antique mosaics, wall to wall mirrors, and leather benches. Tables snake the walls, each with pressed white linen tablecloths, pristine cutlery and fine glassware. 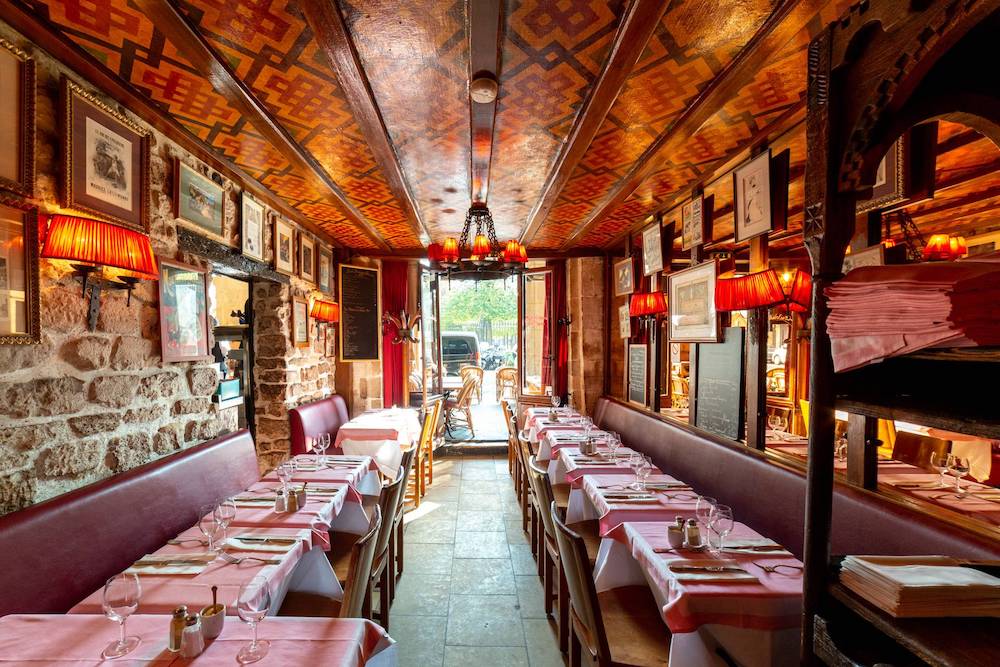 Ma Bourgogne is one the most famous wine bistro's of Paris. You just can’t miss it, especially when wandering along the arcades of the well known Place des Vosges. There is a special ambiance and a mix between country flavoured cooking and more adventurous dishes, attracts both tourists and the old regular customers of Le Marais. 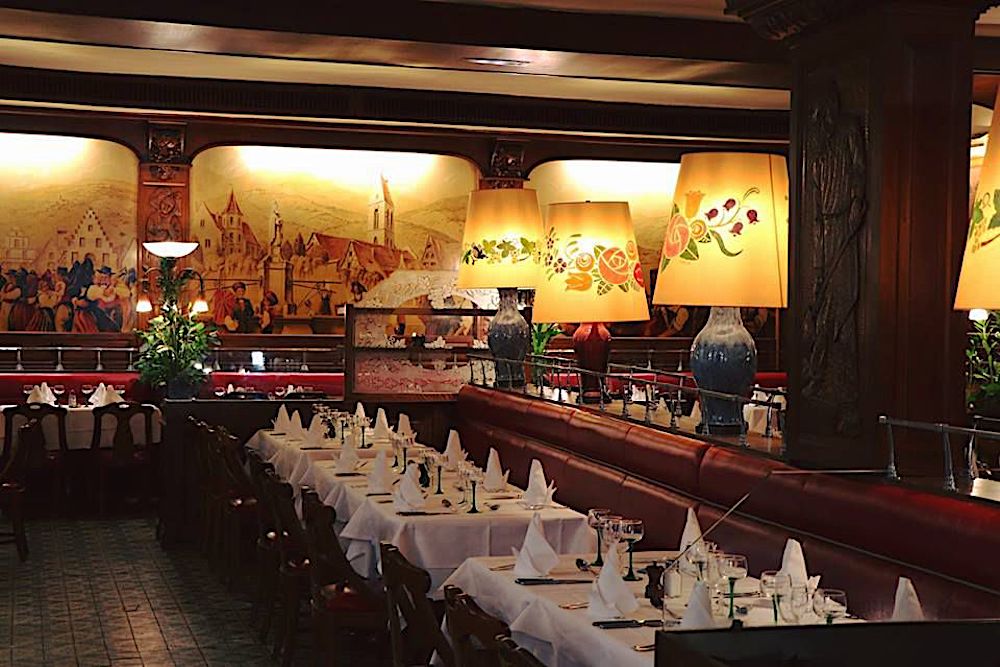 Chez Jenny perpetuates the Alsatian culture and its generous gastronomy. Its authentic decor with Spindler wood paneling and its superb mosaics on the floor give it the reputation of one of the most beautiful brasseries of Paris. 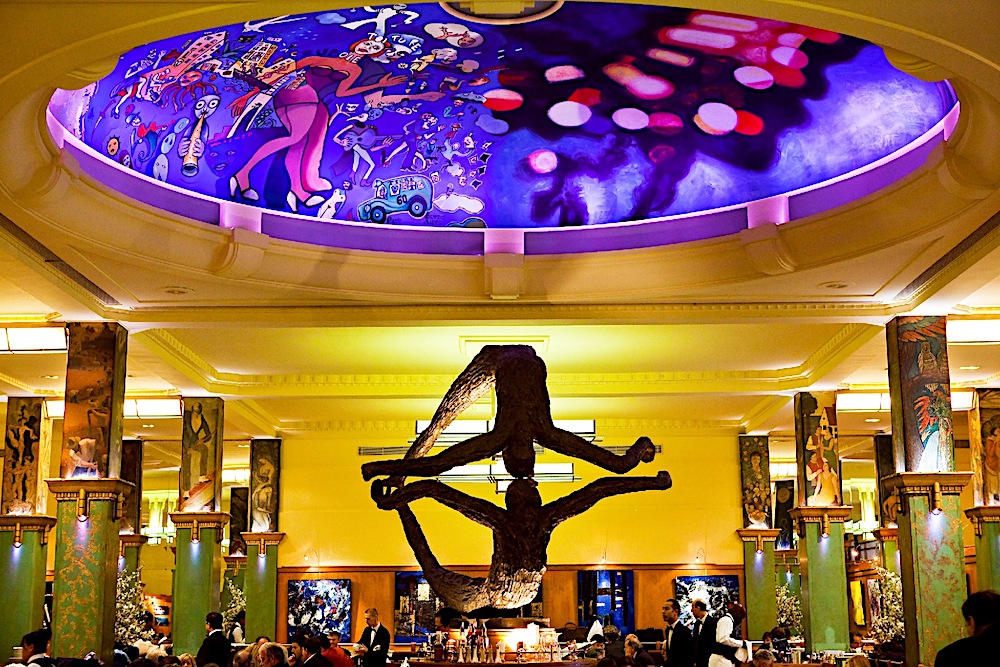 Since 1927 La Brasserie La Coupole has been a symbol of Montparnasse history. La Coupole has a famously vast dining room and painted dome which was once regularly graced by the artist set like Picasso, Jean-Paul Sartre and Simone de Beauvoir. People still come here from all over the world, to marvel at its splendour - all 1000 square metres and 33 pillars. 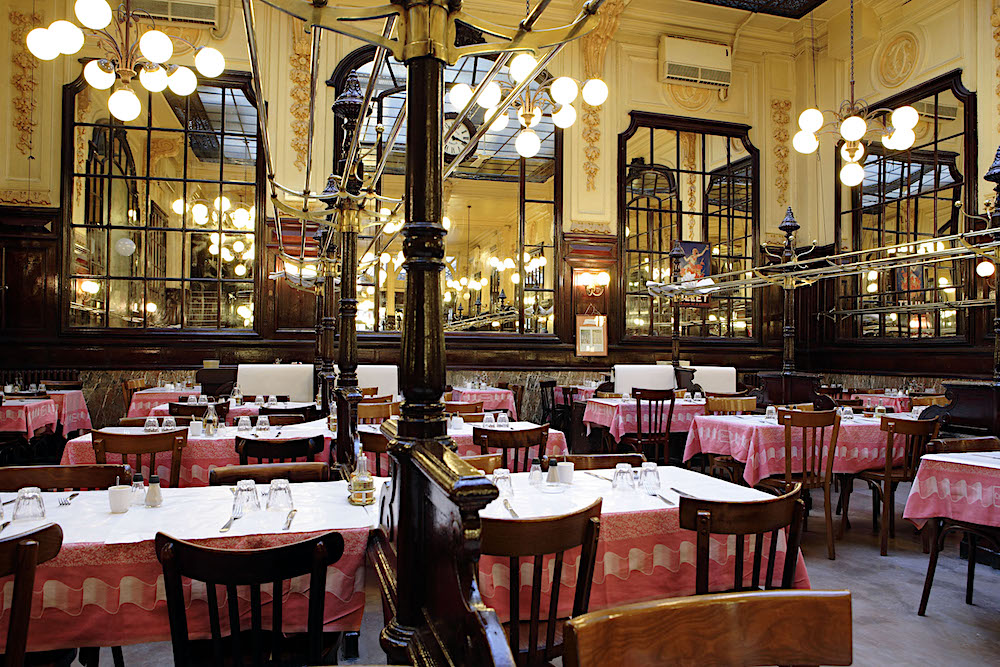 In 1896, the Bouillon Chartier was born out of a very simple concept – provide a decent meal at a reasonable price and give customers good service in order to earn their loyalty. 50 million meals, and only four owners later, the recipe is still every bit as much a success. 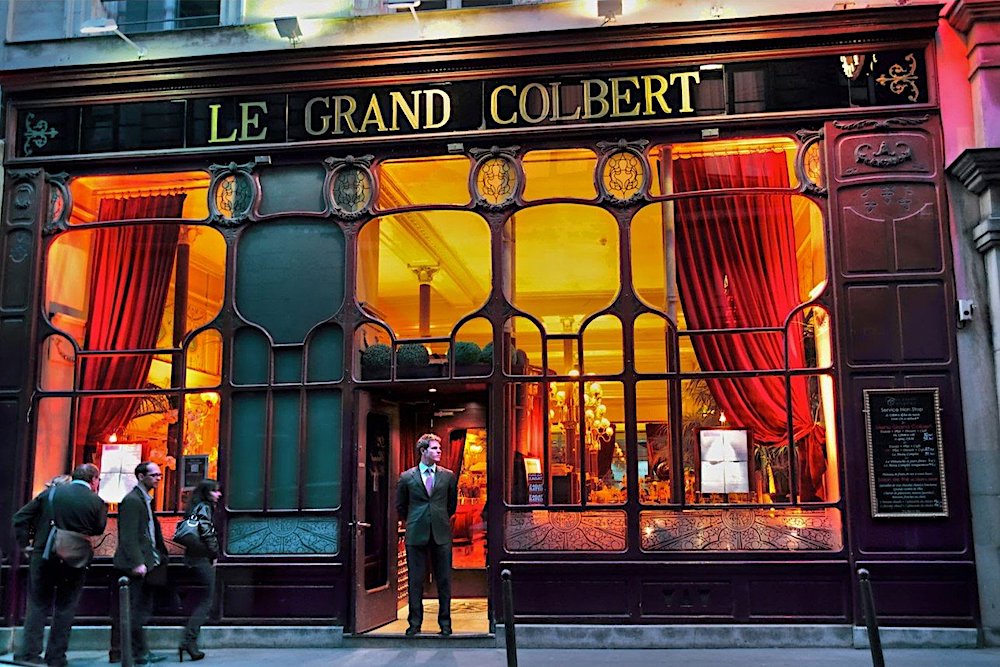 Le Grand Colbert, taken from the name of Louis XIV’s famous minister, a well versed man on French cuisine in which some dishes still refer to his celebrity, is situated in the heart of the 2nd district in Paris which borders the Palais Royal gardens, la Place des Victoires, the Stock Exchange and well known theatres such as Les Bouffes Parisiens, La Michodière as well as Le Theatre des Variétés, Palais Royal and many others. 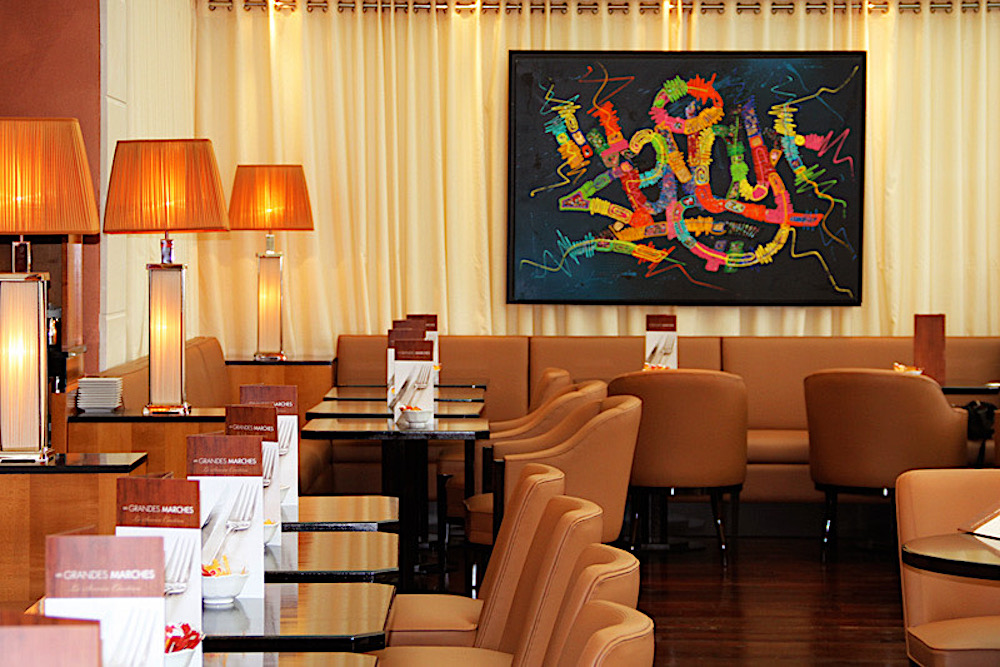 Les Grandes Marches is somewhat the grande dame of the Bastille. Situated next to the opera house designed by Carlos Ott, this stylish, brightly-lit brasserie now has a large heated terrace seating 60 people. Since it reopened after building work in 2012, the establishment welcomes you in an elegant, cosy decor, from 8 am to midnight. 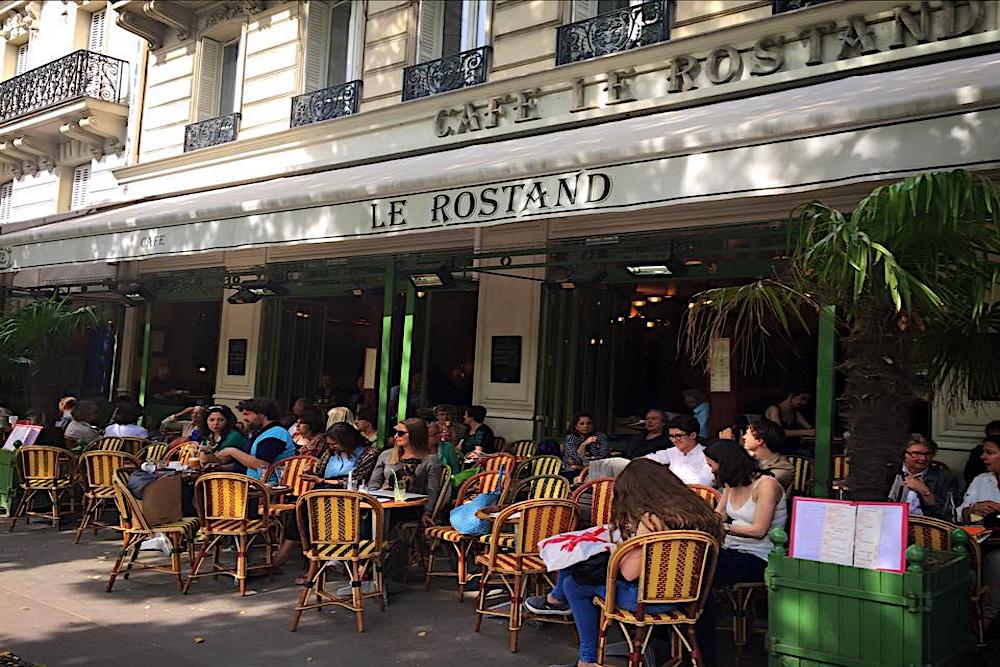 Le Rostand has a truly wonderful view of the Jardins du Luxembourg from its classy interior, decked out with Oriental paintings, a long mahogany bar and wall-length mirrors. The drinks list is lined with whiskies and cocktails and they serve bar snacks, croques, soups and salads. 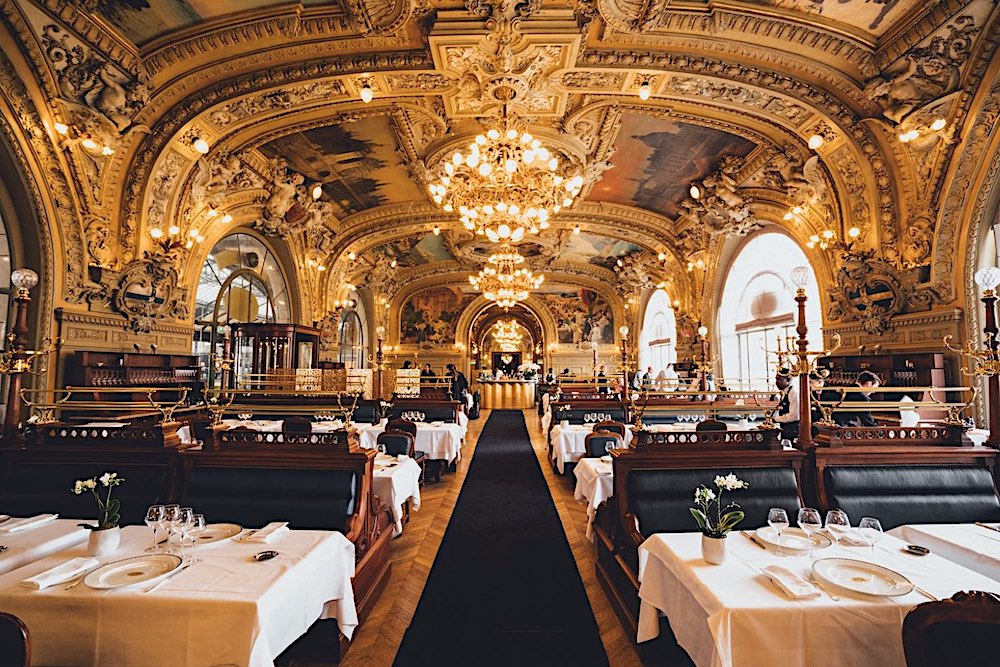 Le Train Bleu is a restaurant located in the hall of the Gare de Lyon railway station in Paris, France. Le Train Bleu, an iconic restaurant is a majestic place where the show is displayed both in the kitchen and in the dining room.Le Train Bleu offers travelers and Parisian customers a timeless moment, an experience that is seen as the beginning of a fabulous journey to discover the most beautiful terroirs of France. 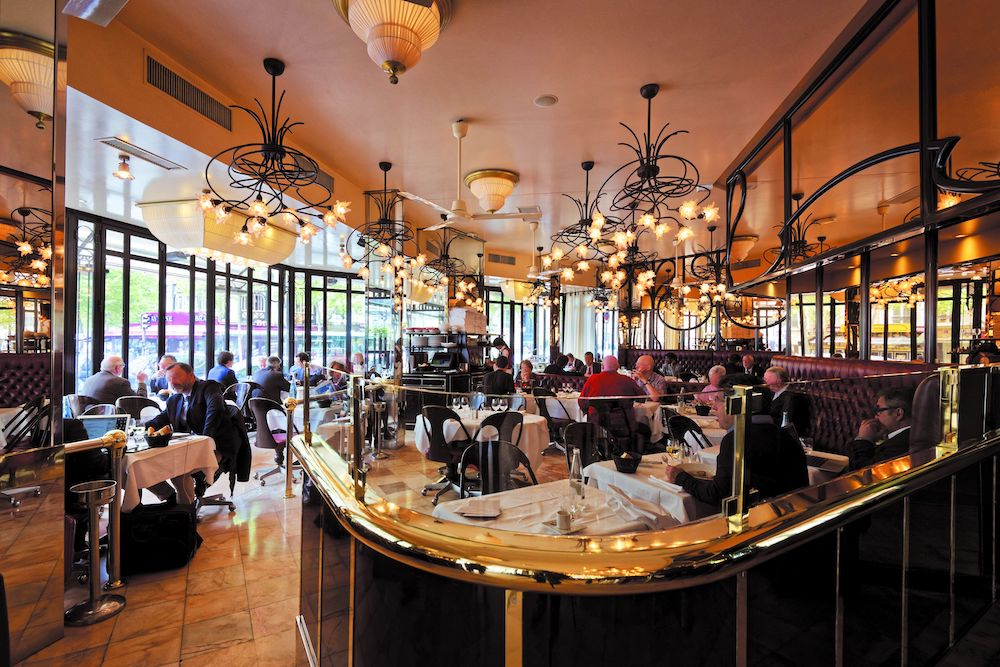 L’Européen has stood across from the Lyon station in Paris for over a century. It has earned its reputation as a magnificent brasserie, specializing in seafood, in the true Parisian style. Now with the help of the decorator SLAVIK, L’Européen has its own personal style.You can be seated in dining rooms on several floors, guaranteeing a more private meal. 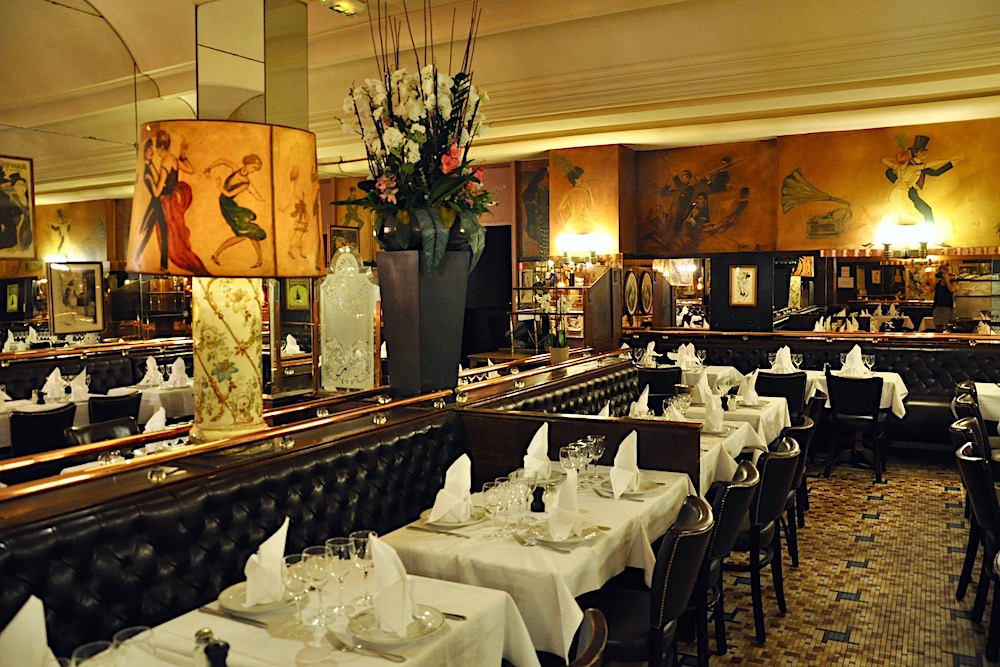 This delightful combination of Art Nouveau and Art Déco is a mere stone's throw from the Gare du Nord train station. Since 1925, the traditional brasserie has been extending a gourmet welcome to Parisian travellers. Businessmen heading off to London, European Parliament members returning from Brussels, families visiting from the provinces... everyone's paths cross at Terminus Nord, the most animated of the great Parisian brasseries. 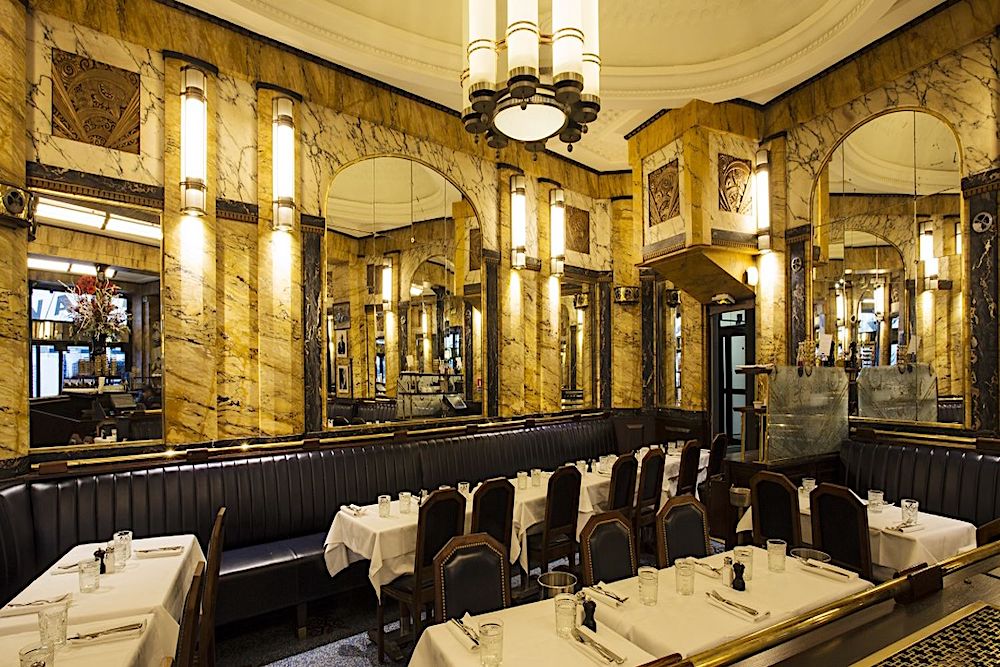 Situated right in the heart of Paris, the Vaudeville has built its excellent reputation on the quality of its cuisine and service. People like to come here to share traditional French cuisine and, in fine summer weather, enjoy the terrace a mere stone's throw from the Paris Bourse.