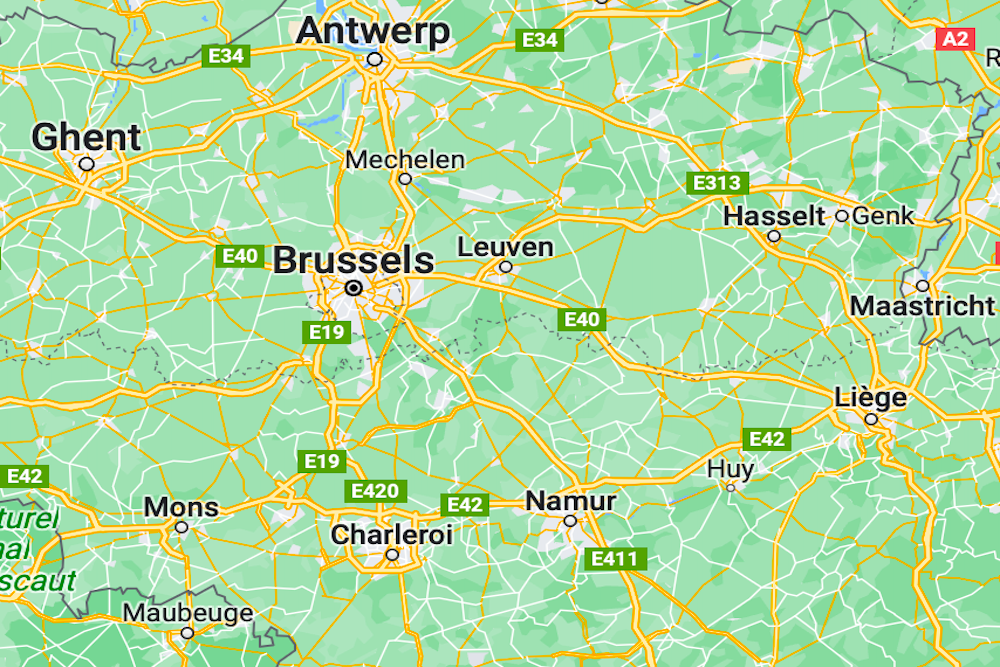 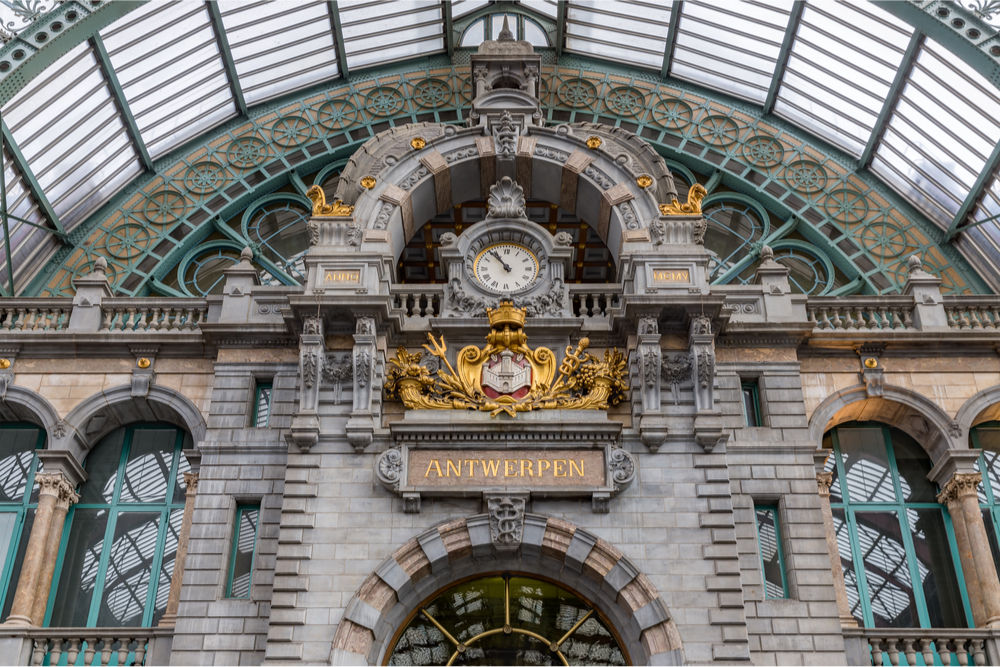 Antwerp is on the River Scheldt, linked to the North Sea by the river's Westerschelde estuary. It is about 40 kilometres (25 mi) north of Brussels, and about 15 kilometres (9 mi) south of the Dutch border. The Port of Antwerp is one of the biggest in the world, ranking second in Europe and within the top 20 globally. The city is also known for its diamond industry and trade.

1. CATHEDRAL OF OUR LADY 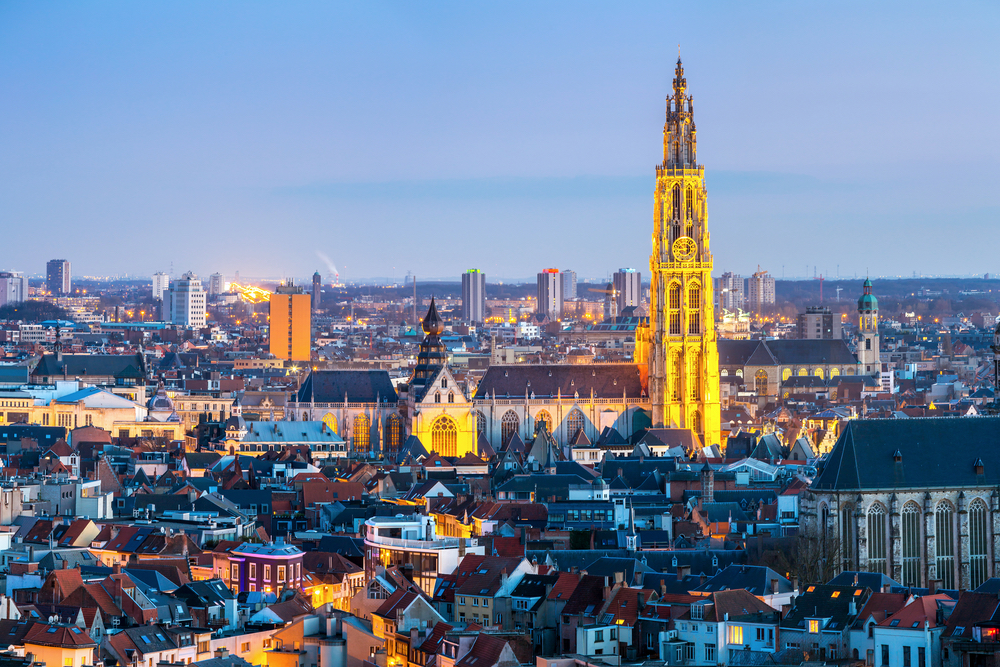 The Cathedral of Our Lady is a Roman Catholic cathedral started in 1352 and, although the first stage of construction was ended in 1521, has never been 'completed'. In Gothic style, its architects were Jan and Pieter Appelmans. 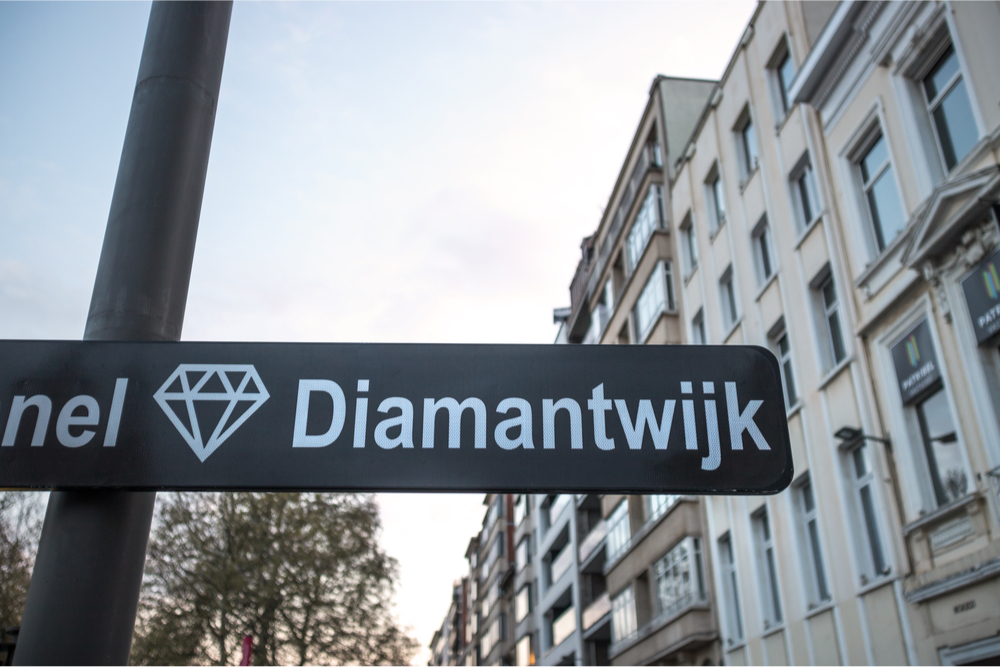 Antwerp's diamond district, also known as the Diamond Quarter (Diamantkwartier), and dubbed the Square Mile, consists of several square blocks covering an area of about one square mile. While as of 2012, much of the gem cutting and polishing work historically done in the neighbourhood had moved to low wage centres elsewhere, about 84% of the world's rough diamonds passed through the district, making it the largest diamond district in the world with a turnover of 54 billion dollars. 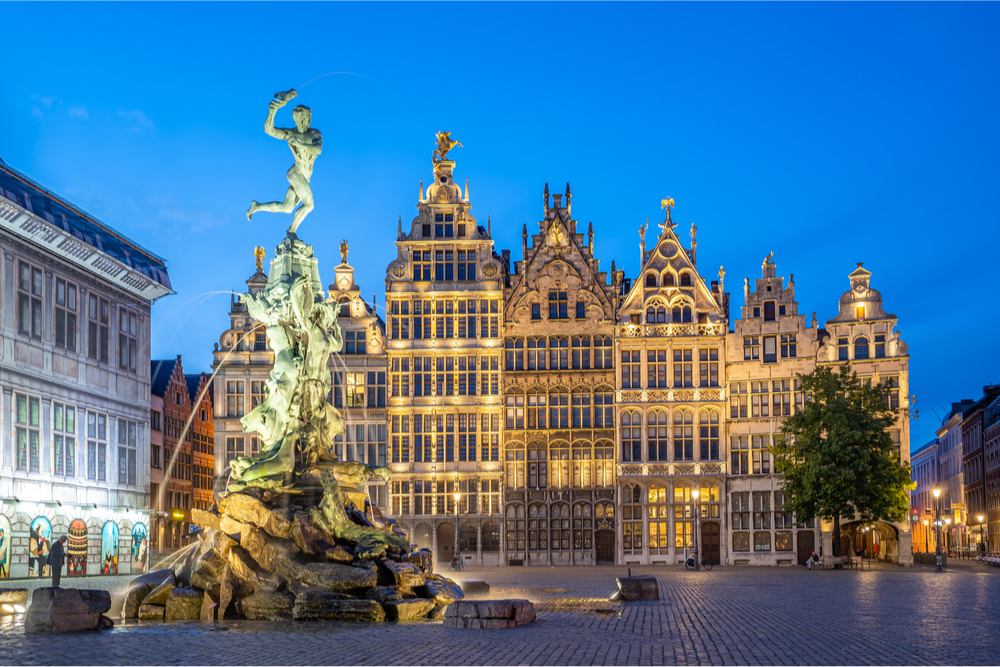 The Grote Markt of Antwerp is a town square situated in the heart of the old city quarter. It is filled with an extravagant city hall, numerous elaborate 16th century guildhalls, many restaurants and cafés. Lying within walking distance of the Scheldt river, it hosts a Christmas market and ice rink in winter. 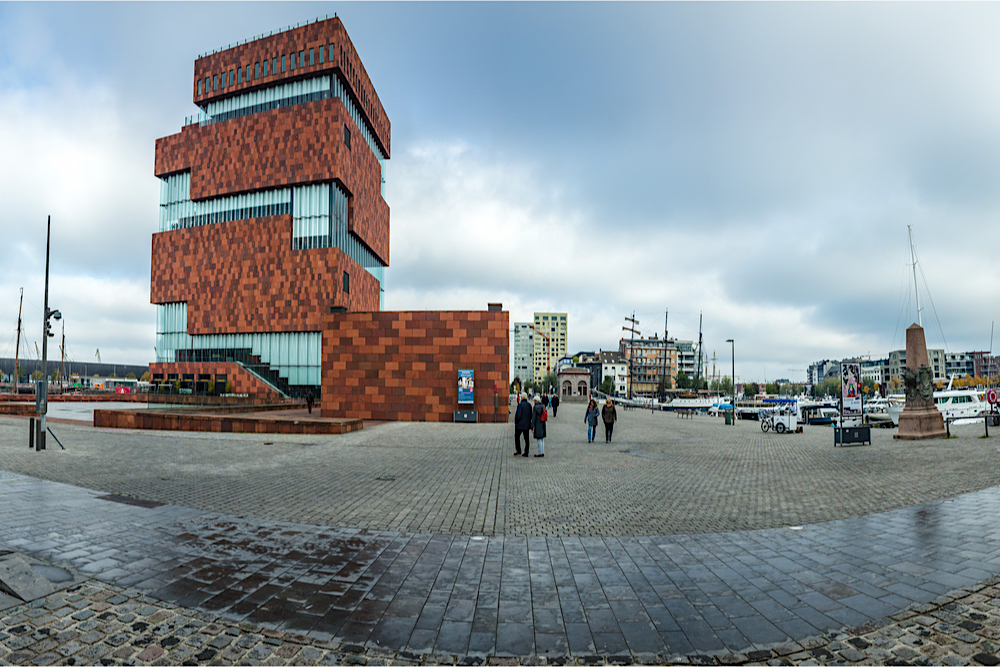 The Museum aan de Stroom (MAS; Dutch for: Museum by the Stream) is located along the river Scheldt in the Eilandje district of Antwerp, Belgium. It opened in May 2011 and is the largest museum in Antwerp. 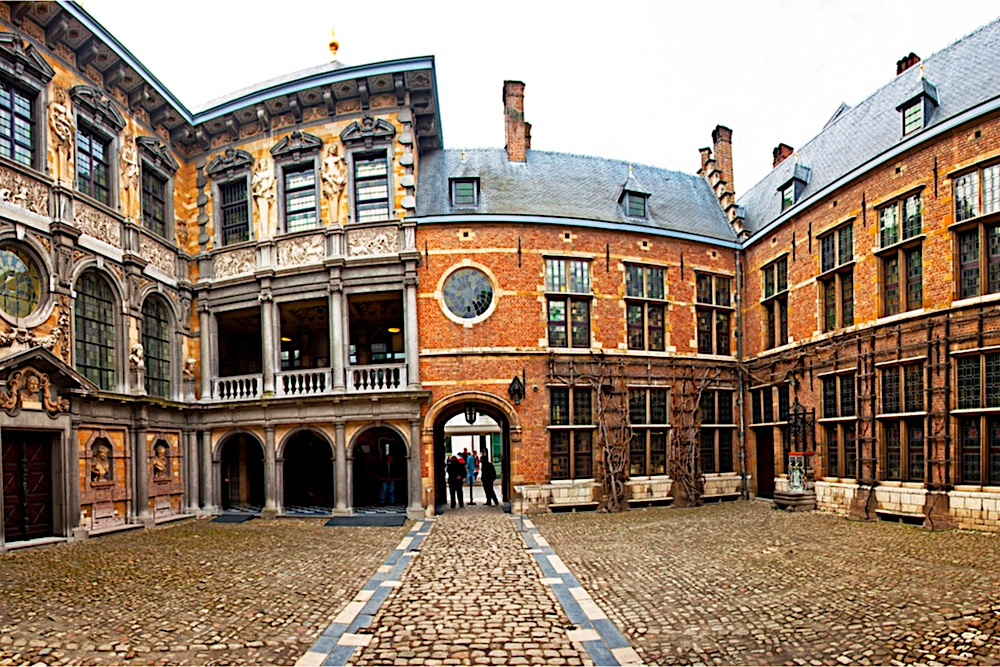 The Rubenshuis is the former home and workshop of Peter Paul Rubens. Purchased in 1610, Rubens had the Flemish townhouse renovated and extended on the basis of designs by himself. 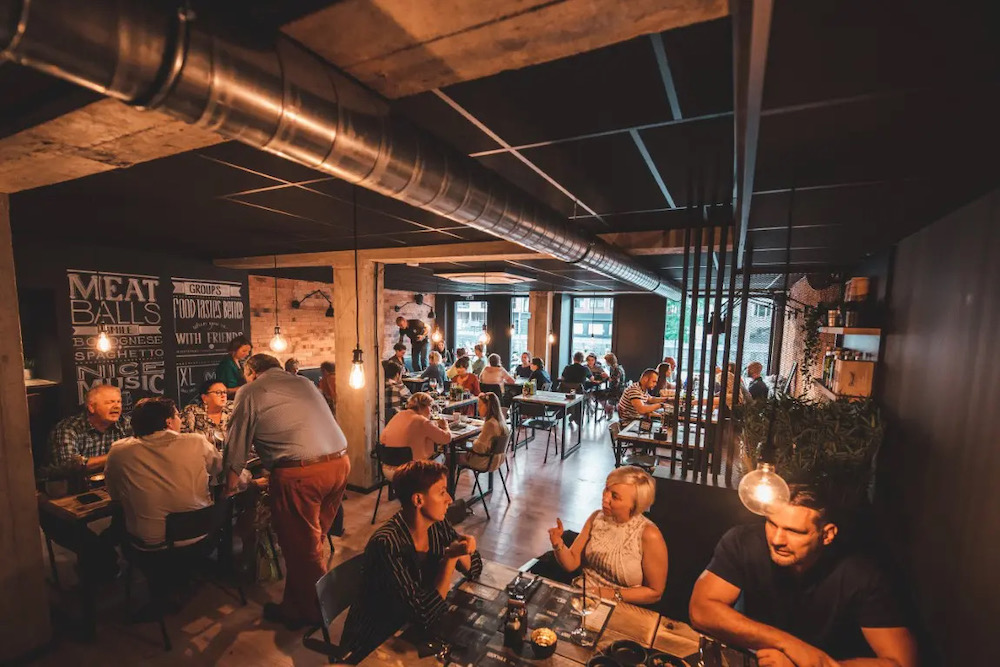 Mister Spaghetti are happy to welcome you to eat a “not ordinary” spaghetti with your friends or family in one of their cozy restaurants. Of course they can't match that of the mama or the grandma, but their spaghetti is just “just different. Cheers to you and spaghetti! 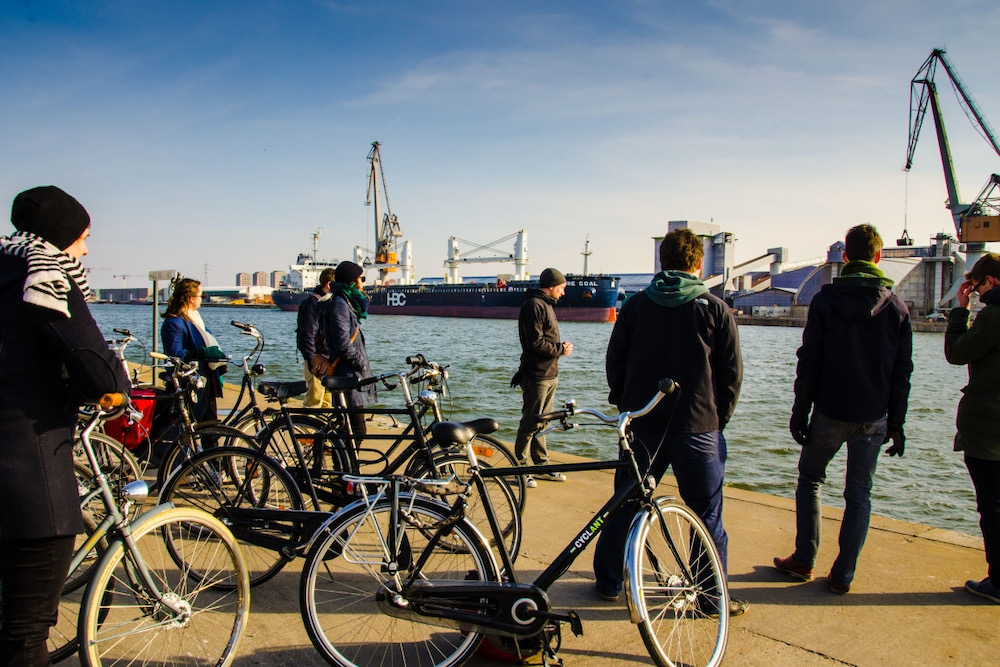 Book a tour: Ride through the city of Antwerp with an experienced guide. Get well informed about touristic highlights or discover hidden gems only locals know. Rent a bike: Experience the city as a local and discover Antwerp at your own tempo. Fun, healthy and inexpensive, a bike is definitely the best way to explore Antwerp. 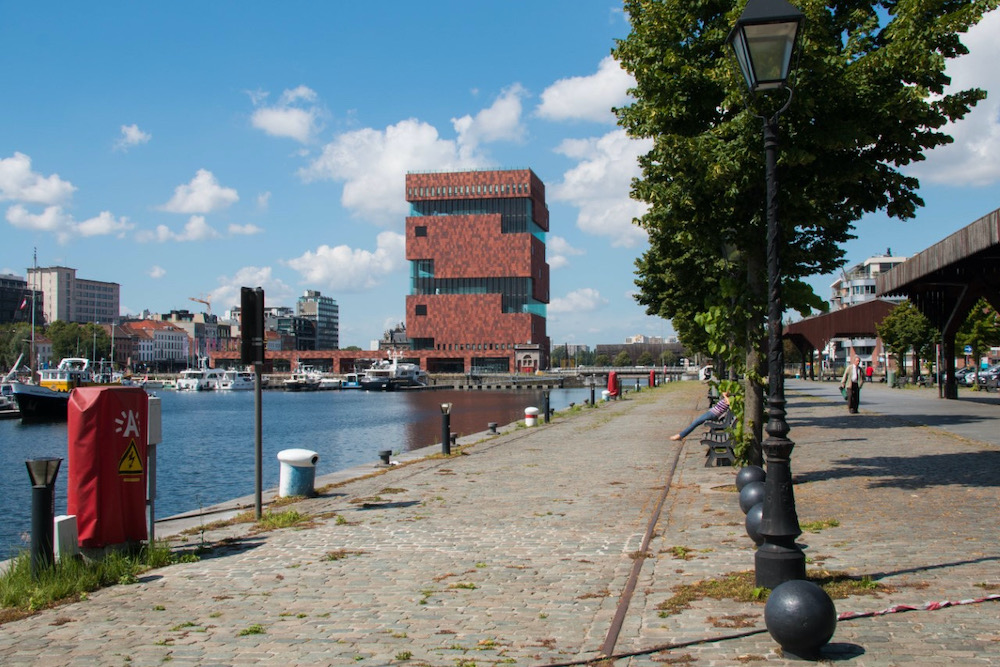 Go where the locals are and leave other tourists behind. Discover the real Belgium, unspoiled by tourism, in this beautiful historic city. Explore the charming historic city center of Antwerp while discovering real Belgian food and culture. Great food, beautiful sights and an expert local guide await you. 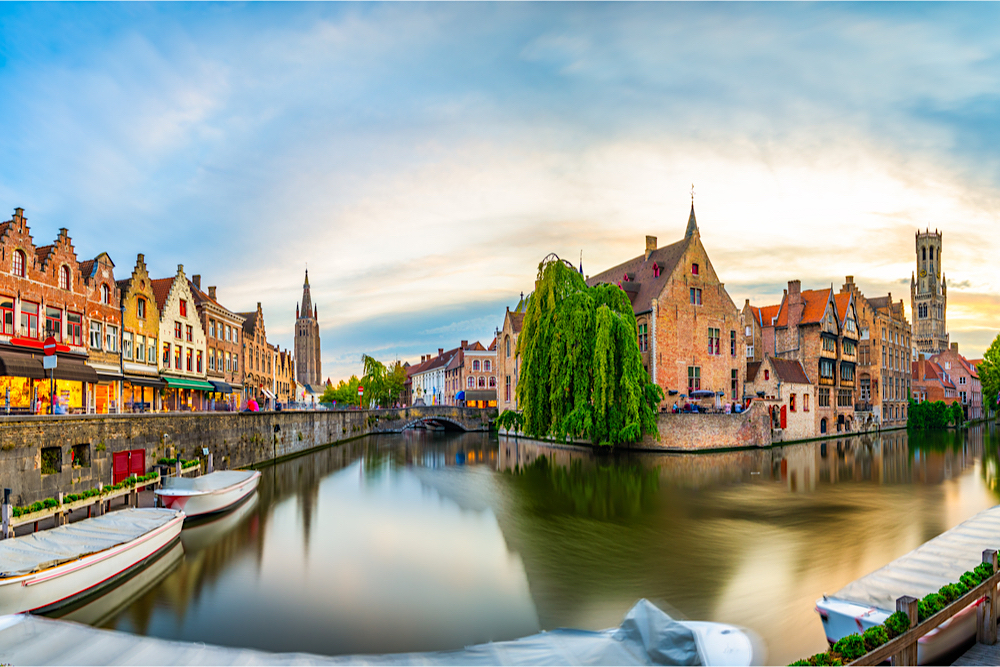 Bruges is the capital and largest city of the province of West Flanders in the Flemish Region of Belgium, in the northwest of the country, and the seventh-largest city of the country by population. Along with a few other canal-based northern cities, such as Amsterdam and St Petersburg, it is sometimes referred to as the Venice of the North. Bruges has a significant economic importance, thanks to its port, and was once one of the world's chief commercial cities. Bruges is a popular tourism destination within Belgium, and is well known as the seat of the College of Europe, a university institute for European studies. 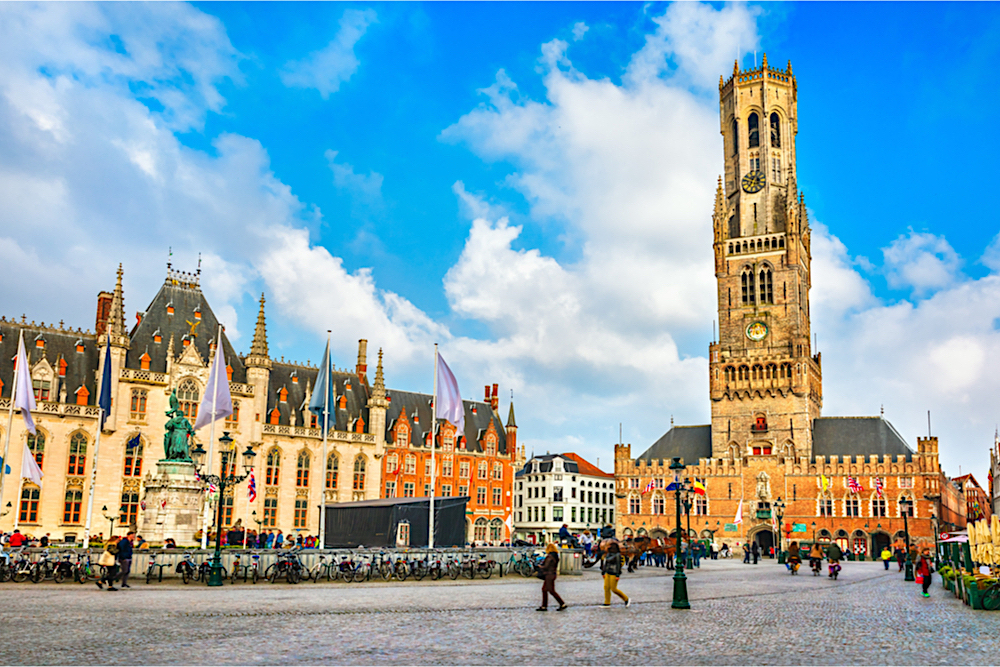 The 83-metre high Belfort (belfry) from the 13th century is one of the three iconic towers of Bruges, together with the towers of Onze-Lieve-Vrouwekerk (Church of Our Lady), and Sint-Salvatorskathedraal (St Saviour’s Cathedral). Those who climb the 366 stairs are rewarded with an impressive view of Bruges and surrounds. On the way up you call in at the treasury where the city stamps, seals, and funds were kept in the Middle Ages. One floor up you reach the impressive music turned out by the carillon and from the tower you see the keyboard now used for the carillon bells. 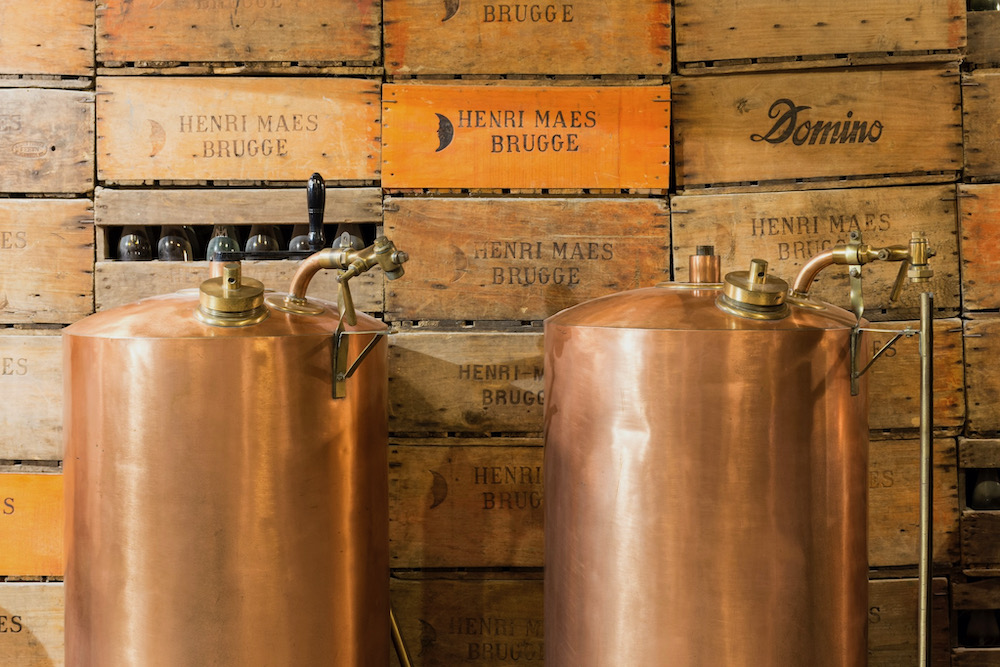 This authentic brewery in the centre of Bruges is a family business with a tradition stretching back through six generations to 1856. This is where the Bruges city beer - the Brugse Zot - is brewed: a strong-tasting, high-fermentation beer based on malt, hops and special yeast. In 2016 a unique underground beer pipeline, some 3 km long, was laid from the brewery to the bottling plant in the suburbs. Daily tours of the brewery are organized, at the end of which visitors are offered a free glass of Brugse Zot blond beer. 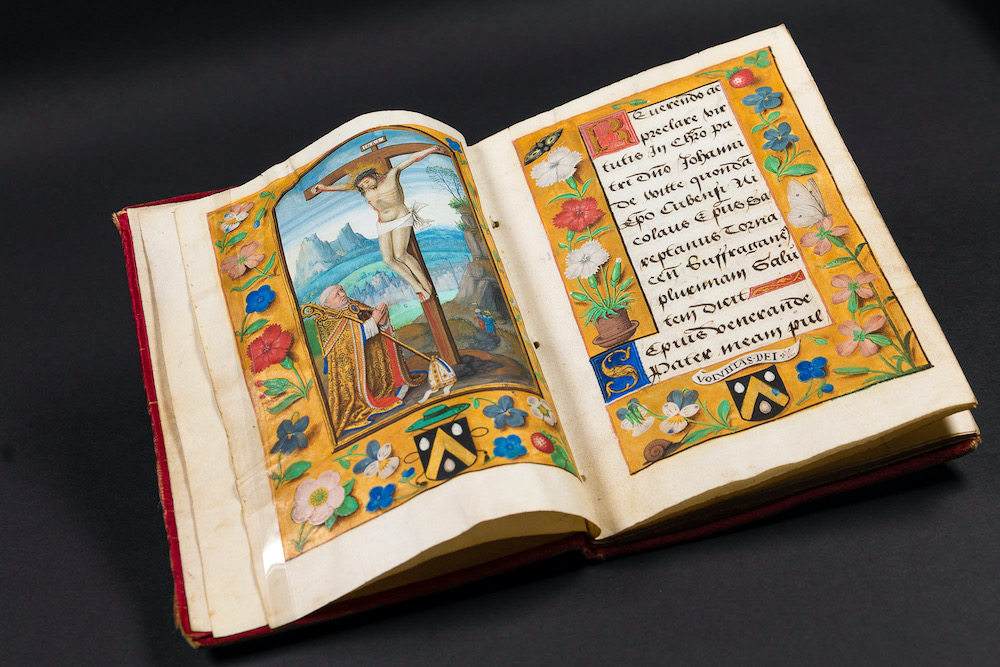 The Groeningemuseum is a municipal museum, built on the site of the medieval Eekhout Abbey. It houses a comprehensive survey of six centuries of Flemish and Belgian painting, from Jan van Eyck to Marcel Broodthaers. 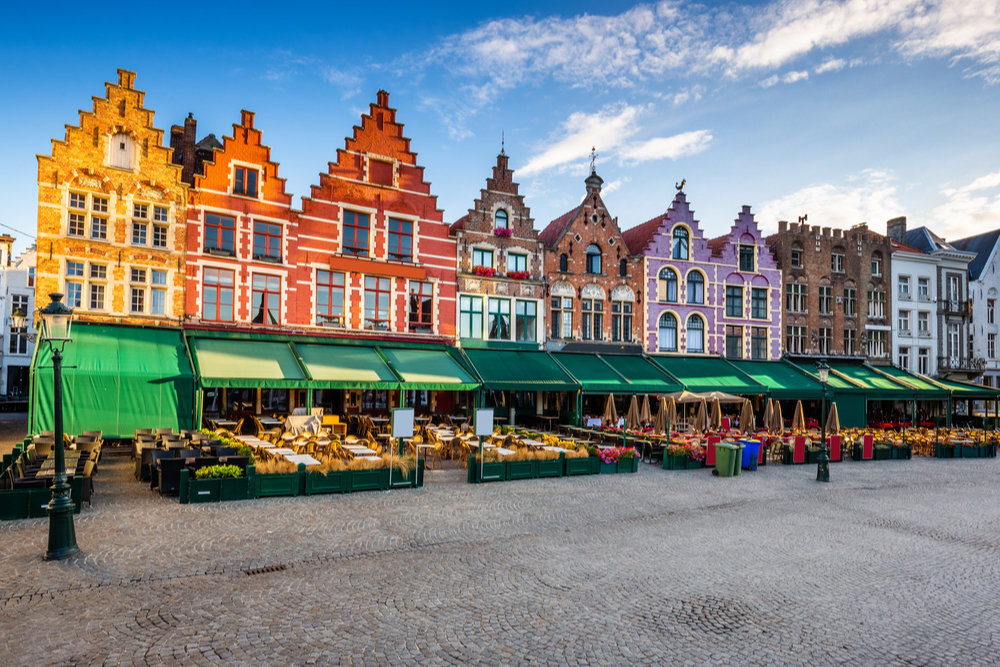 The Markt ("Market Square") is located in the heart of the city and covers an area of about 1 hectare. Some historical highlights around the square include the 12th-century belfry and the West Flanders Provincial Court (originally the Waterhall, which in 1787 was demolished and replaced by a classicist building that from 1850 served as provincial court and after a fire in 1878 was rebuilt in a neo-Gothic style in 1887. In the center of the market stands the statue of Jan Breydel and Pieter de Coninck. 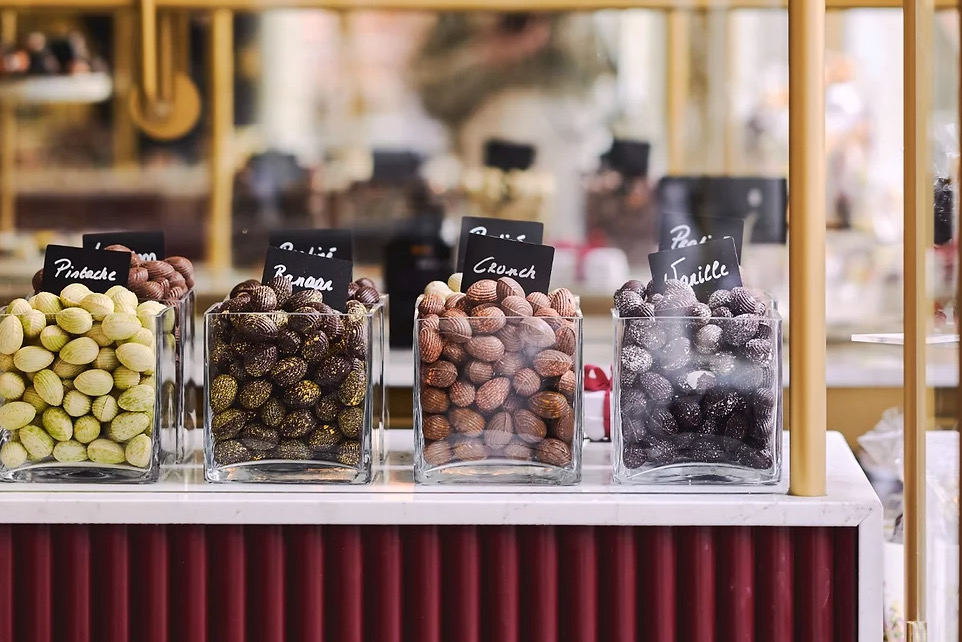 Sukerbuyc is the point of reference in Bruges and the surrounding area. This chocolatier started out in 1977 with a modest 25 kilos of hand-made chocolate per week, only to go on to shift some 1,000 kilos of the finger-licking goodies 30 years later. The crafted pralines are made according to the secret family recipe and can be immediately tasted across the road in De Proeverie, the English tea house under the wings of the chocolaterie.

SLEEP AT THE TOWNHOUSE 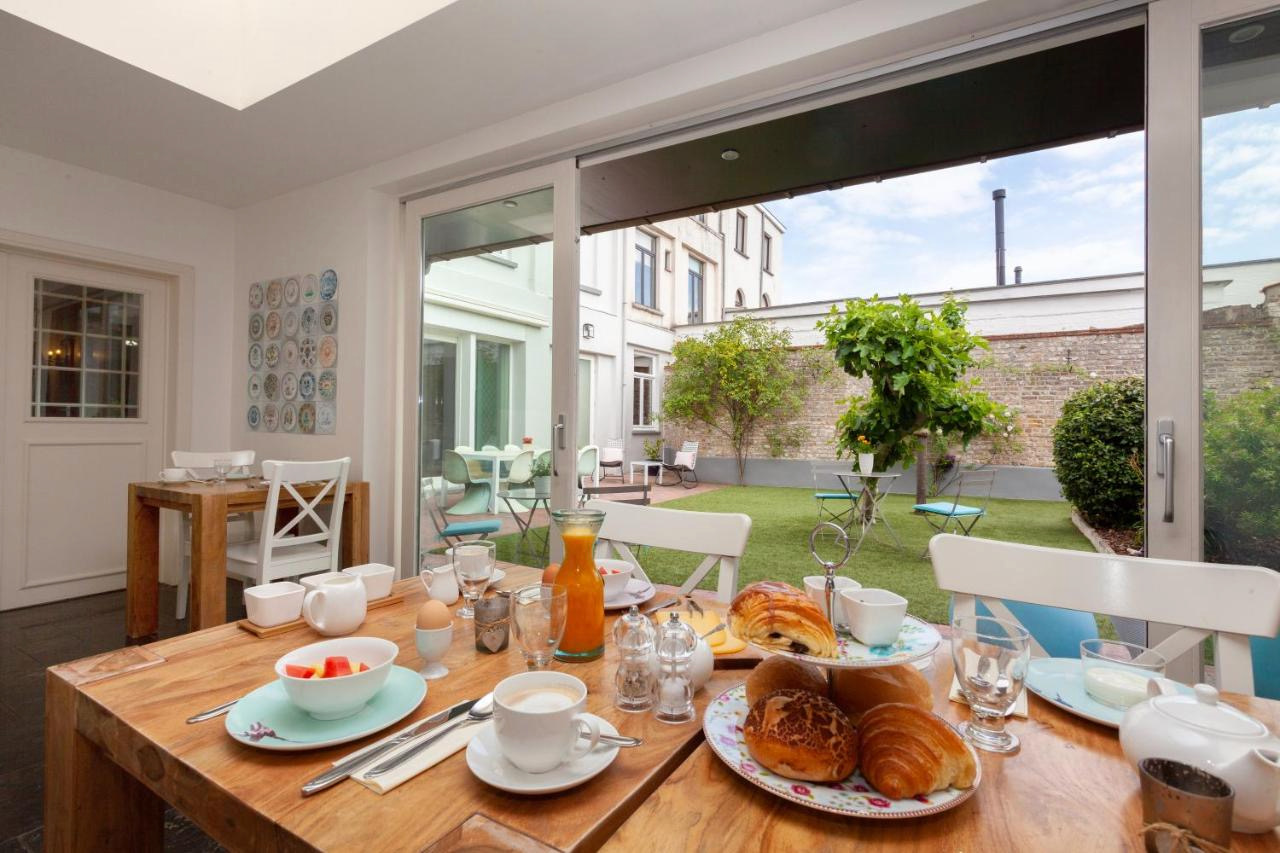 The Townhouse - Bed and Breakfast is located in a 19th century building in the historic city centre, just 5 minutes walking distance from the most romantic spot in Bruges, ‘Het Minnewater’, and a mere 8 minutes from the Market Square. They have been open since 2012 and have welcomed guests from all over the planet and from all walks of life. 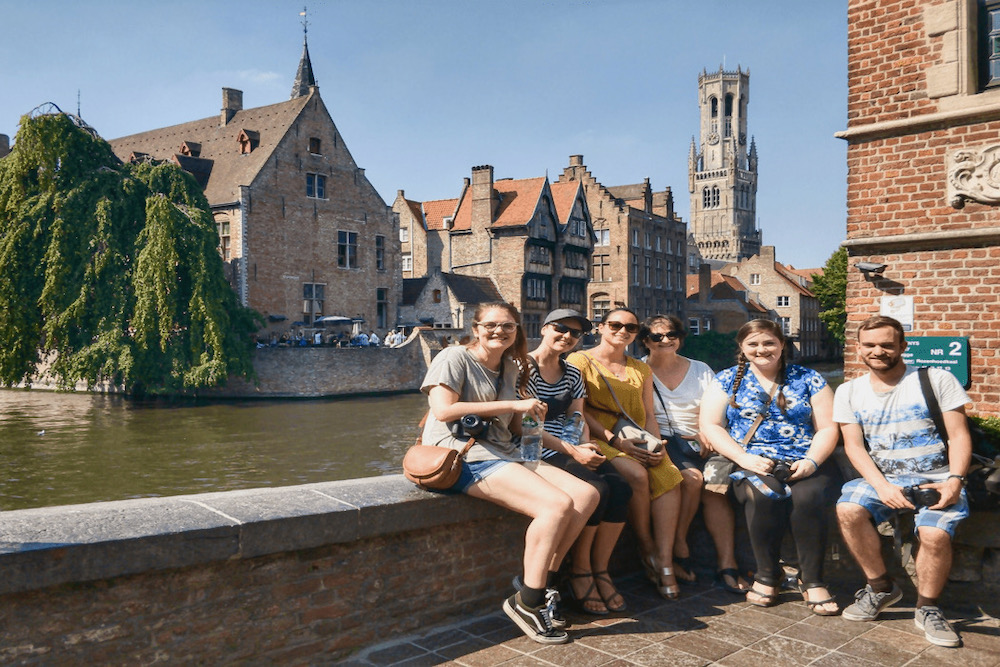 Ambassador Tours & Activities focus on interesting stories rather than a sum-up of historical facts you can expect during a classic tour. Their local storytellers bring history to life. They believe everyone should be able to enjoy a guided city tour through medieval Bruges. They are proud of their Free Walking Tour: Tell Me Stories About Bruges is the no. 1 pay-what-you-want tour in town! They also offer a premium tour with a guaranteed small group: The Best of Bruges. Or they can create a special group tour with possible beer tasting, brewery visit, food tasting, etc. 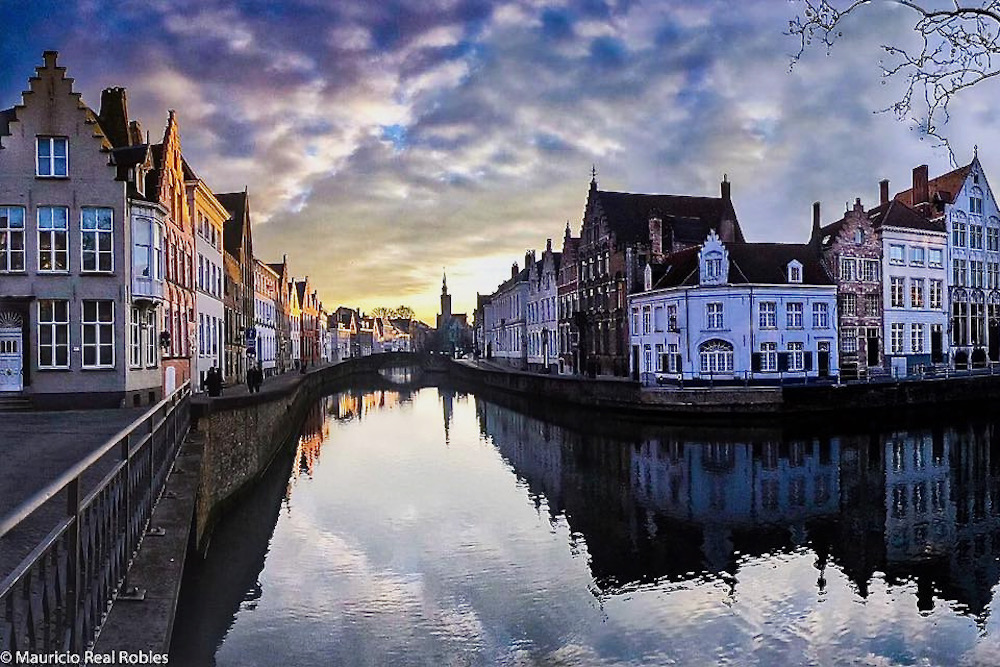 Walk around Bruges with a local guide, explore the historic centre and travel back in time to the golden days of Bruges. On the journey through the beautiful heart of town they will tell you the stories of love, glory and fortune, but also of intrigue, war and conflict. By the end of the tour you'll know more than a local! 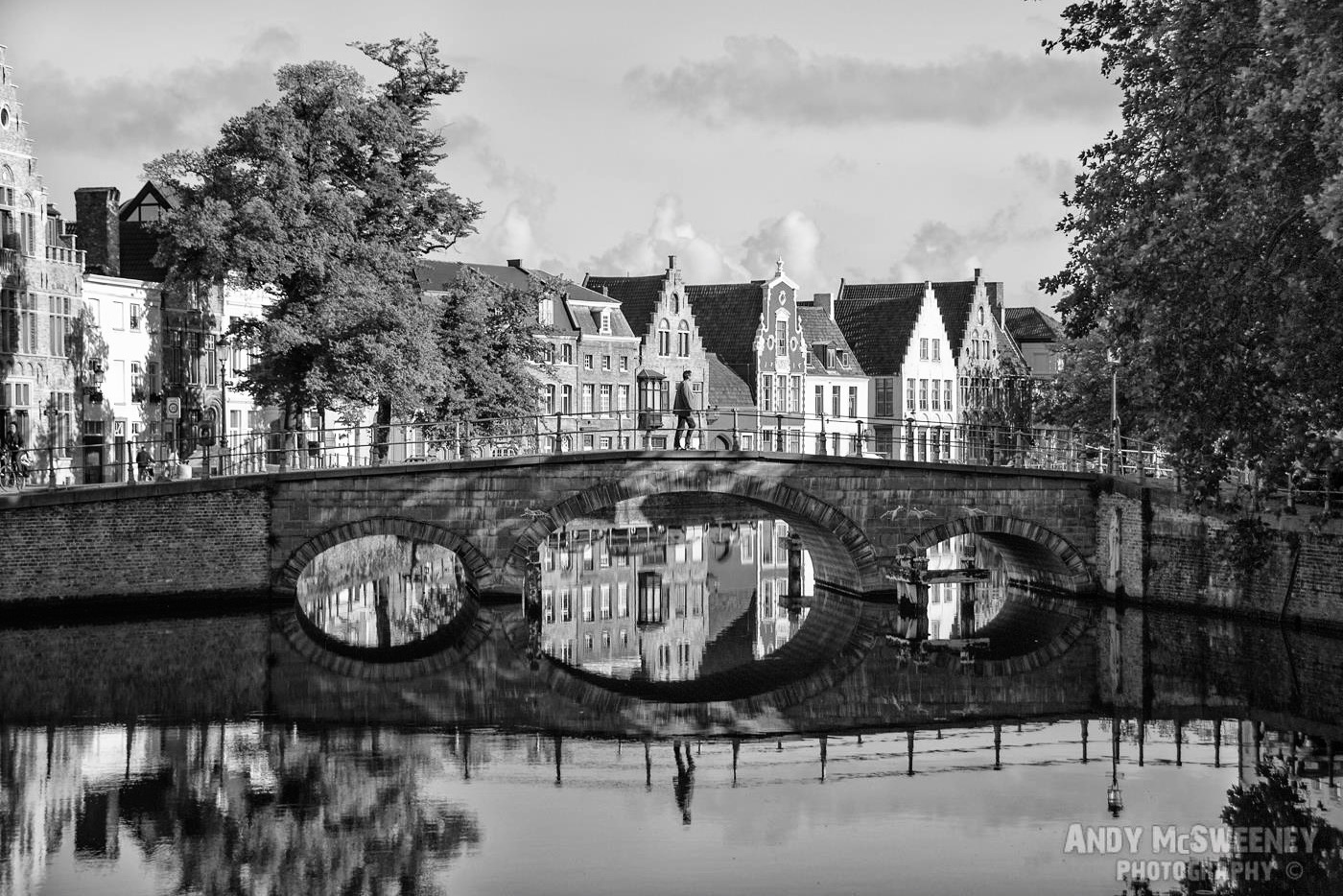 Photo Tour Brugge offers you a daily photo-focused city walking tour in lovely Brugge (Bruges) Belgium, as seen through the eye of resident travel, people & landscape photographer Andy McSweeney. Part photography workshop, part unique city tour: This top rated tour combines the very best of each towards getting you the best shot at the best photography spots and locations in Brugge. 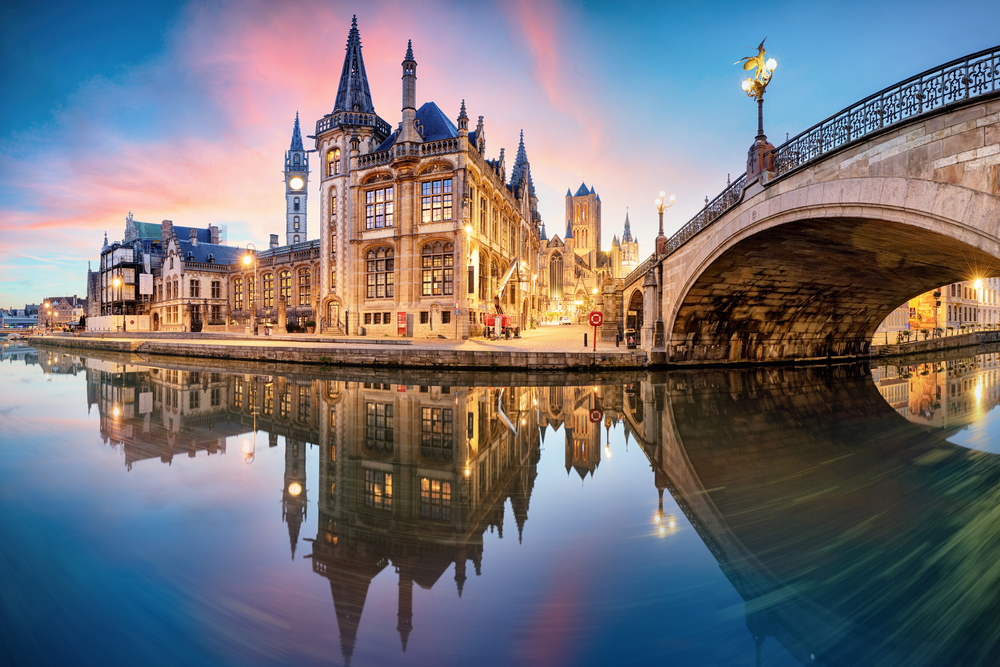 Ghent is a city and a municipality in the Flemish Region of Belgium. It is the capital and largest city of the East Flanders province, and the third largest in the country, exceeded in size only by Brussels and Antwerp. It is a port and university city. The city originally started as a settlement at the confluence of the Rivers Scheldt and Leie and in the Late Middle Ages became one of the largest and richest cities of northern Europe, with some 50,000 people in 1300. 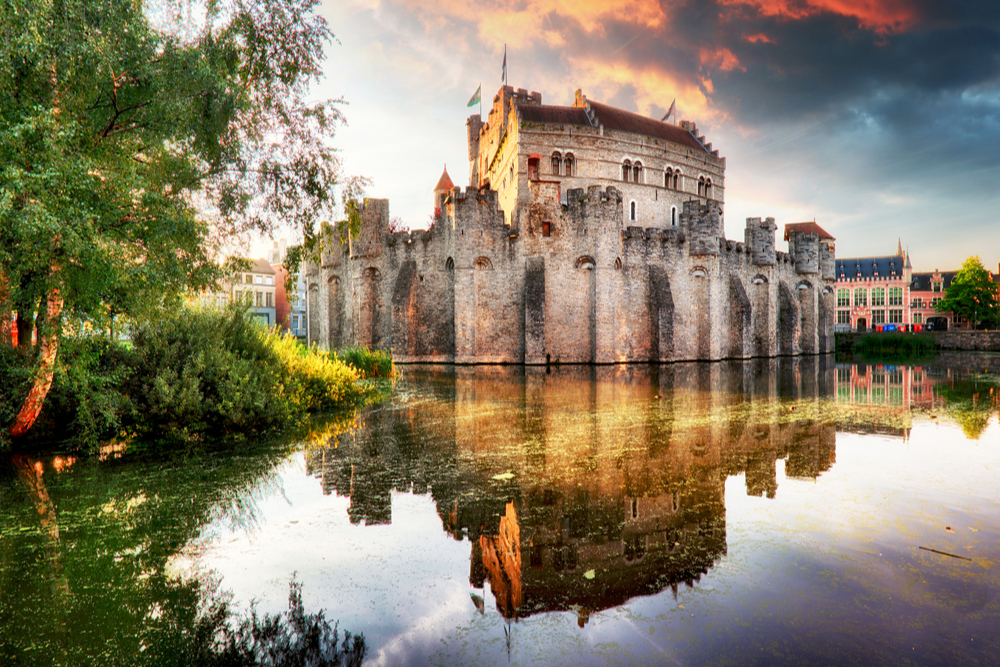 The Gravensteen (Dutch; literally "Castle of the Counts") is a medieval castle that dates from 1180 and was the residence of the Counts of Flanders until 1353. It was subsequently re-purposed as a court, prison, mint, and even as a cotton factory. It was restored over 1893–1903 and is now a museum and a major landmark in the city. 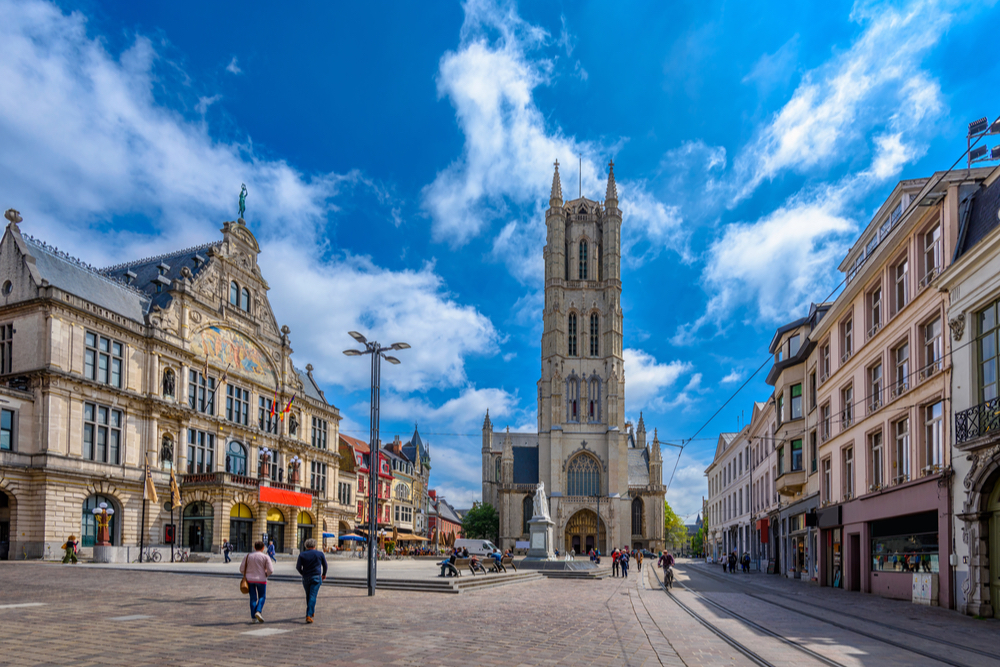 Saint Bavo's Cathedral, also known as Sint-Baafs Cathedral, is a cathedral of the Catholic Church. The 89-meter-tall Gothic building is the seat of the Diocese of Ghent and is named for Saint Bavo of Ghent. It contains the well-known Ghent Altarpiece. 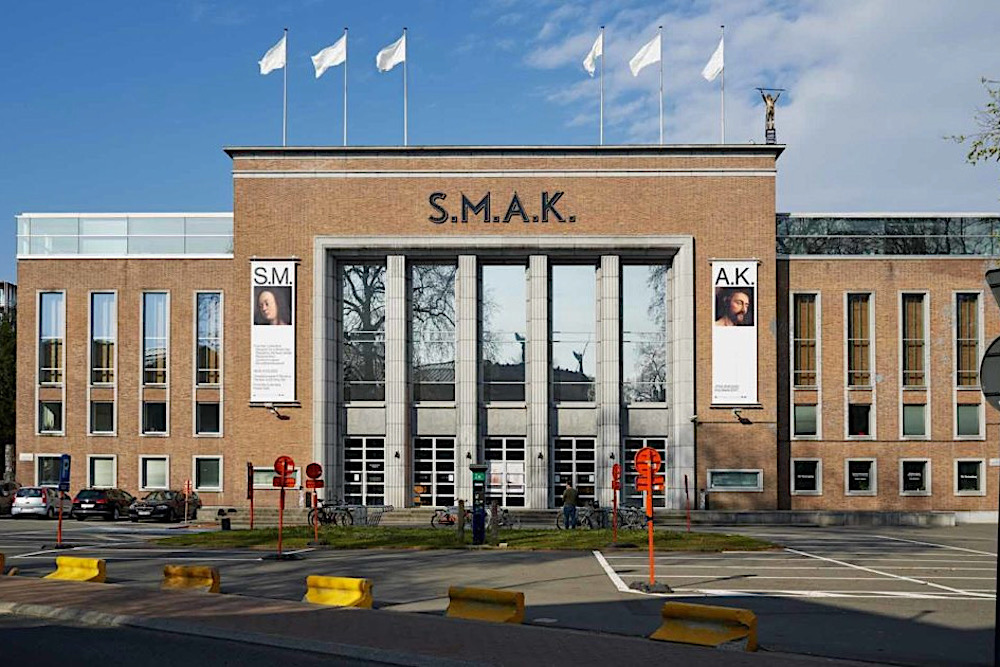 S.M.A.K., the Municipal Museum of Contemporary Art - Ghent, has an international reputation due to its collection and several impressive exhibitions. 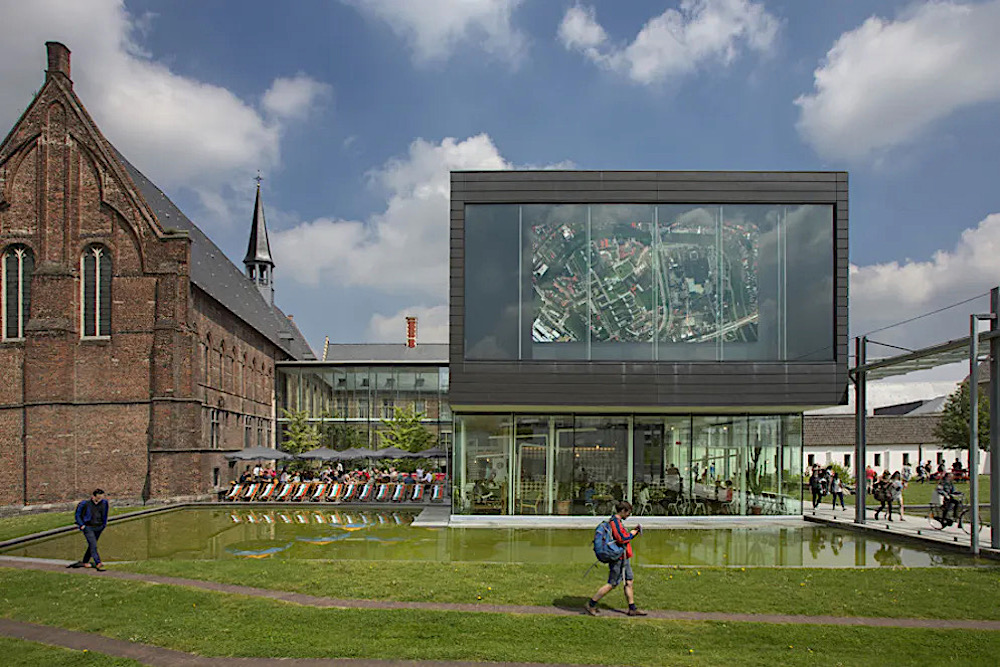 The Ghent City Museum (in Dutch "Stadsmuseum Gent", "STAM" in short) is a museum that exposes the city history and opened its doors on 9 October 2010. 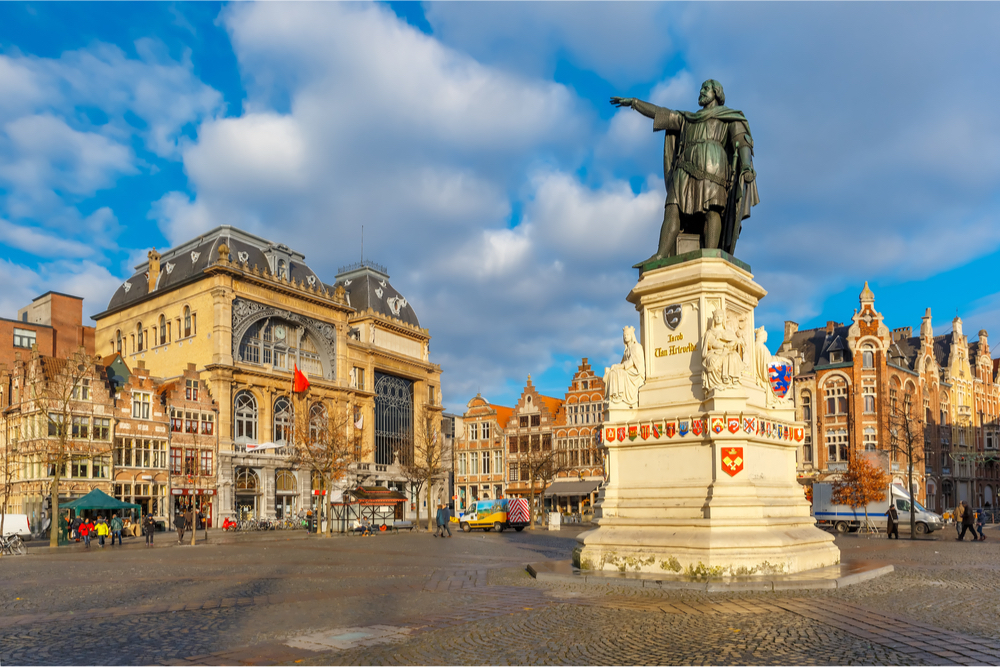 Vrijdagmarkt is a city square in the historic center named after the weekly tradition to stage a market every Friday morning. As one of the oldest squares in Ghent, it played an important role in the city's history. With its dimensions of roughly 100 by 100 m, it is one of the largest public squares in Ghent. Every Friday morning the square is filled with market stalls; a tradition dating back to 1199. The centerpiece of the plaza is the statue of Jacob van Artevelde, Ghent's wise man who sided with England during the Hundred Years' War and was murdered on the site in 1345. 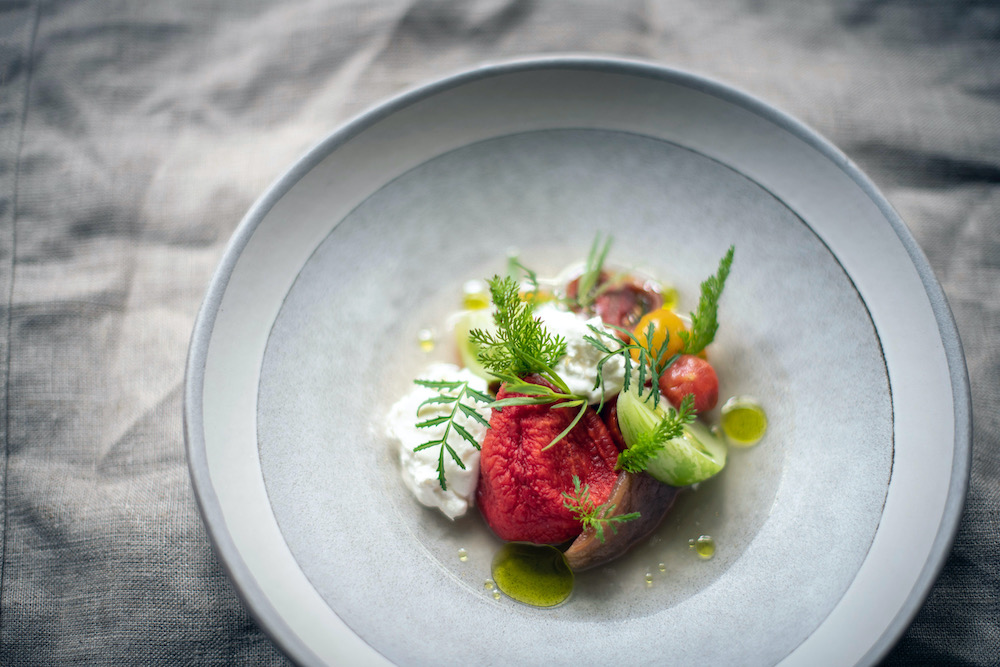 Located in the historic heart of Ghent, Heritage serves an exceptional cuisine full of fresh, local and seasonal ingredients. Take delight in a wide array of unique dishes, each one inspired by the true heritage of Ghent, and create your own menu. Or let the chef choose what you're having for dinner.

WHEN TO GO: Belgium is a year-round destination and the best time to visit depends on your own personal tastes.

CURRENCY: The euro is the official currency of Belgium, which is a member of the European Union. 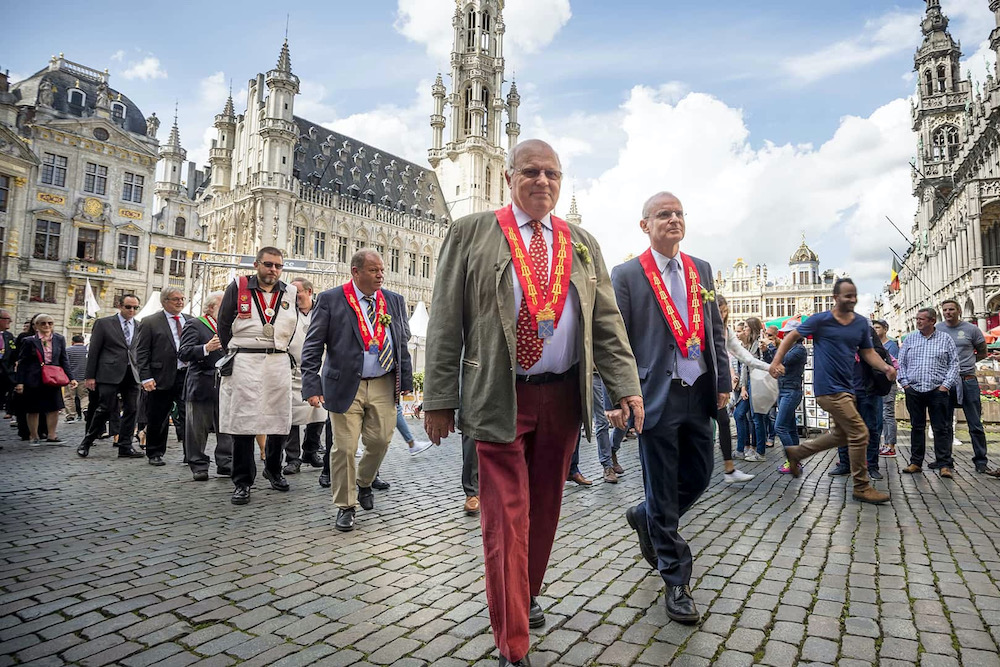 Beer Secret offers carefully crafted Belgium beer tasting experiences and tours designed to help guests get a taste for an authentic Belgium culture, through their love and passion for all-things-beer. Their Belgium Beer Tours are small, intimate beer tastings and their Belgium Brewery Tours allow you to discover how artisanal beer is brewed, Belgian-style. 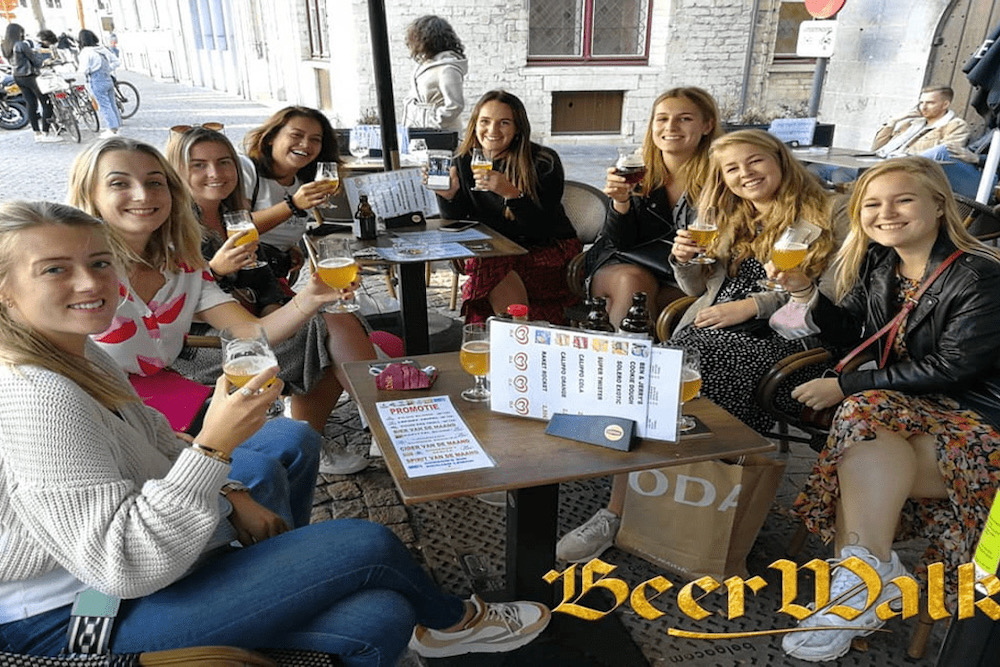 Discover Flemish cities and taste their unique craft beers during a beer walk with professional guides. Get a tour and taste the best Belgian beers. Beerwalk offers tours in 7 cities - Antwerp, Bruges, Brussels, Ghent, Louvain, Kortrijk and Mechelen - go to their website and book direct for the best price.