Durban (Zulu: eThekwini, from itheku meaning 'the port' also called Zulu: eZibubulungwini for the mountain range that terminates in the area), nicknamed Durbs, is the third most populous city in South Africa after Johannesburg and Cape Town and the largest city in KwaZulu-Natal. Durban forms part of the eThekwini Metropolitan Municipality, which includes neighbouring towns and has a population of about 3.44 million, making the combined municipality one of the largest cities on the Indian Ocean coast of the African continent. 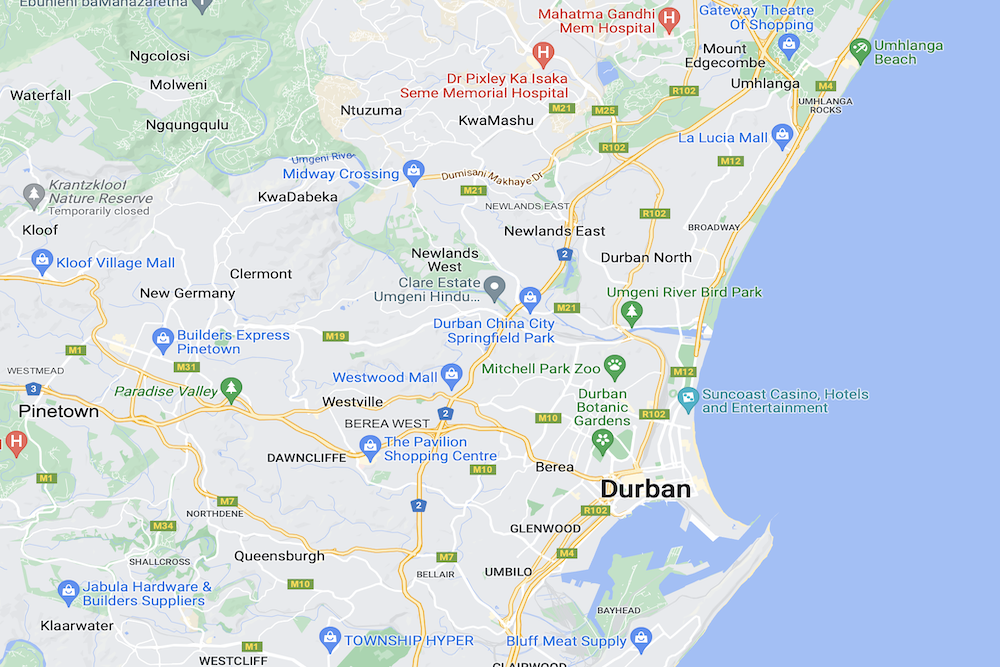 EXPERIENCE THESE 14 AWESOME ATTRACTIONS IN DURBAN: 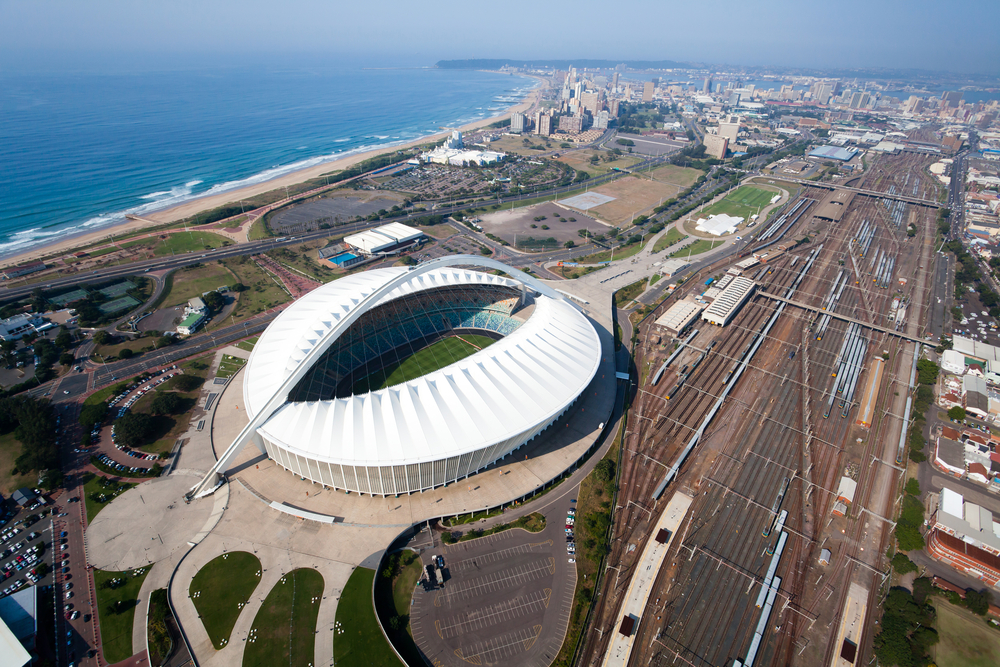 The Big Rush Big Swing has been officially named the world’s tallest swing by the Guinness Book of Records since 14 May 2011. Not your average swing, the aptly named Big Swing allows you to take the thrilling leap swinging out into a massive 220m arc where you soar into the centre of the stadium. 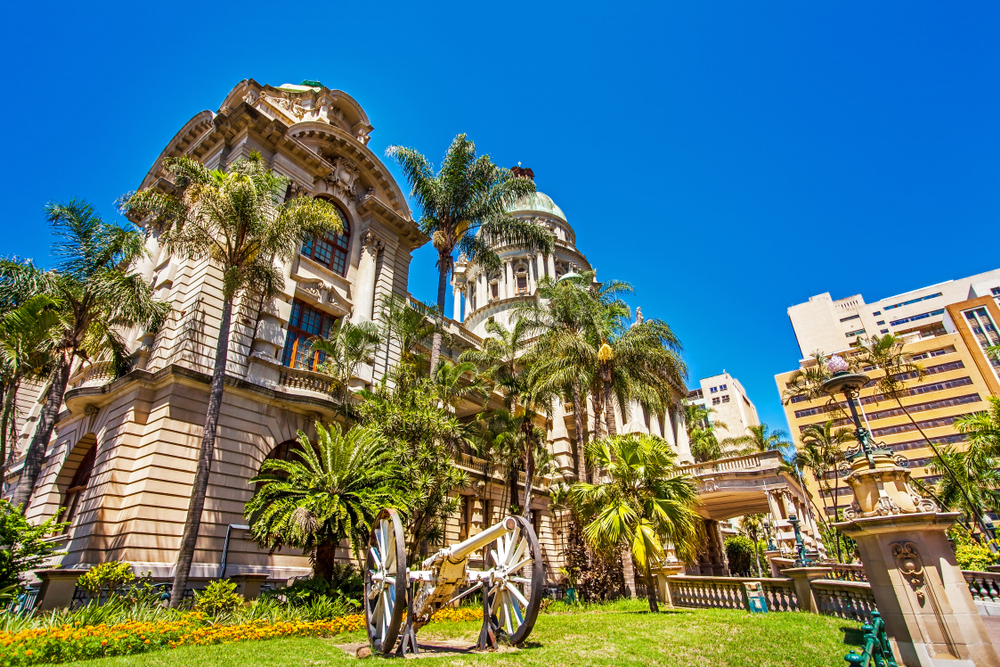 Durban Art Gallery is a municipal art gallery established in Durban in 1892. It is run by eThekwini Metropolitan Municipality. It exhibits cover carvings, clay pots and beadwork, as well as the works of artists like Andrew Verster and Penny Siopis. 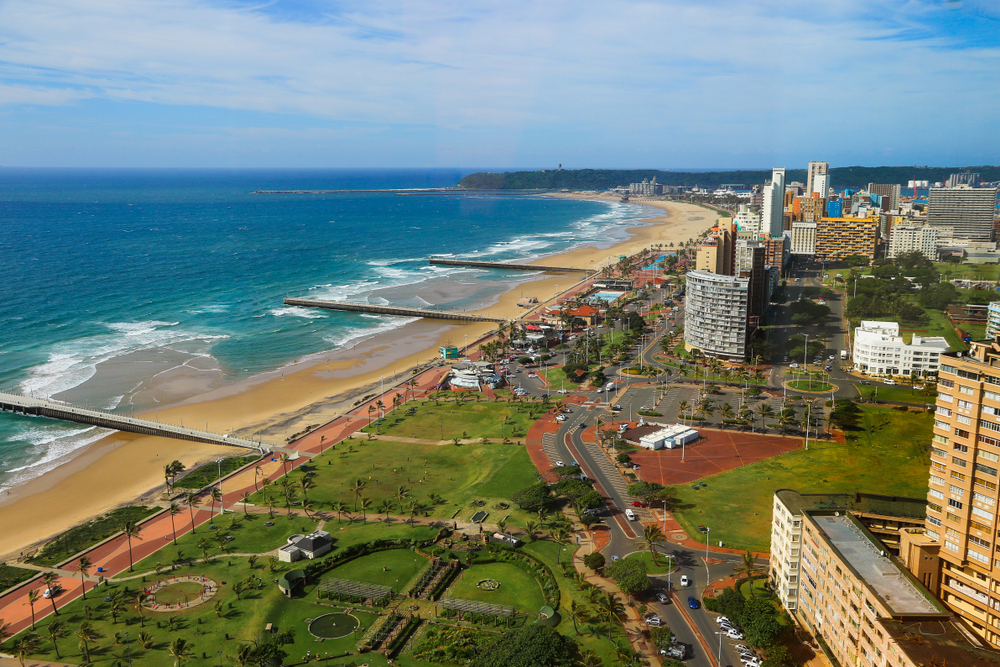 The beachfront promenade is the longest in sub-Saharan Africa at over 8km and stretches from Blue Lagoon to the Durban Harbour mouth. The new section, located between the harbour mouth and uShaka Marine World, is wheelchair-friendly. 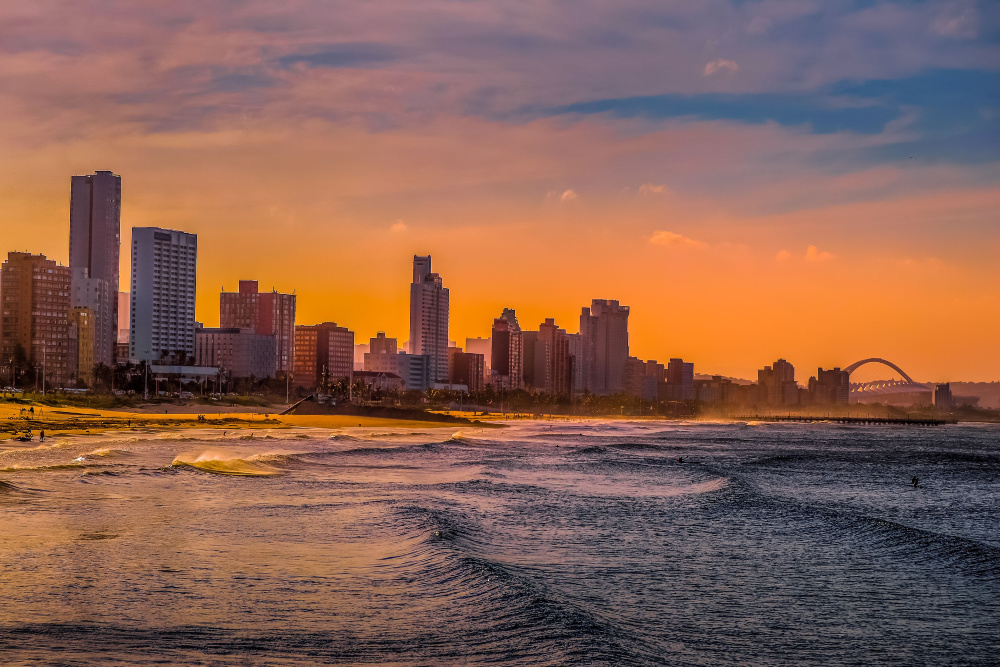 The Golden Mile (colloquially, "The Mile") is the popular stretch of beachfront, including the promenade that runs along with it. It runs roughly from uShaka Beach (where the uShaka Marine World is located) in Point Waterfront to Suncoast Casino and Entertainment World in the north and now includes a route directly to Moses Mabhida Stadium. t is one of the main tourist attractions in the Durban area. The wide stretch of golden sands, artificially separated by various piers, provides excellent opportunities for sun-worshippers and swimmers to enjoy the sub-tropical sunshine and warm waters of the Indian Ocean. Most of the Mile's beaches are protected year-round by lifeguards and shark nets. 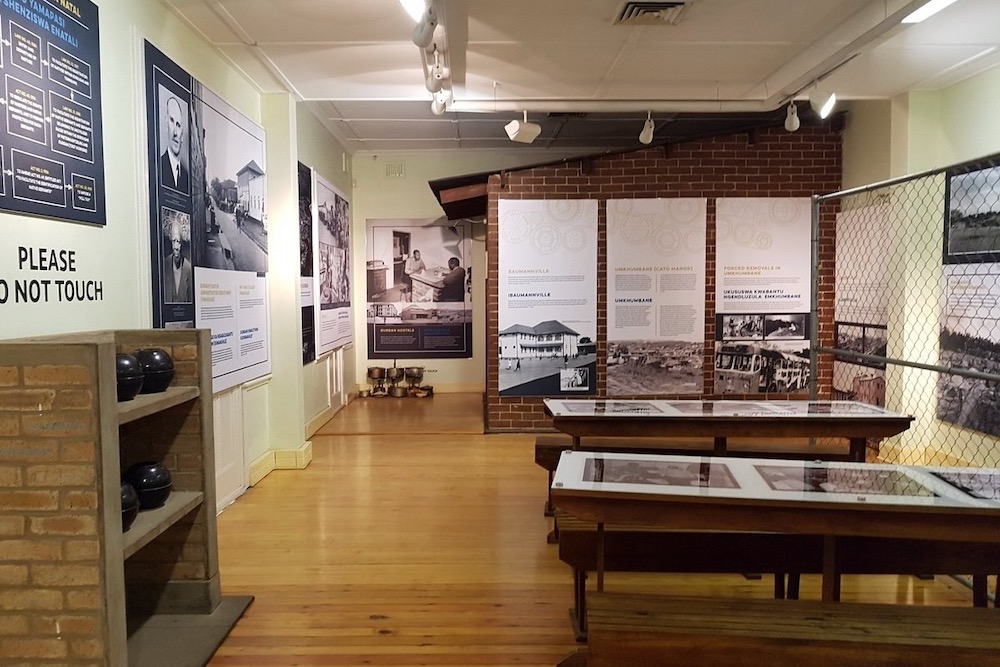 Kwa Muhle Museum has a distinctive architectural design and was once the headquarters of the city’s Native Administration Department of labour control. It was built to accommodate people who moved to the city in search of jobs. The Museum exhibits the history and reality of what people went through in the 20th century and it documents Durban’s urban growth and history of its residents. The museum is one of the 4 that constitute Durban’s local history museums. The others are the Old Court House Museum, Old House Museum and the Port Natal Maritime Museum. 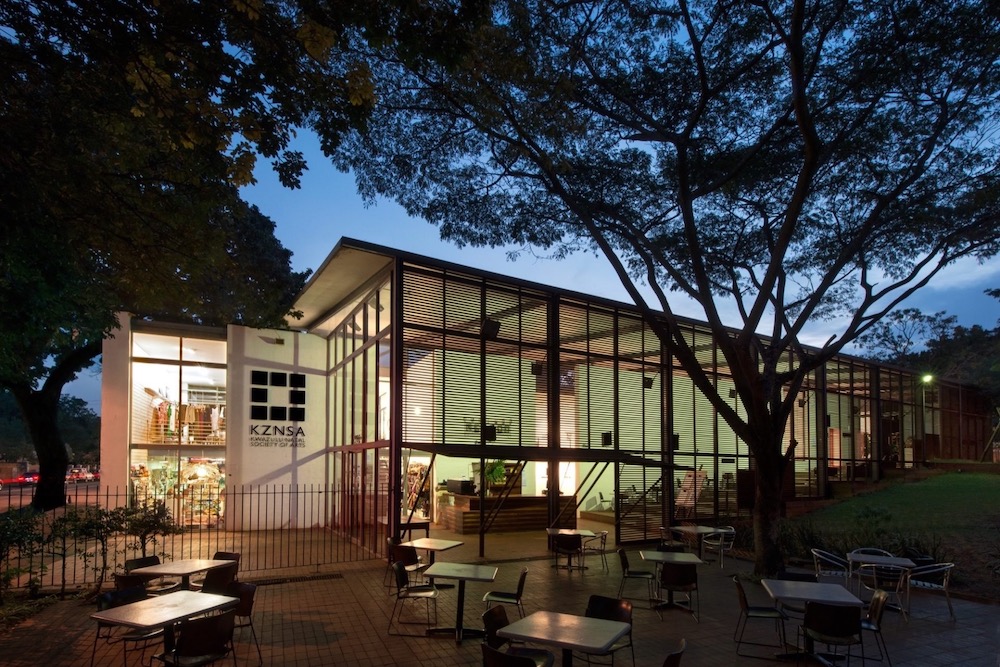 Founded in 1902, the KZNSA is KwaZulu-Natal’s foremost contemporary gallery, hosting artists of national and international stature, and reflecting the vibrant creative heart of the province. 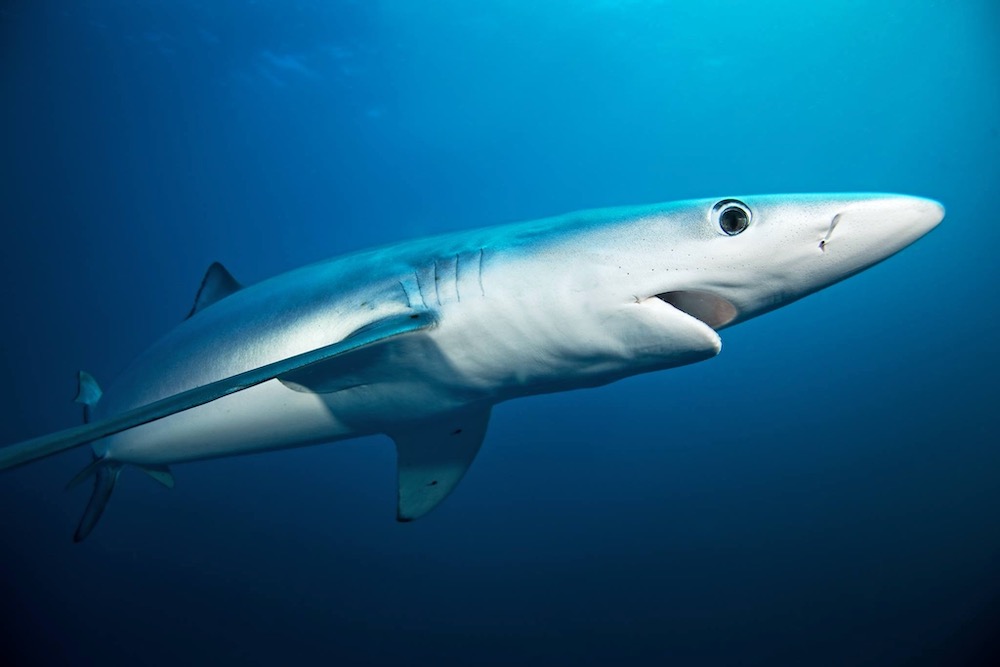 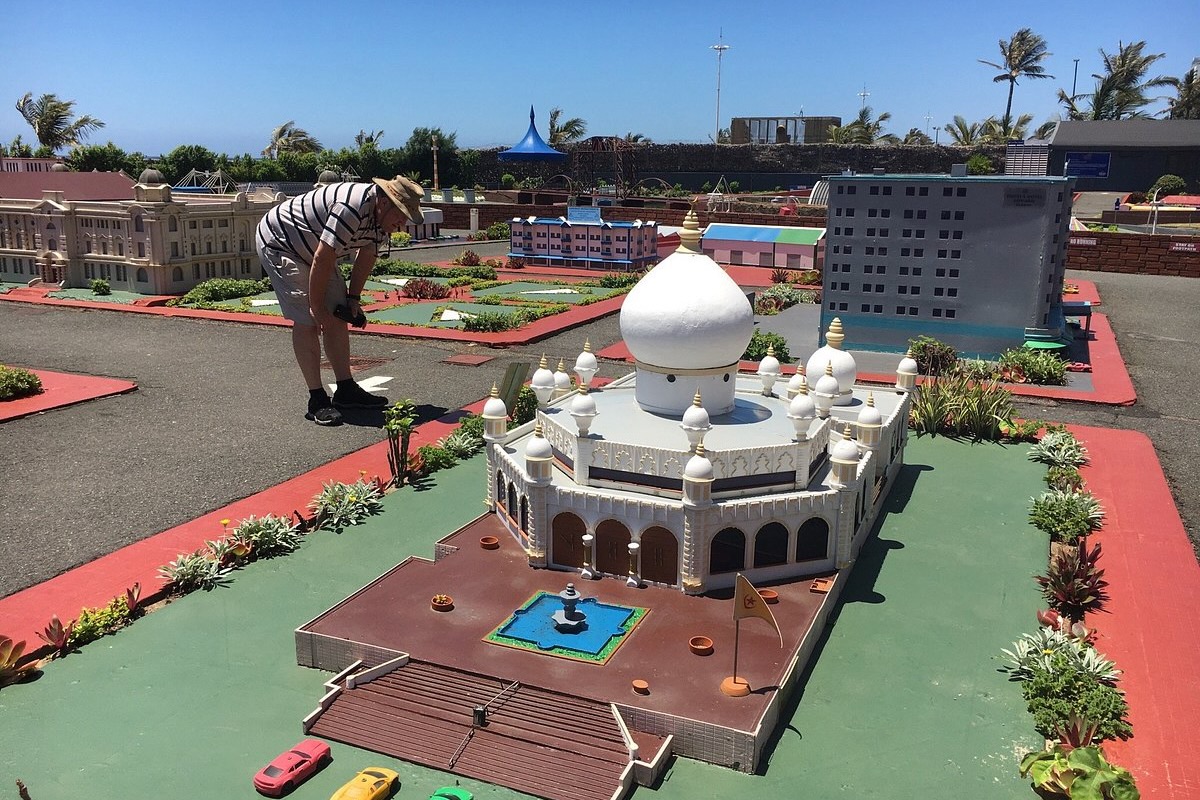 Minitown has been in existence since January 1969 and is a typical S.A. Coastal City, built to the scale1:24 of full actual size. It is not a model of Durban, but there are a number of Durban buildings. 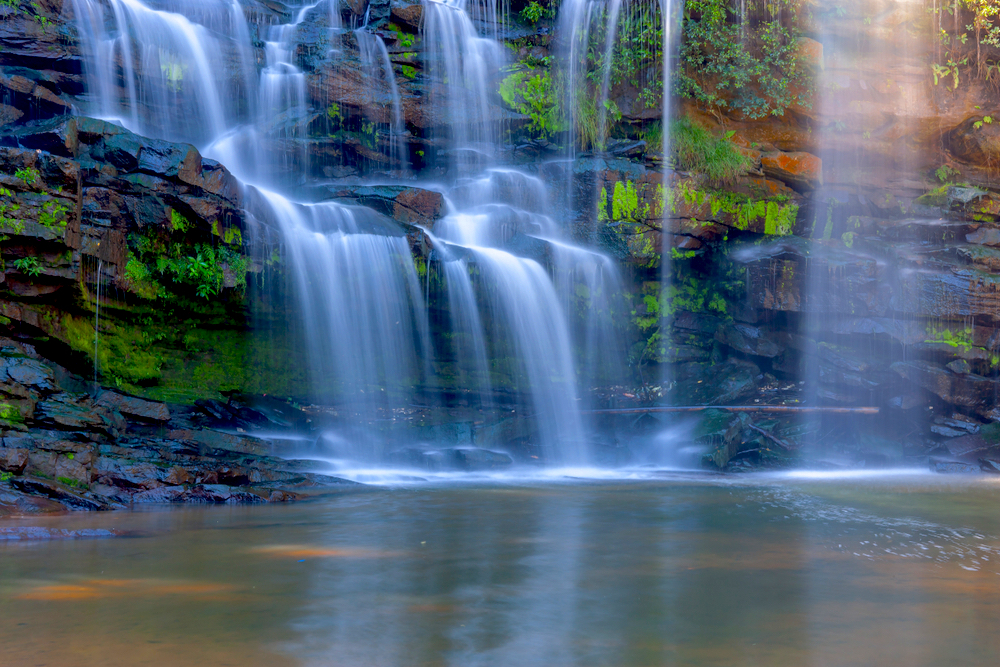 The Paradise Valley Nature Reserve, 100 hectares of coastal and remnant grassland, boasts one of the two national monuments to be found in Pinetown – The Umbilo Waterworks, which were built in 1887. All four of the trails in the reserve start at the Interpretive Centre and head down through the picnic area. 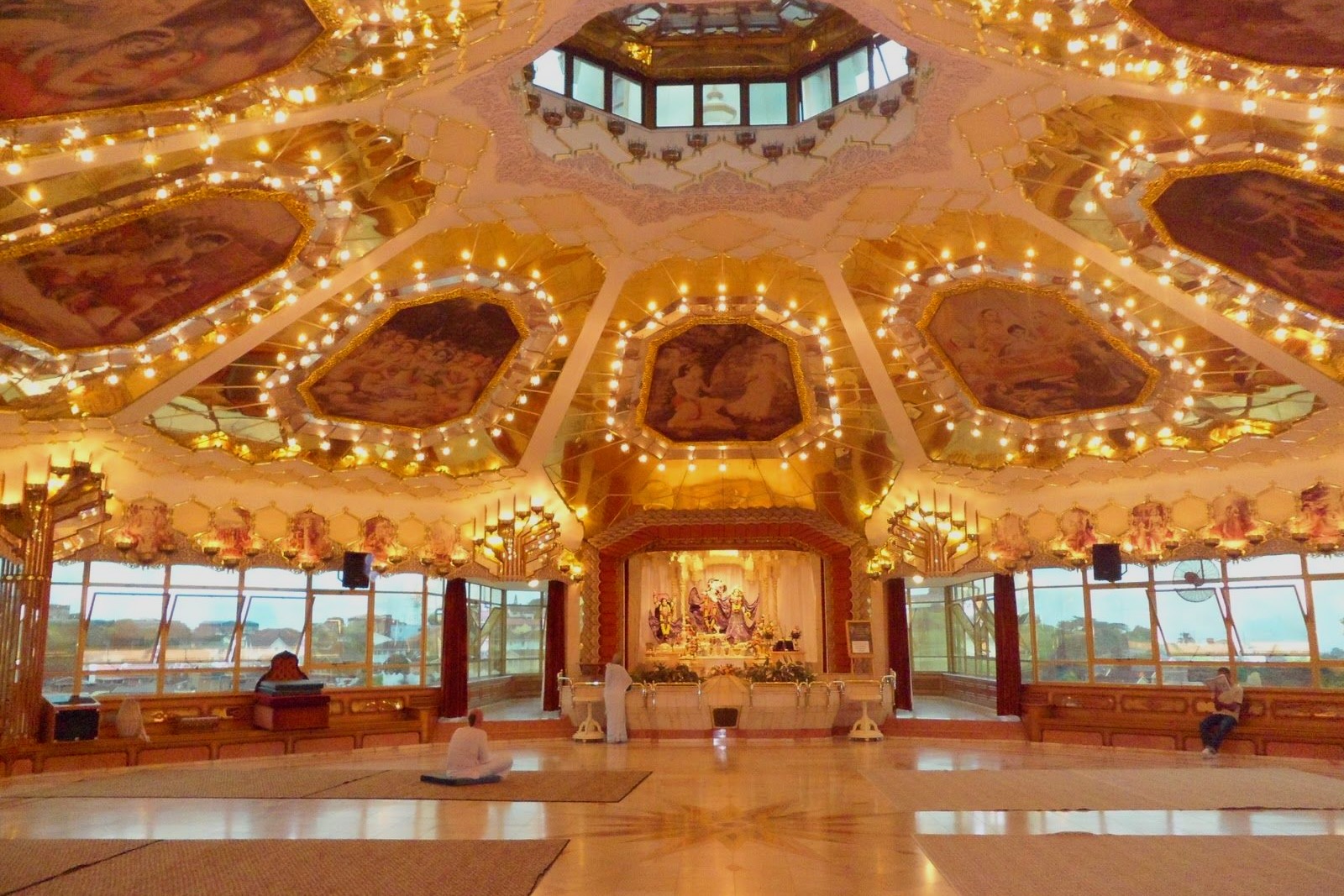 The Sri Sri Radha Radhanath Temple (Hare Krishna Temple) is stunning to behold and a fascinating place to learn about this mystical sect of Hinduism. Opened in 1985, its three domes of white and gold rise above a dazzling octagonal roof.  Its design is a combination of the traditional, contemporary and futuristic; and simultaneously a fusion of concepts showcasing “east meets west”. There is a geometrical lay-out with circles, triangles, squares and octagons, holding spiritual symbolism. It is set in a moat of water surrounded by a lotus shaped garden. 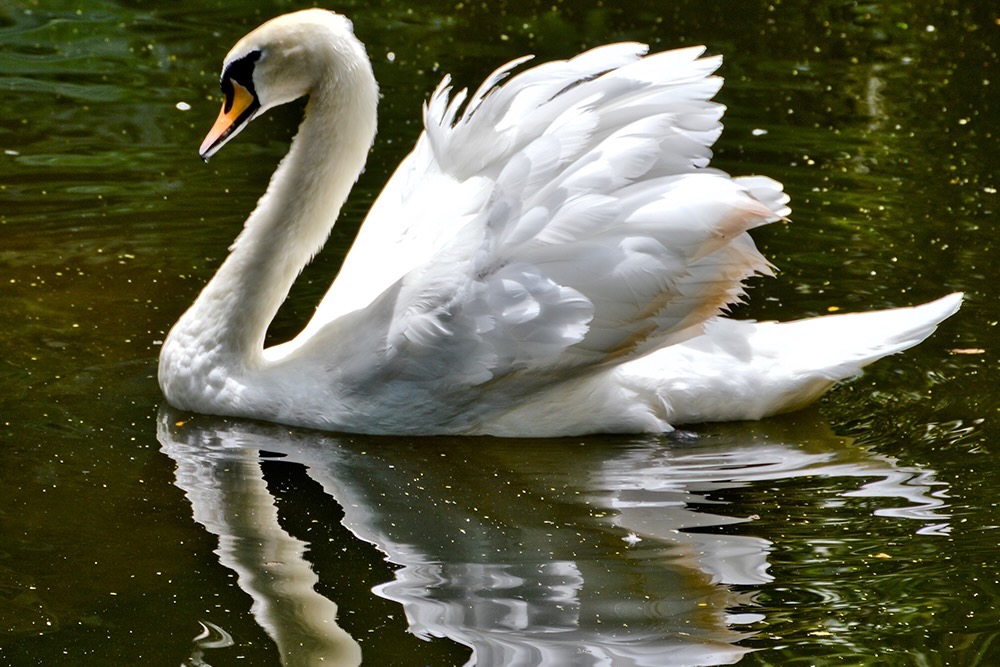 The Umgeni River Bird Park was designed and built by Dr Alan Abrey. It is situated in an old quarry site which used to contain water and was visited by Alan as a young boy growing up in Durban. When looking for a bird park site, he remembered it as a perfect option. After a year of extensive land filling, landscaping and aviary construction, the Umgeni River Bird Park was opened in April 1984. The park is situated in 3.5 hectares of lush tropical landscaping and houses an ever-increasing collection of more than 800 birds from 200 species. Some species are the only representatives of their kind in Africa whilst others are commonly kept as pets. 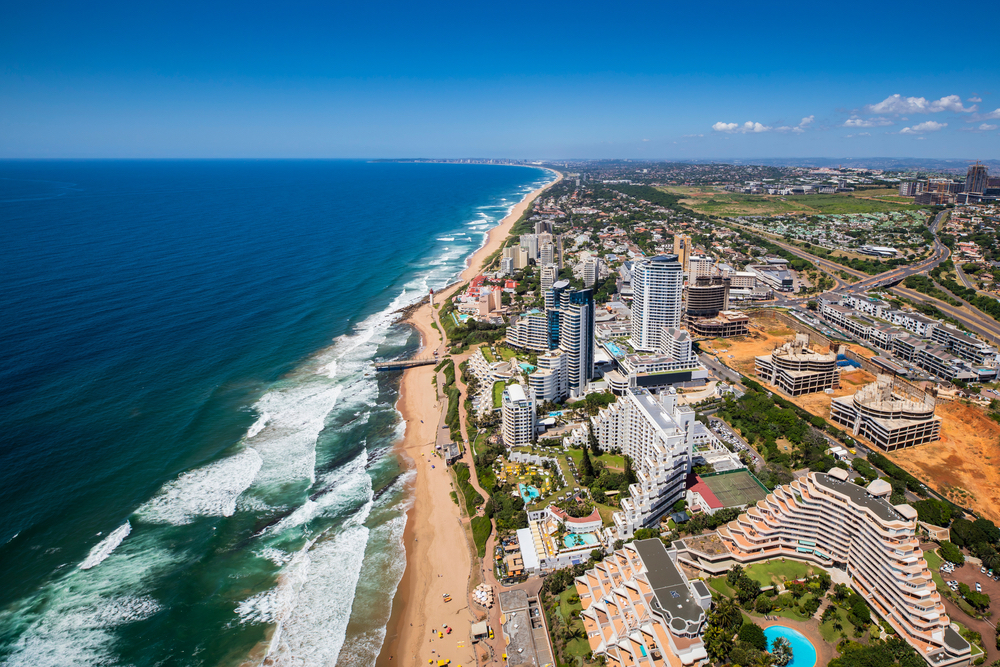 Umhlanga is perfectly situated just north of of Durban. It's only ten minutes south of King Shaka International Airport. It faces the warm waters of the Indian Ocean and its beautiful coastline attracts visitors from around the world. 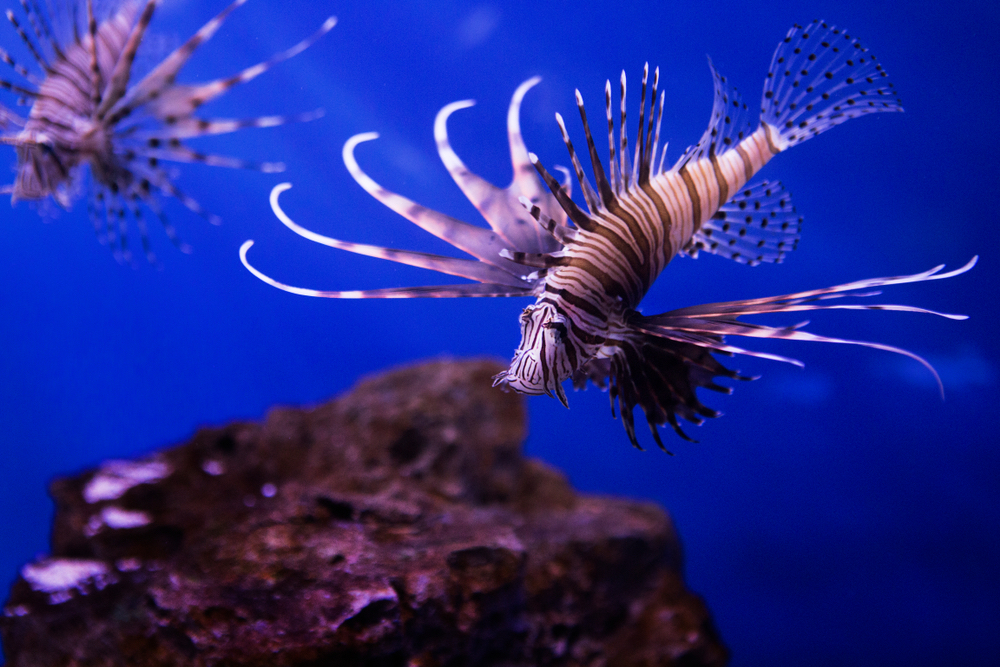 WHEN TO GO: Durban is known for its tropical climate and to be pretty hot and humid in the summer, with a very mild and pleasant winter. The best time to visit Durban is in winter (April – August / September). Temperatures range from 14 – 24 degrees, rainfall eases off, and skies are mostly blue and sunny.

SLEEP AT THE CAPITAL PEARLS 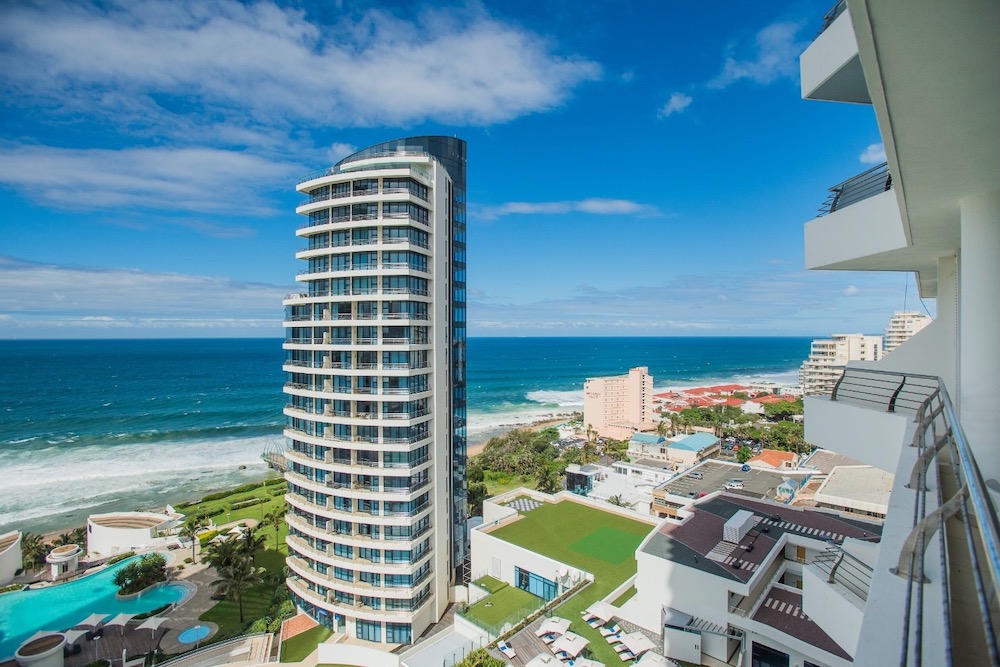 Step out, and you step into the luxury of a private mall, the Umhlanga Pier & Lighthouse, and the many other local restaurants at the shores of the coastline.

SLEEP AT THE CAPITAL ZIMBALI 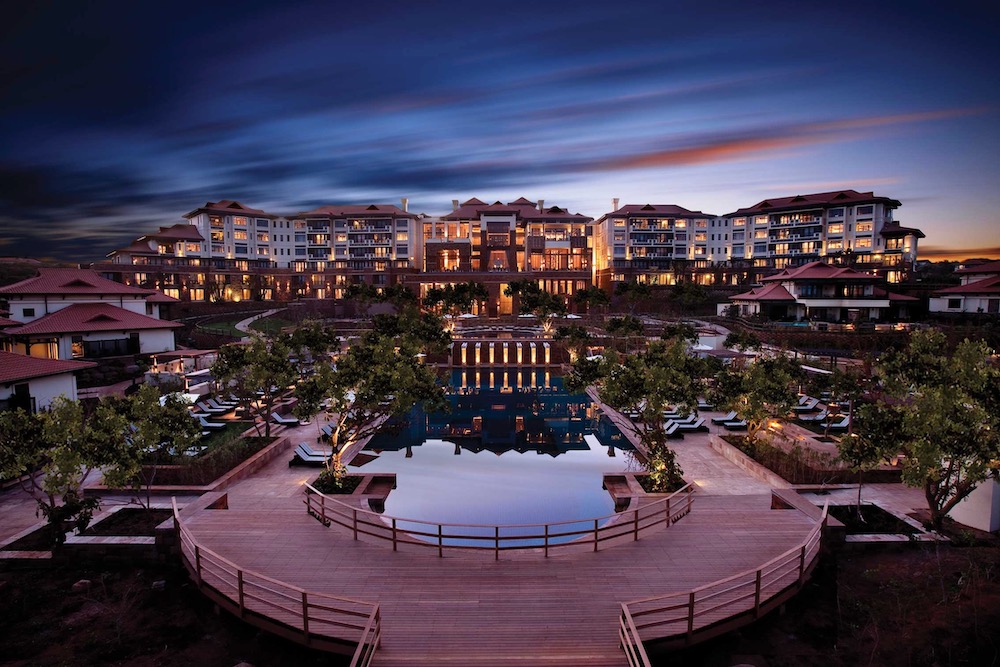 Located in a luxury eco estate with insanely beautiful Indian Ocean views, less than fifteen minutes from King Shaka International Airport, The Capital Zimbali Resort is easily accessible and feels like you have arrived at a utopian paradise! Set in a tropical forest that unfurls into the ocean, the resort blends organically into a lush natural landscape.

SLEEP AT THE OYSTER BOX 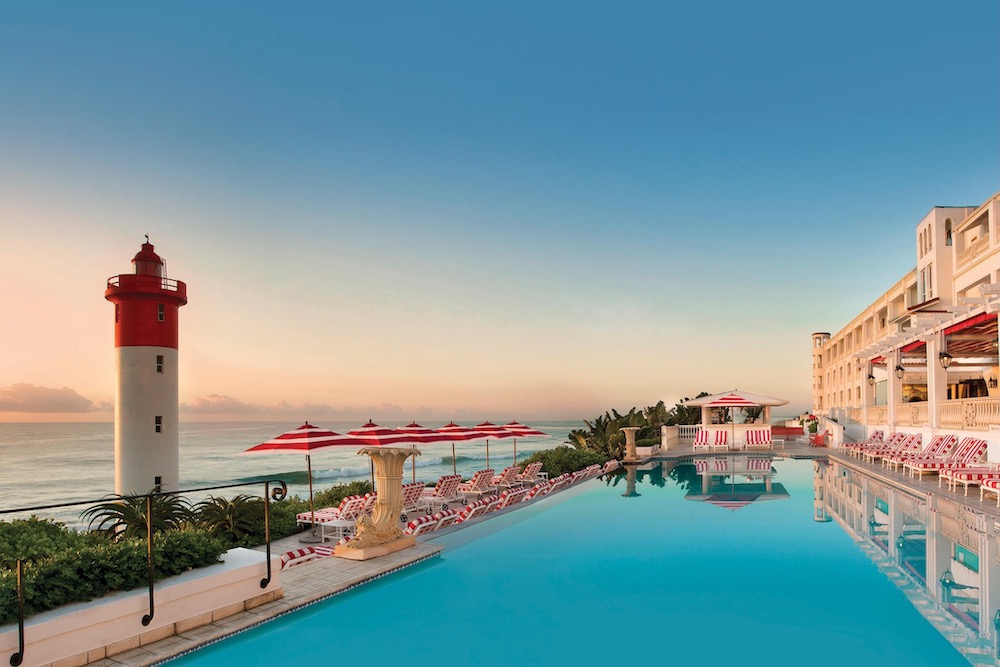 Occupying a majestic location on the Umhlanga beachfront in KwaZulu-Natal province, The Oyster Box is one of South Africa’s most celebrated hotels, as famous for its remarkable coastal views as the understated luxury and gracious hospitality that have become the hallmarks of this cherished seaside destination. The Oyster Box’s Presidential Suite is well known as the best hotel room in South Africa.

EAT AT THE GRAND EXOTIC

The Grand Exotic is a sensory delight. It transports you to a nostalgic era of glory days gone by. From the dome to the hand painted glass and art work adorning the walls at every turn, this is fast becoming The Jewel of the KZN North Coast. It is tranquil and a place to meet friends. (Regretably the decor, ambiance and facilities do not cater for children, and they have a no under teen policy).

PLAY AT DURBAN SAFARI AND TOURS 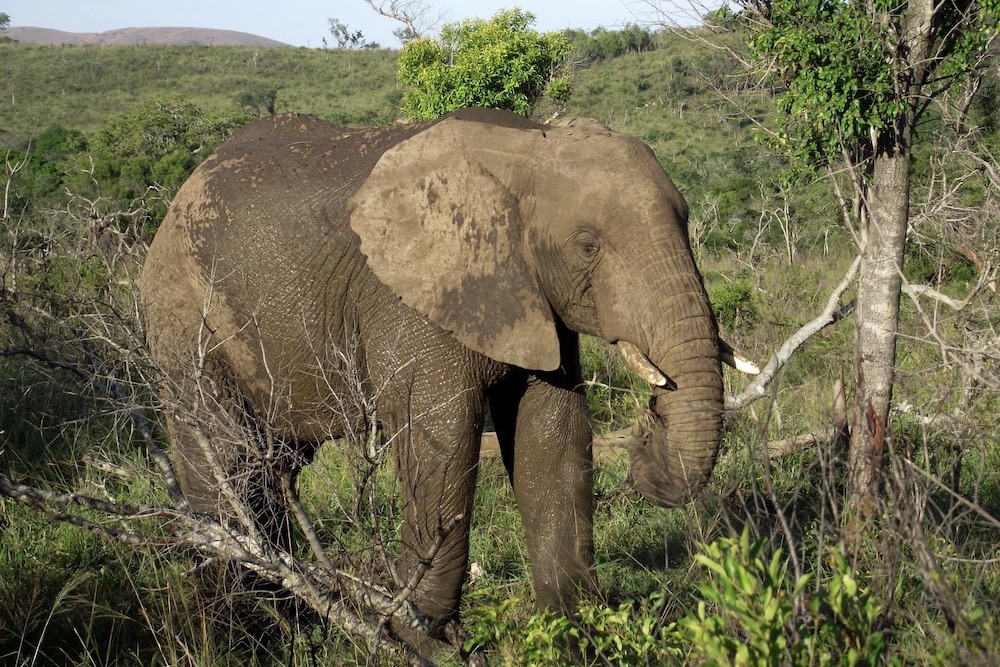 Durban Safaris and Tours offer a range of pre-planned itineraries that are designed to show off the best of KwaZulu-Natal and to ensure you have a safe, memorable and stress-free vacation. Their range of tours include day tours, overnight and multi-day tours. Their top rated tours - 3 Day Wildlife Safari Tour, Rorkes Drift Day Tour from Durban, Big 5 Safari Day Tour and Durban City Tour. 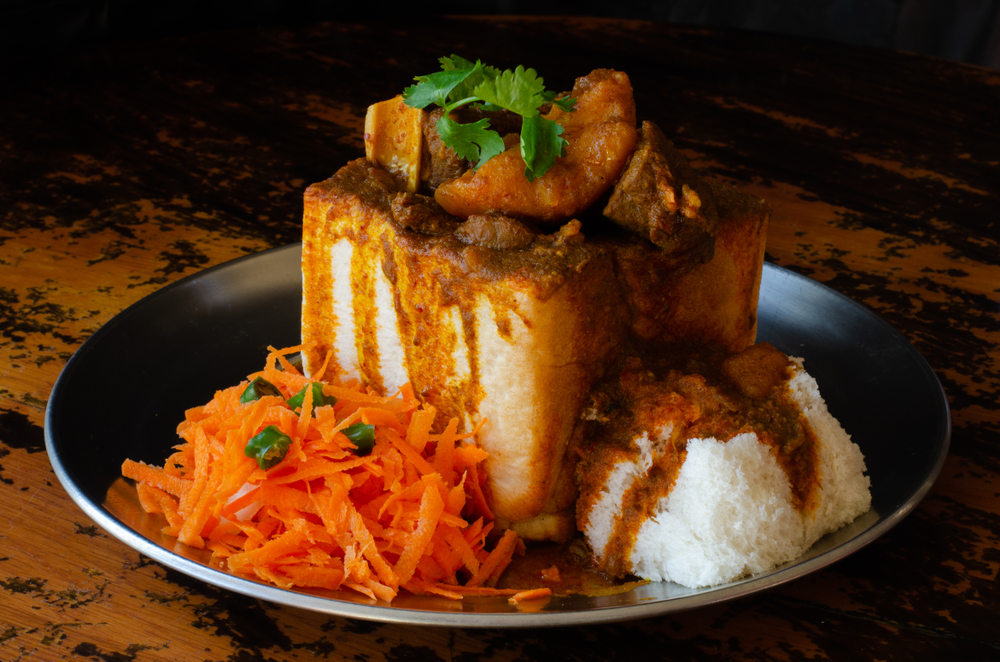 Bunny chow, often referred to simply as a bunny, is a South African fast food dish consisting of a hollowed-out loaf of white bread filled with curry and salad. It originated among Indian South Africans of Durban.