Discover the birthplace of the tango (part 1)

Tango is a dance that originated in the 1880s along the Río de la Plata, the natural border between Argentina and Uruguay. 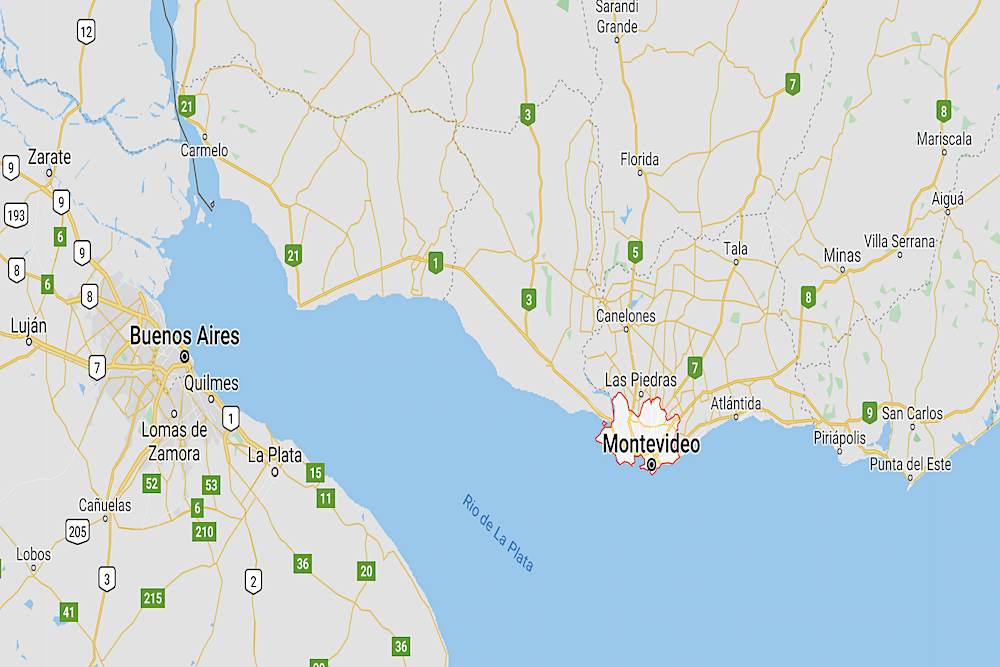 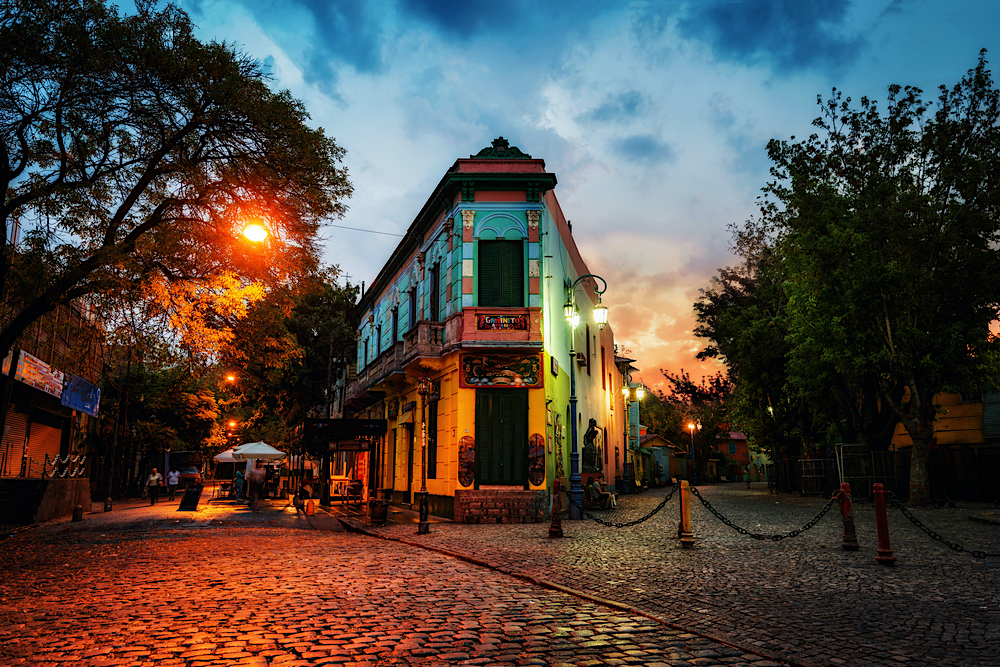 Buenos Aires is the capital and largest city of Argentina. The city is located on the western shore of the estuary of the Río de la Plata, on the South American continent's southeastern coast. "Buenos Aires" can be translated as "fair winds" or "good airs", the former was the meaning intended by the founders in the 16th century, by the use of the original name "Real de Nuestra Señora Santa María del Buen Ayre", named after the Madonna of Bonaria in Sardinia. Buenos Aires is packed with fantastic experiences, here are just a few: 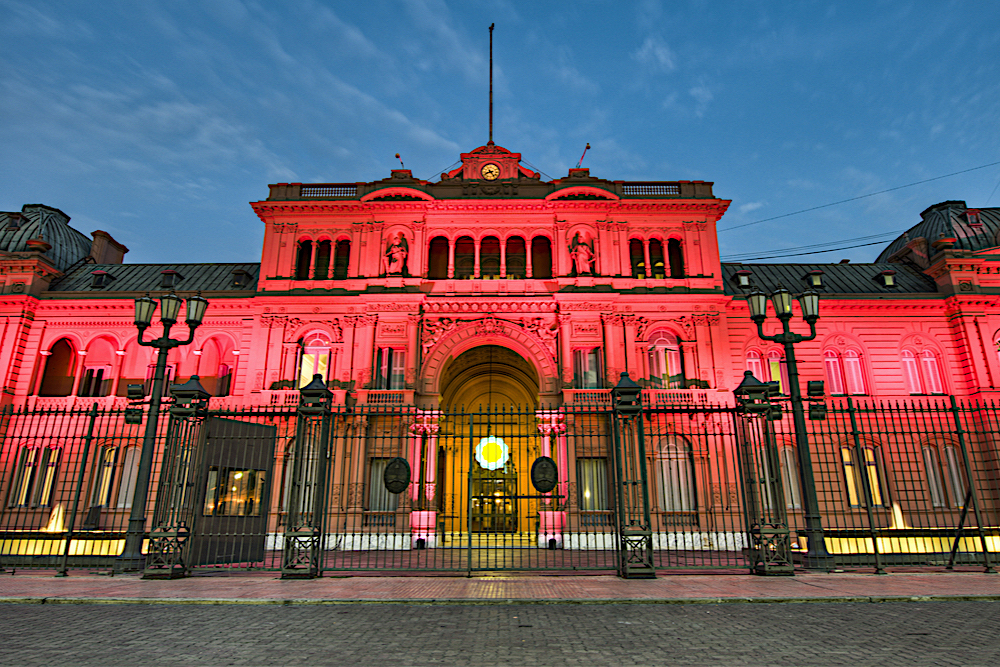 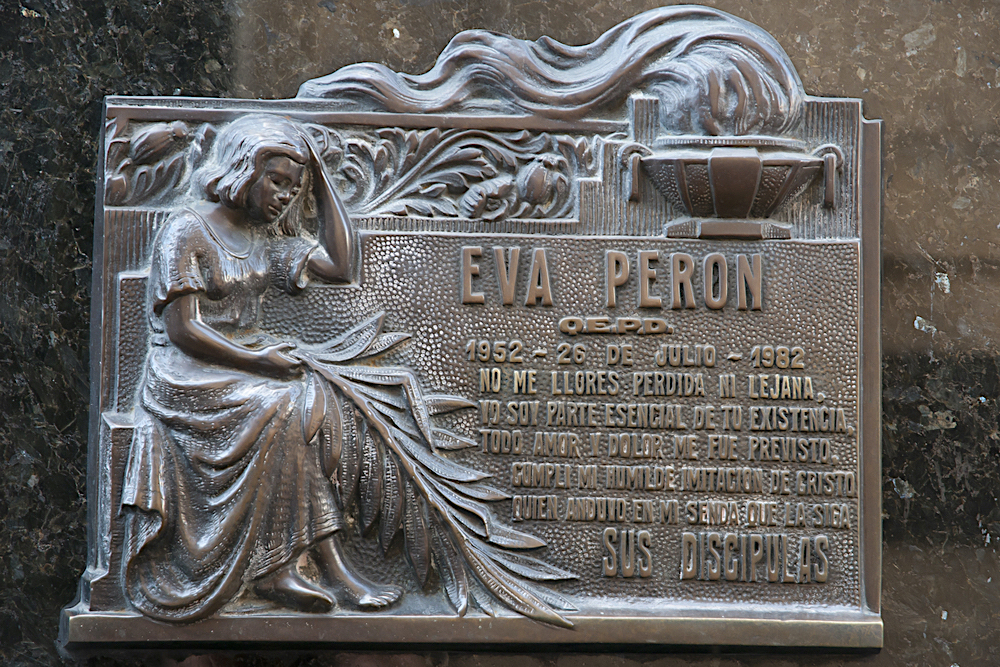 Tango singer Carlos Gardel is a national icon in Argentina. After his tragic death at the age of 45, he was interred at the Chacarita Cemetery, a vast necropolis in the suburbs of Buenos Aires, built in the 19th century after a yellow fever epidemic led to overcrowding of the existing cemeteries. La Recoleta Cemetery is a cemetery located in the Recoleta neighbourhood. It contains the graves of notable people, including Eva Perón, presidents of Argentina, Nobel Prize winners, the founder of the Argentine Navy, and a granddaughter of Napoleon.

3. EAT AT A PARRILLA 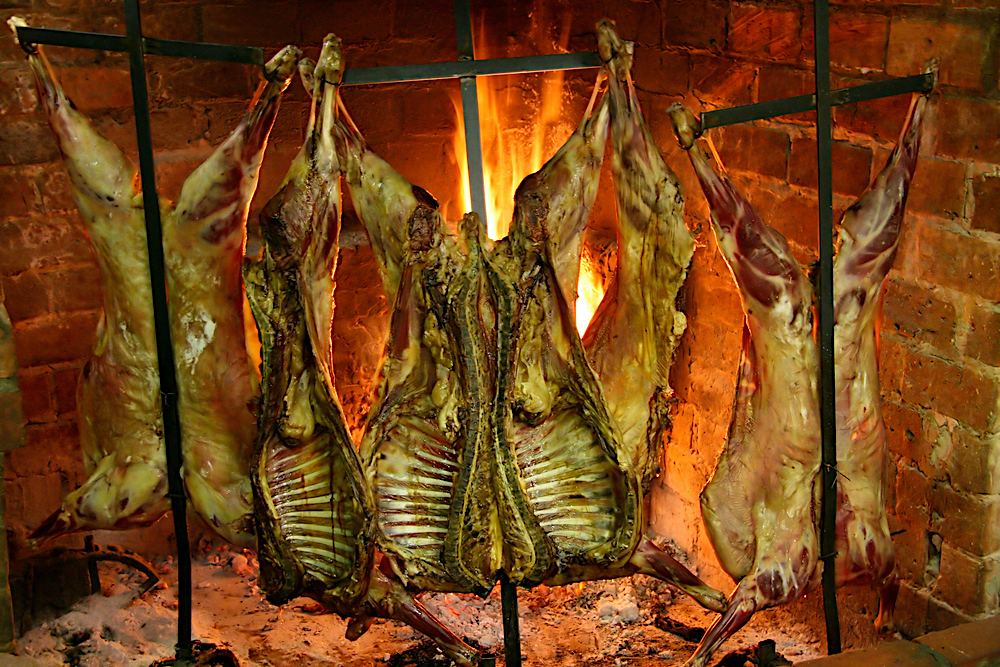 “Parrilla” means grill, and refers to the actual open-fire hearth and grates where meat is cooked. It also translates to “steakhouse,” or more fittingly, any establishment — from fine dining to street cart — that specializes in grilled meats. A meal or two at a parrilla is a must in Buenos Aires. 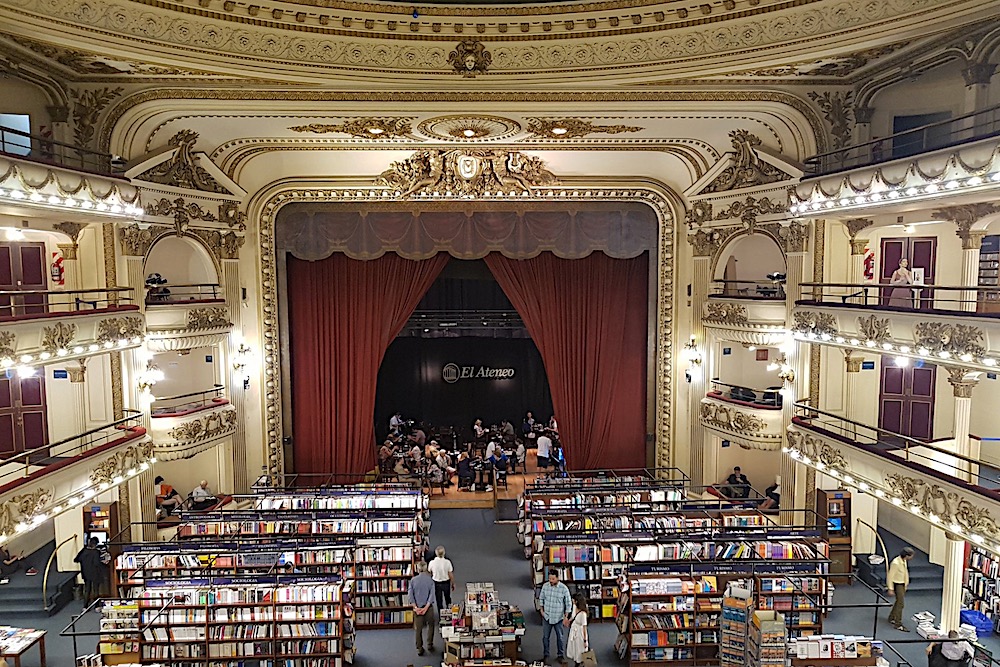 El Ateneo Grand Splendid is a bookshop in the Recoleta neighbourhood.  In 2019, it was named the "world's most beautiful bookstore" by the National Geographic. 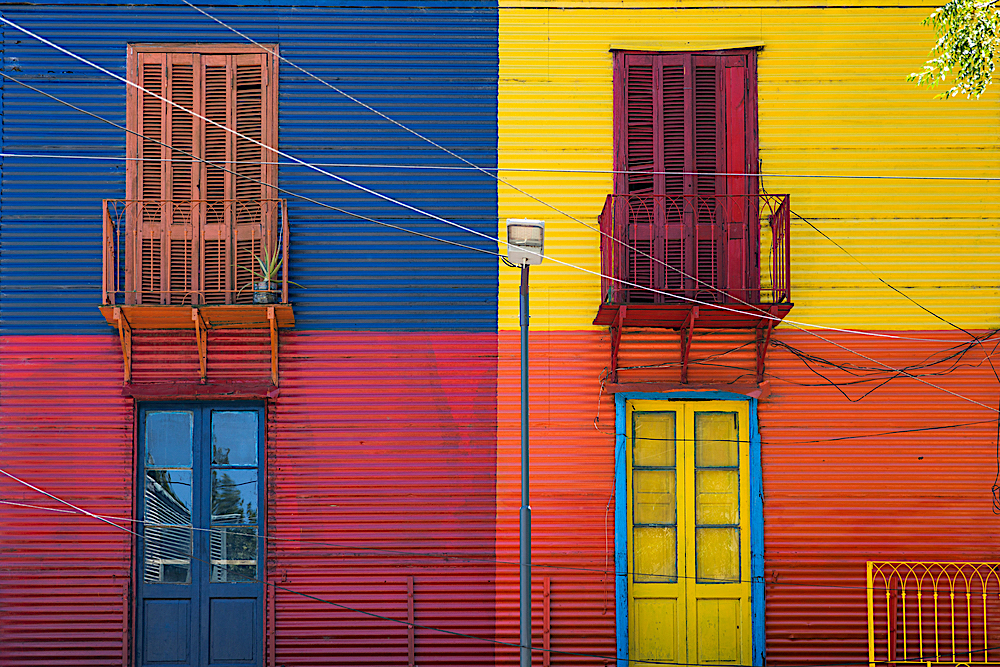 Caminito is a street museum and a traditional alley, located in La Boca, a neighborhood of Buenos Aires, Argentina. It acquired cultural significance because it inspired the music for the famous tango "Caminito", composed by Juan de Dios Filiberto. 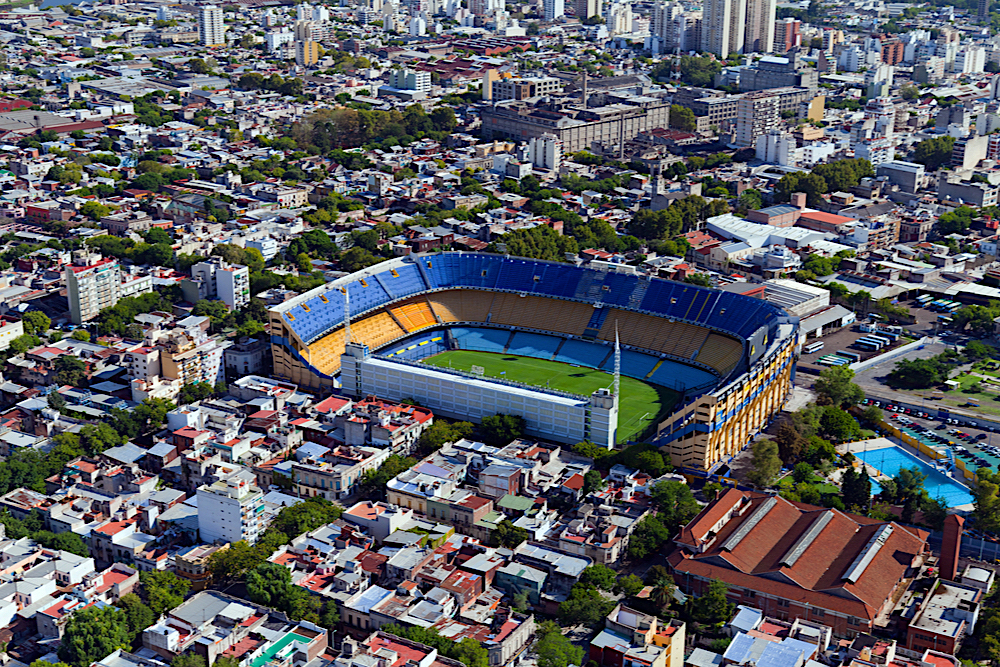 The Estadio Alberto J. Armando is an association football stadium located in La Boca district of Buenos Aires widely known as La Bombonera. It has a capacity of 49,000. The stadium is owned by Boca Juniors, one of Argentina's top football clubs. The stadium is widely regarded as one of the most emblematic stadiums of the world.The stadium, as well as being the home of Boca Juniors, who have over 16 million fans, is also used as a concert venue. 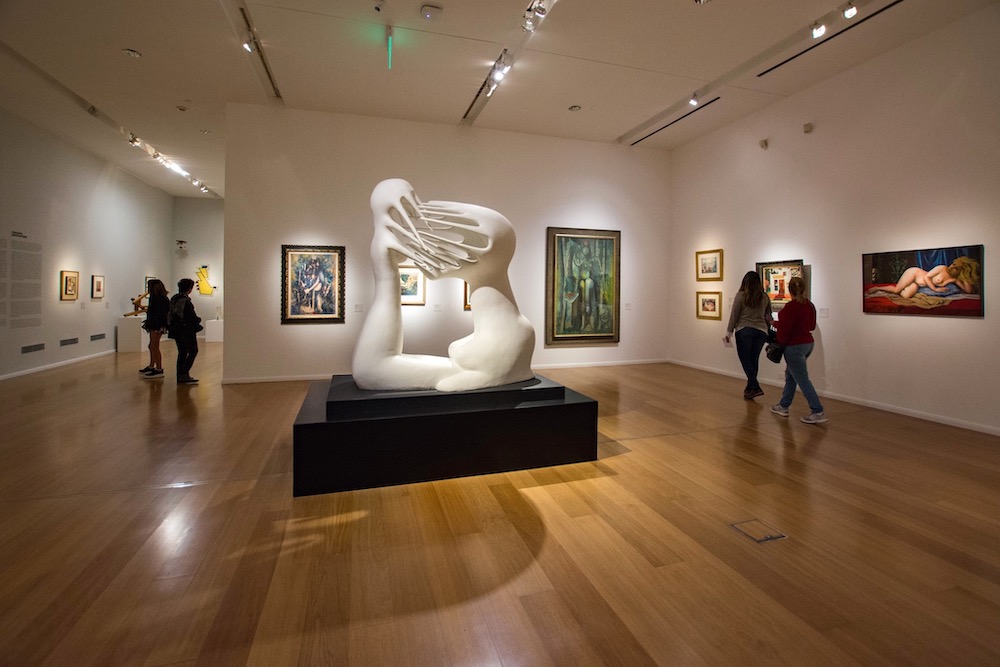 The Latin American Art Museum of Buenos Aires is a museum located on Figueroa Alcorta Avenue, in the Palermo section of Buenos Aires. Created by Argentine businessman Eduardo Costantini, the museum is operated by the not-for-profit Fundación MALBA – Costantini, and was inaugurated on September 21, 2001. 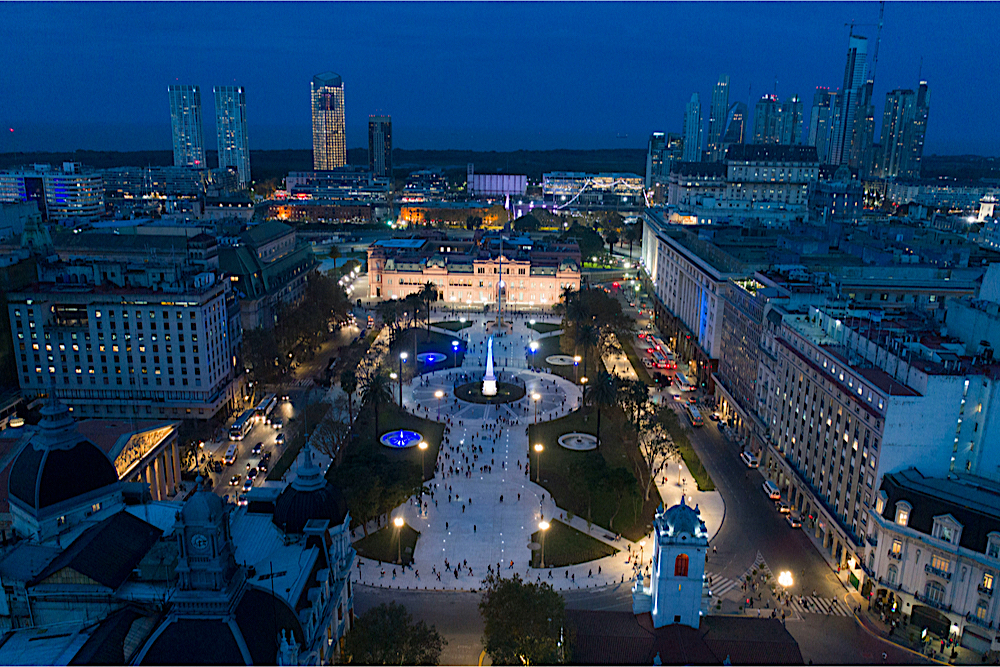 The Obelisco de Buenos Aires (Obelisk of Buenos Aires) is a national historic monument and icon of Buenos Aires. Located in the Plaza de la República in the intersection of avenues Corrientes and 9 de Julio, it was erected in 1936 to commemorate the quadricentennial of the first foundation of the city.

The Plaza de Mayo is widely considered to be the most important square in Argentina. The square takes its name from the 1810 May Revolution, which saw Buenos Aires declare itself independent from Spain, thus instigating the Argentine War of Independence. 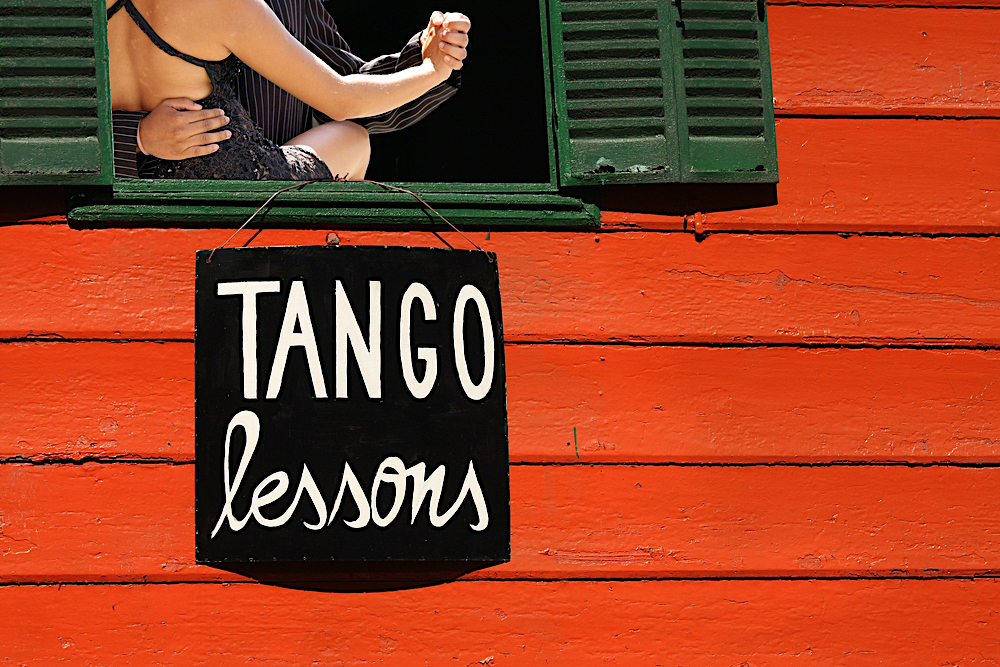 Tango is a partner dance, and social dance that originated in the 1880s along the Río de la Plata, the natural border between Argentina and Uruguay. It was born in the impoverished port areas of these countries, with enslaved Africans populations. The tango is the result of a combination of African Candombe Spanish-Cuban Habanera, and Argentinian Milonga. The tango was frequently practiced in the brothels and bars of ports, where business owners employed bands to entertain their patrons with music. 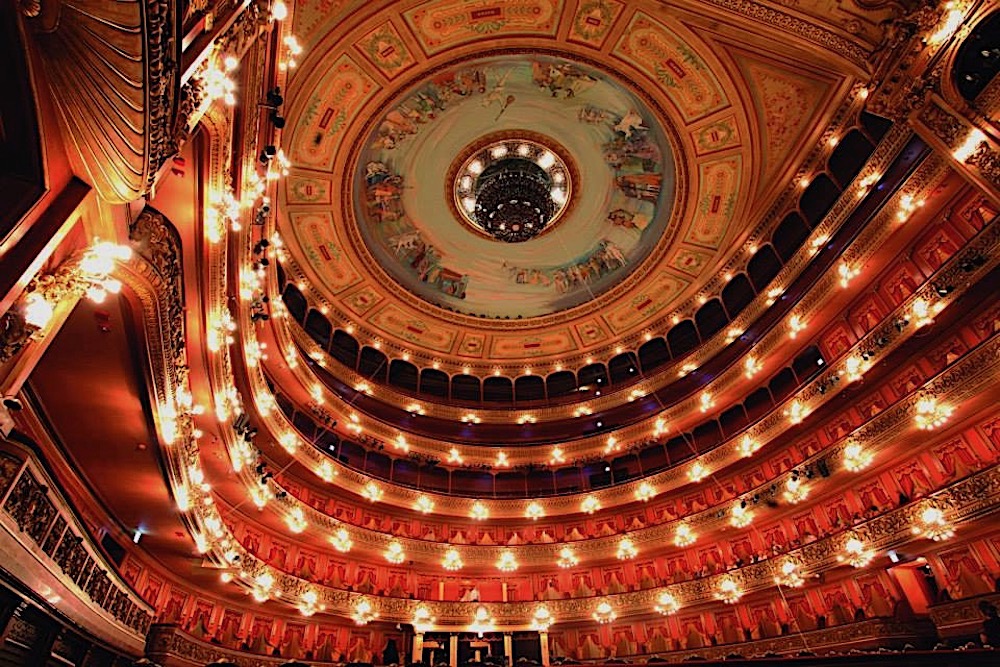 The Teatro Colón is the main opera house in Buenos Aires, Argentina. It is considered one of the ten best opera houses in the world by National Geographic, and is acoustically considered to be amongst the five best concert venues in the world. The present Colón replaced an original theatre which opened in 1857.

WHEN TO GO: The best time to visit Buenos Aires is from April-June (fall) or from September-December (spring). These sweet shoulder seasons usher in mild temperatures, thin crowds, and colorful foliage. Fall and spring also boast reasonable hotel prices.

VISAS: The citizens of 87 countries are allowed to enter Argentina without a visa, or “visa-free”. Visa-free countries include the United States, South Korea, Australia, Brazil, and Turkey. North America, most of Europe, parts of Asia, South Africa, and Australia are generally where visa-free countries are. If you are in Africa or Central Asia, you will most likely need a visa. 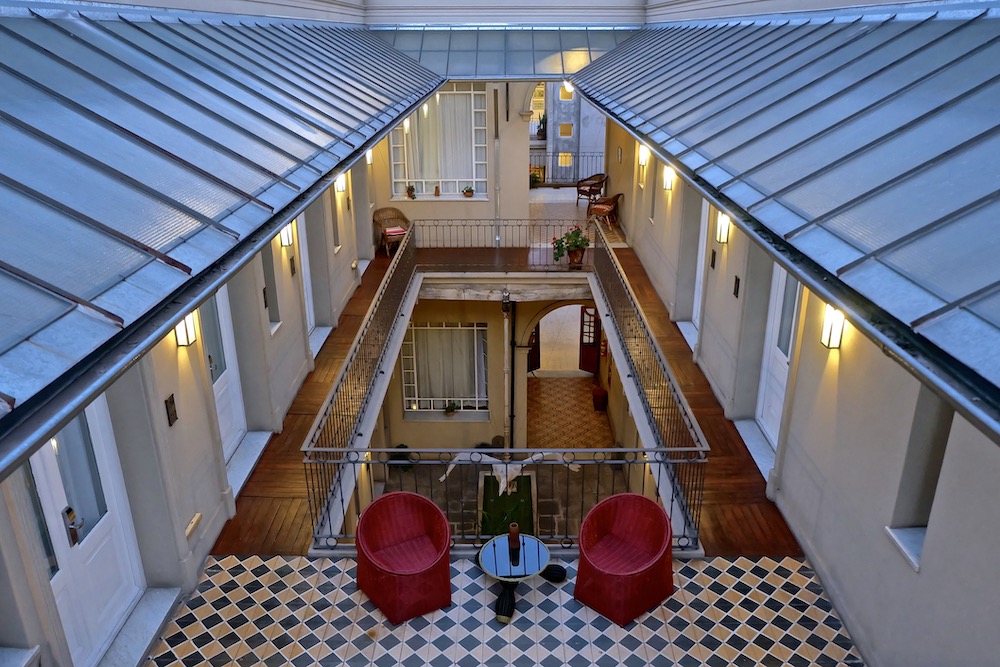 Patios de San Telmo brings to life a world apart. It is one of the terraced patios, a specially rich architecture, and sustainably-restored artisanal floors, it is an avant-garde place full of color and texture. Staying with them evokes a journey through the history of the city. 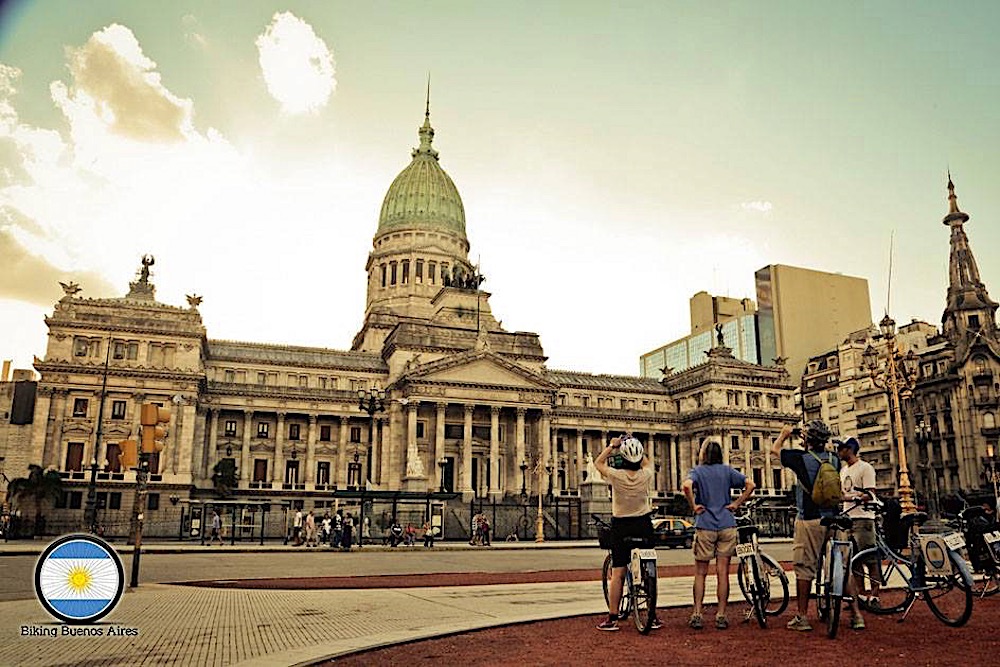 Much more than a bike tour! If you only have a few days to feel local, or if Buenos Aires seems a chaos of opportunities to you, choose Biking Buenos Aires. 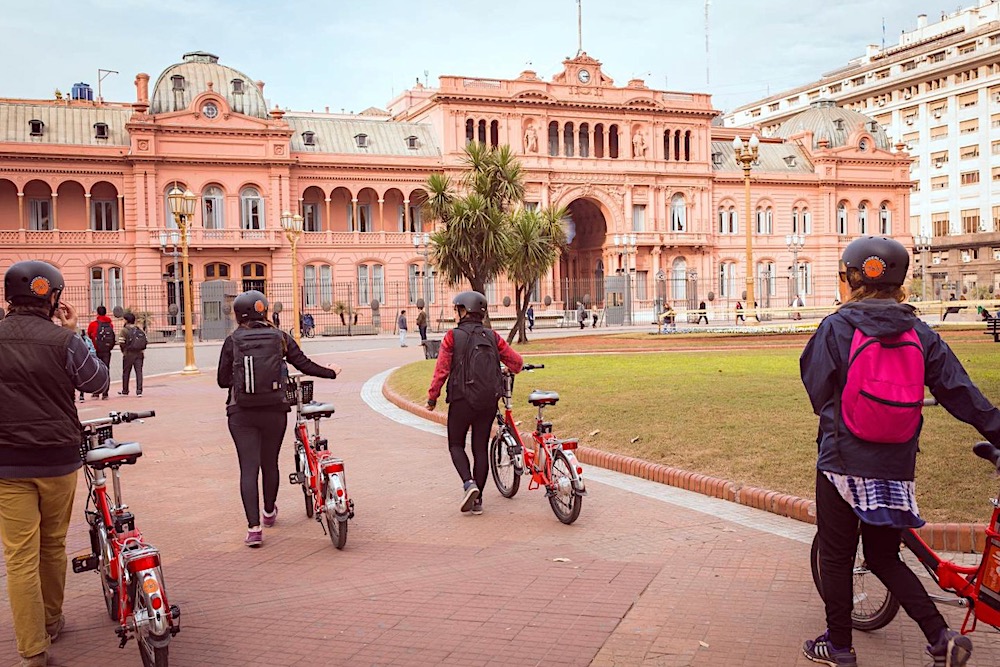 Get to know the whole city with no effort on electric bikes with knowledgeable local guides. Modern communication tools allow them to share more in real time about the places you visit as you pedal! A variety of tours and experiences fit for everyone. 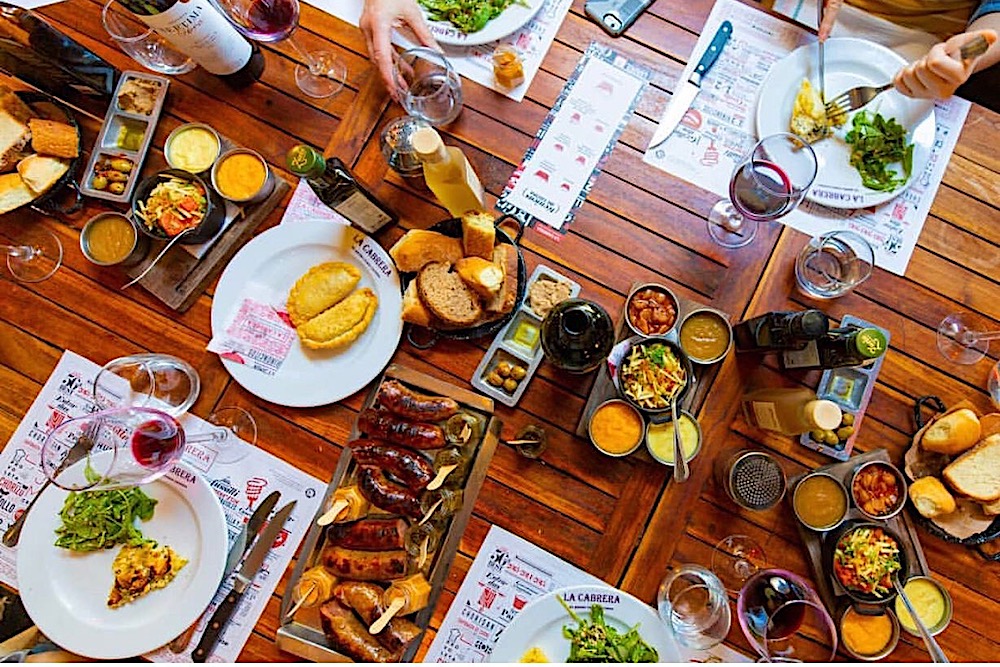 Chimichurri Food Tours visit the best gastronomic establishments of Buenos Aires explaining the history of the dishes, their ingredients, their characteristics and history. At each stop there will be a tasting prepared by each owner of the premises. 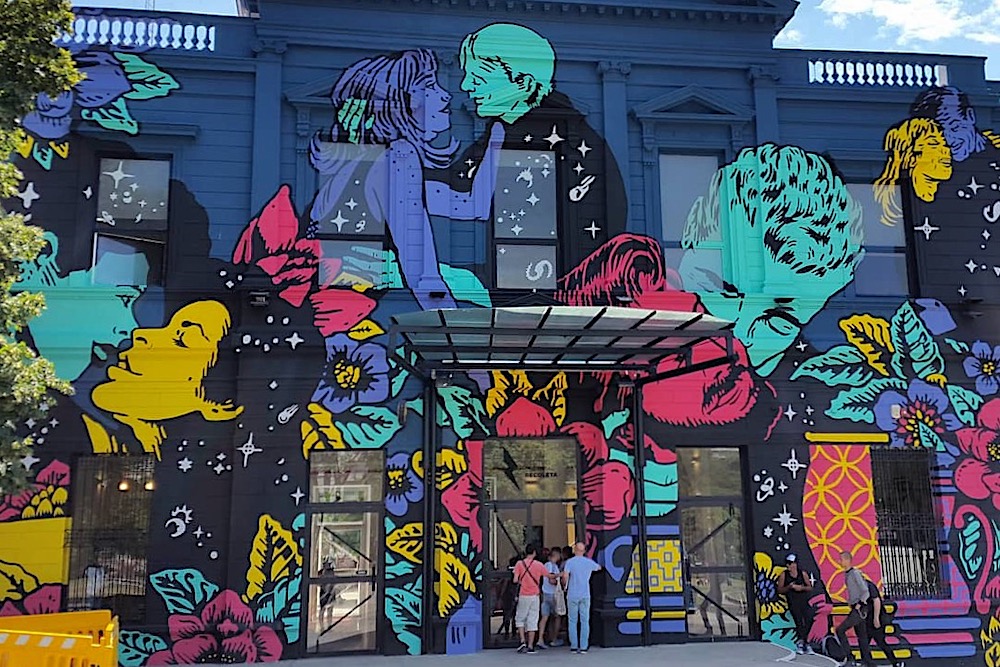 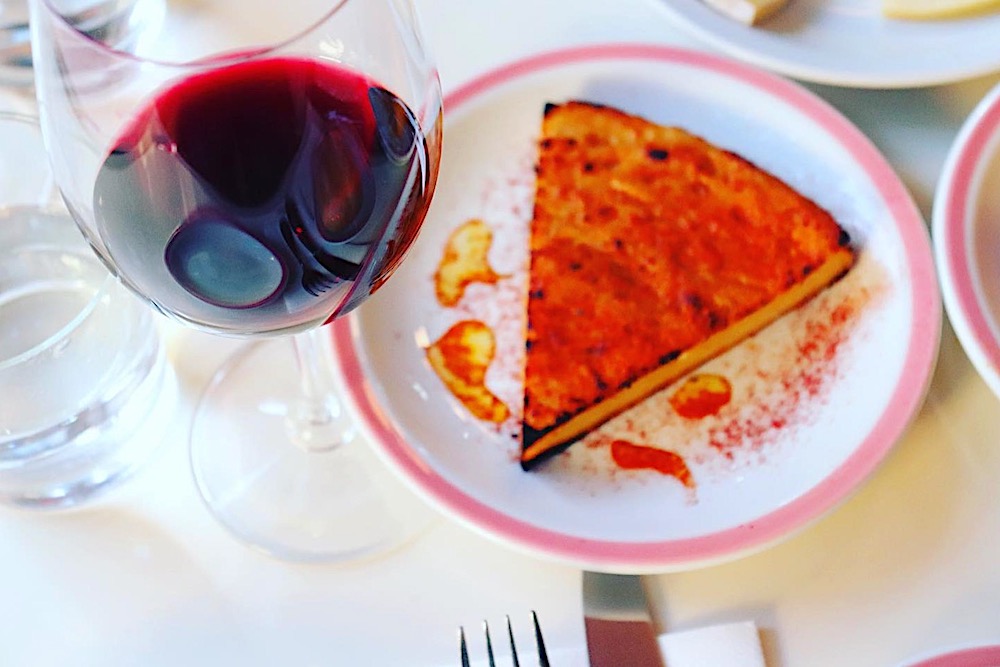 Sherpa Food Tours purpose is to showcase Argentina’s flavours and history in unique, fun and collective experiences. They understand that the best way to experience any culture is through amazing food, stunning locations and lovely company. They create meaningful and sustainable experience that support the local community.

Next week we continue our adventure and explore Montevideo & Punta del Este in Uruguay!