Add the seaside villages of Muizenberg & St James to your travelwishlist 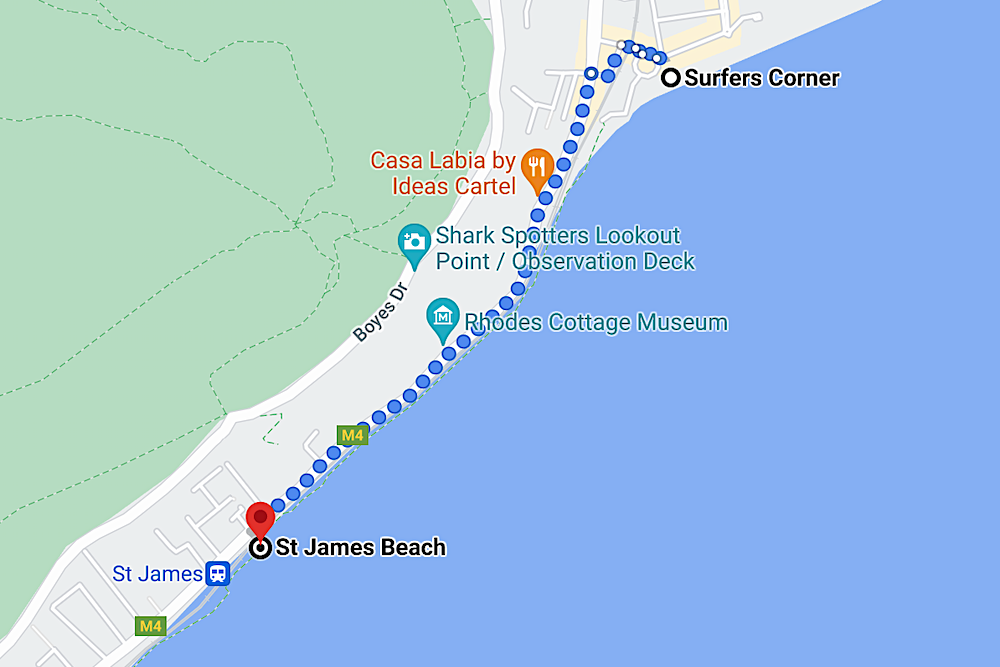 The village of Muizenberg was established by the Dutch in 1743 as a military post, and is located in False Bay, on the road between Cape Town and Simon's Town. It was named after Wynand Willem Muijs, sergeant in charge of the post in 1844, and later commander of the Cape garrison. The railway line from Wynberg reached Muizenberg on 15 December 1882. 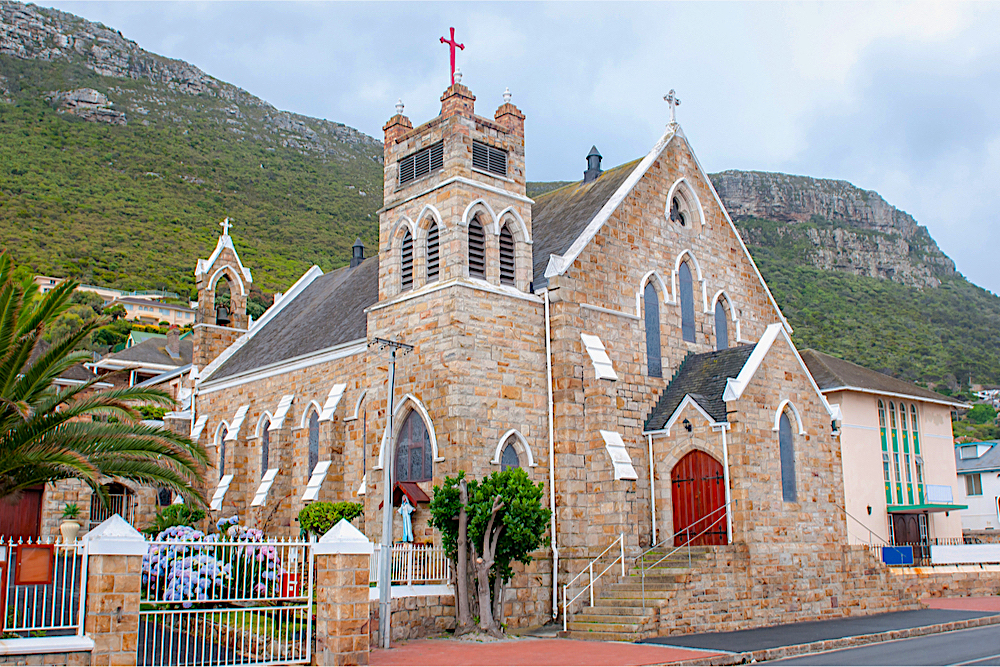 St James is a seaside village situated on the False Bay coast between Muizenberg and Kalk Bay. The suburb is situated between the rocky shore and a steep mountain, and measures only 200m by 2 km. Its name derives from the early St James Catholic Church, built circa 1880 (photo above). Most of the suburb was built between 1910 and 1950, after the railway line was built connecting Cape Town to False Bay.

14 FABULOUS EXPERIENCES (CLICK ON THE LINKS FOR MORE DETAILS): 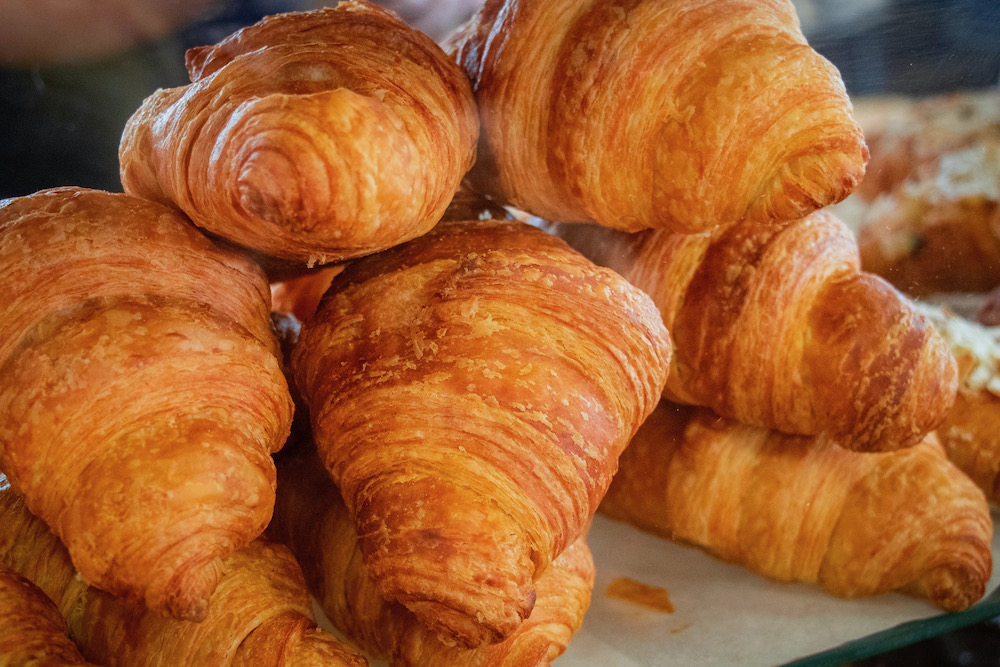 Enjoy a hearty breakfast at one of many restaurants at Surfer’s Corner in Muizenberg or at the FOLK CAFE in St James, alternatively just enjoy a fresh croissant & delicious coffee on the beach to start your day!

Muizenberg Peak Loop is a 7.4 kilometer lightly trafficked loop trail located near Muizenberg, Western Cape, South Africa that features beautiful wild flowers and is rated as moderate. The trail is primarily used for hiking, walking, and running. Dogs are also able to use this trail. 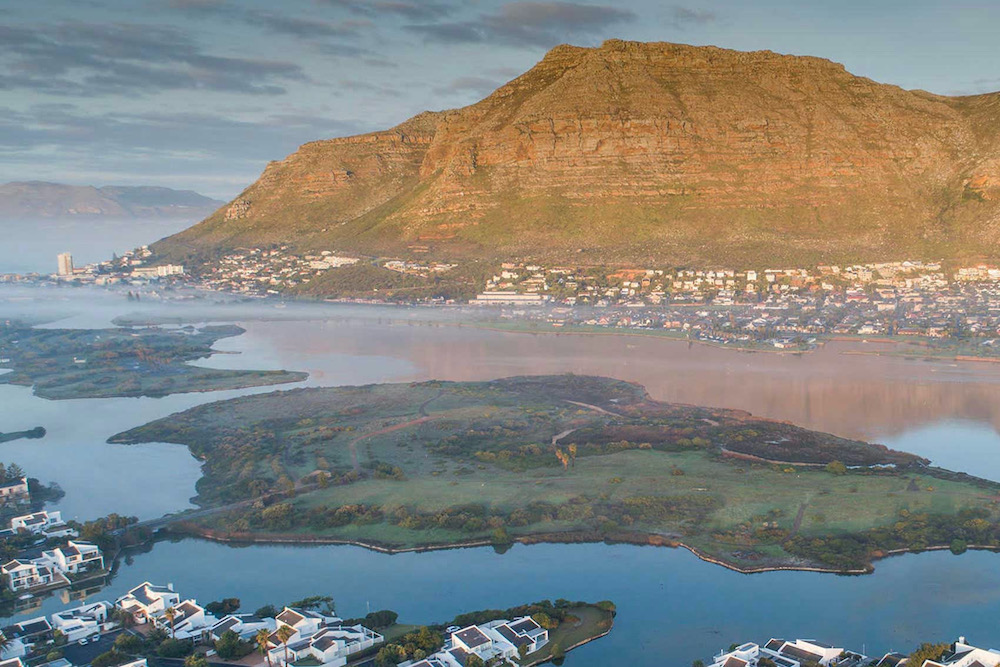 Zandvlei Estuary Nature Reserve (also spelt "Sandvlei") is a 300-hectare (740-acre) nature reserve and recreational area. Entering the ocean in the suburb of Muizenberg, Zandvlei is the only functioning estuary on Cape Town’s False Bay coast, open to the Atlantic Ocean throughout winter and in summer the mouth is manually closed by a sand bar to contain the water, and is opened monthly for a few days at full moon to maintain salinity levels and then closed again. It is also one of the most important estuaries for recruitment of fish such as garrick, steenbras and two species of stumpnose. The surrounding wetland is an important habitat for birds and has 166 species on its official list. There are a number of bird hides available to the public. The Nature Reserve is not as pristine as Rondevlei & Silvermine however. 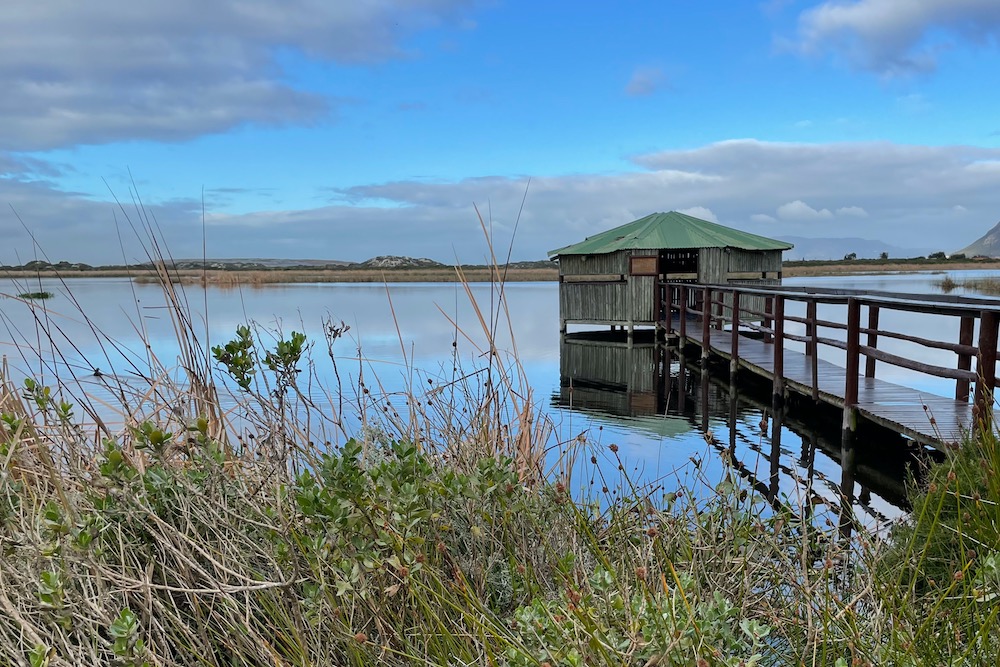 The False Bay Nature Reserve consists of six parts: Rondevlei Section, Zeekoevlei Section, Strandfontein Birding Section, Pelican Park Section, Slangetjiebos Section, and Zandwolf Coastal Section. The reserve is also part of the greater False Bay Ecology Park. Concerned bird lovers established Rondevlei as a bird sanctuary in 1952. Today, it is a well-run nature reserve of 290 hectares in extent with a museum, an auditorium, a network of footpaths, viewing towers, and several bird hides named after well-known birders. There is a permanent wetland with Cape Flats sand fynbos to the north, and seasonal wetlands and Cape Flats dune strandveld in the south. 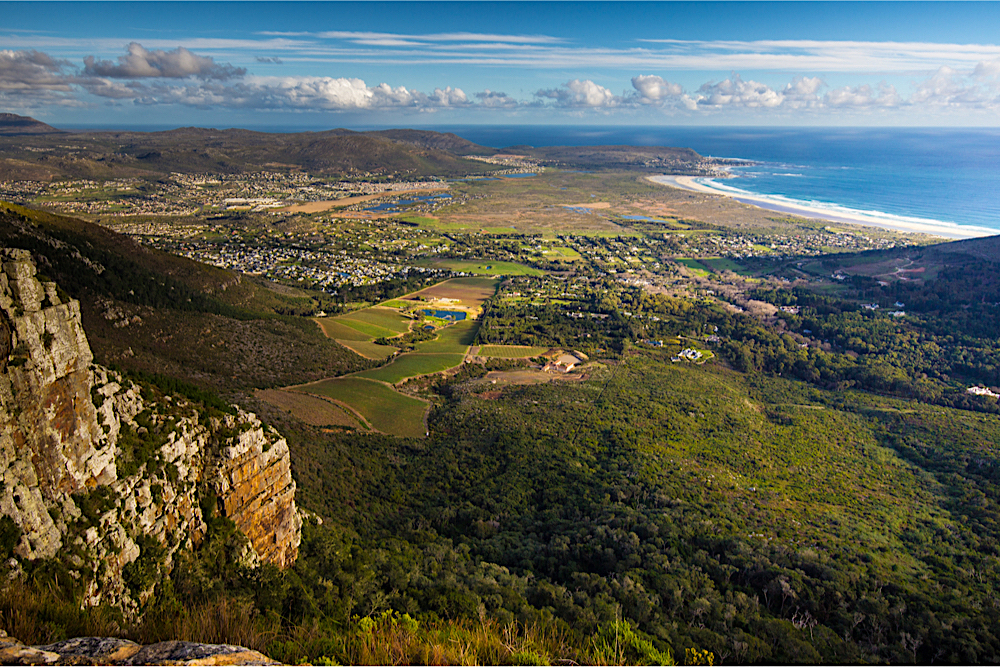 Silvermine Nature Reserve forms part of the Table Mountain National Park in Cape Town, South Africa. It covers the section of the Cape Peninsula mountain range from the Kalk Bay mountains through to Constantiaberg. The area is a significant conservation area for the indigenous fynbos vegetation, which is of the montane cone-bush type at this location. The Ou Kaapse Weg main road runs through the reserve, cutting it into a northern and southern section. The Silvermine reservoir, on the north side, was built in 1898 to supply water to Cape Town. The area is popular for walking, hiking, picnicking, and mountain biking. There are a number of sandstone cave systems in the reserve and there are rock climbing routes on Muizenberg Peak. 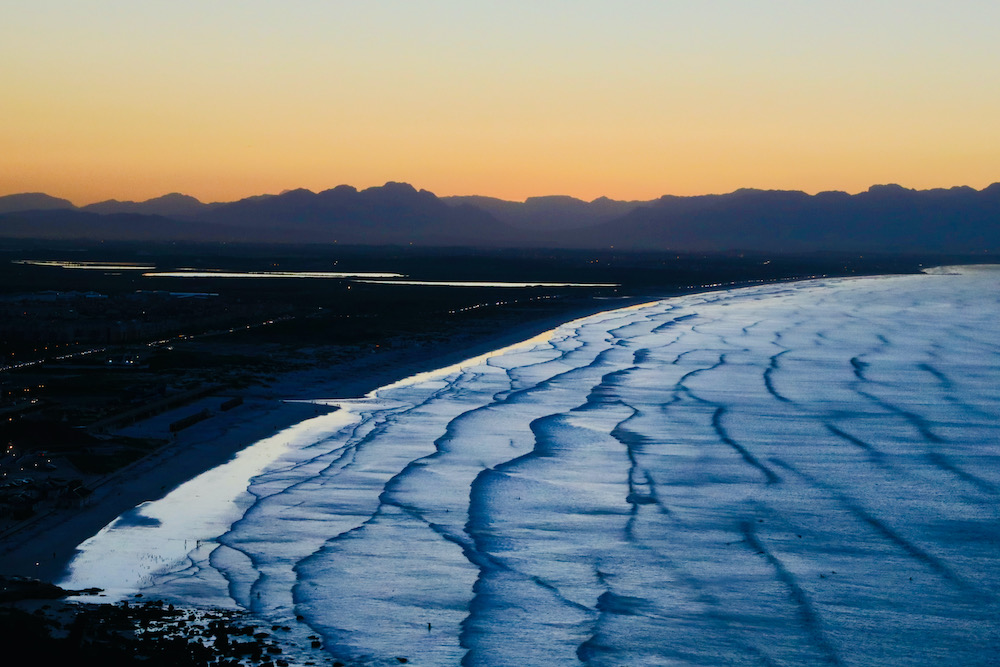 Transport wagons from Cape Town delivered goods to the Southern Suburbs. Access became much easier after the Railway reached Muizenberg.  Boyes Drive was built in 1929. This 7 km long Mountain Road offers an alternative Route, to the more congested Main Road along the Seafront and provides some excellent Viewing Sites as well as access to some wonderful hikes up to the Silvermine Nature Reserve. 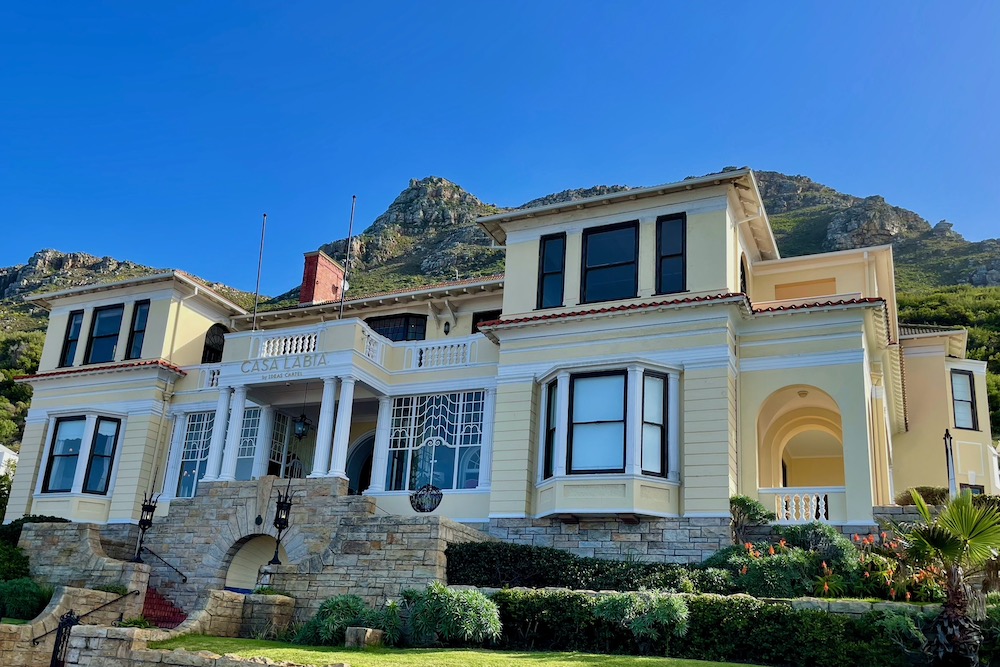 Built in 1929 to reflect the spirit of 18th century Venice, Casa Labia is the former Muizenberg residence of Count and Countess Natale Labia. Following a complete two-year restoration by the family, this much-loved national monument was opened to the public on 5 May 2010.

Het Posthuys was first recorded on a map in 1687 and served as a lookout post for enemy ships entering False Bay. It was restored to its original appearance in 1982 - 1983, whereafter it became a museum. 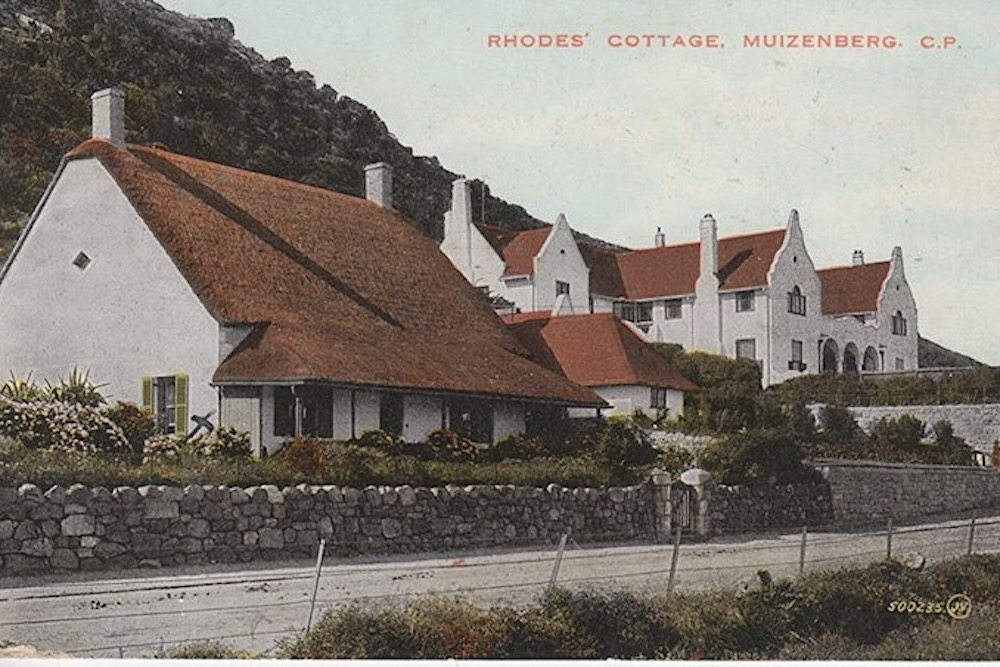 Cecil John Rhodes bought the cottage in 1899 and lived there until his death on 26 March 1902. It was transferred to the Cape Town City Council in 1937, which administered it as a museum. 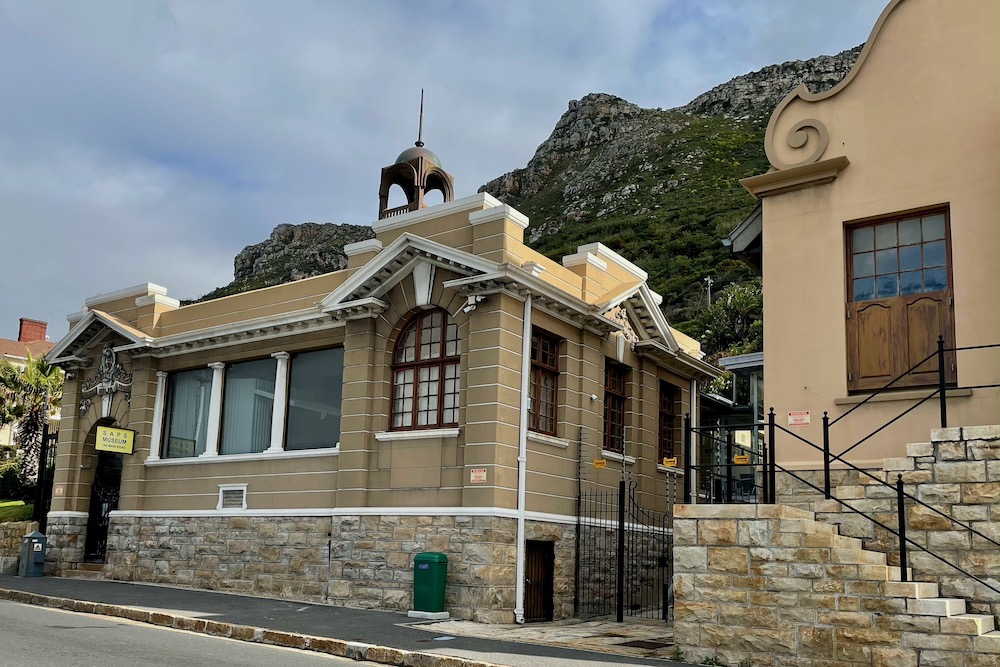 The SAPS Museum is situated in the Old Post Office, built in 1911 and the first post office in South Africa to receive airmail post on 27 December 1911. The Old Post Office became a fully fledged police station in 1934 when the Post Office moved to its present site. 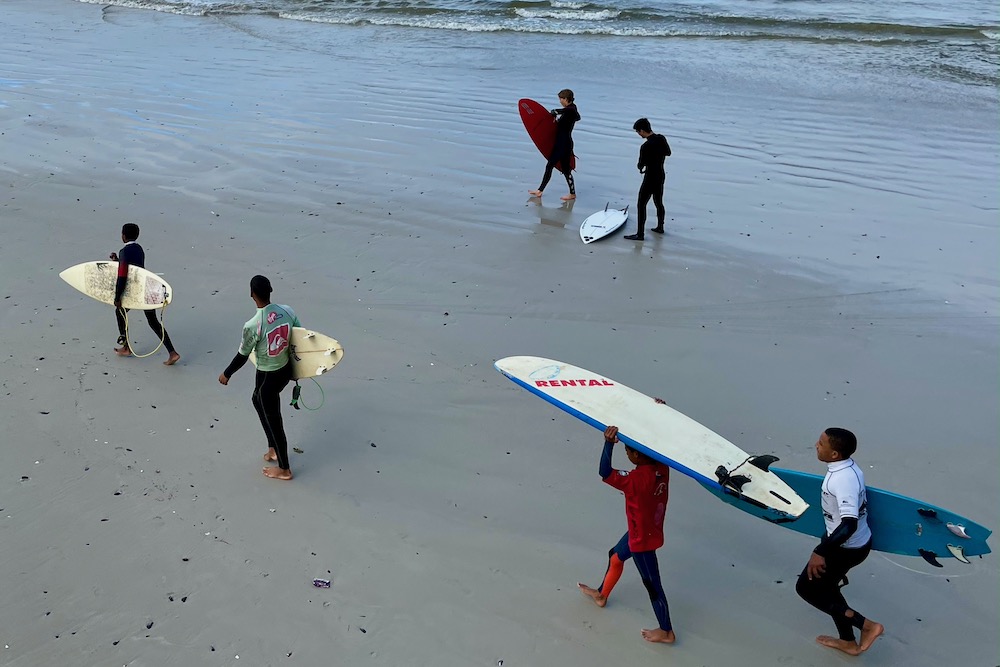 Muizenberg is considered to have one of the best breaks for beginner surfers and there are numerous surf schools that offer surf lessons and board & wetsuit rentals - give it a go!

Enjoy a delicious lunch at one of the many restaurants with beautiful seaviews at Surfer’s Corner or at the FOLK CAFE in St James, alternatively buy some fresh fish/calamari & chips from LUCKY FISH to enjoy on the beach while enjoying the action on the beach & in the surf! 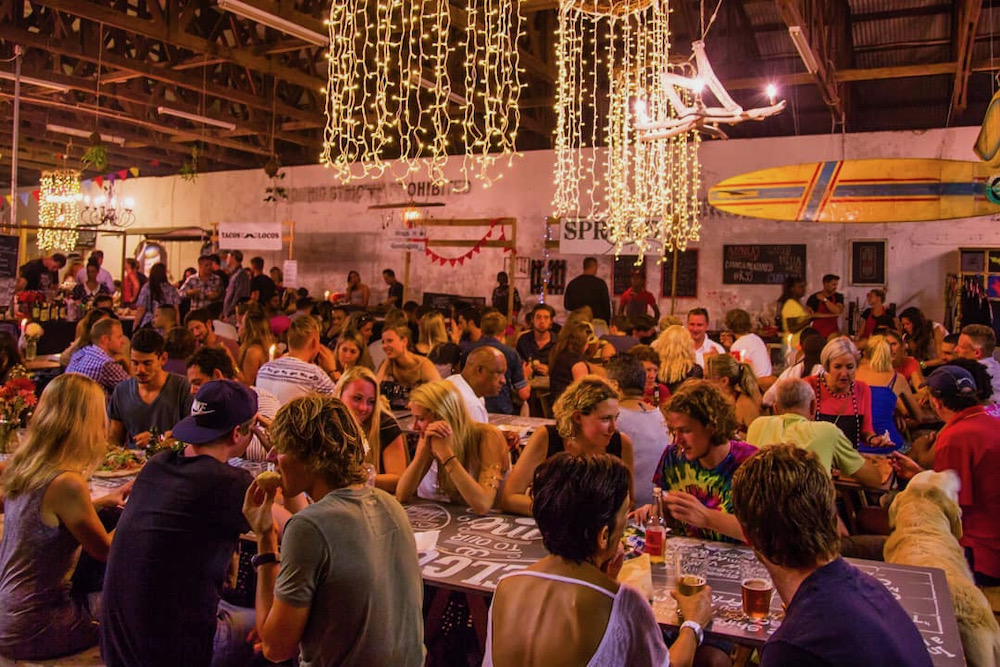 As the cornerstone of the Muizenberg community, the Blue Bird Garage Food & Goods Market takes place every Thursday and Friday night in a beautiful old postal plane hangar on the edge of this urban village. You will find this space filled with a collection of local artisans, specialty cooks, bakers, producers and designers. They bring the butcher, the baker, the t-shirt maker together under one eclectic, creative, vibey roof. Handpicked South African wines, craft beer, delicious food, a creative kids area and great company are all part of the tapestry that makes this a very unique and inviting market experience. 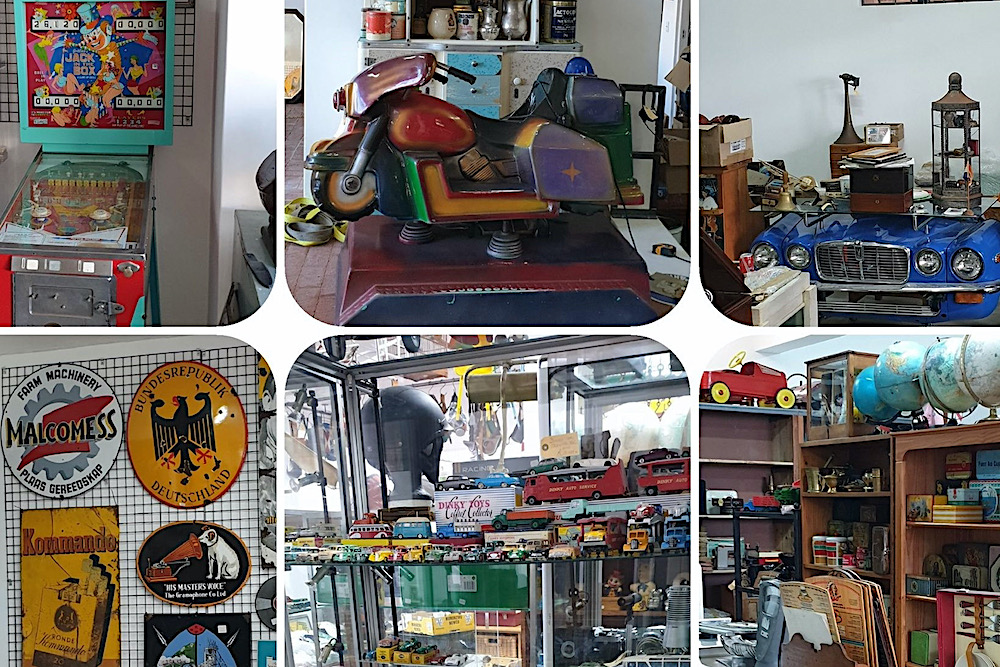 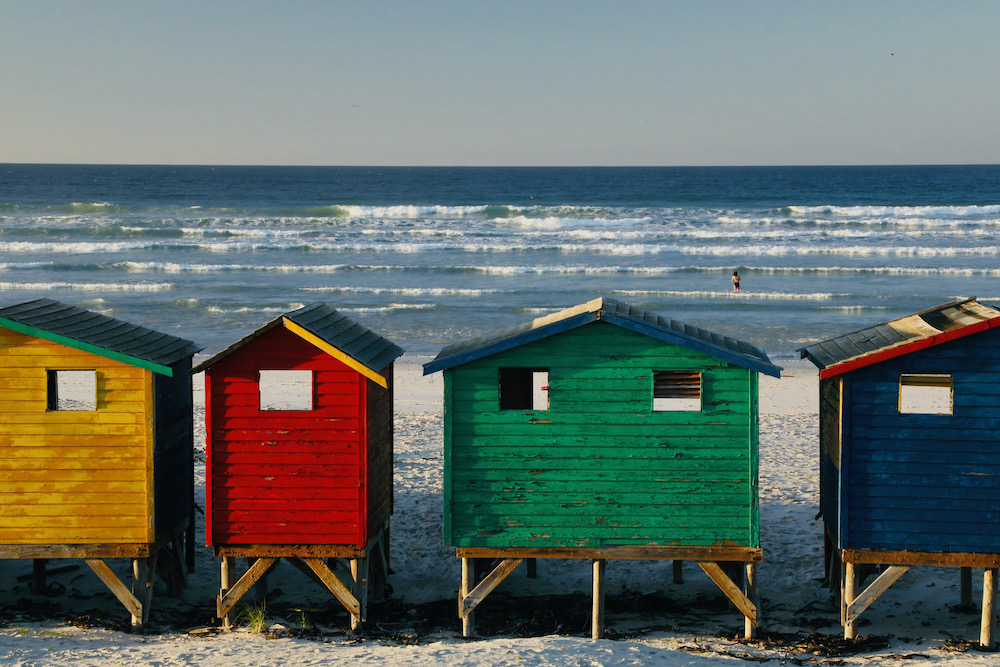 After the railway reached Muizenberg in December 1882, it became South Africa’s premier holiday resort - the “Brighton of South Africa”. In 1913 a magnificent Edwardian styled station with an impressive clock tower was completed and opened on 7 June 2013 by the Minister of Transport, the Hon. Henry Burton. The two rows of iconic colourful beach/bathing huts are a must stop for your selfie/s!

11. SWIM IN THE TIDAL POOL AT ST JAMES 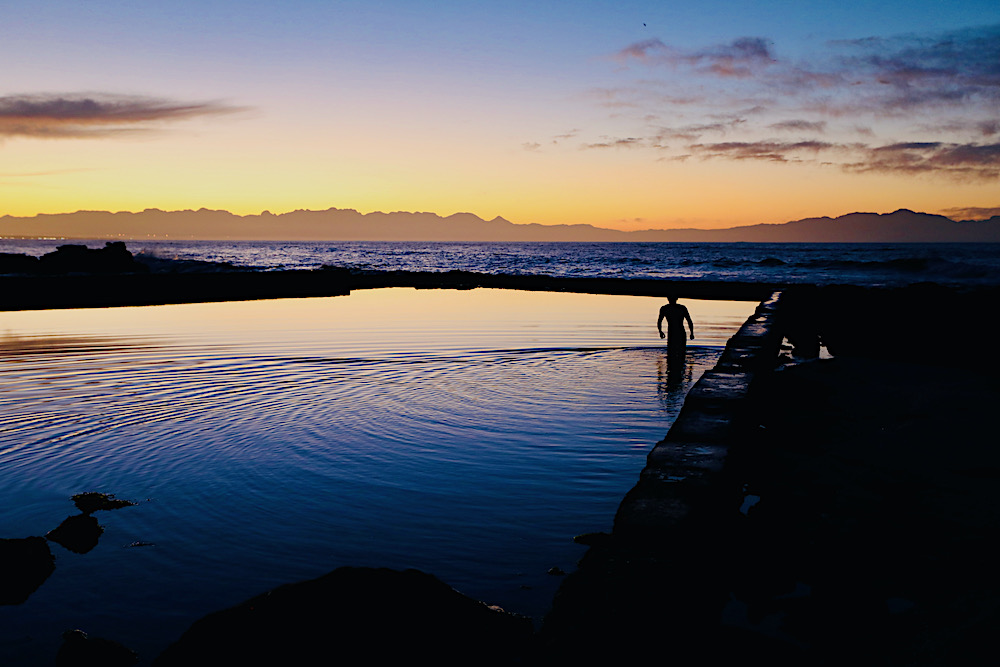 According to oral tradition this tidal pool was originally constructed by the Khoi as a fish trap. Advocate Bill Schreiner, son of W. P. Schreiner, erstwhile Premier of the Cape Colony, lived most of his life at Eastcliffe on 16 Main Road. He was instrumental in persuading the Kalk Bay-Muizenberg Municipality to build a concrete wall thus creating a proper bathing tidal pool at St James in 1911. The bathing boxes originally were built as private dressing booths for families, and there used to be many more in earlier days. If you are brave, join the locals for their morning dip at sunrise!

12.  WALK ON THE BEACH WITH YOUR BEST FRIEND/S 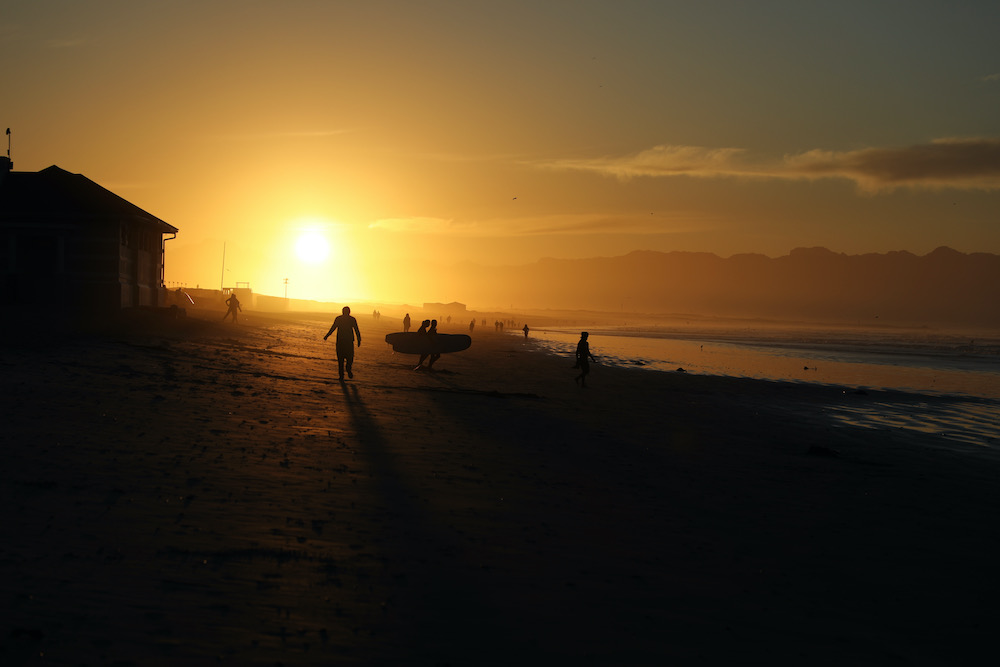 Sunrise is a magical time on the beach at Muizenberg - take a walk with your best friend/s for a great start to your day! 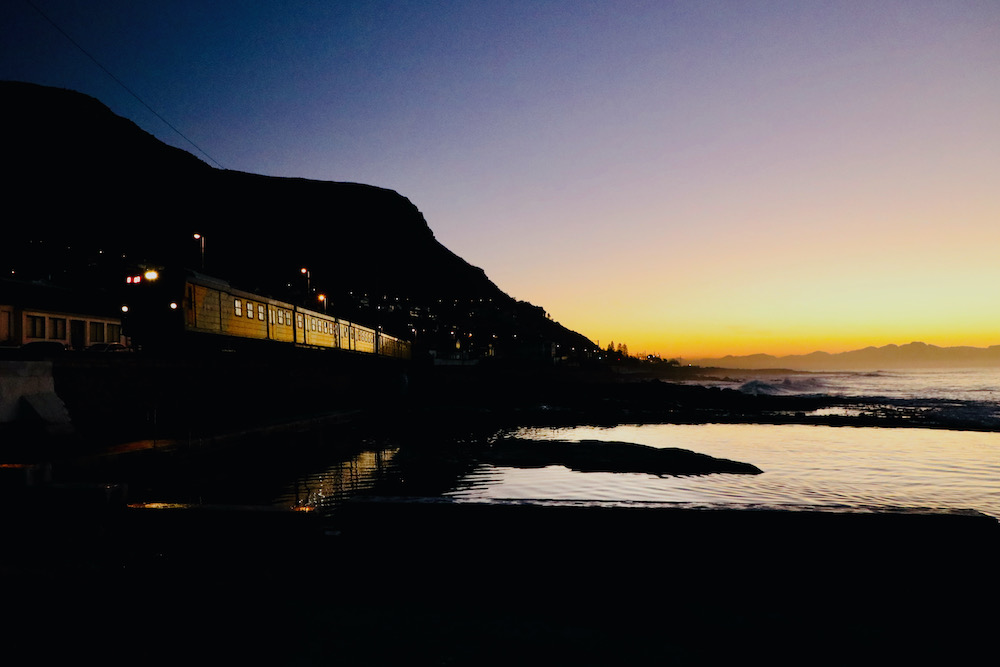 Start the coastal walk to St James at Surfer’s Corner in Muizenberg and follow the walkway for a pleasant stroll between the sea and the railway for 1.6 km to the St James Tidal Pool. There are numerous black oystercatchers and you might even spot a giant kingfisher! After breakfast or lunch in St James, take the historical route back to Muizenberg.

14. WALK THE  HISTORICAL ROUTE ALONG THE MAIN ROAD 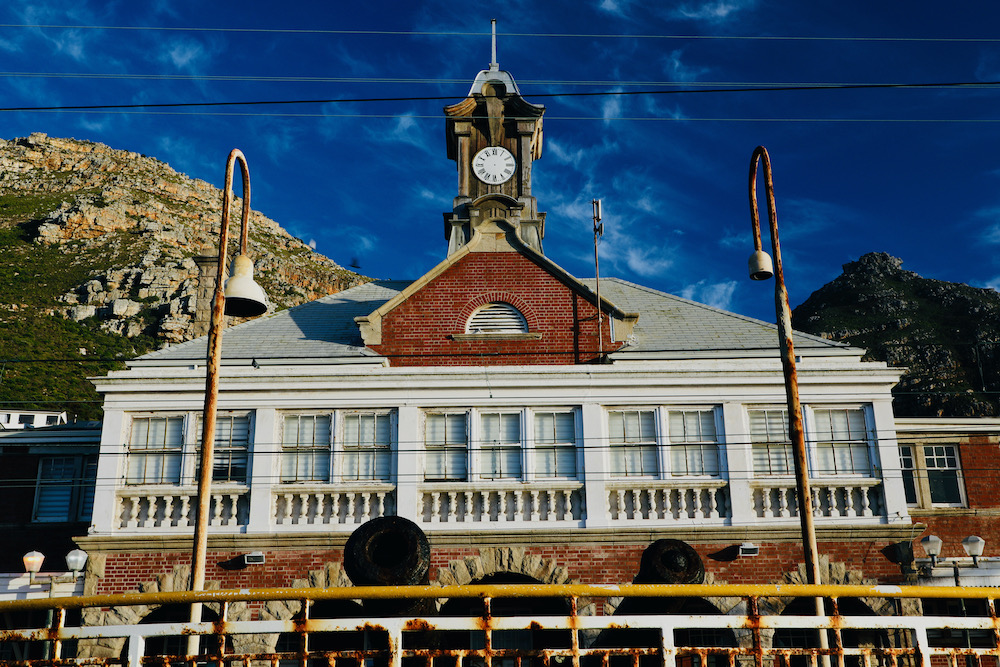 After the Anglo-Boer War ended in 1902 and the Municipality widened, kerbed and guttered the Main Road in 1904 the historic mile between Muizenberg and St James became sought after by wealthy mining magnates and prominent businessmen. It was known as “Millionaire’s Mile” and a variety of architectural styles can be viewed on this walk along the Main Road. After breakfast or lunch in St James, stroll on the St James Coastal Path back to Muizenberg.