Brittany is the farthest west of the regions of Metropolitan France. It is covers about four-fifths of the territory of the historic province of Brittany. Its capital is Rennes. The peninsular region is bordered by the English Channel to the north and the Bay of Biscay to the south, and its neighbouring regions are Normandy to the northeast and Pays de la Loire to the southeast. 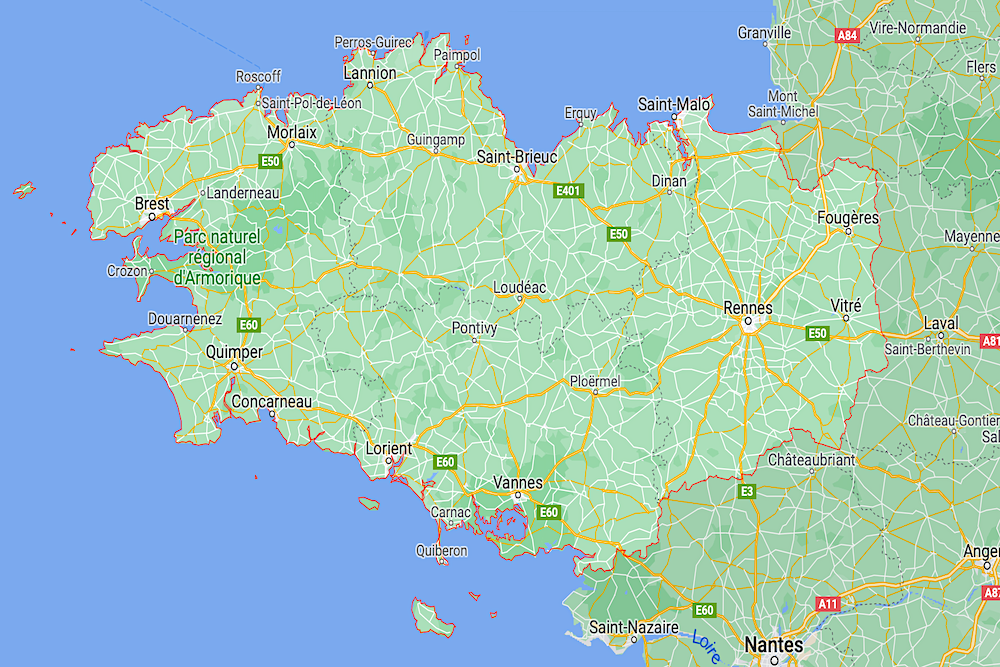 EXPLORE THESE 20 GORGEOUS DESTINATIONS IN BRITTANY: 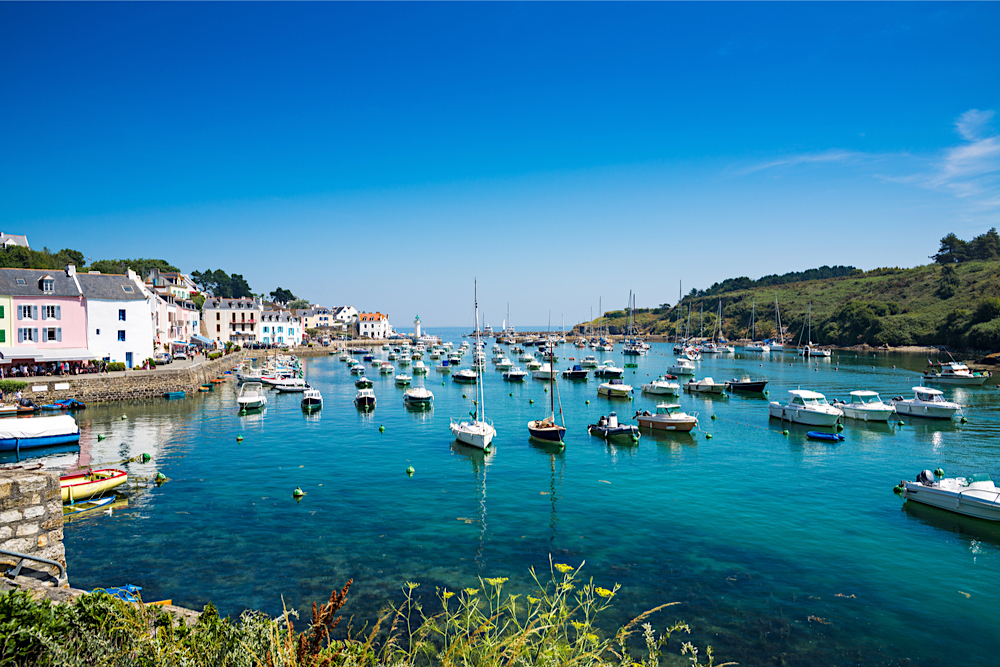 Belle-Île is the largest island off the coast of Brittany in northwest France. In the main town La Palais is the star-shaped fortress, Citadelle Vauban.  The fort at Pointe des Poulains, the island's northern tip, houses a museum dedicated to 19th-century actress Sarah Bernhardt. Sandy Donnant Beach lies on the rugged west coast. Nearby, the Grand Phare lighthouse looks out over the needles rock formations of Port-Coton. 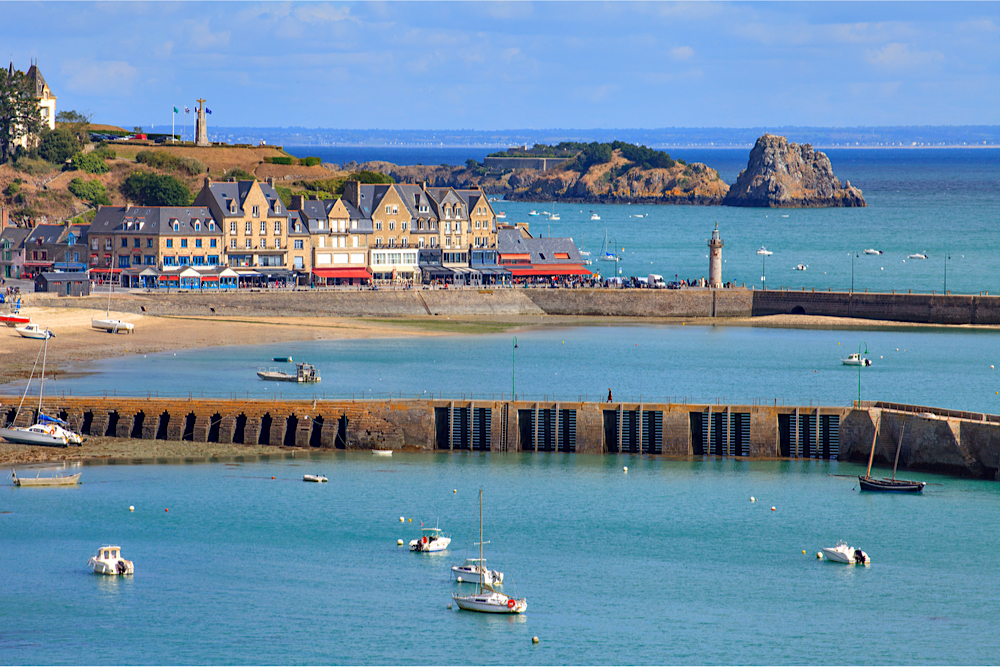 The oyster capital of Brittany, Cancale, is located on the northern coast of Brittany to the east of Saint-Malo at the start of the Emerald Coast. The town is divided into two areas,  the main town on a headland and the port called La Houle, with a steep cobbled street between the two parts.The town is famous for the oyster beds along the coast and round the harbour at Cancale. Cancale oysters have been famous for at least 2000 years since the days when they were eaten by the soldiers of Julius Caesar and later when they were delivered daily to Louis XIV. 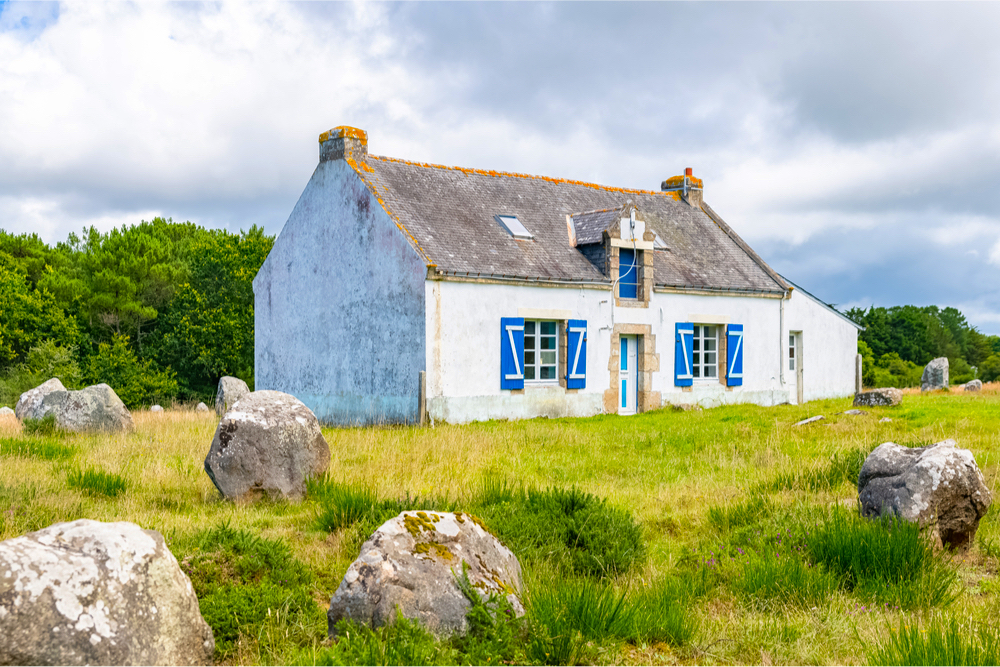 Carnac is renowned for the Carnac stones, thousands of prehistoric standing stones spread across three alignments: Ménec, Kermario and Kerlescan. Nearby, the Saint-Michel tumulus is a millennia-old burial mound crowned by a small chapel. In town, the Museum of Prehistory has artifacts from the area’s Neolithic period. To the south of the town is the long sandy beach of Grande Plage. 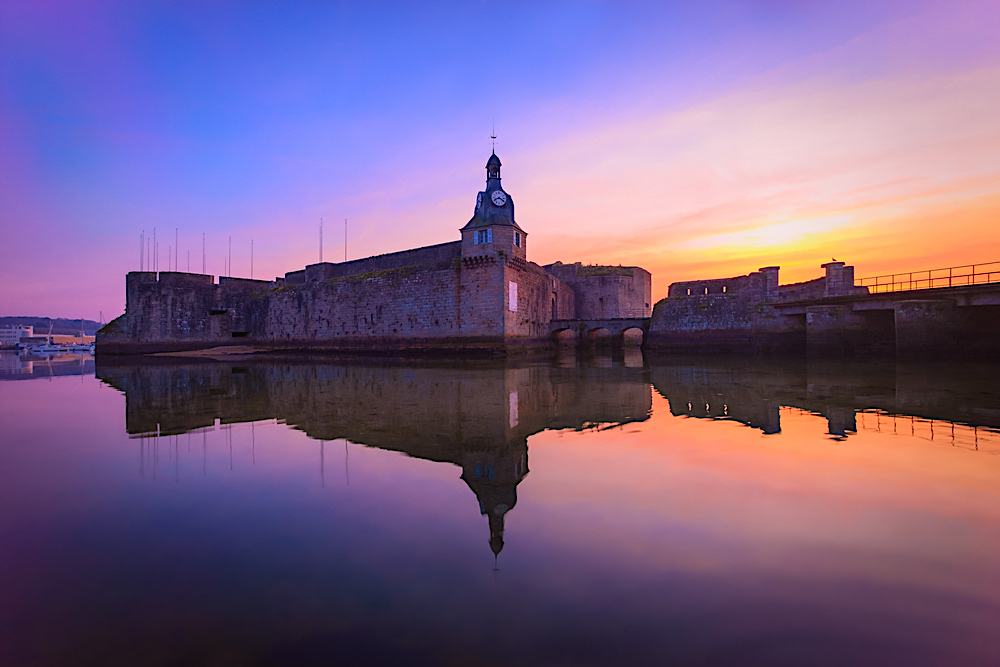 Concarneau is a commune in the Finistère department of Brittany and France's third most important fishing port. Concarneau is bordered to the west by the Baie de La Forêt. The town has two distinct areas: the modern town on the mainland and the medieval Ville Close, a walled town on a long island in the centre of the harbour. 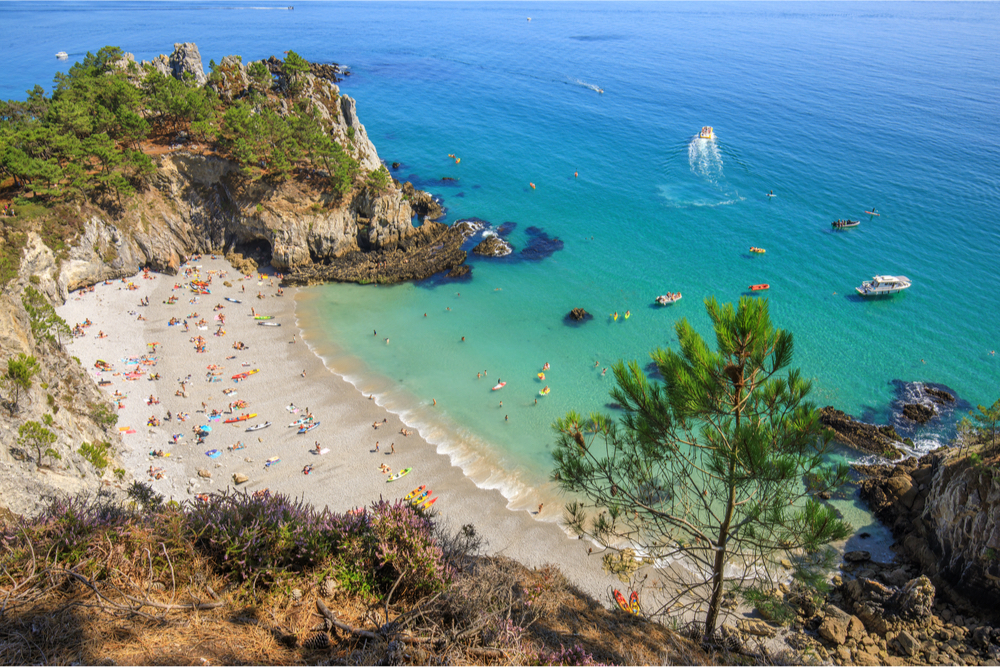 Crozon sits on the Crozon Peninsula, where medieval and 17th-century fortified towers line the Route des Fortifications. The coast near Morgat Beach is known for its multicolored sea caves, including Grotte de l’Autel.  To the south, tiny L'île Vierge Beach is surrounded by rugged cliffs. 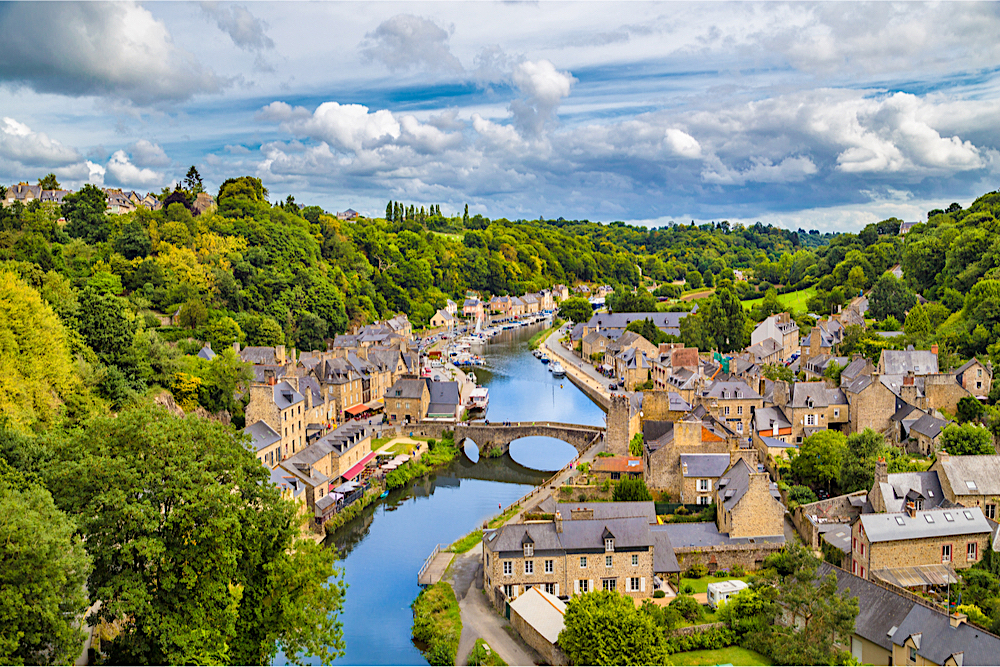 The gorgeous town of Dinan is famous for its medieval ramparts, cobblestone streets and half-timbered houses. Dinan Castle has a 14th-century keep and the Tour du Coëtquen, a 15th-century artillery tower. The grand, Gothic-style Saint-Malo Church has vibrant stained-glass windows and the Clock Tower offers panoramic views. Visit the Rail Museum for its model railways, posters and signal boxes. 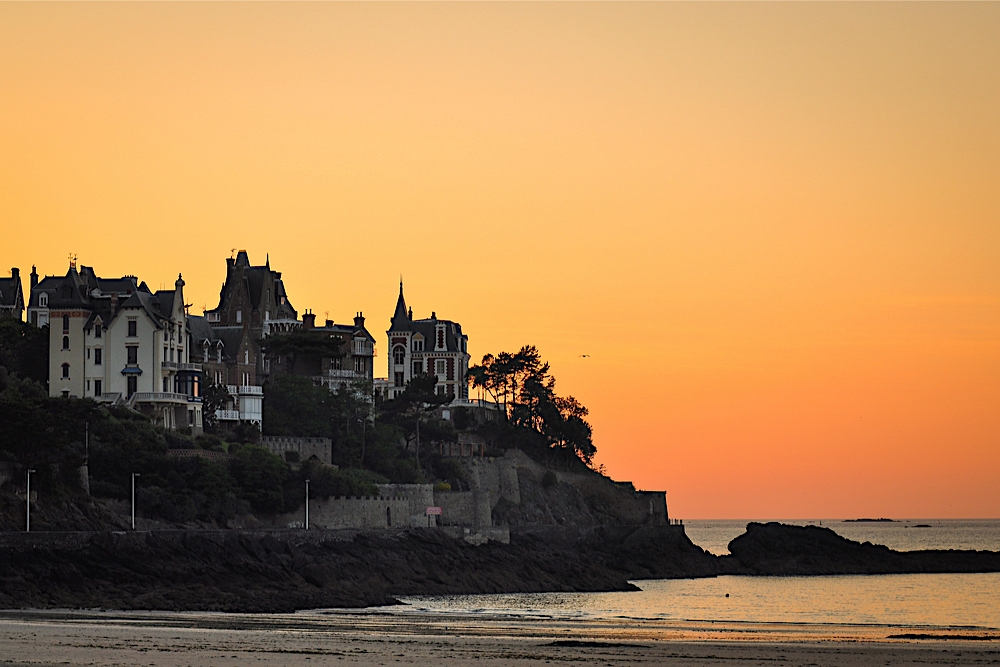 The fashionable seaside resort of Dinard is perched on a rocky promontory at the mouth of the Rance River opposite Saint-Malo. The locality was a fishing village until the middle of the 19th century, when it began to be frequented by British holidaymakers. Now it is an upmarket resort, renowned for its magnificent scenery and sandy beaches. It has numerous hotels, villas, a casino, a Breton museum, a golf course, and an aquarium, as well as a wide range of commercial services. 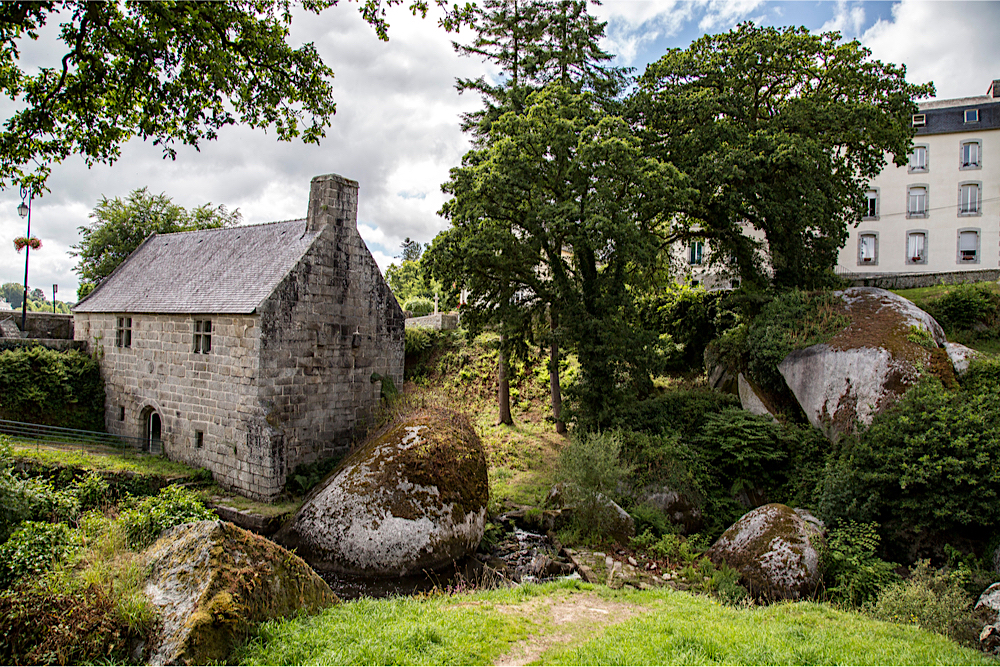 Huelgoat is a secluded village, nestled in the Monts d'Arrée, that is home to the magical Forêt d'Huelgoat where unusual rock formations and fascinating myths and legends abound. Meaning 'high wood' in Breton, Huelgoat was once the home of a Celtic Iron Age settlement and archaeologists have uncovered the ancient Celts' defences in the woods. Part of the Armorique Natural Regional Park, the Forêt d'Huelgoat is looked after by the French National Forest Authority. 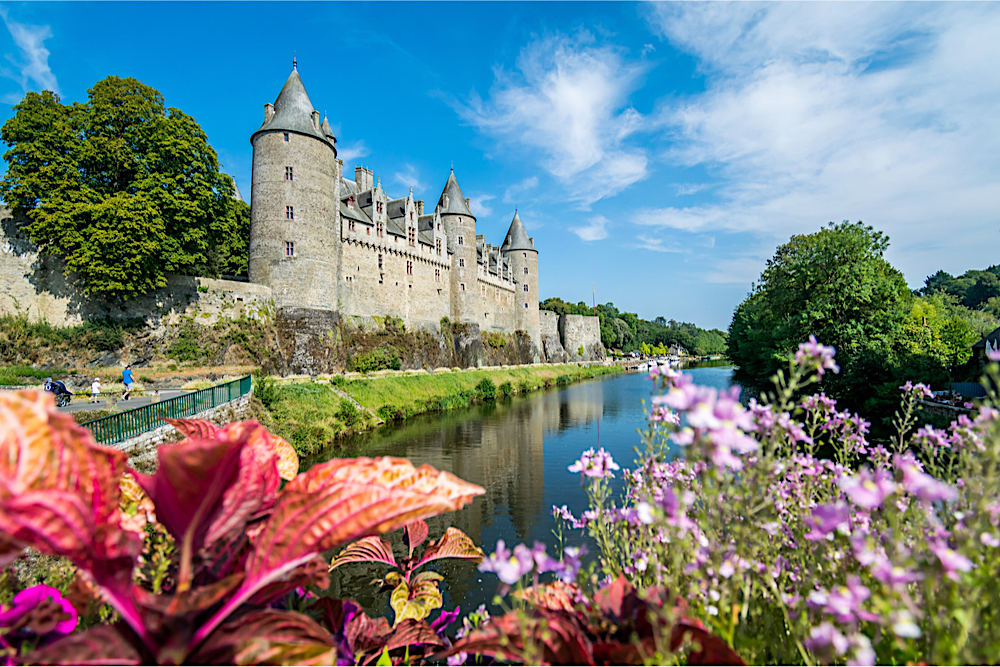 Josselin has its fair share of medieval half-timbered houses; the best examples are south of the Nantes-Brest canal in the Sainte-Croix district. The main hub of activity is the town square next to the Gothic Basilica Notre Dame du Roncier – climb up to the top of the bell tower for panoramic views over the area. A lively market fills the surrounding streets on Saturday mornings. Josselin’s castle has been in the Rohan family on and off for centuries. In fact, the town is named after the son of the viscount who built it. The castle, now owned by the only remaining branch of the Rohans, is open to the public from April to October. Visitors can admire the 19th-century dining room, the drawing room with its impressive 16th-century fireplace and the library housing more than 3,000 volumes dating from the 17th century. Around the castle are French-style gardens with vast lawns and low hedges as well as a rose garden with 40 different species. The gardens host a Medieval Festival each year on 14th July. 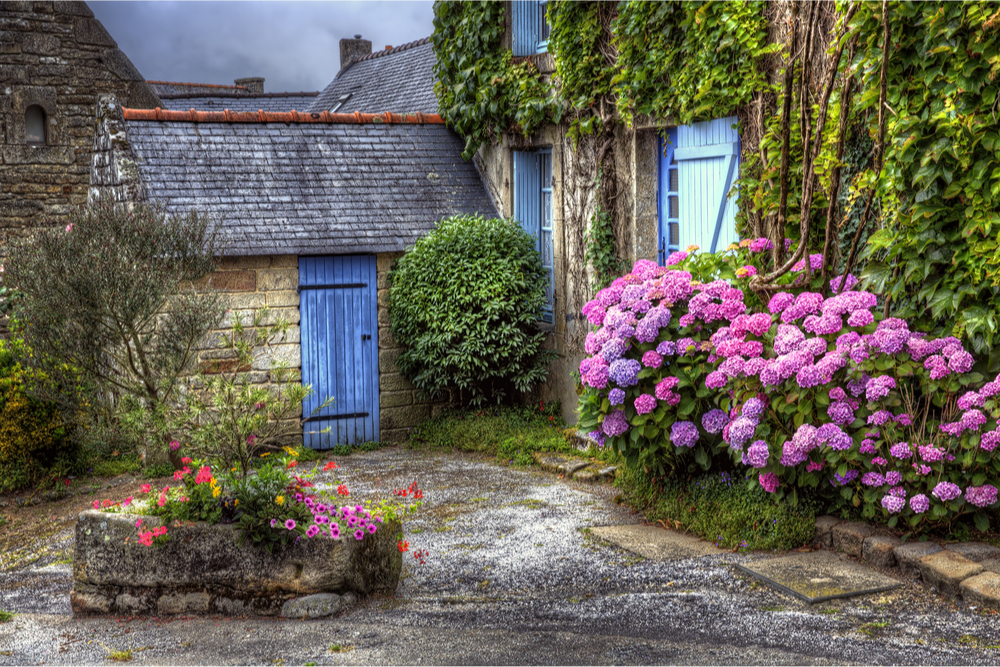 Locronan has a population of a mere 800 and  is a member of the Les Plus Beaux Villages de France ("The most beautiful villages of France") association. The village's name means the "hermitage of Ronan", from the Breton lok which means hermitage, and after the eponymous founder Saint Ronan. It has previously been known as Saint-René-du-Bois. Saint Ronan is greatly venerated in Brittany. He was an Irish Christian missionary of the 6th century who came to the region to teach the people. 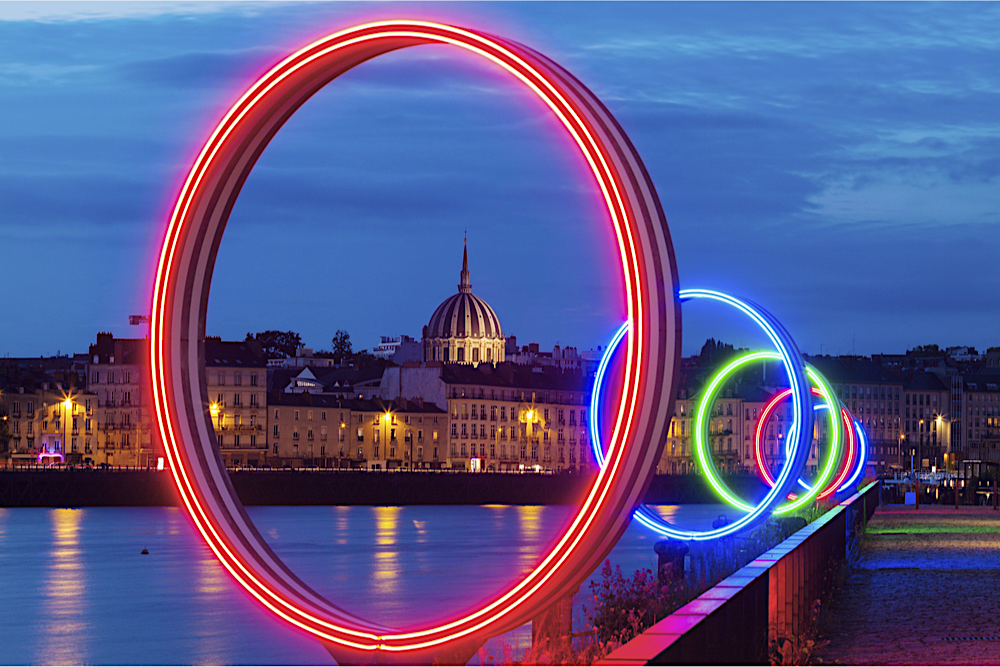 Nantes is a city in Loire-Atlantique on the Loire, 50 km (31 mi) from the Atlantic coast. The city is the sixth largest in France. It is the administrative seat of the Loire-Atlantique department and the Pays de la Loire region, one of 18 regions of France. Nantes belongs historically and culturally to Brittany, a former duchy and province, and its omission from the modern administrative region of Brittany is controversial. 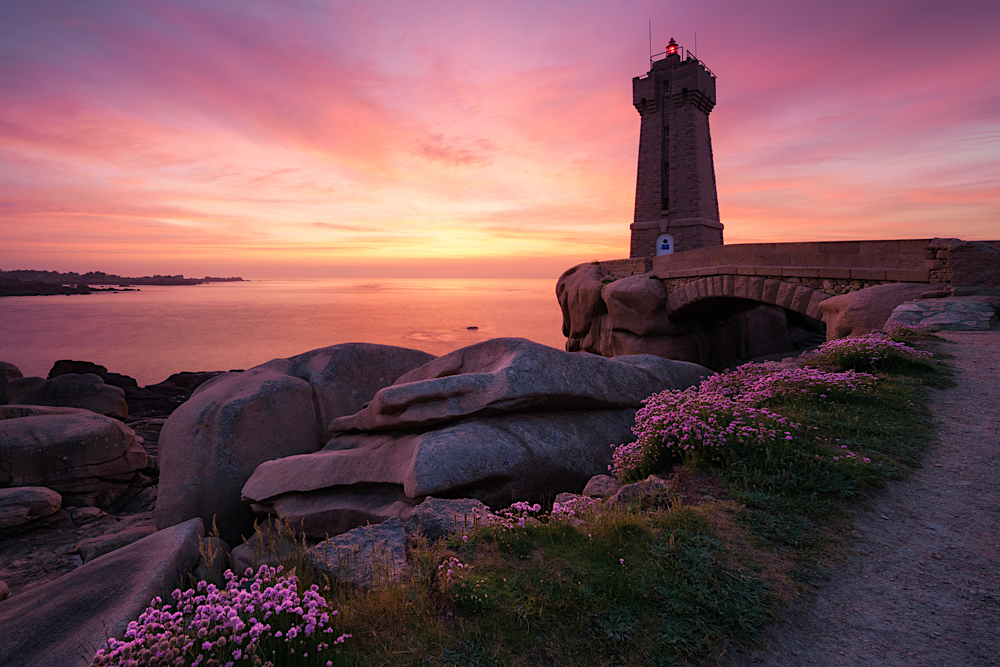 The village port of Ploumanac’h was voted "the village most preferred by the French” in 2015. It lies 3 kilometres north-west of the town Perros-Guirec. An outstanding feature of the area is the pink granite rock and sands of the Côte de Granit Rose coast. Buildings of interest are the tidal mill and the Ploumanac'h Lighthouse. The chapel of Saint Guirec faces the beach, opposite its little 12th-century oratory which is surrounded by the sea at high tide. The small chateau is not open to the public but it was the place where Henryk Sienkiewicz wrote Quo Vadis and gained himself a Nobel Prize in Literature. 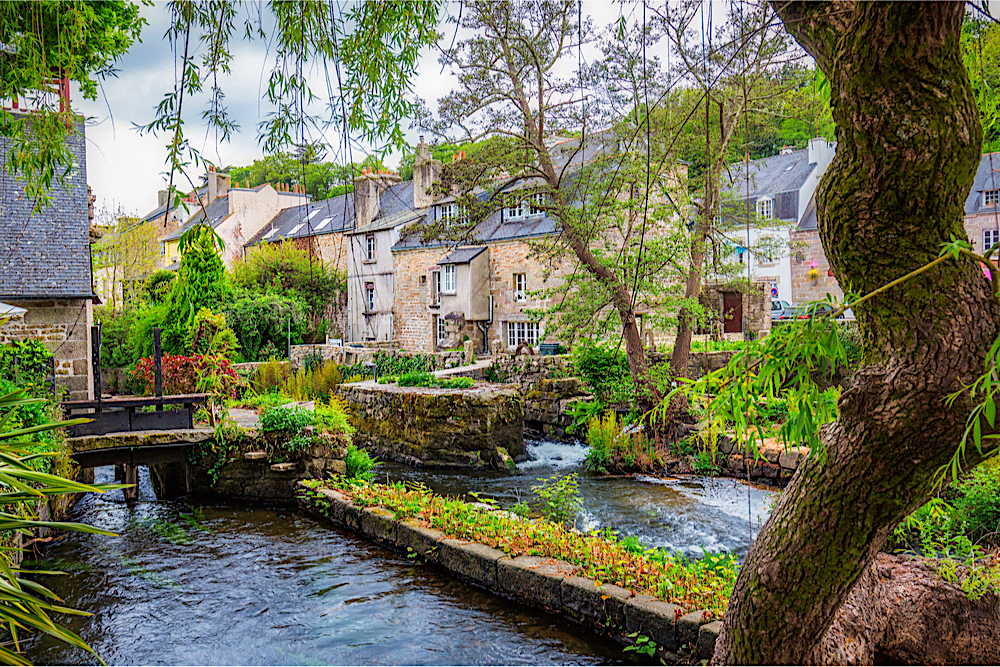 Pont-Aven is famous for group of artists who flocked round Émile Bernard and Paul Gauguin, and who were joined in 1888 by Paul Sérusier. They were collectively known as "Pont-Aven School”. Pont Aven still attracts artists and art lovers with many commercial galleries in addition to the town's public gallery. 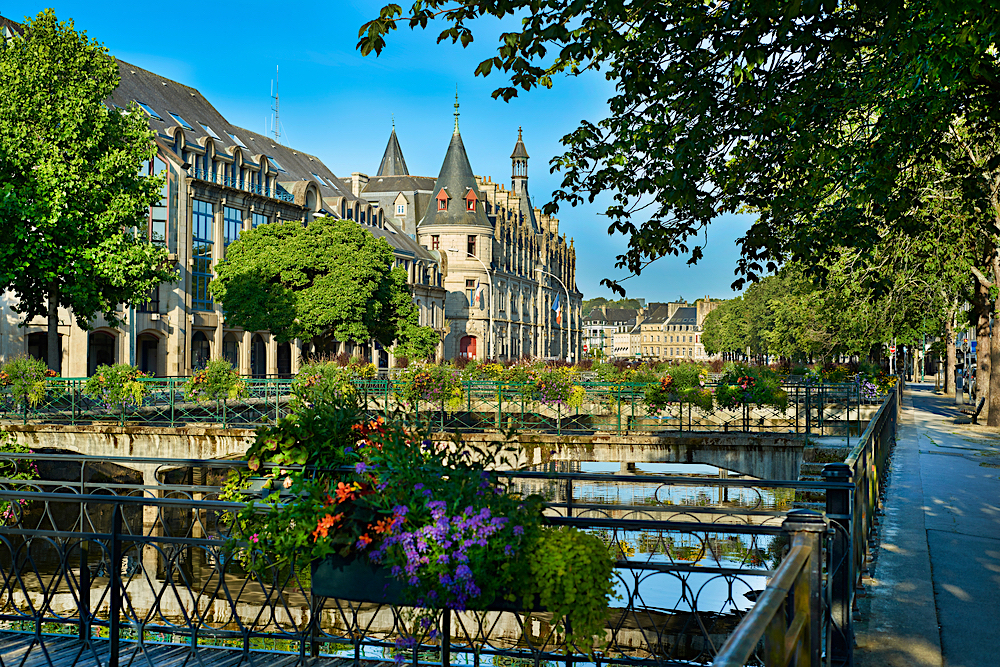 Quimper is the ancient capital of Cornouaille, Brittany’s most traditional region, and has a distinctive Breton Celtic character. Its name is the Breton word kemper (cognate to Welsh cymer), meaning "confluence". The town developed at the confluence of the rivers Le Steir and L'Odet. Shops and flags celebrate the region's Celtic heritage. 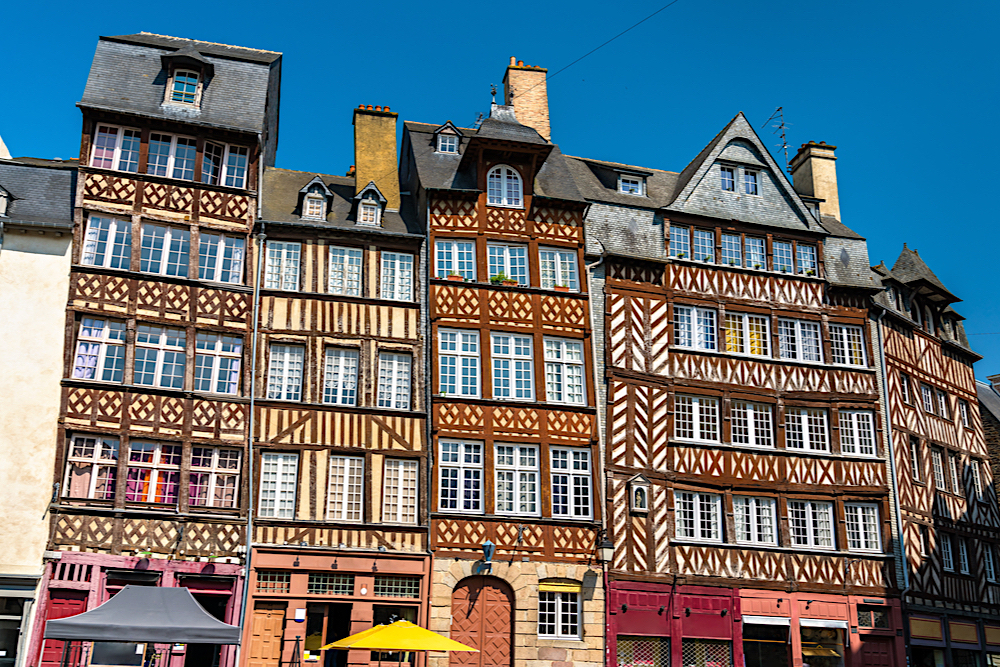 Rennes is the capital city of Brittany and known for its medieval half-timbered houses and grand Rennes Cathedral.  South of the Vilaine river, the Musée des Beaux-arts displays works by Botticelli, Rubens and Picasso. 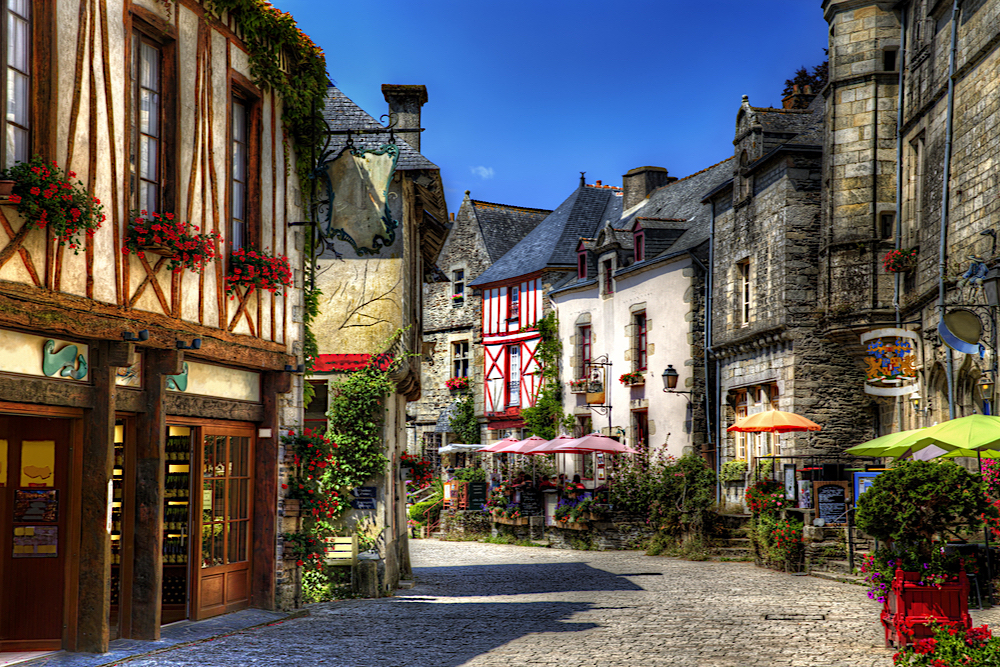 Rochefort-en-Terre is a designated “Petite Cité de Caractère”. The medieval chateau located in the town was the home of American painter Alfred Klots. He purchased the chateau in the early 1900s and oversaw its restoration. His son Trafford Klots inherited the chateau and continued to paint there and entertain other visiting artists. After his death his wife donated the building to the French government. 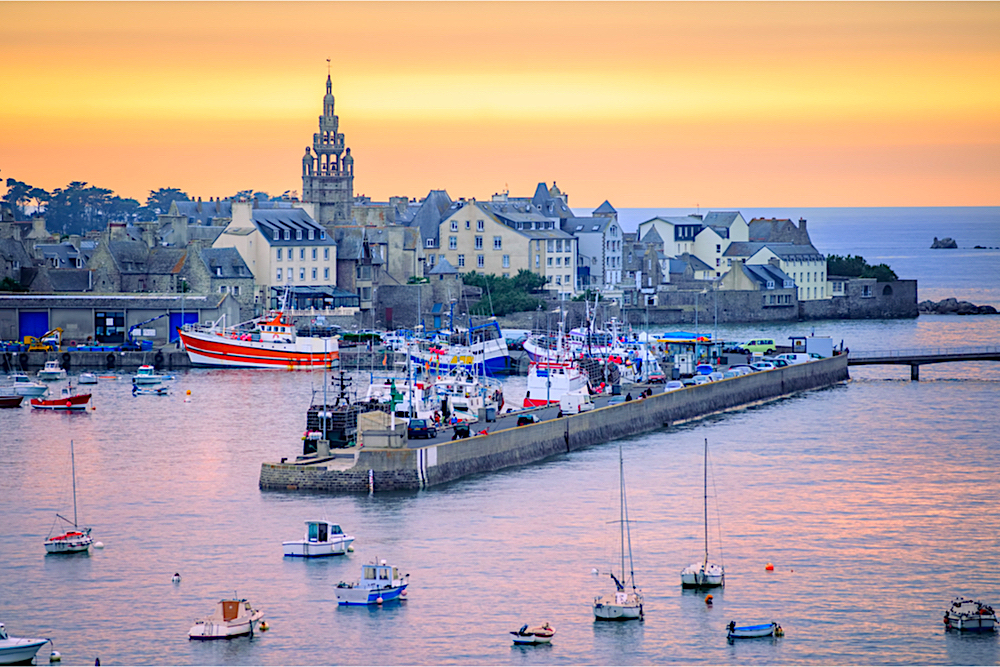 Roscoff is a commune in the Finistère département and famous for its picturesque architecture. It has been labelled petite cité de caractère de Bretagne since 2009. 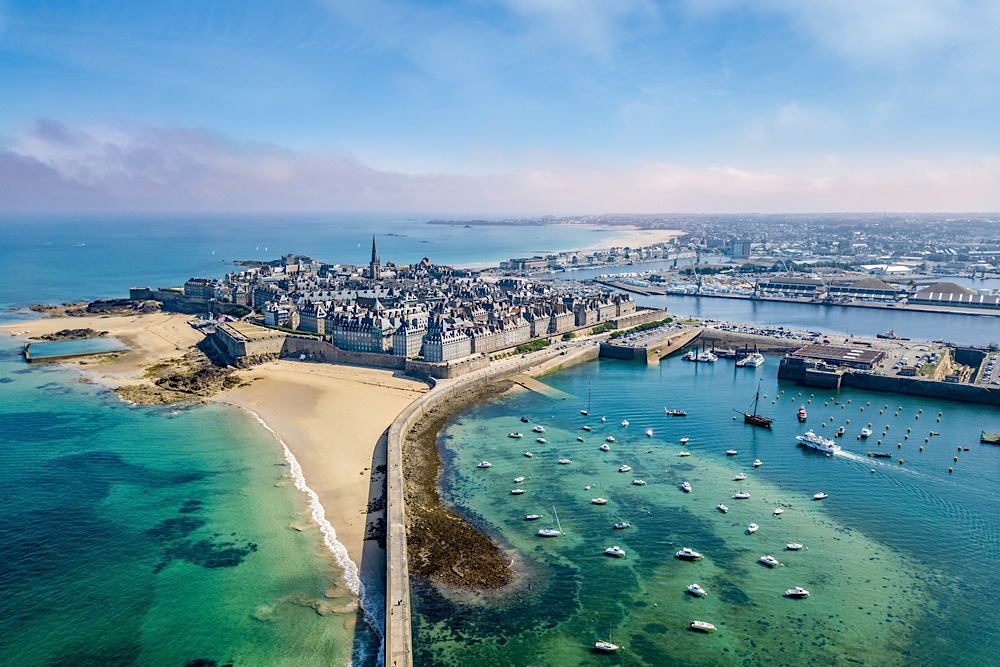 Saint-Malo is a historic French port in Ille-et-Vilaine on the English Channel coast.The walled city had a long history of piracy, earning much wealth from local extortion and overseas adventures. In 1944, the Allies heavily bombarded Saint-Malo, which was garrisoned by German troops. The city has changed into a popular tourist centre, with a ferry terminal serving the Channel Islands of Jersey and Guernsey, as well as the Southern English settlements of Portsmouth, Hampshire and Poole, Dorset. 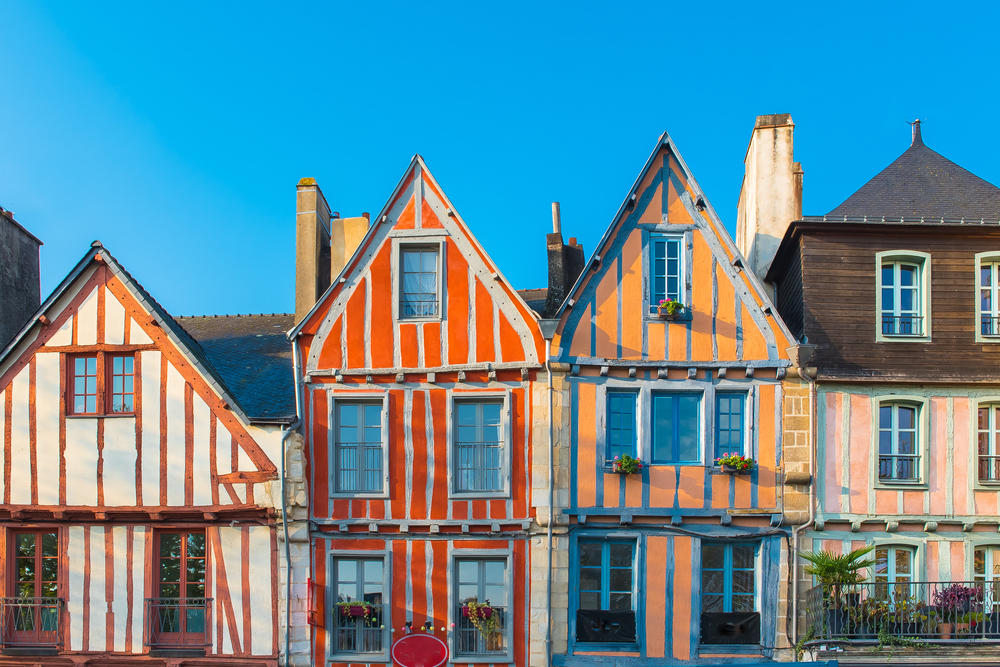 The old town of Vannes is characterized by narrow cobbled streets and medieval gates. At its heart, Cathédrale Saint-Pierre de Vannes blends Romanesque and Gothic styles, while Place des Lices square is lined with colorful half-timber houses. The harbor, to the south, features restaurants and boats that cruise the Gulf of Morbihan. 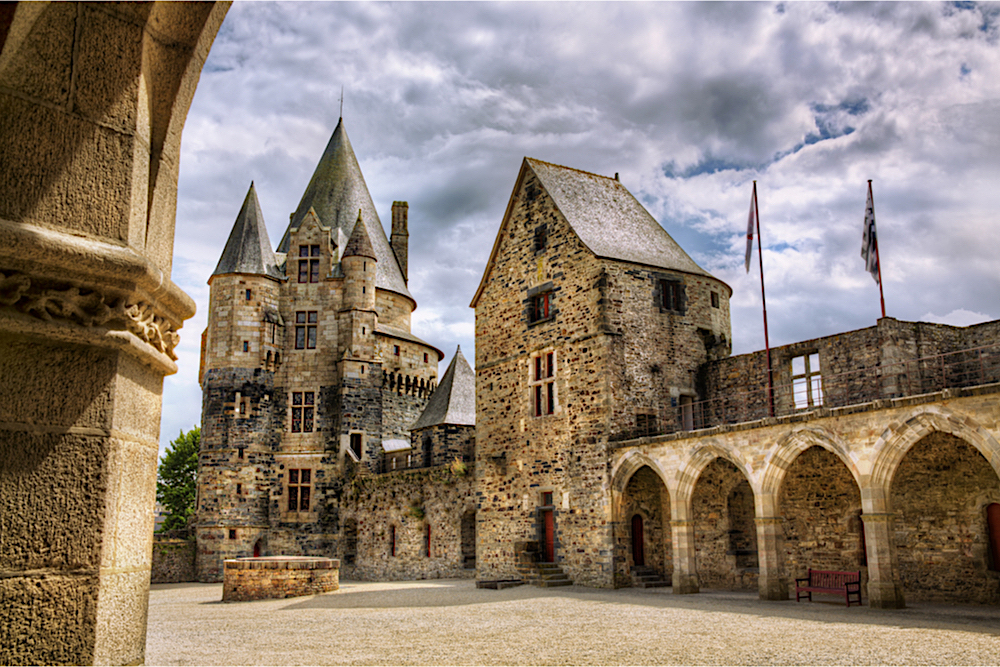 On the frontier between France and Brittany, Vitré was once one of the region’s most important towns. The most atmospheric street in Vitré is Rue de la Baudrière, where you’ll find grand high-rise half-timbered houses. These were built by merchants who made their money from the cloth trade; the town had a thriving canvas industry from the 14th century. Dating from the 13th century, the castle, with its pointy slate turrets, hosted the Parlement de Bretagne on three occasions in the 16th century when plague ravaged Rennes. These days it houses a museum where you can learn more about its history and the town. 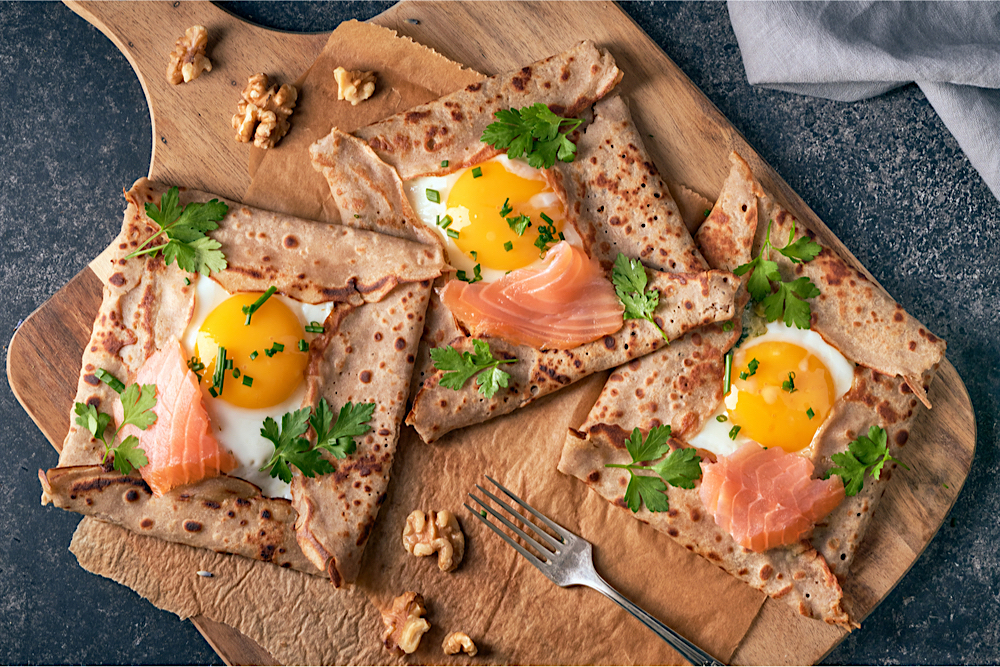 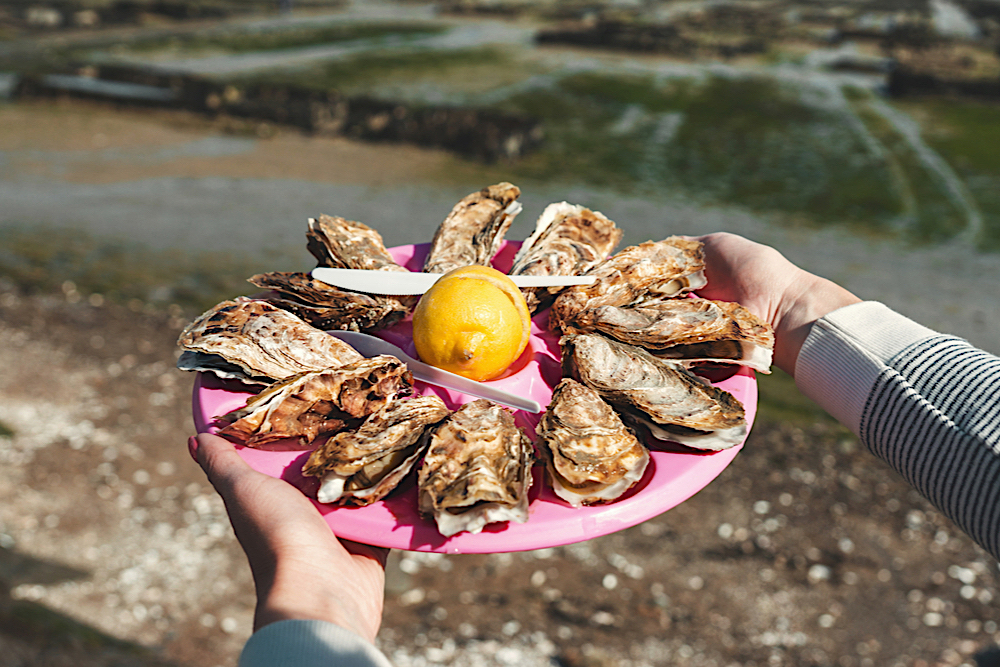 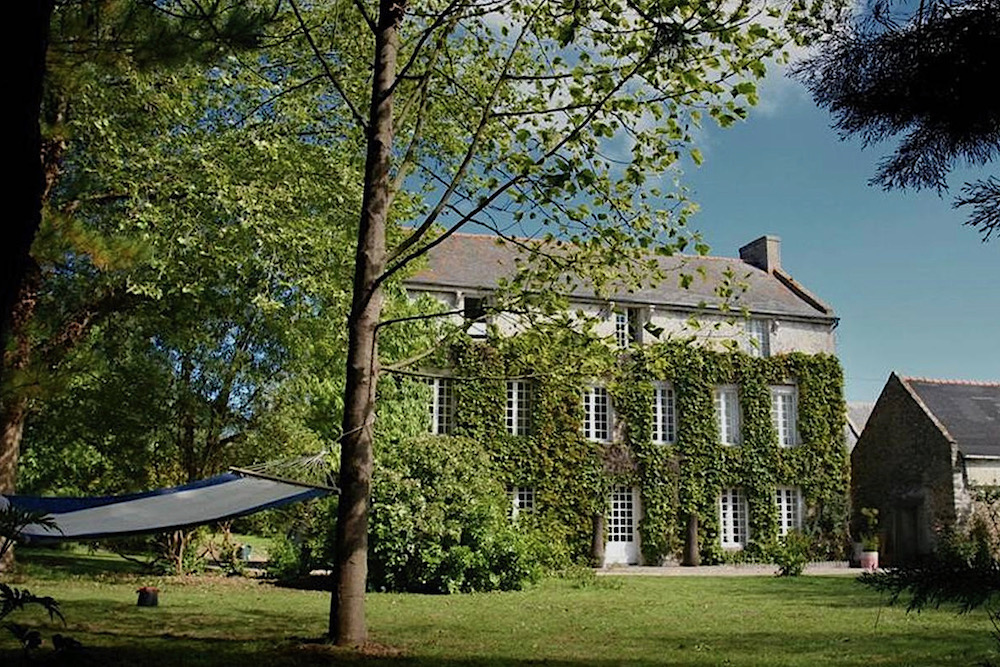 In the heart of lush greenery between Rance and the sea, the family welcomes you to the Haute Flourie, a charming house, which has been inhabited for a time by René Duguay Trouin, a famous corsair from St-Malo. They will share with you their guest rooms, beautiful Brittany and particularly the Emerald Coast. 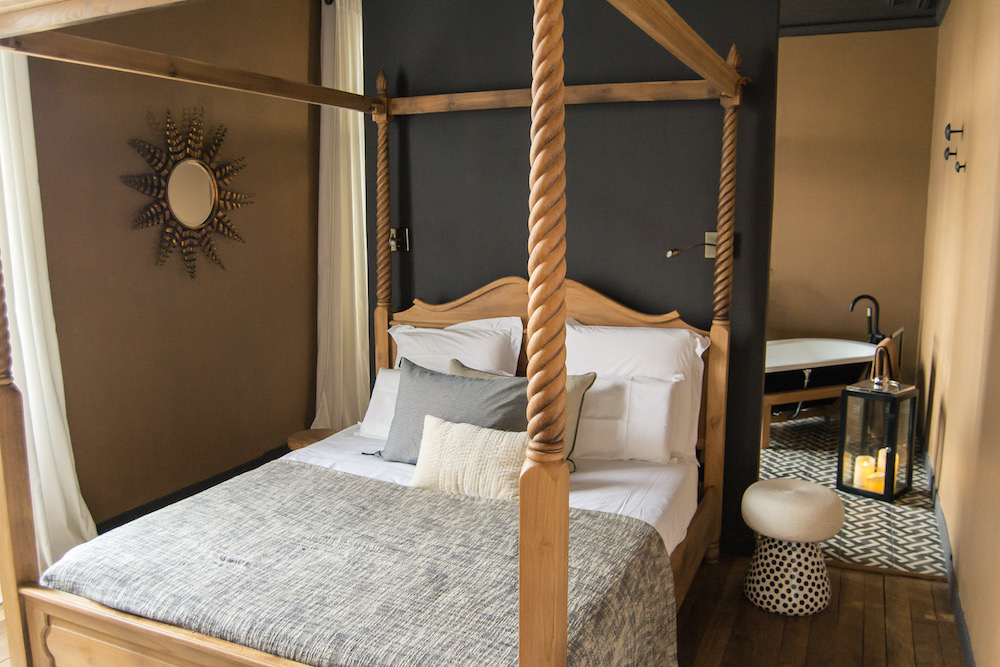 Villa Louisa is located in a quiet street in the heart of the Saint-Servan neighborhood in St Malo. A 19th century mansion, this residence was for a long time home to the Banque de France - the vault room still remains. Behind the gates of the garden opens a cocoon of tranquility for travelers, who enjoy the peace and comfort of their suites or rooms and can take advantage of the garden and its terraces, especially for breakfast during the summer. Completely renovated, Villa Louisa now has four guest rooms, two of which are independent from the main house. 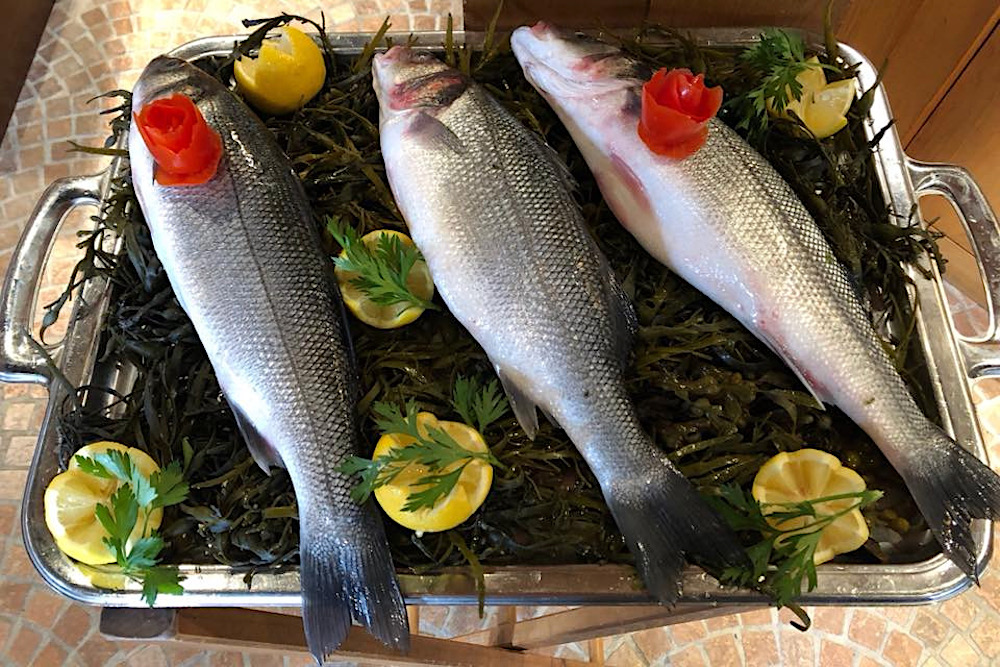 The Brasserie du Sillon is located facing Sillon beach, a 10-minute walk from the ramparts of St Malo. Spoil yourself and savour superb seafood and regional specialities in a cozy, privileged setting. 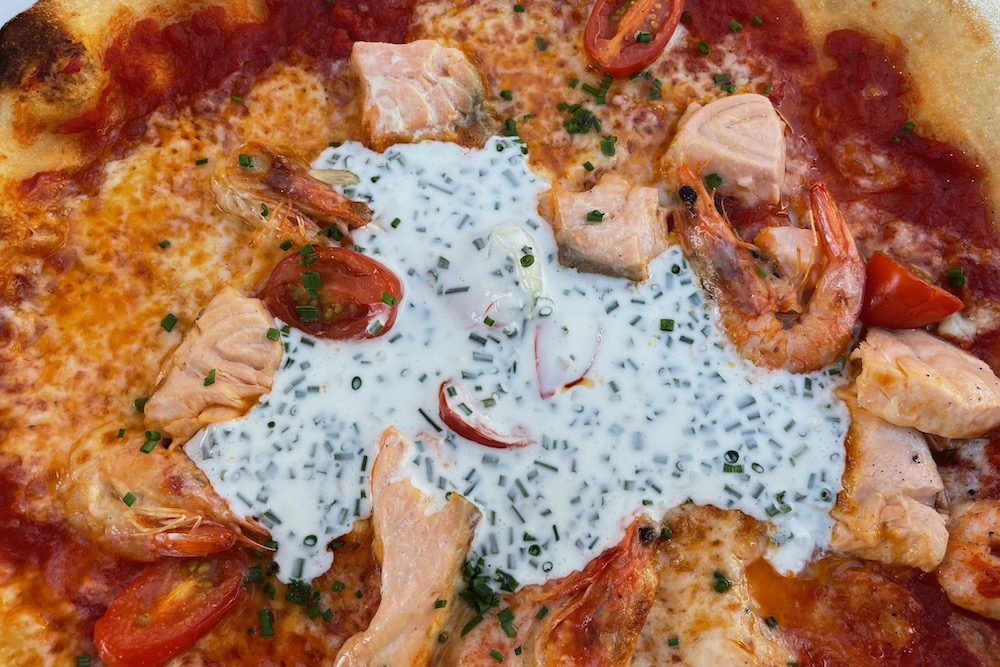 Located in a perfect setting in the old town of St Malo known as “Intra-Muros”, the Les Voyageurs brasserie pizzeria will delight you with their delightful bistro food  and superb pizzas. 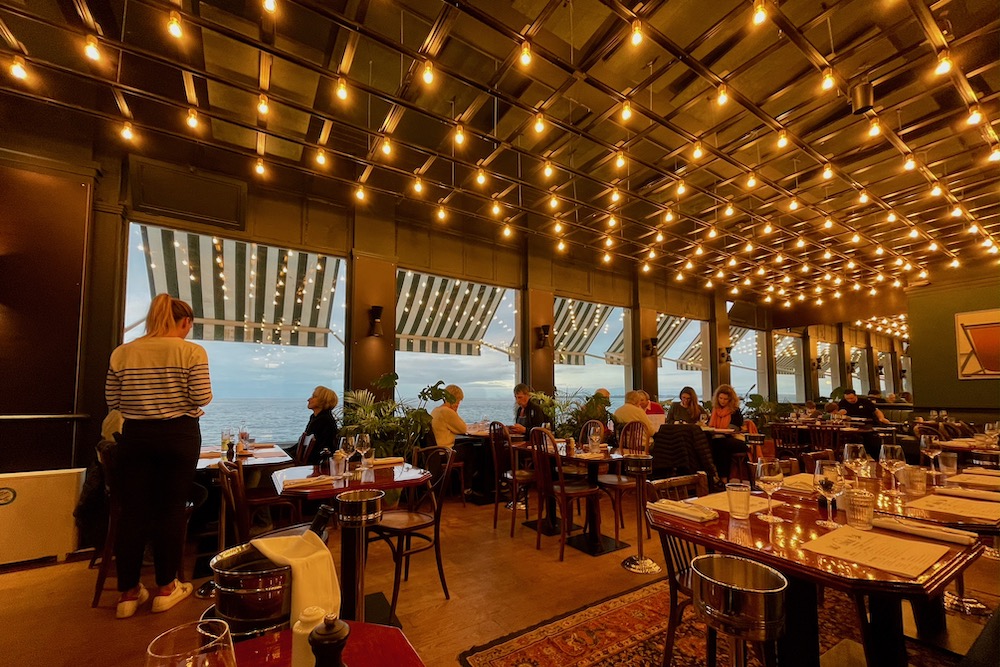 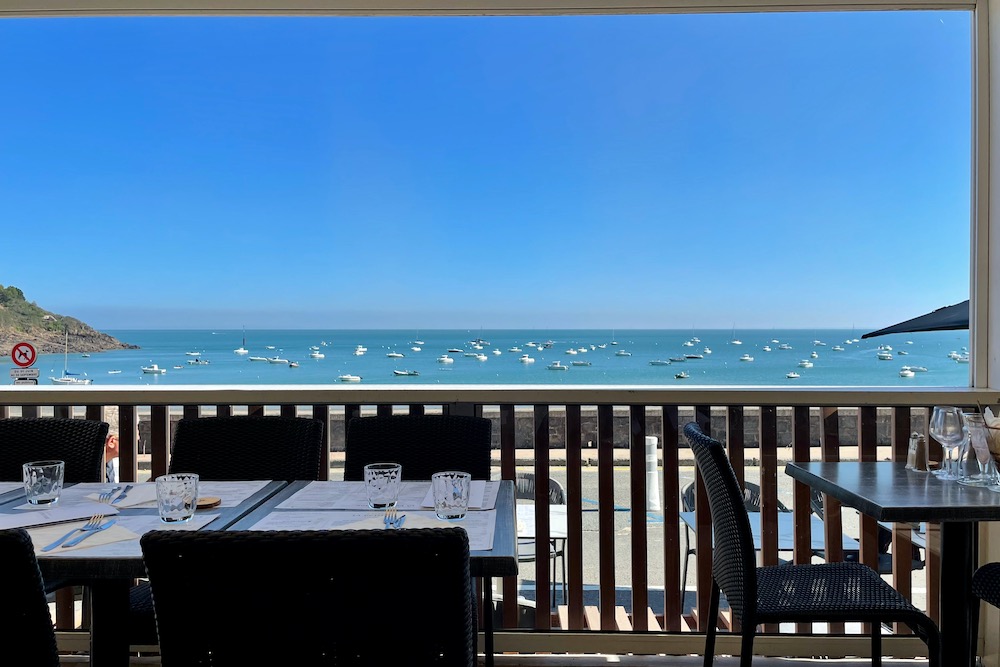 Located not far from the Pointe du Grouin, directly opposite the beach of Port Mer, the restaurant offers traditional cuisine.  Taste the house specialties according to the market and the seasons. You can enjoy a  beautiful, spacious dining area inside or the superb outside covered terrace bordering the big blue,…. A unique place, you will almost have your feet in the water and enjoy a magnificent view of the bay of Mont Saint Michel. 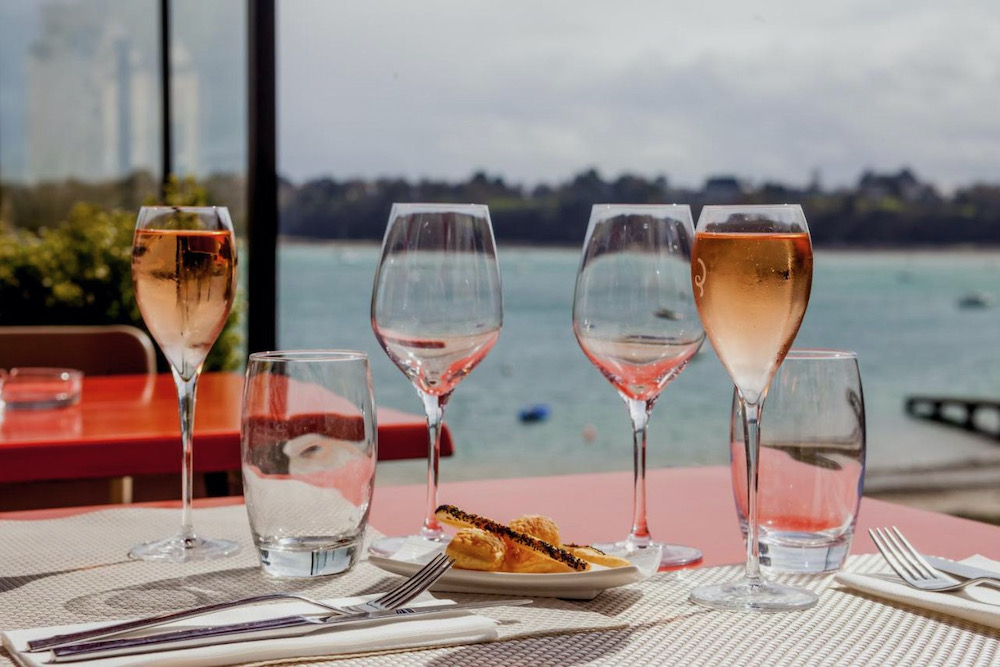 Sheltered from the summer crowds but in the heart of Dinard, you will taste the best wild and local fish in the region, the finest shellfish. Refined cuisine, with fresh, local, Breton and seasonal products, a real mix of flavours to pleasure your taste buds in a warm and attentive atmosphere.

WHEN TO GO: Between March and October most places are open everywhere along the coast – and there's a reasonable chance that the sun will be out, too. We visited Brittany in October 2021 & experienced fine weather.

HOW TO GET AROUND: Rent a car to truly experience the many delights of Brittany.