Sardinia has nearly 2,000km of coastline, sandy beaches and a mountainous interior crossed with hiking trails. Its rugged landscape is dotted with thousands of nuraghi – mysterious Bronze Age stone ruins shaped like beehives. One of the largest and oldest nuraghi is Su Nuraxi in Barumini, dating to 1500 B.C. 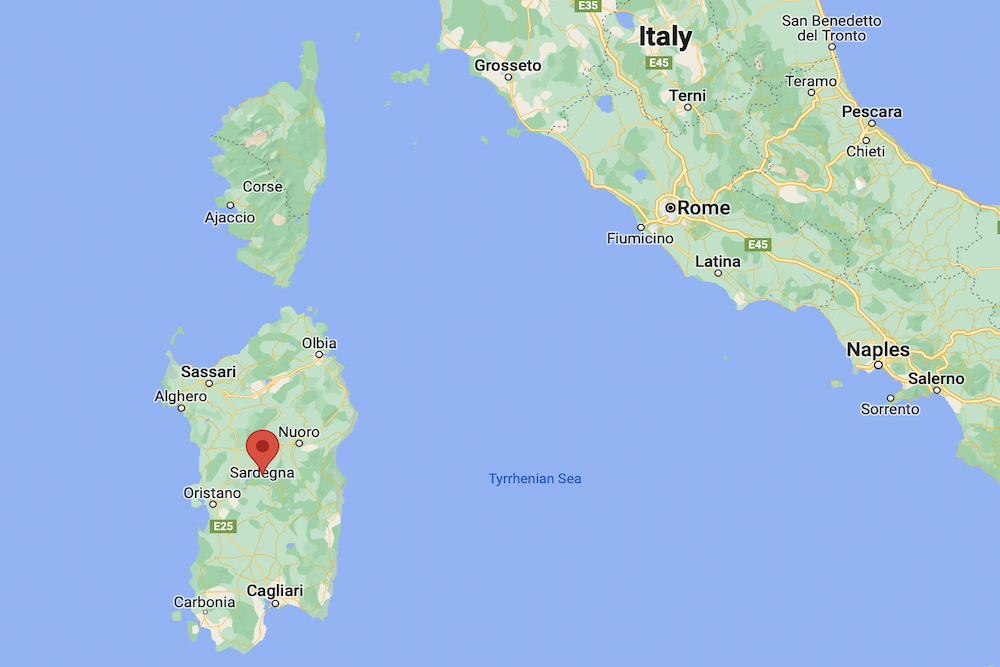 EXPLORE THESE 7 LOCATIONS & 7 BEACHES IN SARDINIA: 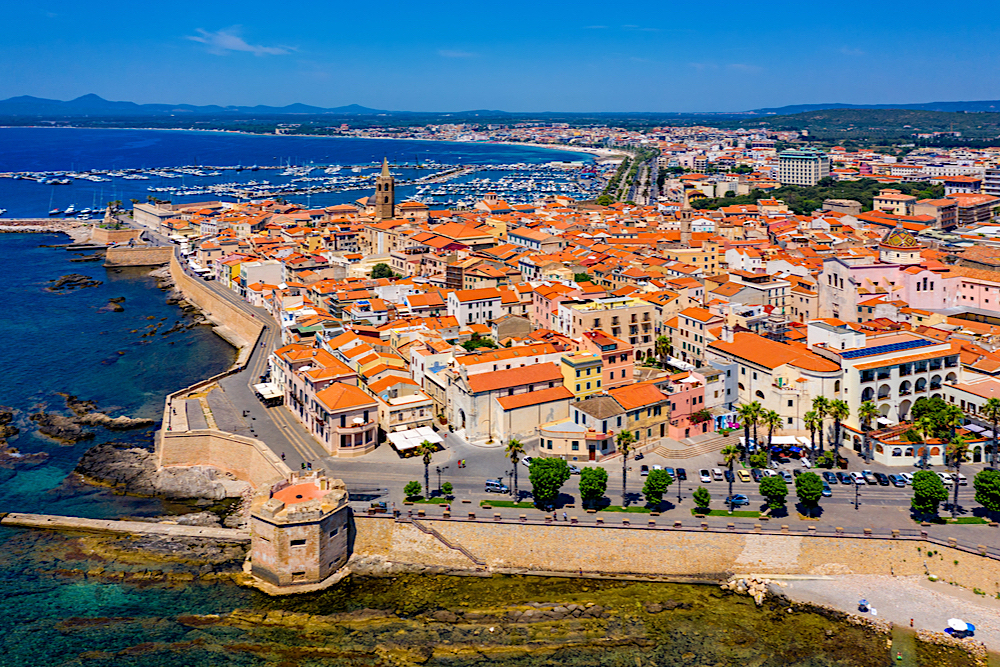 Alghero is a city on the northwest coast of Sardinia, Italy. Encircled by ancient walls, it’s known for its cobblestoned old center. Its Catalan Gothic buildings include the Cattedrale di Santa Maria, with an imposing bell tower, Palazzo Guillot and Chiesa di San Francesco, a 14th-century church. 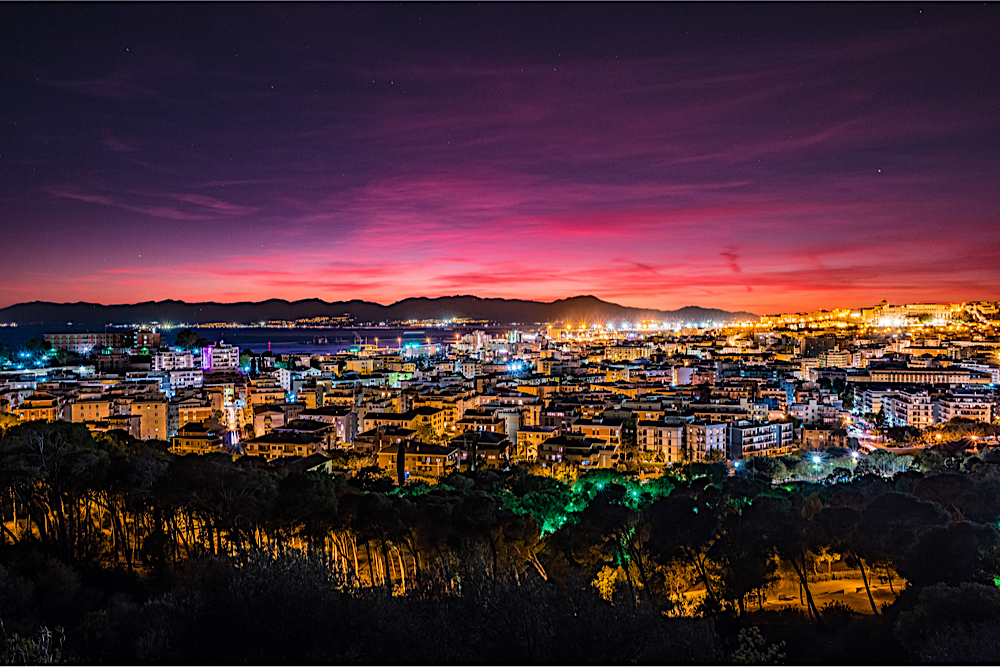 Cagliari is the capital city of Sardinia. It’s known for the hilltop Castello, a medieval walled quarter situated high over the rest of the town. Architectural highlights include the 13th-century Cagliari Cathedral. 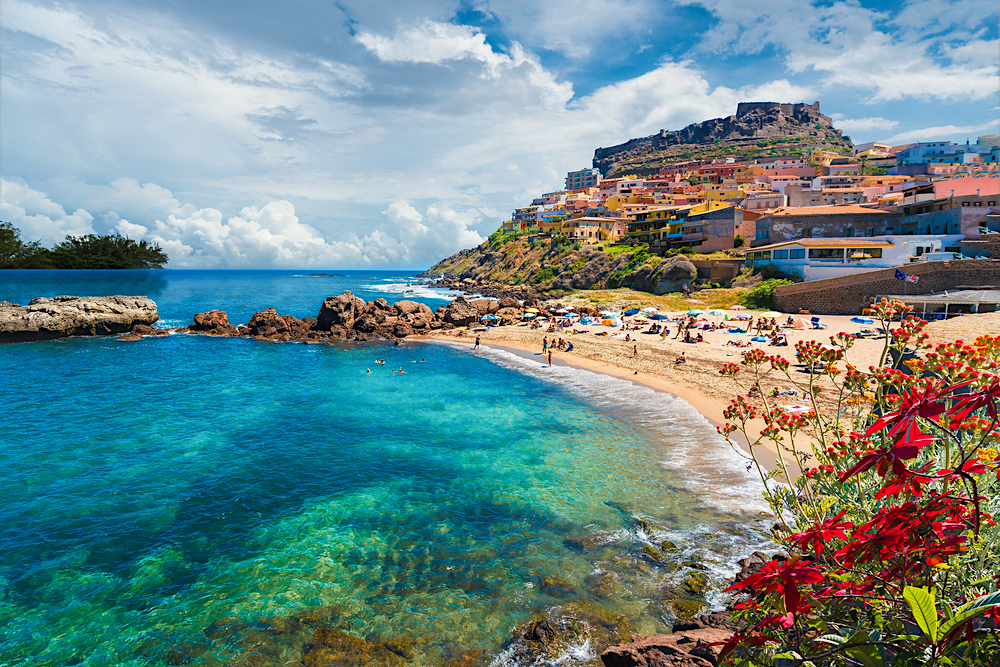 Castelsardo is a picturesque town located just a short distance from Badesi in north Sardinia. This historic town is best known for its ancient castle, but it also has beautiful sandy beaches. 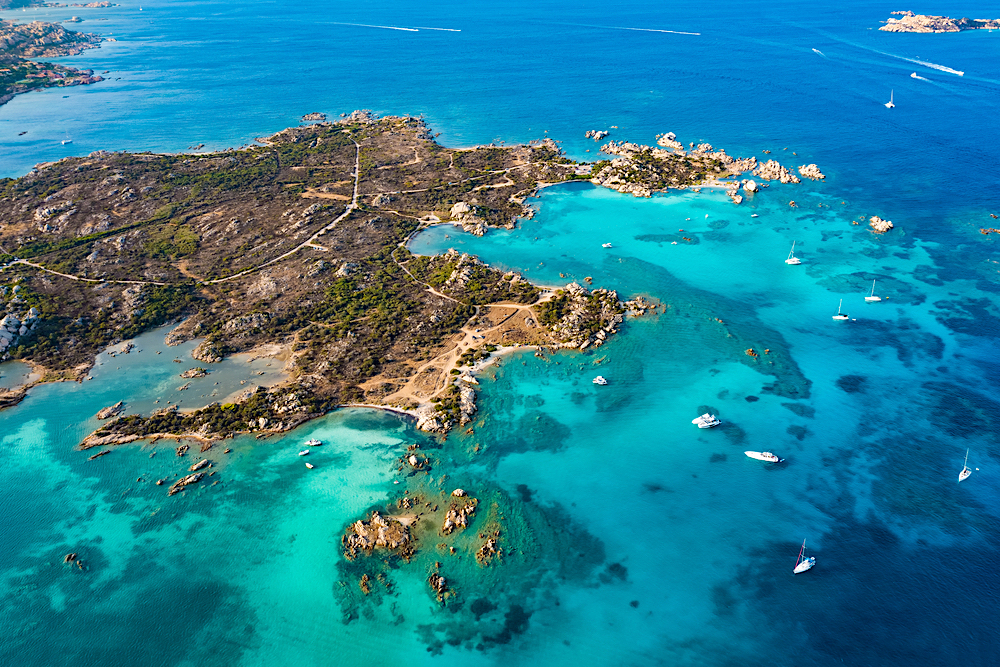 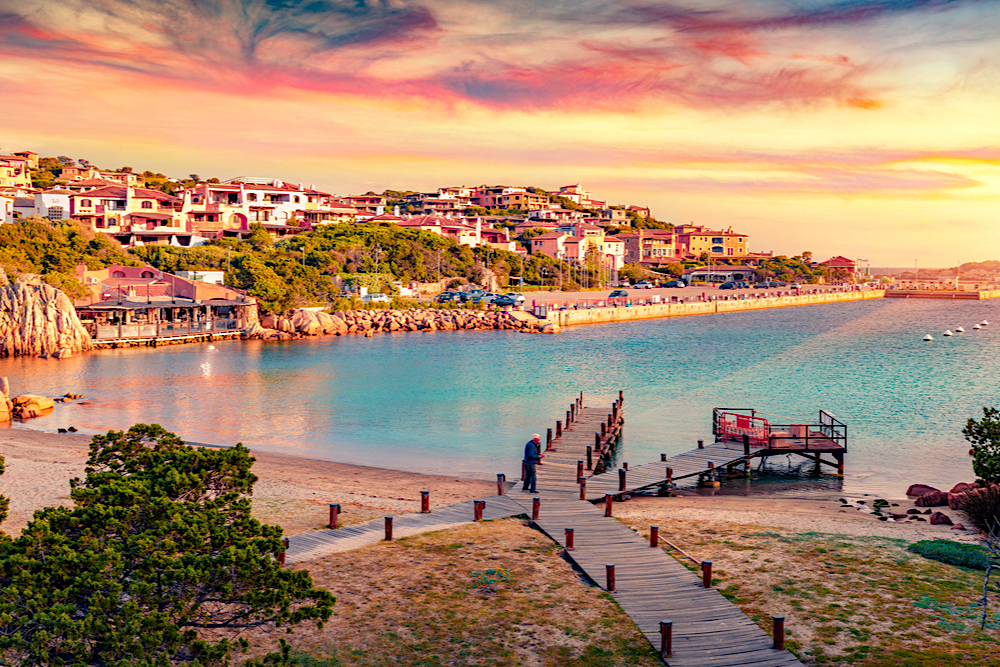 Porto Cervo is a seaside resort in northern Sardinia. It is a frazione of the comune of Arzachena, in the province of Sassari. Created by Prince Karim Aga Khan and various other investors, Porto Cervo is the main centre of Costa Smeralda. It has a resident population of 421 inhabitants. 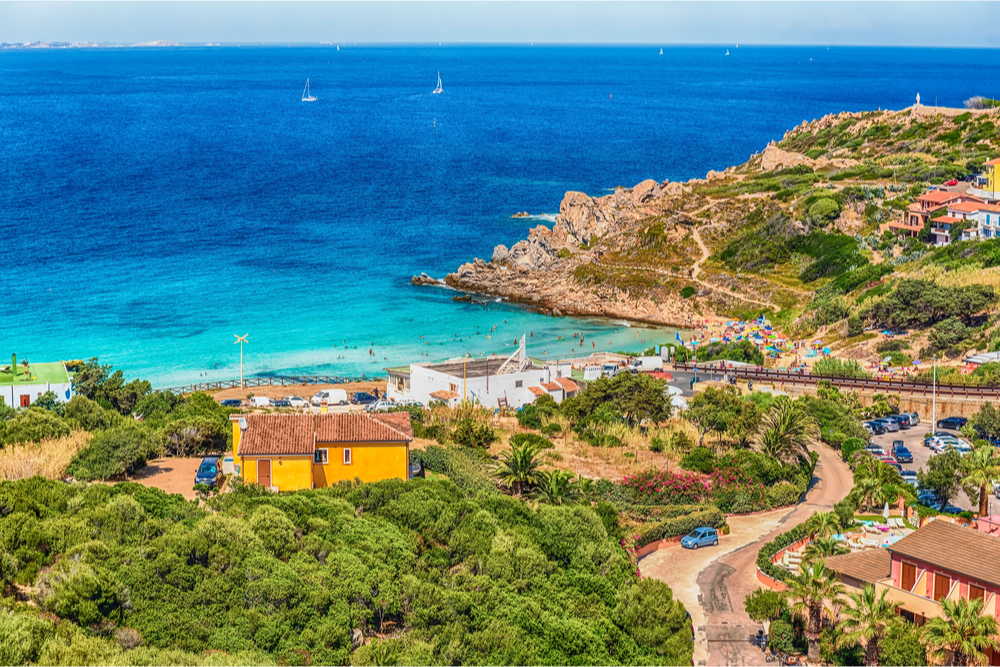 Santa Teresa Gallura is a town on the northern tip of Sardinia, on the Strait of Bonifacio, in the province of Sassari, Italy. The southern coast of Corsica can be seen from the beach. The city is one of several possible locations for the ancient city of Tibula. 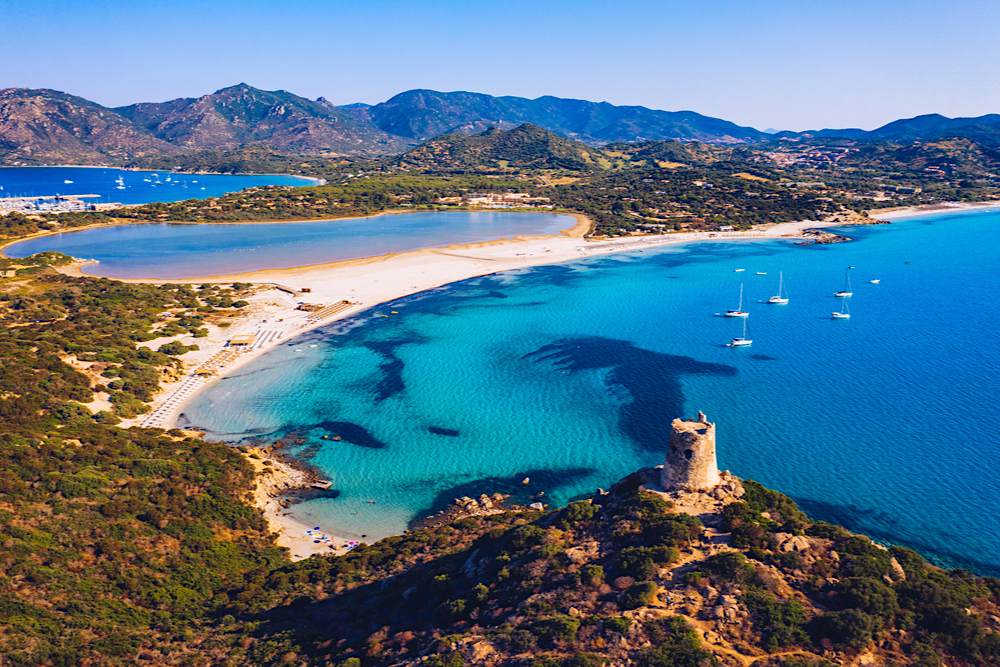 Villasimius is a coastal town in southeast Sardinia, Italy. The Marine Protected Area Capo Carbonara has barracuda, seagrass meadows and dive sites. Nearby, the Stagno di Notteri lagoon is visited by migrating flamingos in winter. Starting from the beach of Porto Giunco, the Sentiero delle Cave path leads to a 16th-century watchtower. West are the medieval Old Fortress and the white-sand Spiaggia del Riso beach. 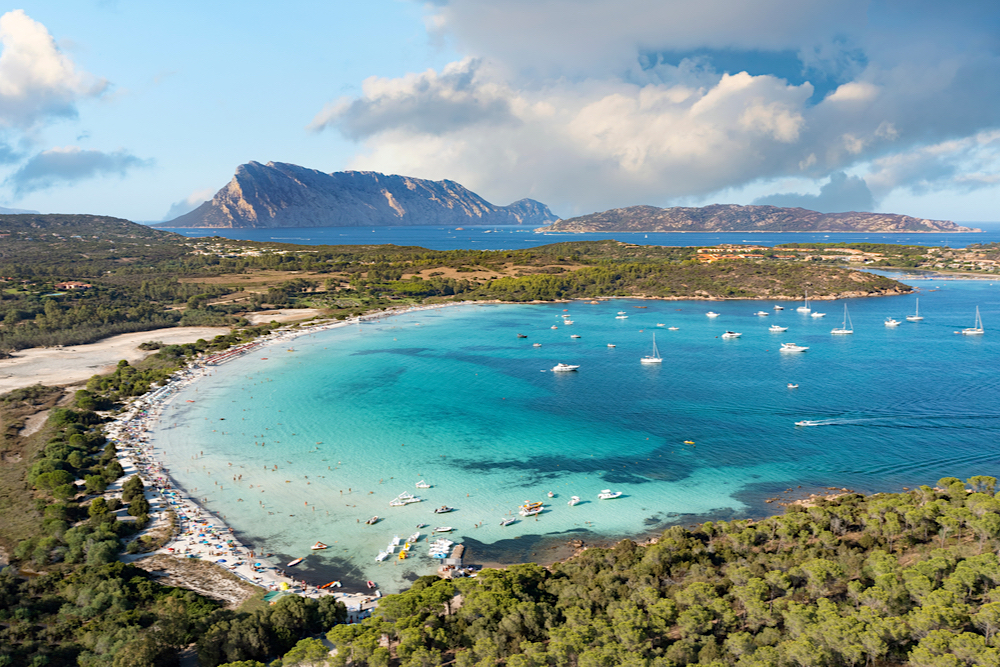 Cala Brandinchi is an extremely popular cove set between Olbia, the getaway to Costa Smeralda, and San Teodoro in Gallura, northwestern Sardinia. 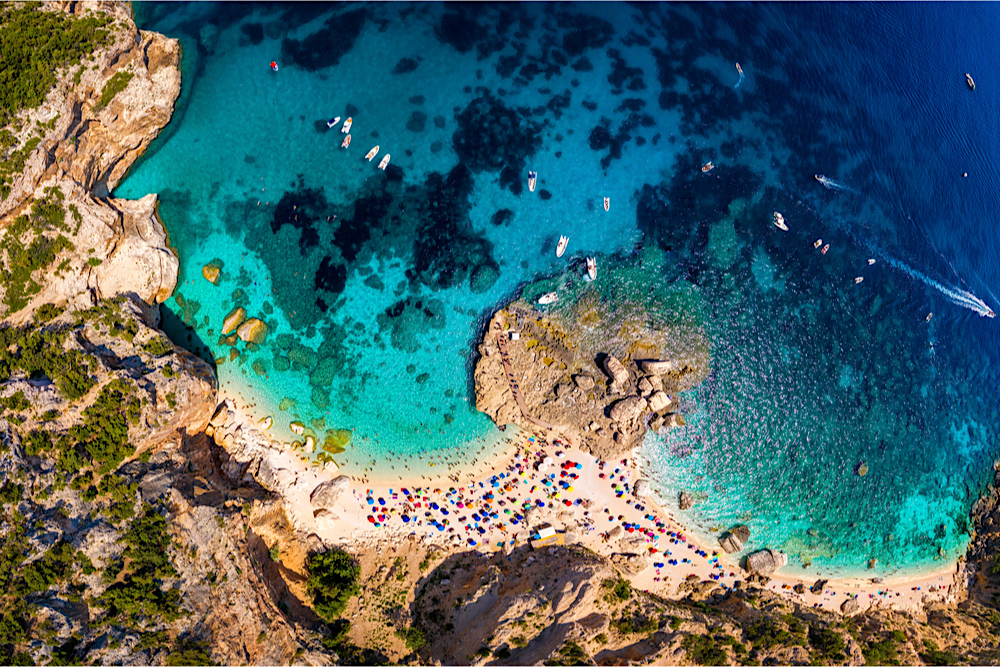 Cala Goloritzé  is located in the town of Baunei, in the southern part of the Gulf of Orosei, in Ogliastra, Sardinia. The beach, one of the most evocative of Sardinia, was created by a landslide in 1962.

One of the wonders of the Gulf of Orosei, as well as the symbol of the eastern coast of Sardinia. Cala Luna is located half way between the territories of Baunei and Dorgali and is characterized by the mouth of the Codula di Luna torrent. 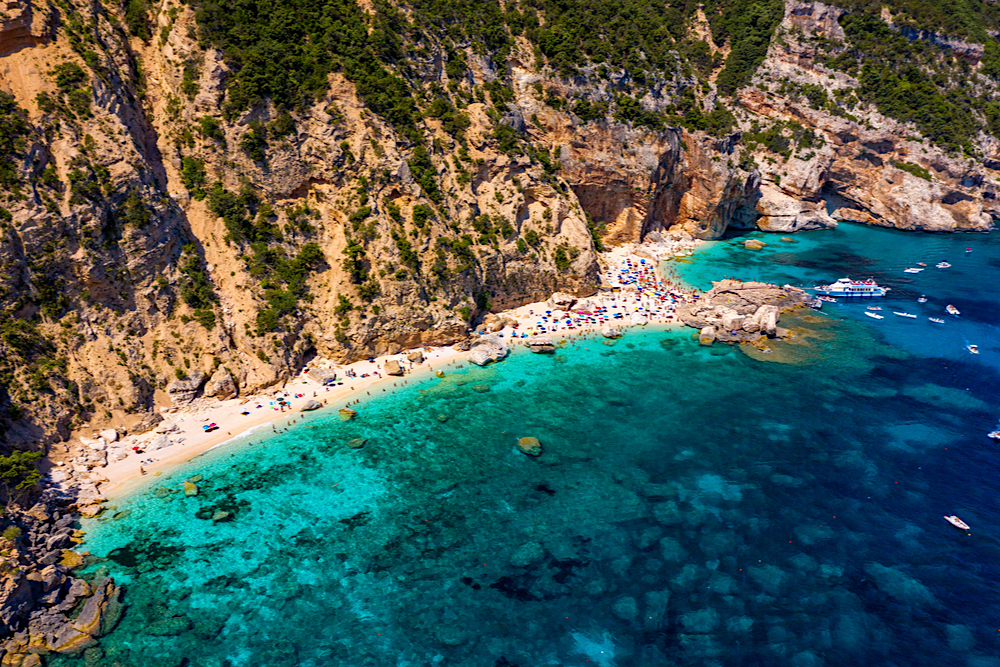 The cove is located just north of Cala Goloritze and is can only be reached on foot or by boat. If you’re coming on foot, the hike to Cala Goloritze takes more than one hour, and the return trip will probably take you twice as long. 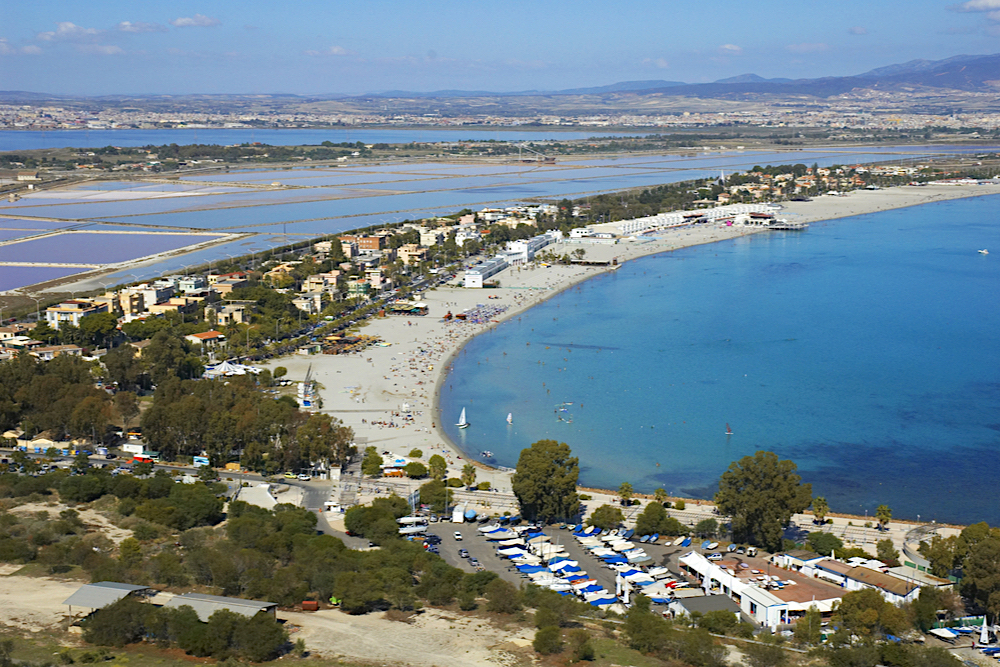 Poetto is the main beach of Cagliari in Sardinia, Italy. It stretches for about 8 km, from Sella del Diavolo up to the coastline of Quartu Sant'Elena. Poetto is also the name of the district located on the western stretch of the strip between the beach and Molentargius - Saline Regional Park. 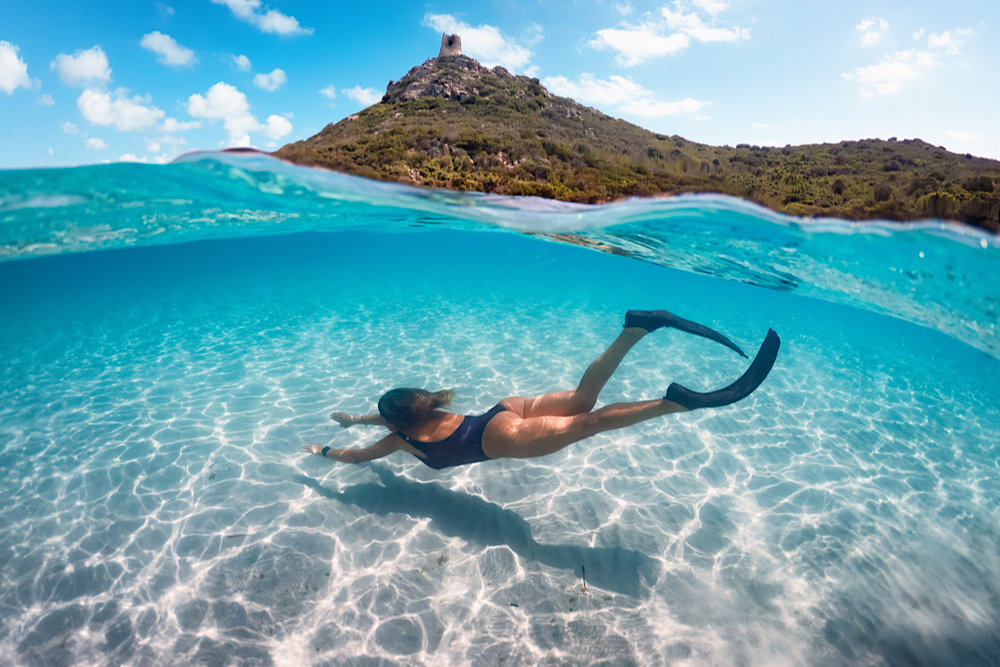 Porto Giunco is a tropical beach in the middle of the Mediterranean, one of the most famous on the island and one of Italy's most beautiful. 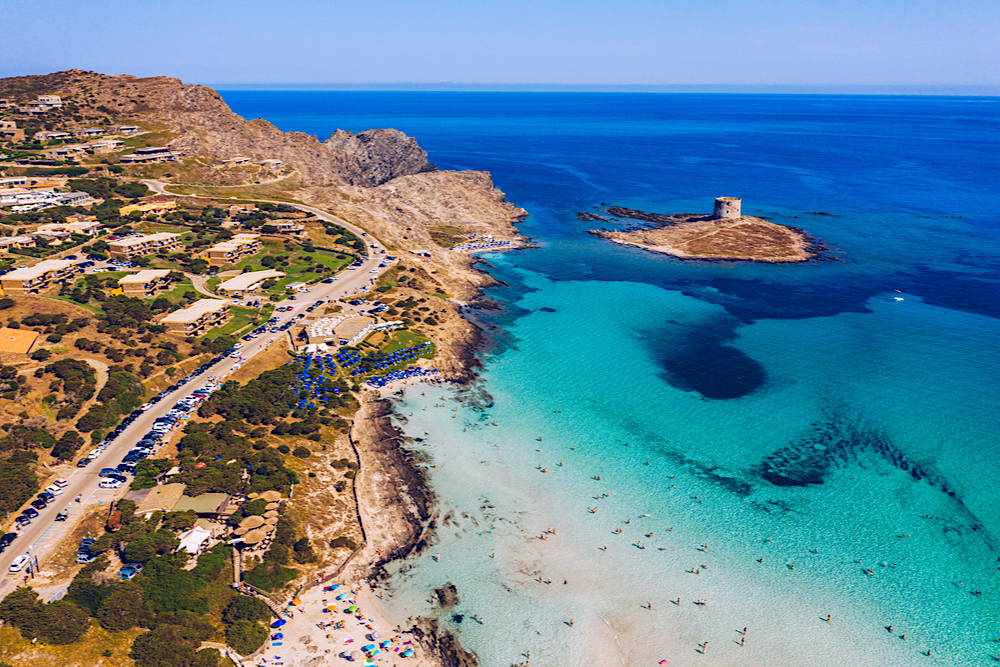 Lying at the foot of Capo Falcone on the north-western tip of Sardinia is one of the islands most stunning beaches. A stretch of white sand and shallow, turquoise waters make La Pelosa everything you could desire from a Mediterranean beach.

Sardinia has much more to offer than just stunning scenery and fabulous beaches, savour these local delicacies: 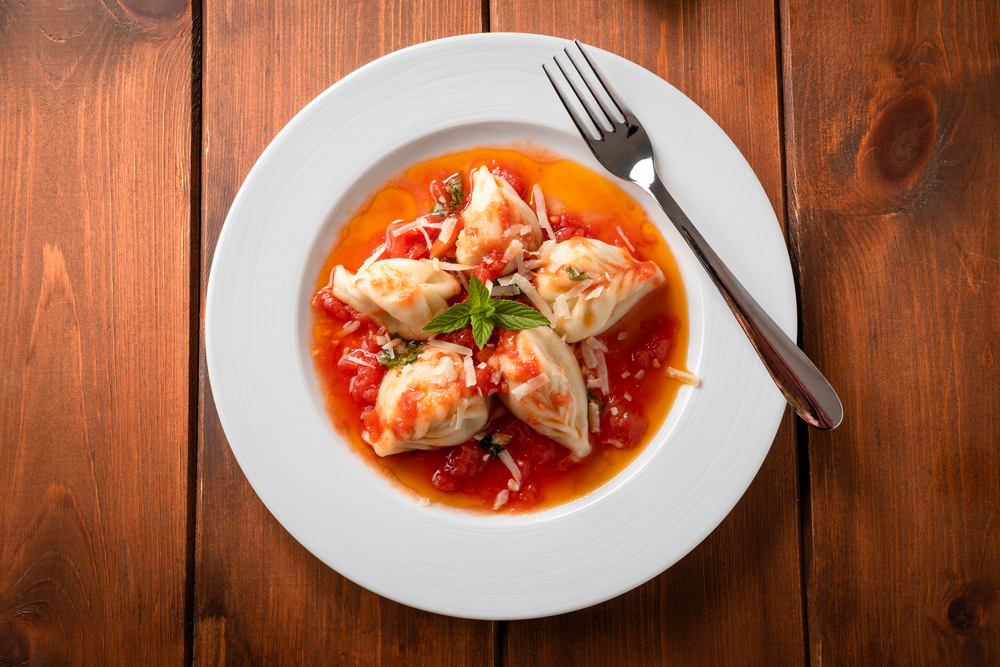 Culurgiones (or culurgionis) are a unique type of stuffed pasta originally from the Ogliastra, a mountainous area on the Eastern side of Sardinia. Similar to dumplings, they are traditionally stuffed with a creamy potato filling flavoured with pecorino and fresh mint and seasoned with a plain and simple tomato sauce that enhances the flavour of the filling. 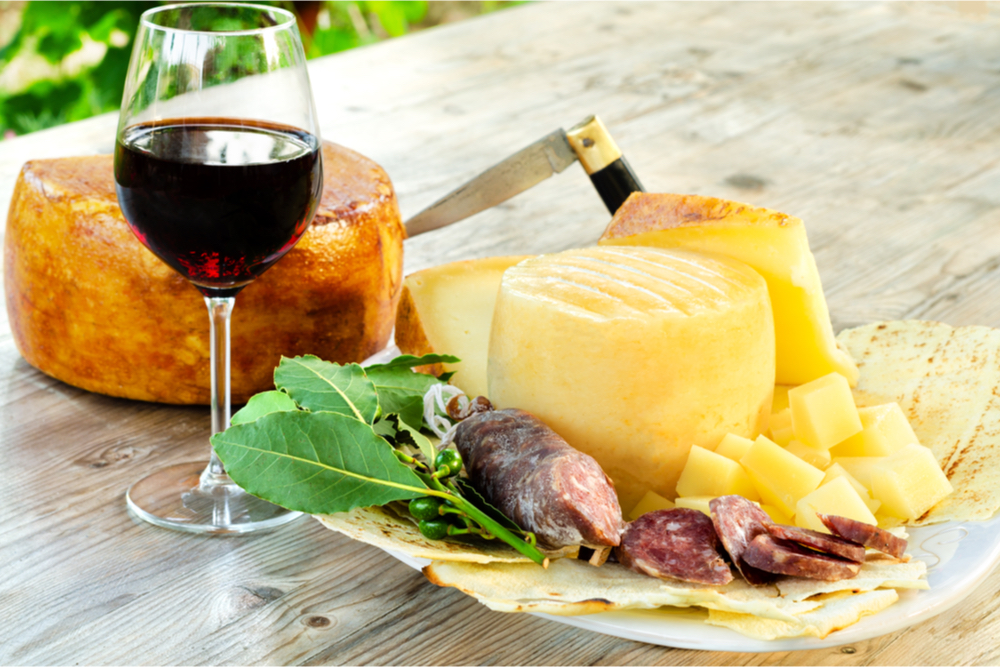 The cheese is obtained only from whole sheep’s milk and comes in two types: "sweet" and "ripe". The sweet one matures in 20 to 60 days; inside it is white, soft, compact when cut and its taste is aromatic, delicate, and slightly tart. The ripe variety is aged for 5 or 6 months. It is hard inside, the cut may be compact or chipped and the colour is white or slightly yellow. The flavour is very strong and intensely aromatic. 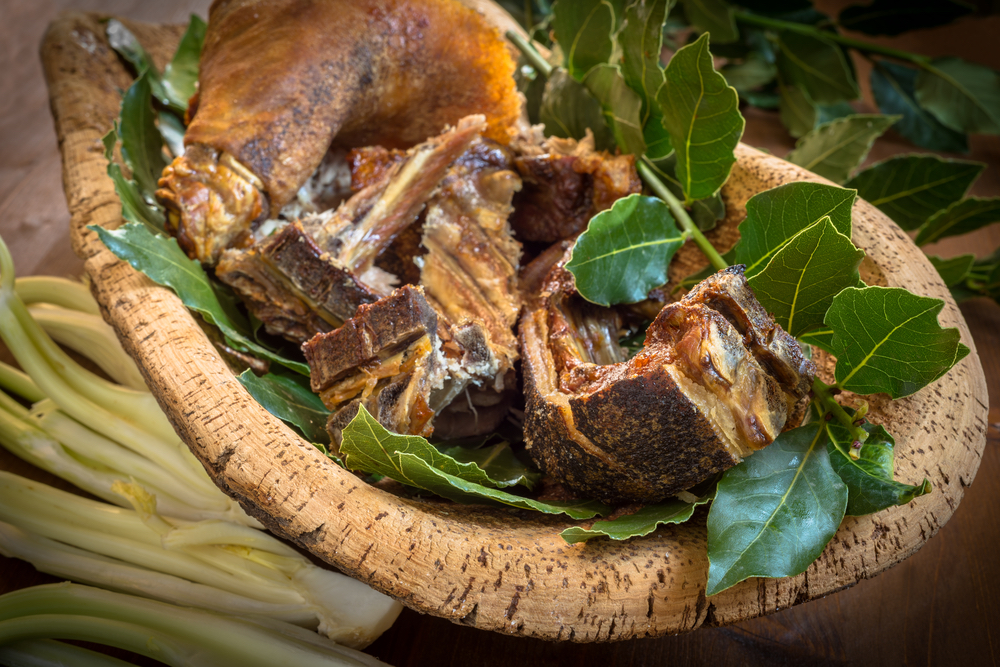 Porceddu is a simple yet a complex recipe made from roasted suckling piglet. This traditional dish of Sardinian cuisine is based on very simple ingredients where the body of piglet is cleaned and stuffed with meat, rosemary, herbs, fennel and others. Later, they are roasted conventionally over juniper or myrtle wood to produce a soft, moist and tangy boneless pork roast. 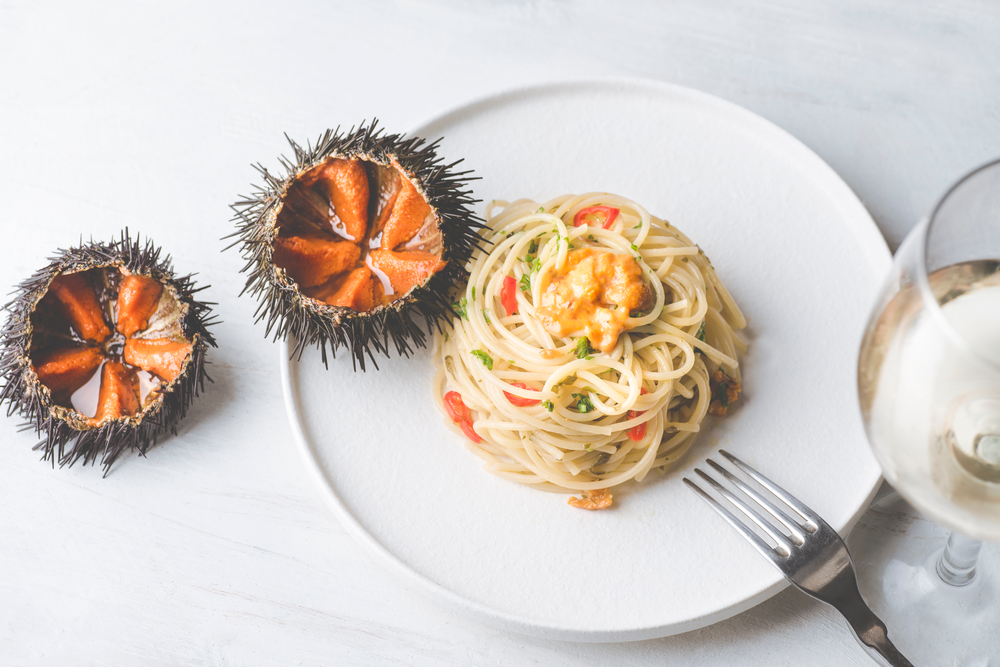 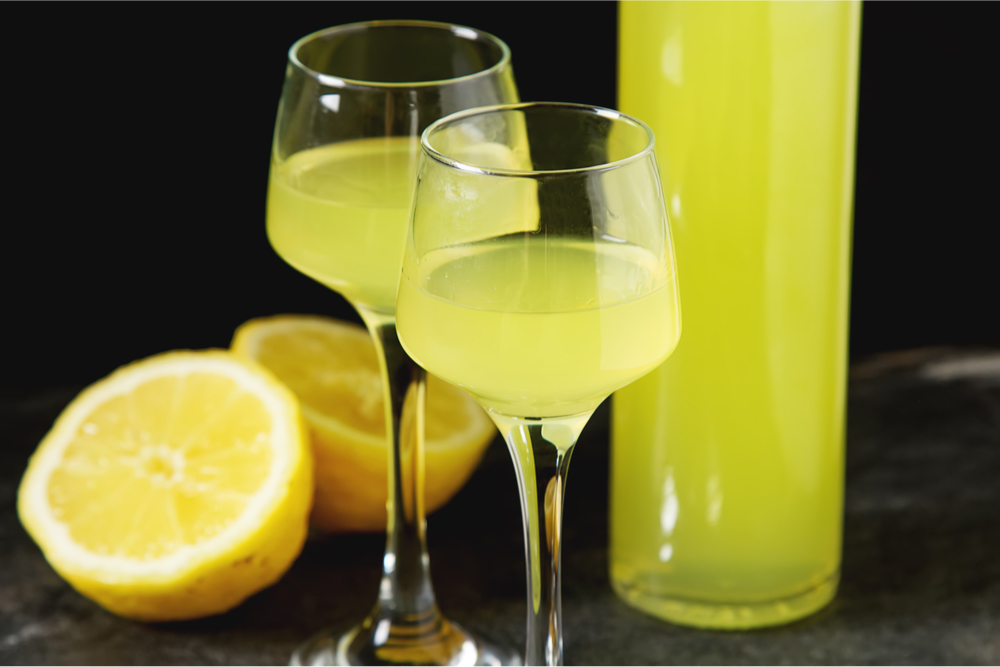 Limoncello is an Italian lemon liqueur mainly produced in Southern Italy.  It is the second most popular liqueur in Italy and is traditionally served chilled as an after-dinner digestivo.

WHEN TO GO: The best time to visit Sardinia is from April to June when the flowers are in bloom, the sea waters are warm, and the temperatures haven't yet reached their July and August highs.

HOW TO GET THERE: Plane or ferry. There are three airports:  Cagliari, the capital sitting on the south of the island; Alghero, in the northwest of Sardinia; and Olbia, in the Costa Smeralda region in the northeast.

HOW TO GET AROUND: Hiring a car is the best way to get out and about, giving you the freedom to explore the island at your leisure, but there are trains across the island and a bus service. 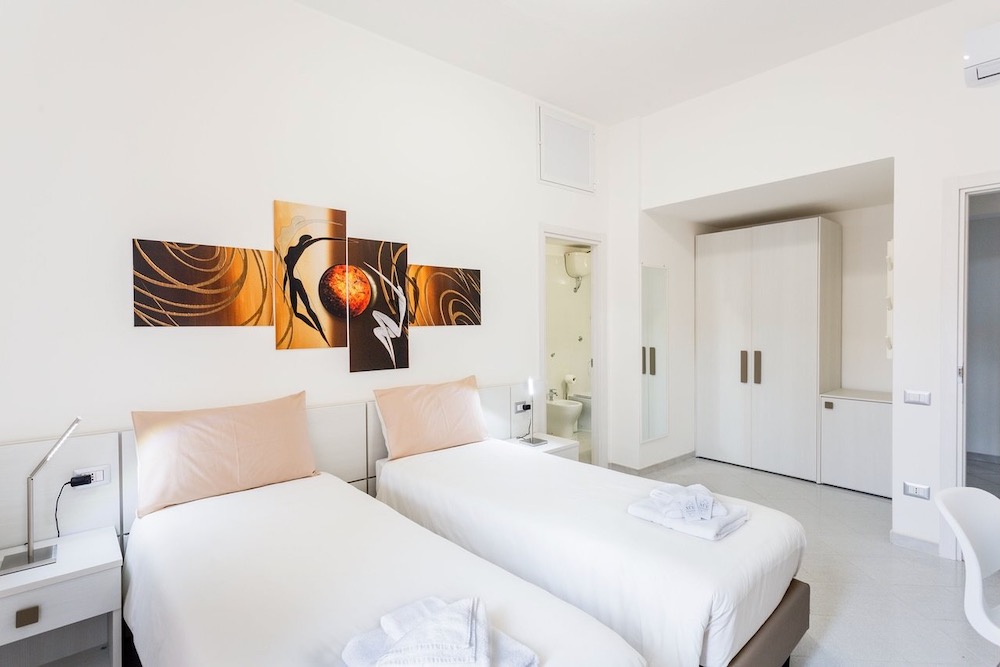 Upon your arrival, you will be welcomed in carefully cleaned rooms equipped with every comfort suitable to meet the needs of every type of guest! Ultra comfortable mattresses, always fresh and fragrant linen and a good breakfast will allow you to spend a pleasant and relaxing stay. 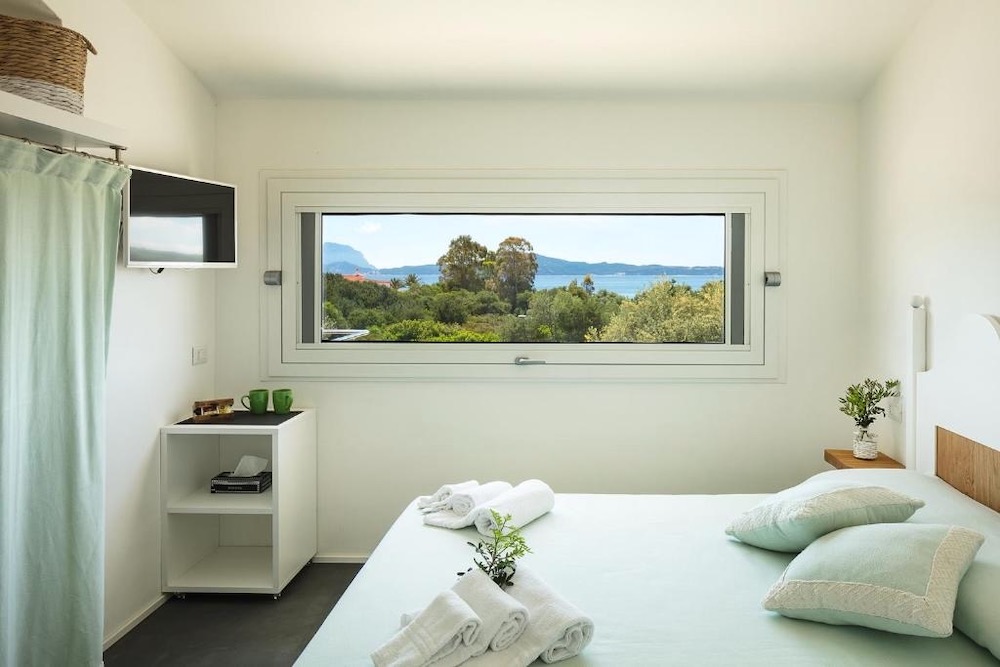 Sardegna è-Rooms and Villa Charme&Design is a new and confortable tourist accomodation located near Olbia, only a few steps away from both Pittulongu Beach and Lo Squalo. There are three thematic rooms named as the typical Sardinian plants: Lavanda Suite, Elicrisio, Lentischio, according to the different scents diffused in each room. 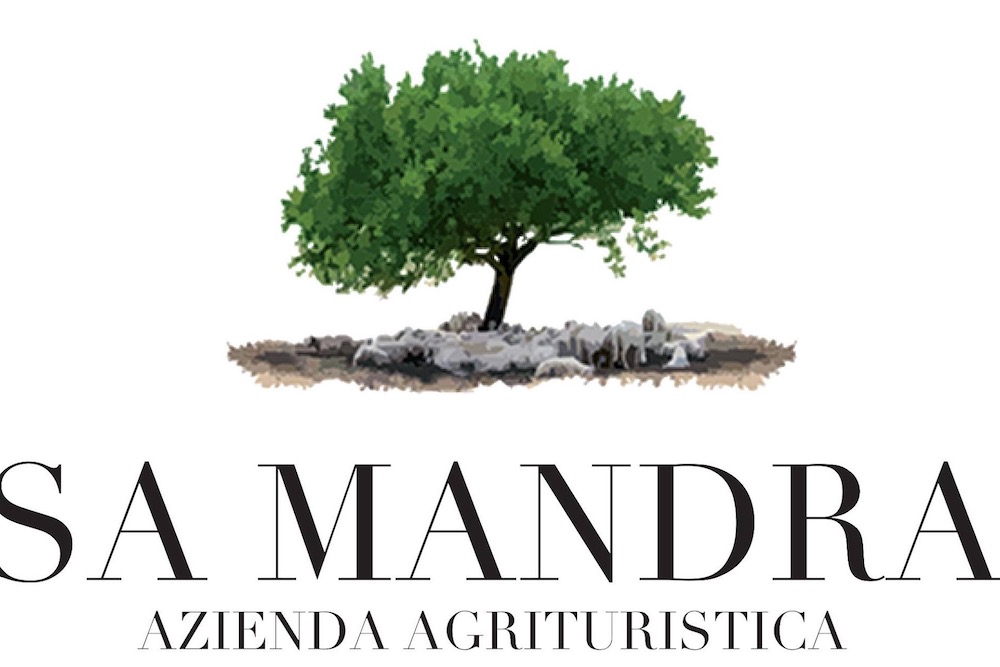 Azienda Sa Mandra is pleased to host you at its residences in Sa Mandra and Su Passu. Choose the one that's right for you ....

EAT AT A VOLONTA RISTORANTE SPAGHETTERIA 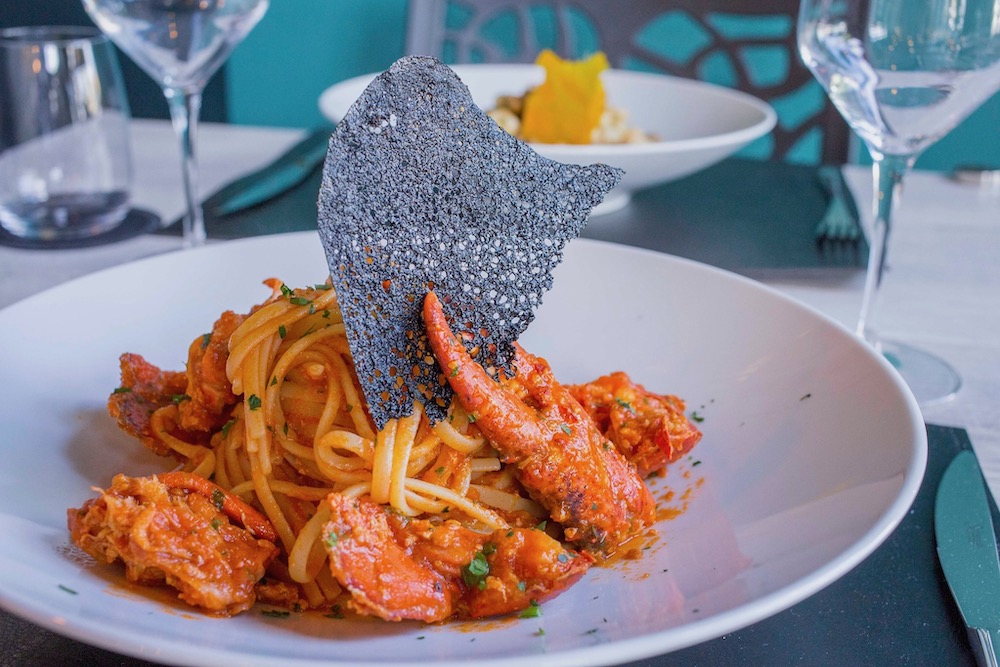 Rediscover the authentic pleasure of eating traditional sea and land dishes... at A Volontà. The restaurant is in the center of Tortolì.  You will find fresh fish directly from the fishing boat and other unforgettable dishes. 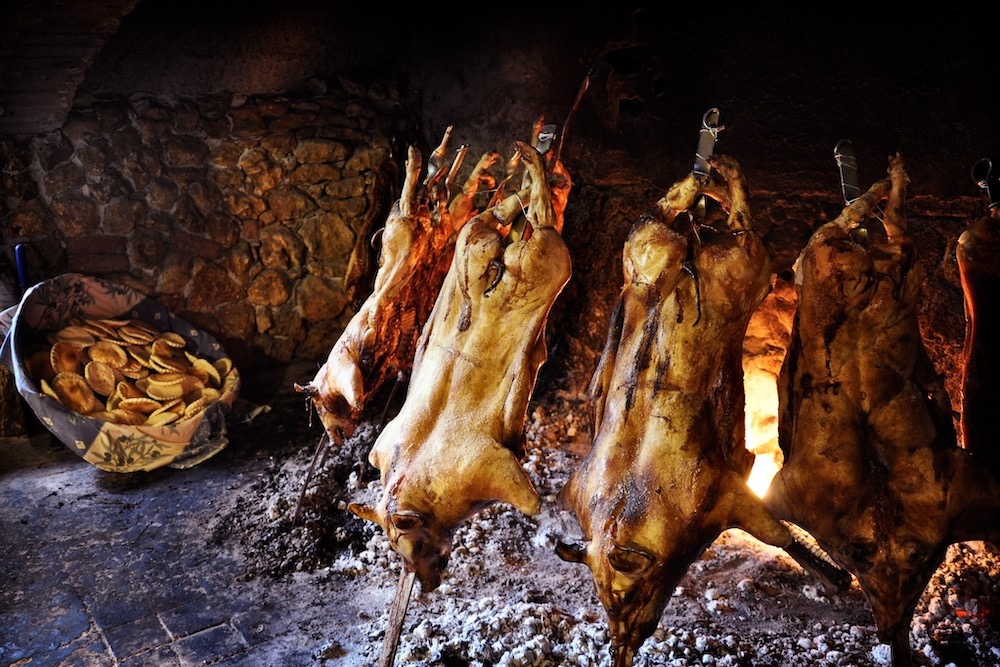 True Agriturismo in every sense, Sa Mandra is a model of farm-to-table eating and an “institution” on the island of Sardinia. This restaurant is a must to try - the Sardinian cuisine with all its flavor and variety in a set menu that enables them to offer main dishes of traditional cuisine. 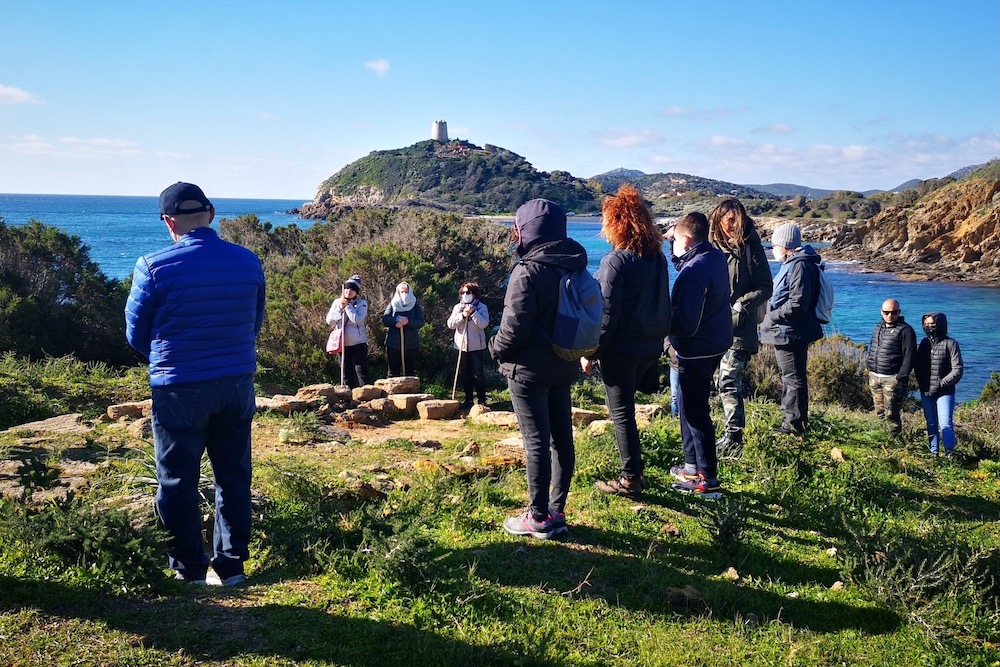 Sardinia as never seen before! Discover enchanting and mysterious Sardinia with Genna Tours.