Normandy is a must for your travelwishlist!

Normandy is a region of northern France. Its varied coastline includes white-chalk cliffs and WWII beachheads, including Omaha Beach, site of the famous D-Day landing. Just off the coast, the rocky island of Mont-Saint-Michel is topped by a soaring Gothic abbey. The city of Rouen, dominated by Cathédrale Notre-Dame de Rouen, is where military leader and Catholic saint Joan of Arc was executed in 1431. 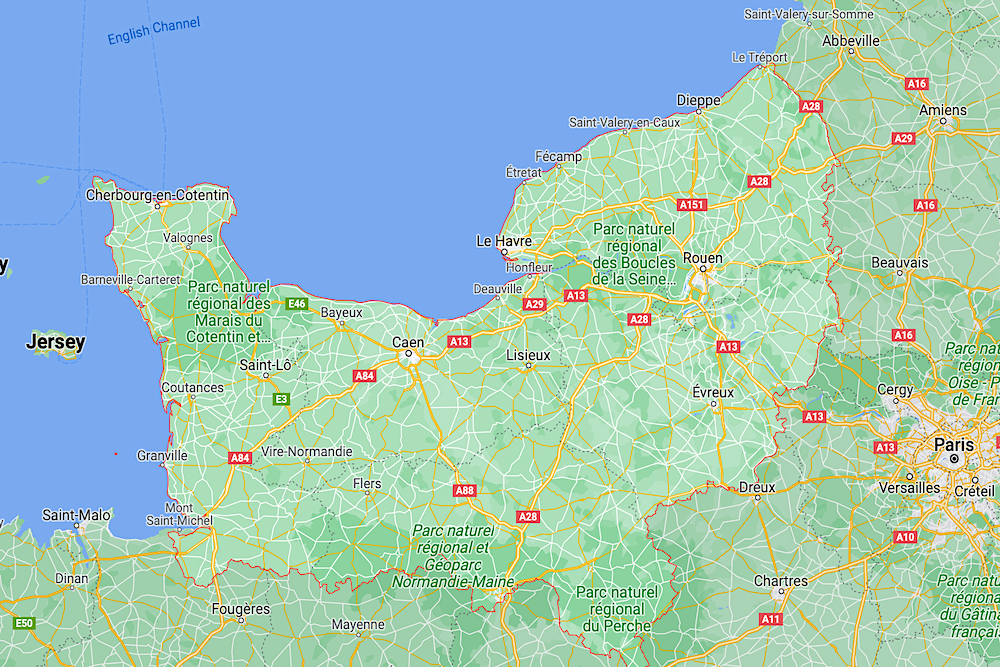 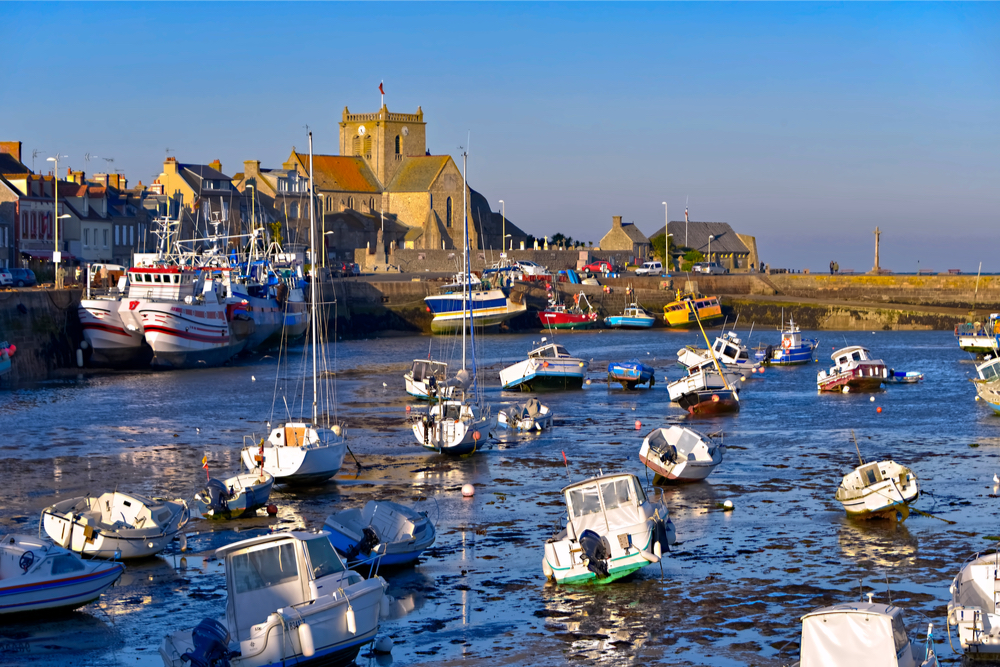 The picturesque fishing village of Barfleur lies on the northeast coast of Normandy’s Cotentin Peninsula. It has been named a Plus Beaux Village de France, one of France’s most beautiful villages and well worth a visit. 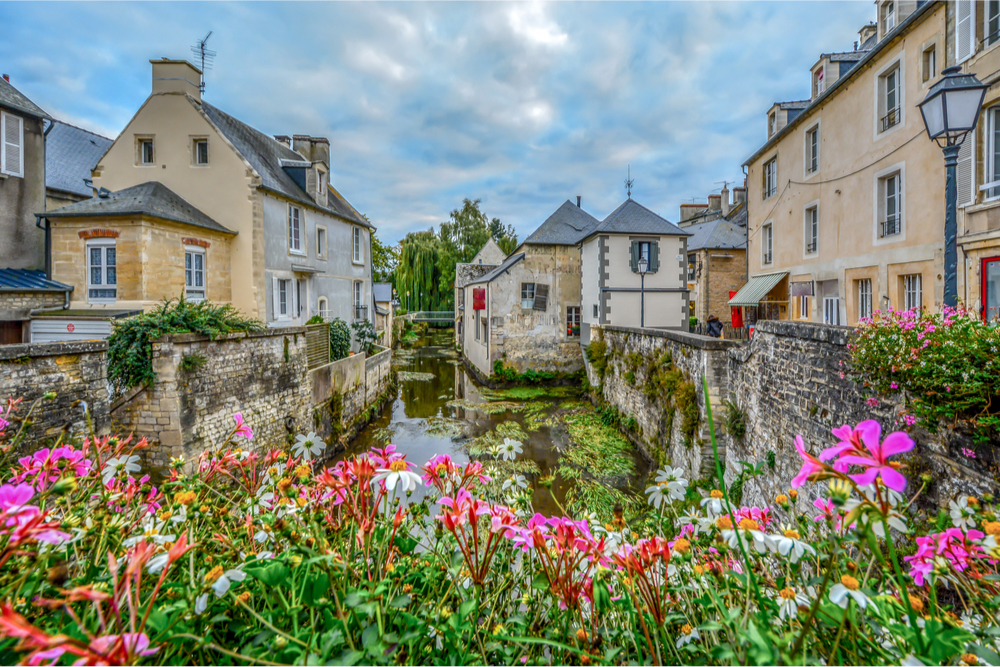 Bayeux is a town on the Aure river, 10 kilometers from the Channel coast. Its medieval centre contains cobbled streets, half-timbered houses and the towering, Norman-Gothic Cathédrale Notre-Dame. The famed 68-meter Tapisserie de Bayeux, an 11th-century tapestry depicting the 1066 Norman invasion of England, is on display in an 18th-century seminary. 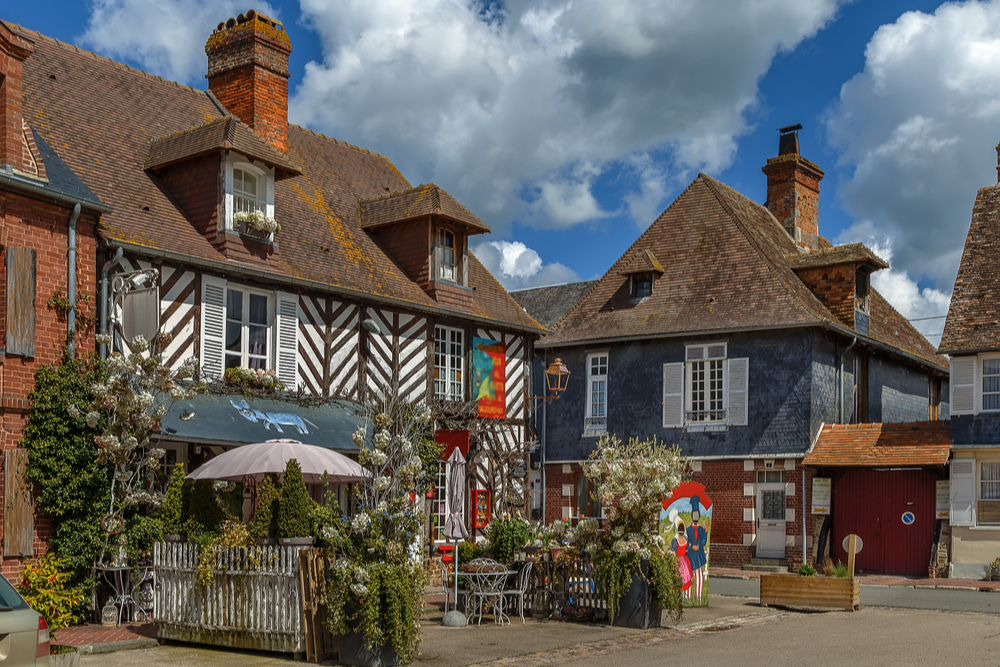 Beuvron is also affiliated to Les Plus Beaux Villages de France. It is an archetypal Norman village with lovingly restored half-timbered houses and numerous local producers and antiques dealers. 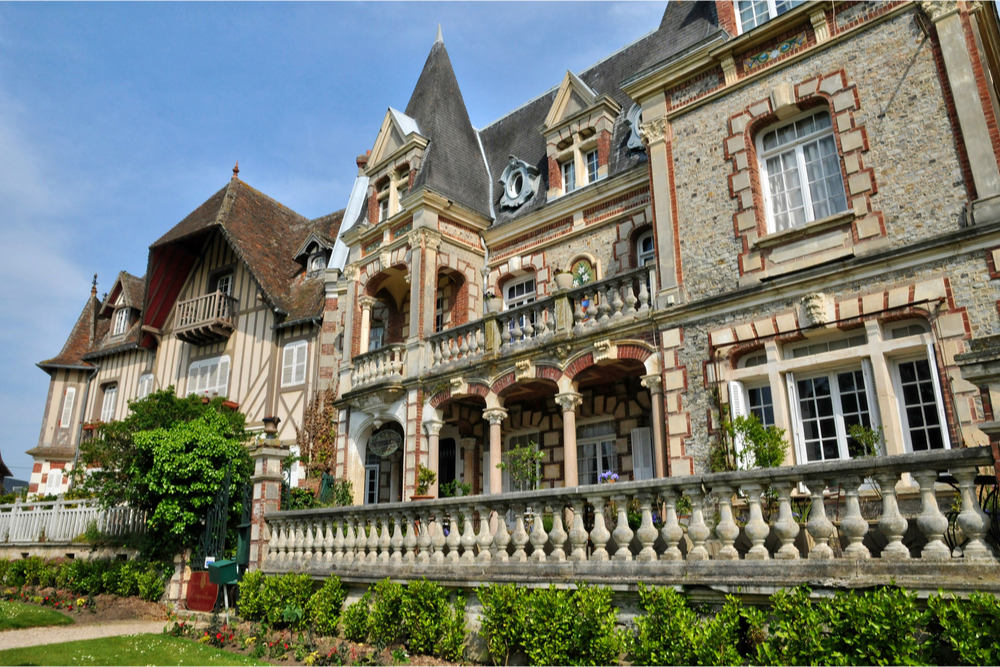 Cabourg is on the coast of the English Channel, at the mouth of the river Dives. The town sits on the Côte Fleurie (Flower Coast) and its population increases by over 40,000 during the summer. 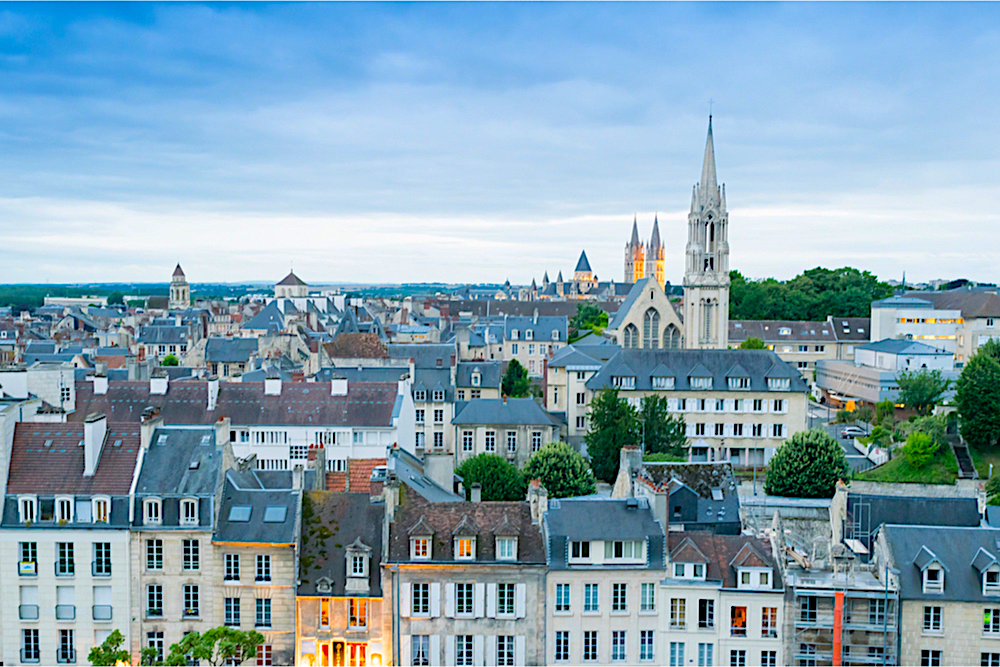 Caen is the capital of Calvados department in Normandy.  Its centre features the Château de Caen, a circa-1060 castle built by William the Conqueror. It stands on a hill flanked by the Romanesque abbeys of Saint-Étienne and Sainte-Trinité, which both date from the same period. The multimedia Mémorial museum is devoted to World War II, the 1944 Battle of Normandy and the Cold War. 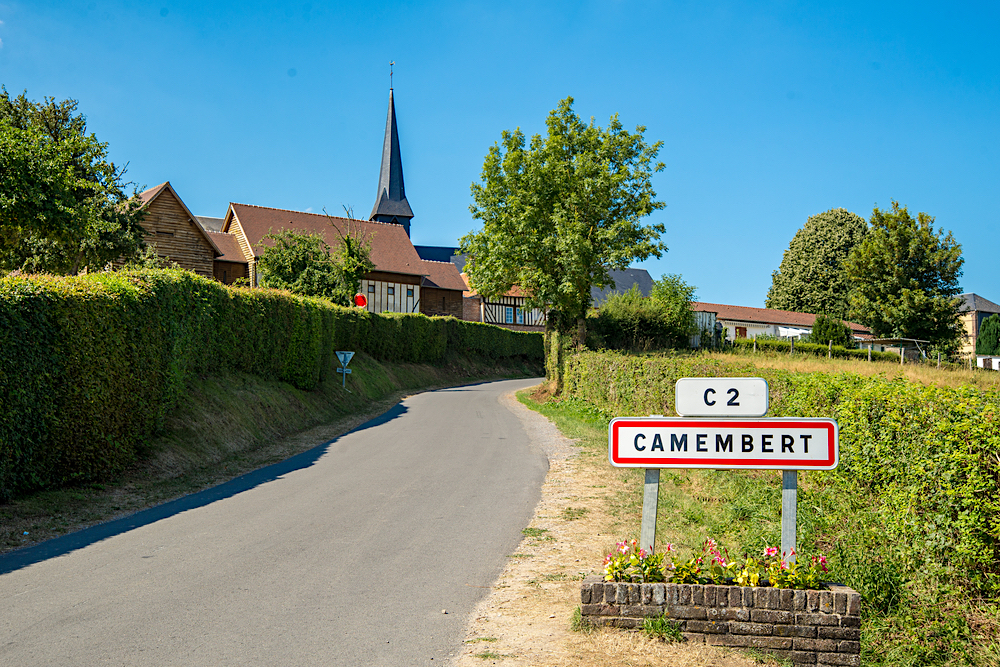 The commune is where the world famous cheese originated in 1791. It has been called "The largest small village in France." This is because the area of the commune itself is out of proportion to the centre of the village which consists of the Cheese Museum (in the shape of a Camembert cheese), the Town Hall (Mairie), the Church of St Anne, the Ferme Président (a museum), Beamoncel (the house where Marie Harel, the creator of camembert cheese lived) and 3 other small houses. The rest of the commune is scattered over 10 km2 (2,500 acres). 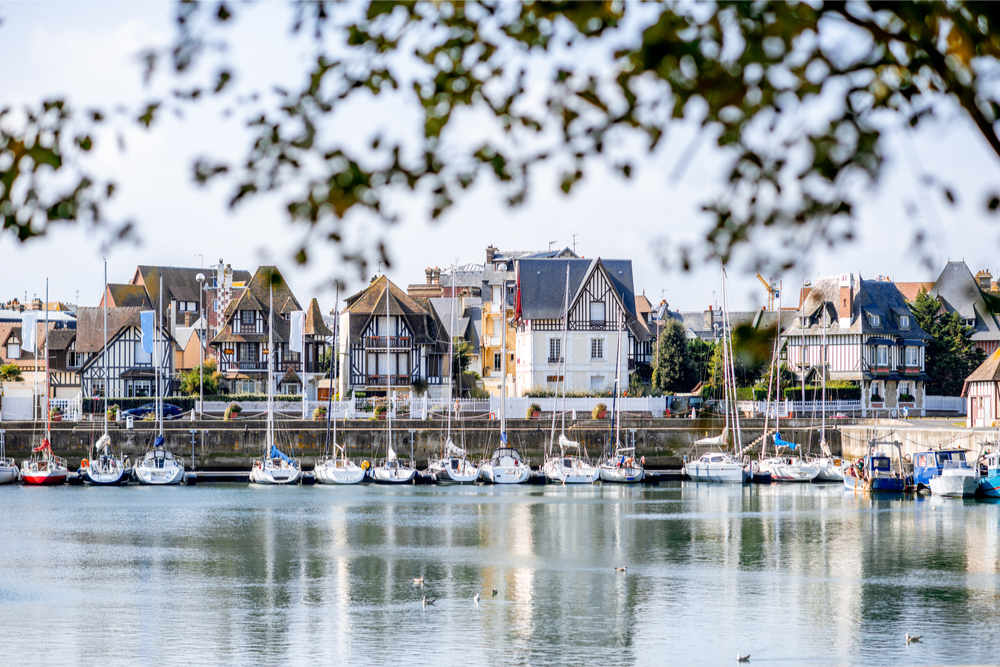 Deauville is a seaside resort on the Côte Fleurie.  An upscale holiday destination since the 1800s, it’s known for its grand casino, golf courses, horse races and American Film Festival. Its wide, sandy beach is backed by Les Planches, a 1920s boardwalk with bathing cabins. The town has chic boutiques, elegant belle epoque villas and half-timbered buildings. 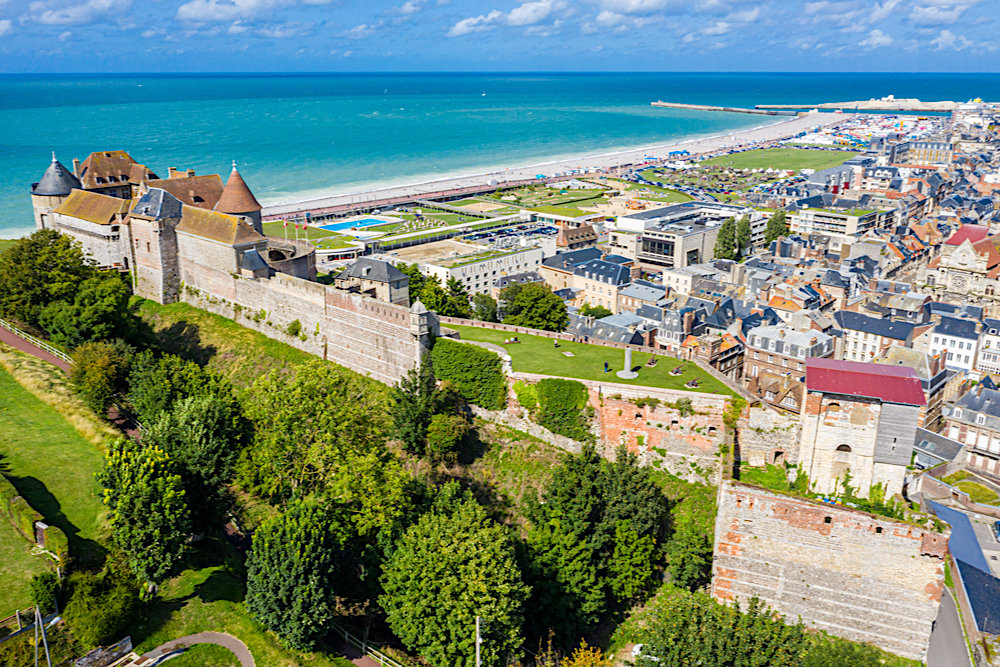 Dieppe is a fishing port on the coast of northern France. On a clifftop overlooking pebbly Dieppe Beach is the centuries-old Château de Dieppe. The castle’s museum includes maritime exhibits, ivory sculptures and impressionist paintings. Nearby, the Memorial of 19 August 1942 is a museum honouring the lives lost in the Dieppe Raid of WWII. The reconstructed medieval Saint-Jacques Church is in Gothic style. 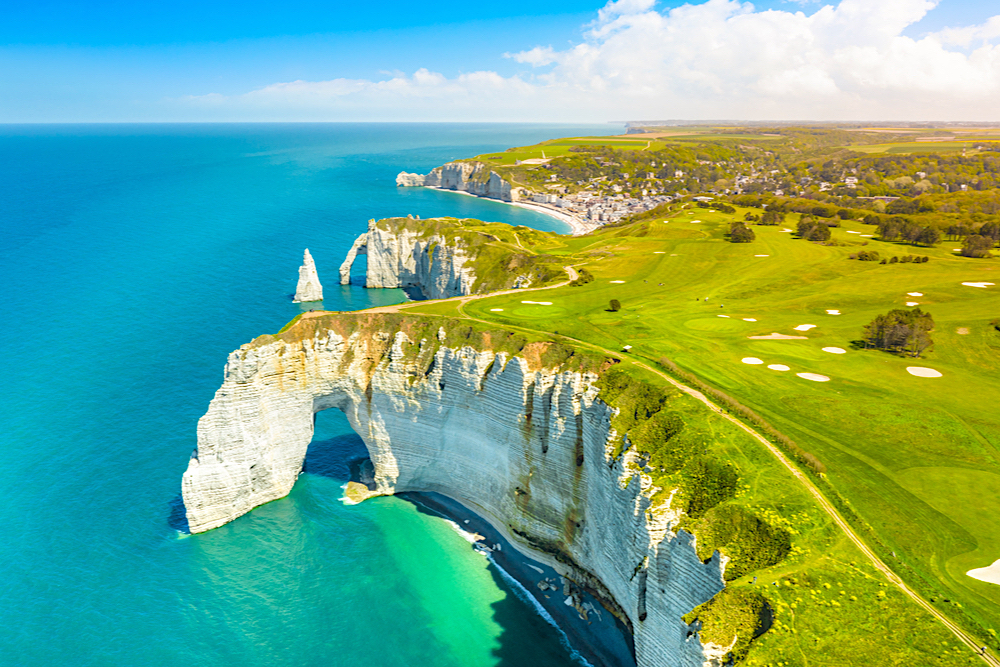 The town of Étretat is known for the striking rock formations carved out of its white cliffs, including the Porte d'Aval arch and L'Aiguille (the Needle), a pillar rising up from the sea. To the north, the cliffside Chapelle Notre-Dame de la Garde has dramatic views. 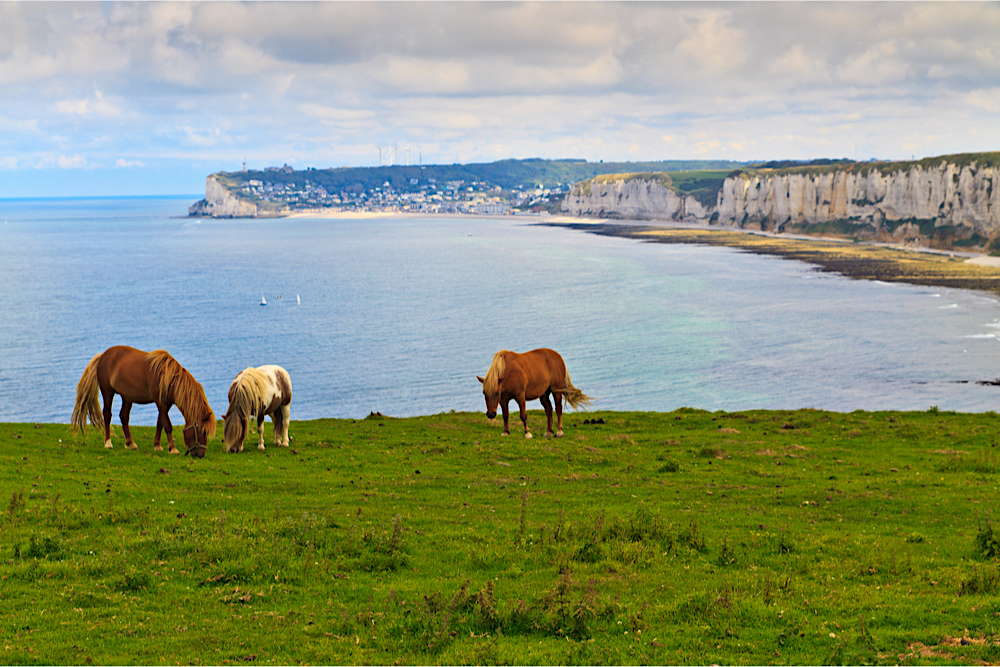 Fecamp is located in the valley of the river Valmont, in the heart of the Pays de Caux and was the first home of the Dukes of Normandy. It is a pretty seaside port on the Alabaster Coast that is known for the Benedictine liqueur made at the palace here. 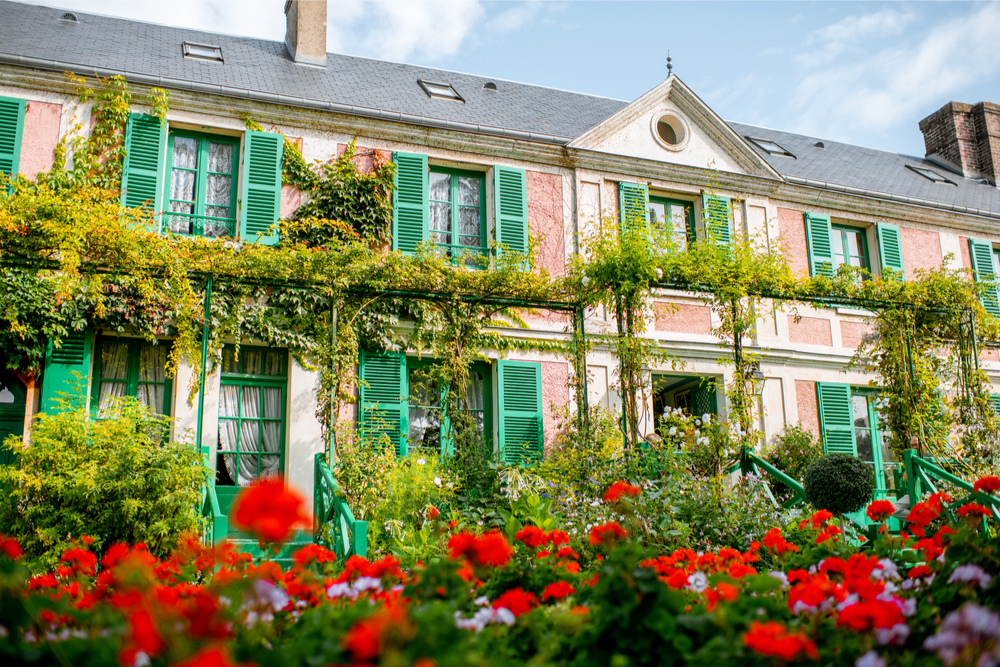 Impressionist painter Claude Monet lived and worked in the village from 1883 until his death in 1926. The artist’s former home and elaborate gardens, where he produced his famed water lily series, are now the Fondation Claude Monet museum. Nearby, the Musée des impressionnismes Giverny highlights the Impressionist art movement. 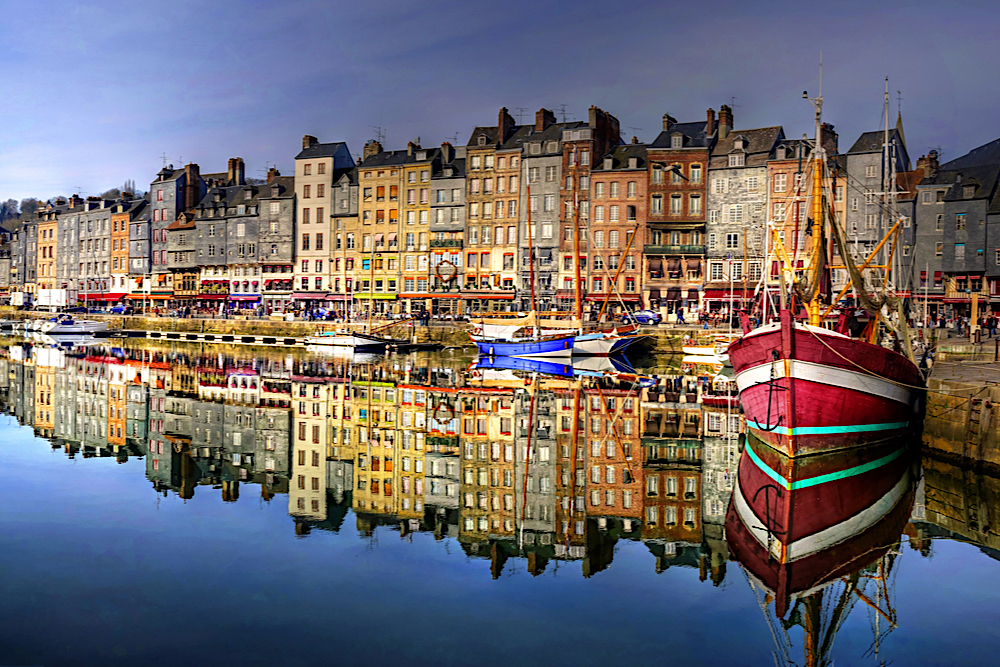 Honfleur is a gorgeous city on the estuary where the Seine river meets the English Channel. The Vieux-Bassin (old harbor), lined with 16th- to 18th-century townhouses, has been a subject for artists including Claude Monet and native son Eugène Boudin. Nearby is 15th-century St. Catherine's Church, a vaulted timber structure erected by shipbuilders. 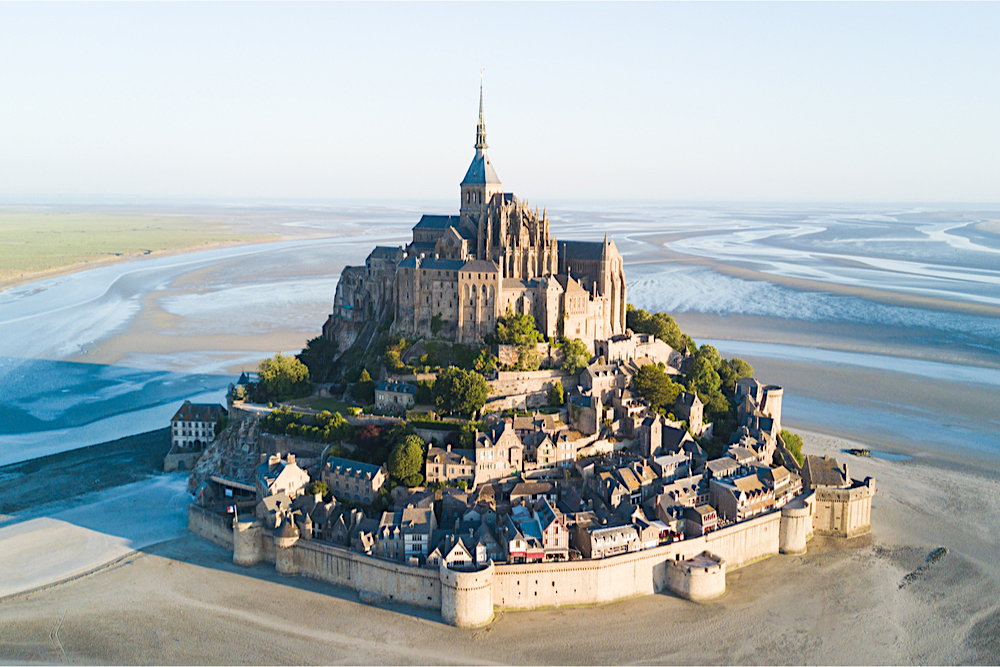 Le Mont-Saint-Michel  is a tidal island that lies approximately one kilometre (0.6 miles) off the country's north-western coast, at the mouth of the Couesnon River near Avranches and is 7 hectares (17 acres) in area. The mainland part of the commune is 393 hectares (971 acres) in area so that the total surface of the commune is 400 hectares (988 acres). As of 2017, the island had a population of 30. Mont Saint-Michel and its surrounding bay were inscribed on the UNESCO list of World Heritage Sites in 1979 for its unique aesthetic and importance as a medieval Christian site. 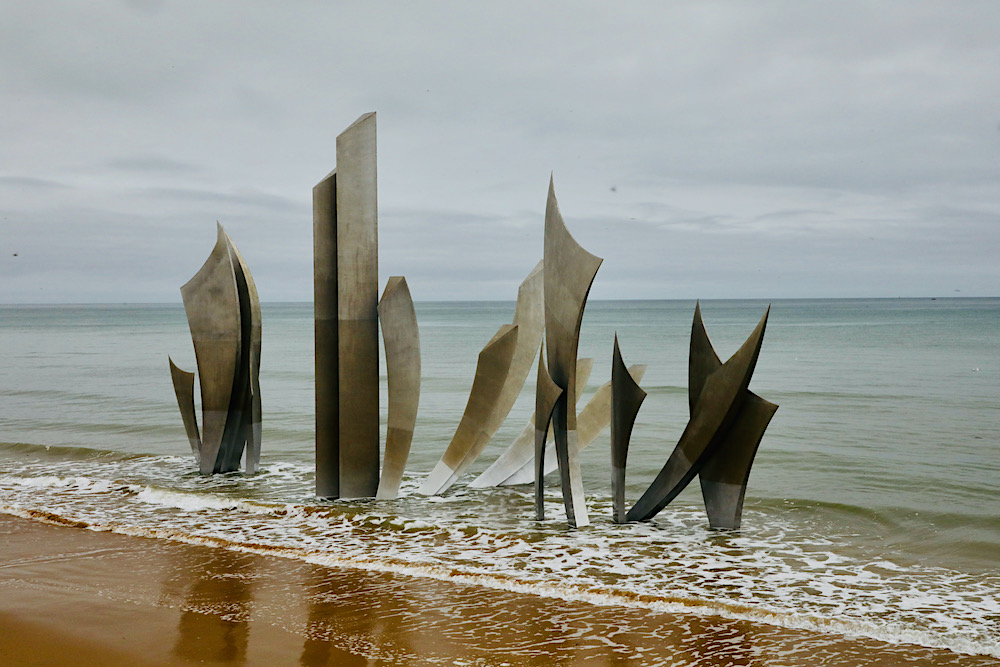 Omaha Beach is a landing area in Normandy, used by Allied forces in the WWII D-Day invasion. Today, the beach is dotted with the remains of German bunkers. On the shore, the stainless-steel sculpture Les Braves commemorates American soldiers. Behind the beach is the Musée Mémorial d'Omaha Beach, also documenting the invasion. Nearby, the Overlord Museum displays WWII tanks, artillery and dioramas. 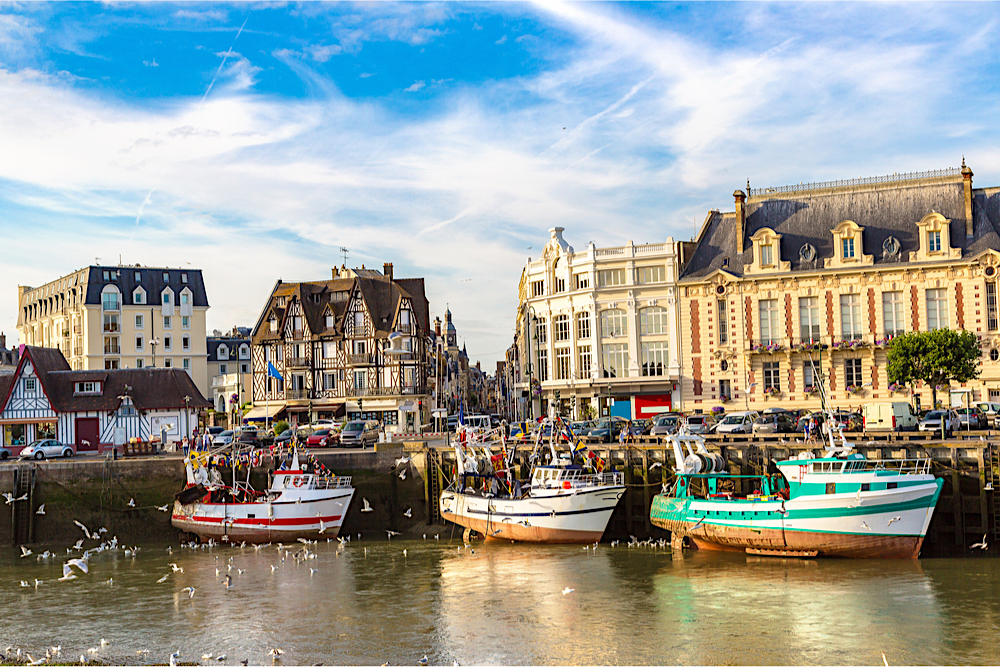 Trouville was one of the first-ever coastal resorts to be developed in France. Artists and writers have long fallen for Trouville-sur-Mer, Deauville’s older sibling. This seaside resort, originally a fishing port, combines glamorous buildings and villas, a vibrant fish market, splendid sandy beach with boardwalk and much more. 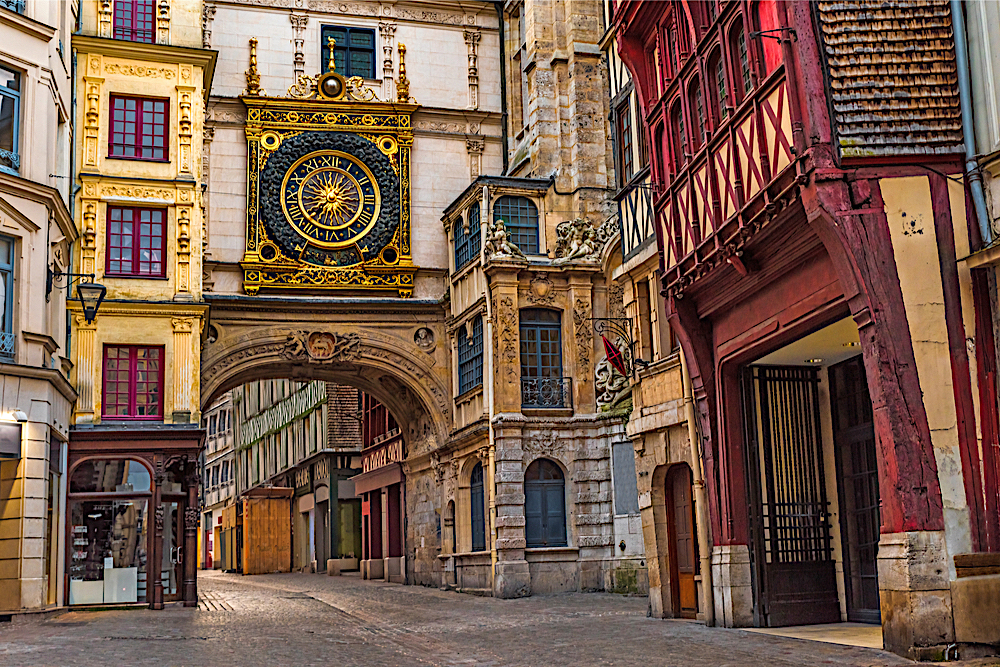 Rouen is the capital of Normandy on the river Seine. Important in the Roman era and Middle Ages, it has Gothic churches, such as Saint-Maclou and Saint-Ouen, and a cobblestoned pedestrian centre with medieval half-timbered houses. The skyline is dominated by the spires of Cathédrale Notre-Dame, much-painted by Impressionist Claude Monet. 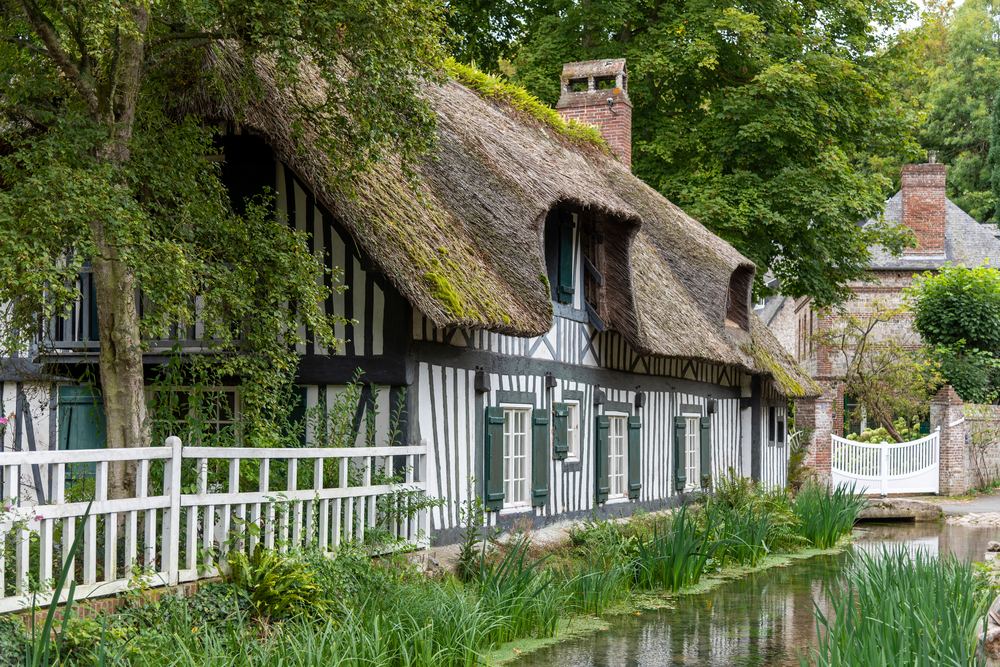 Veules-les-Roses is a tourism and farming village situated on the coast of the English Channel in the Pays de Caux, some 12 miles (19 km) southwest of Dieppe. The river Veules, which flows through the commune, is the shortest sea-bound river in France at 1.194 kilometres (0.742 mi). Its water is used to create ponds for growing watercress whence it finds its way to the sea through a gap in the high chalk cliffs, which overlook a sand and pebble beach.

WHEN TO GO: The best time to visit Normandy is June to August. Though this is the height of the peak tourist season – which can last from May to mid-October – this period also promises the most pleasant weather.

HOW TO GET AROUND: Rent a car to truly experience the many delights of Normany. 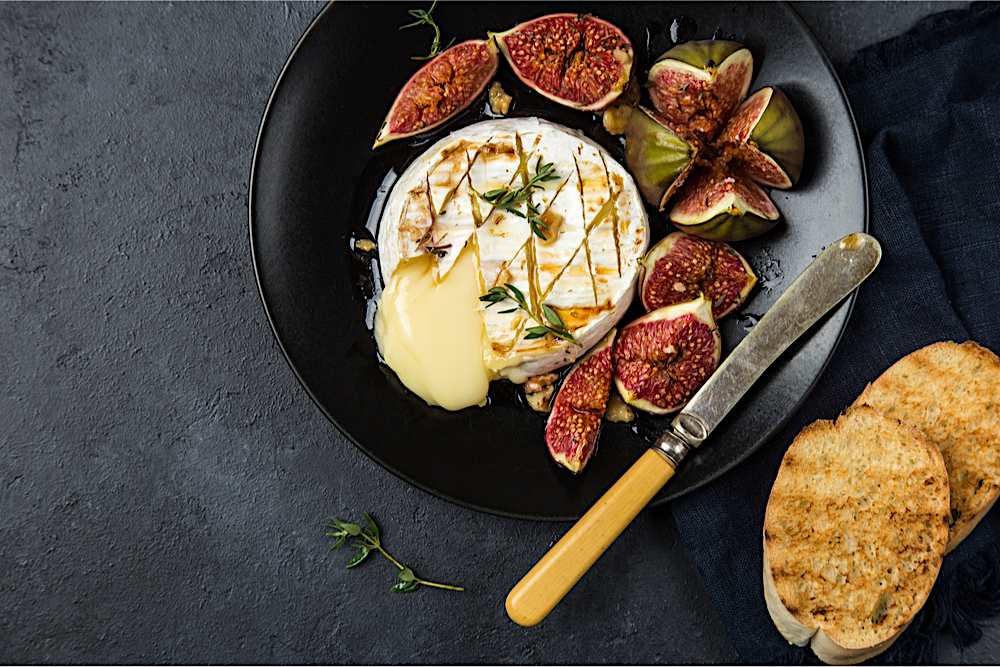 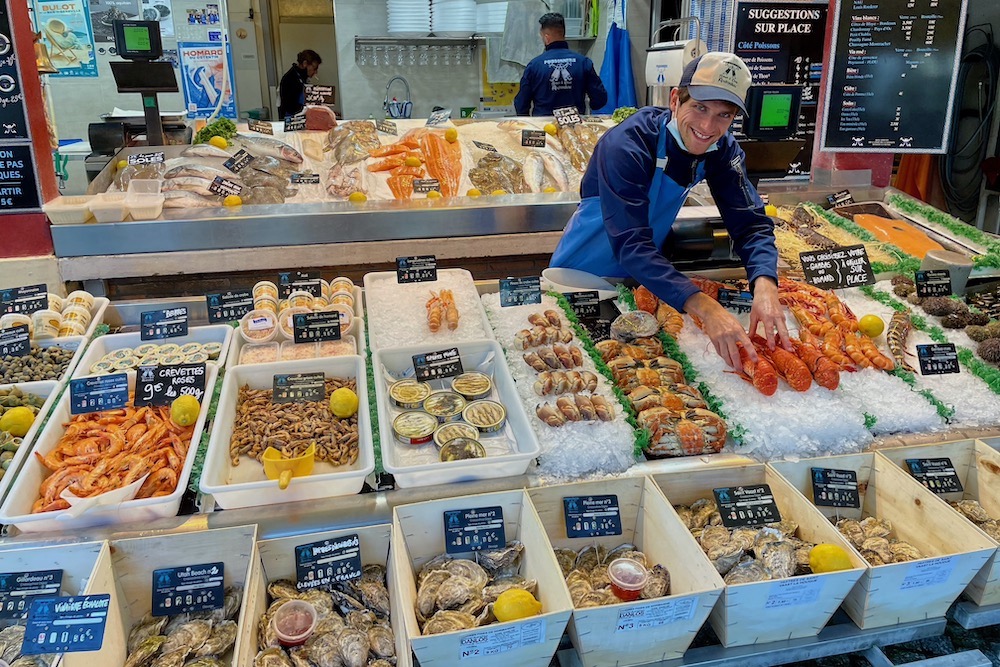 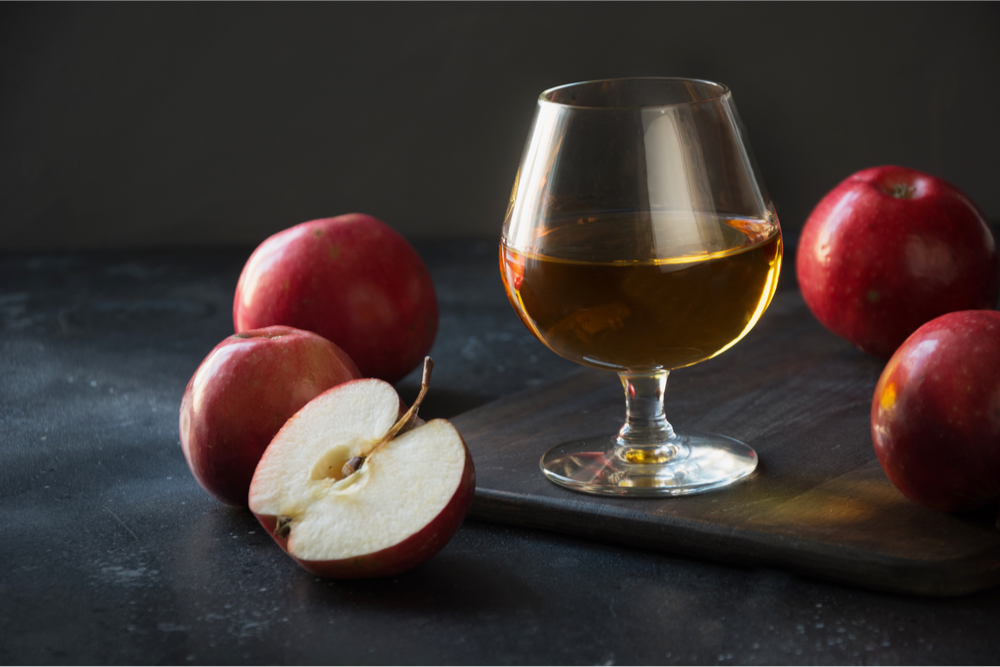 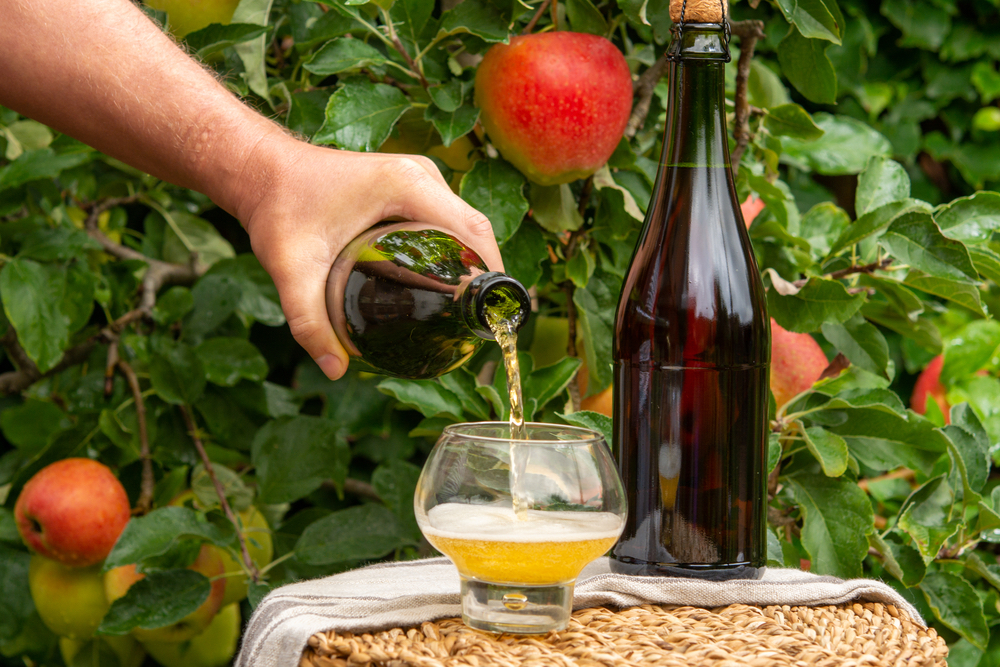 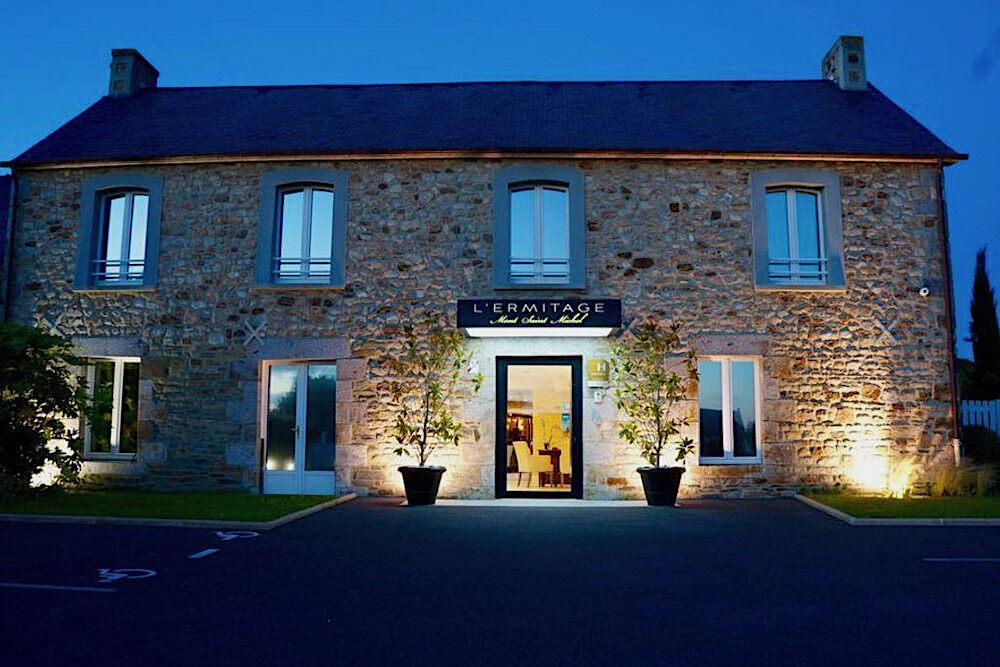 L'Ermitage is located in the Bay of Mont Saint Michel, four kilometers from the UNESCO World Heritage 'Wonder of the West'. The former coaching inn of the 19th century was renovated and expanded in 2011. L'Ermitage, with its six spacious suites with discreet elegance, private terraces and balconies, completely and perfectly soundproofed, is the quintessence of luxury hotels in the region. In a felted and luxurious setting, the Ermitage Mont Saint Michel is a calm, friendly and relaxing place. 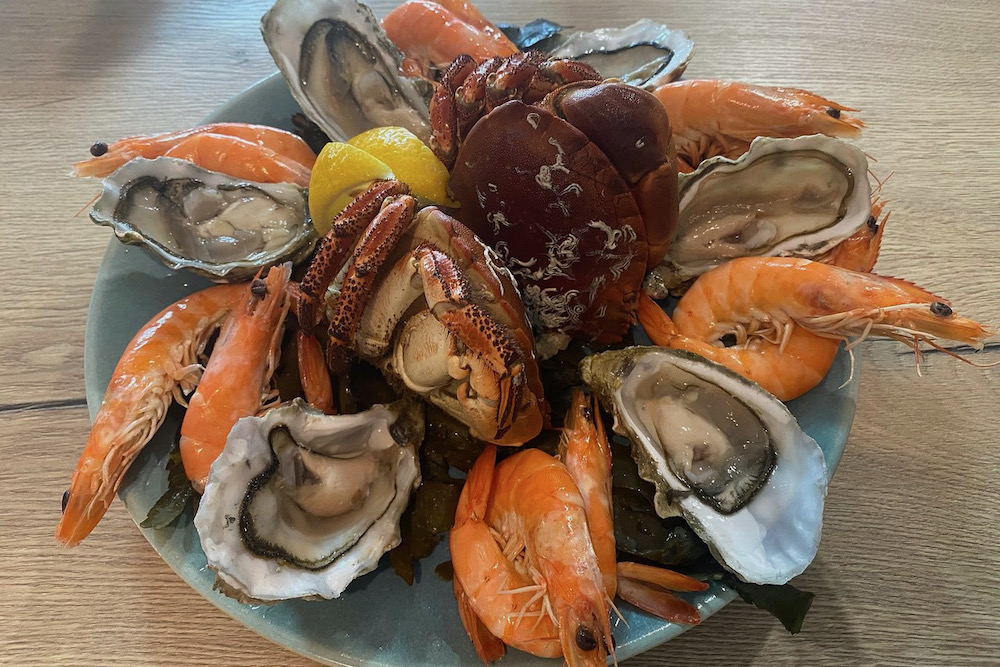 Seafood bistro on the beach. Located on the boards of Trouville, the restaurant welcomes you every day with its seafood specialties, fish cooked a la plancha, grilled meats and market cuisine. Continuous service from April to October. 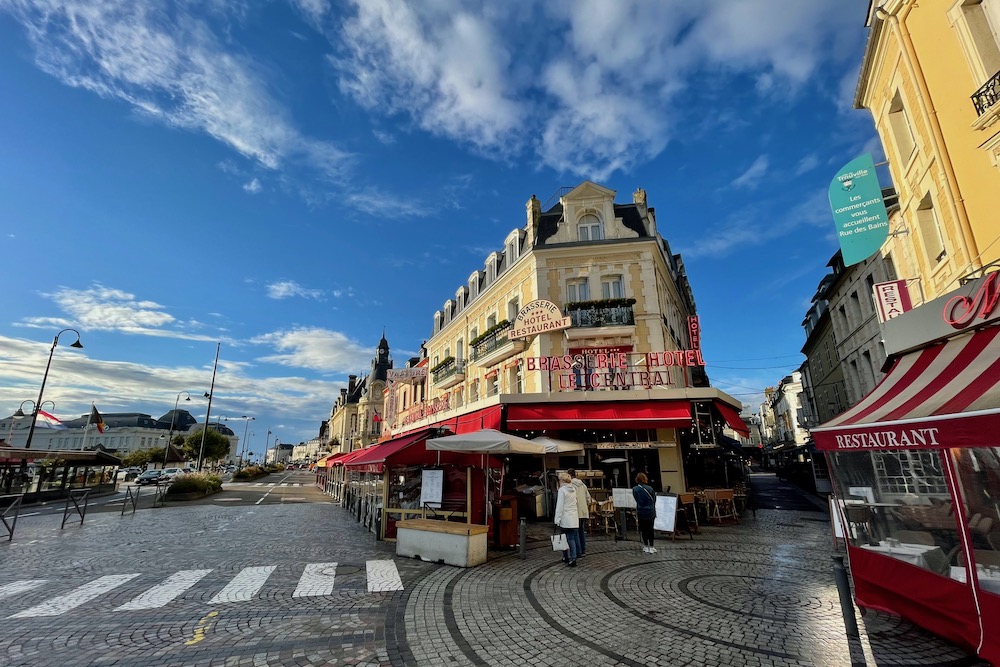 Welcome to Le Central, the lively brasserie which has become a Trouville institution, an essential meeting place where regulars, one of whom was the writer Marguerite Duras, and travellers passing through, are sure to be welcomed with a smile and treated to delicious homemade fare. 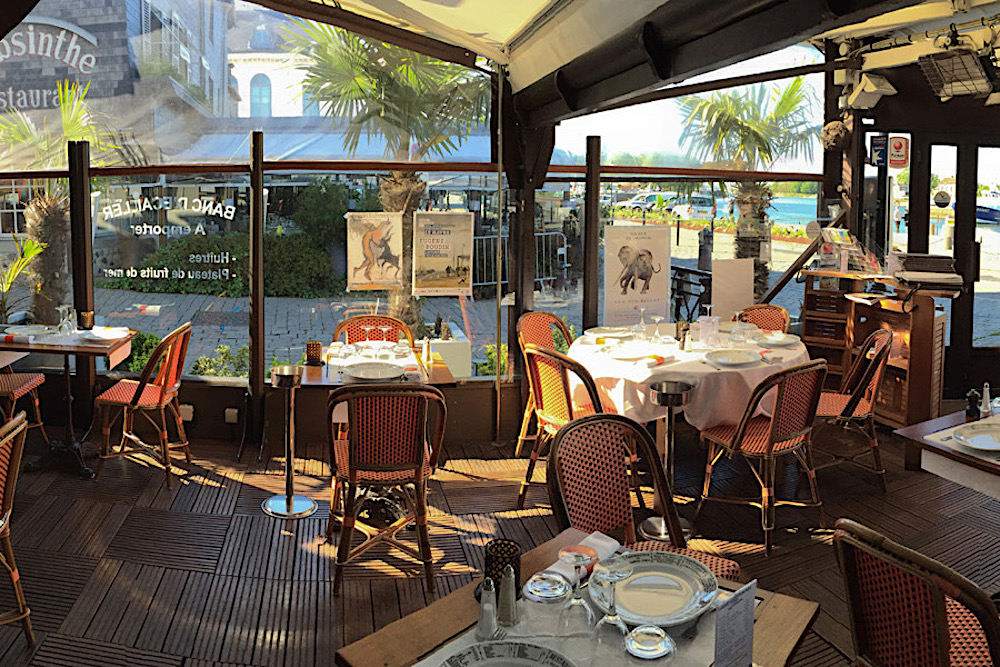 Experience a warm atmosphere and a beautiful and large terrace with an oyster and shellfish bar. Overlooking the fishing port in the heart of the old town of Honfleur. Savour delicious seafood cuisine and local cooking of Normandy. 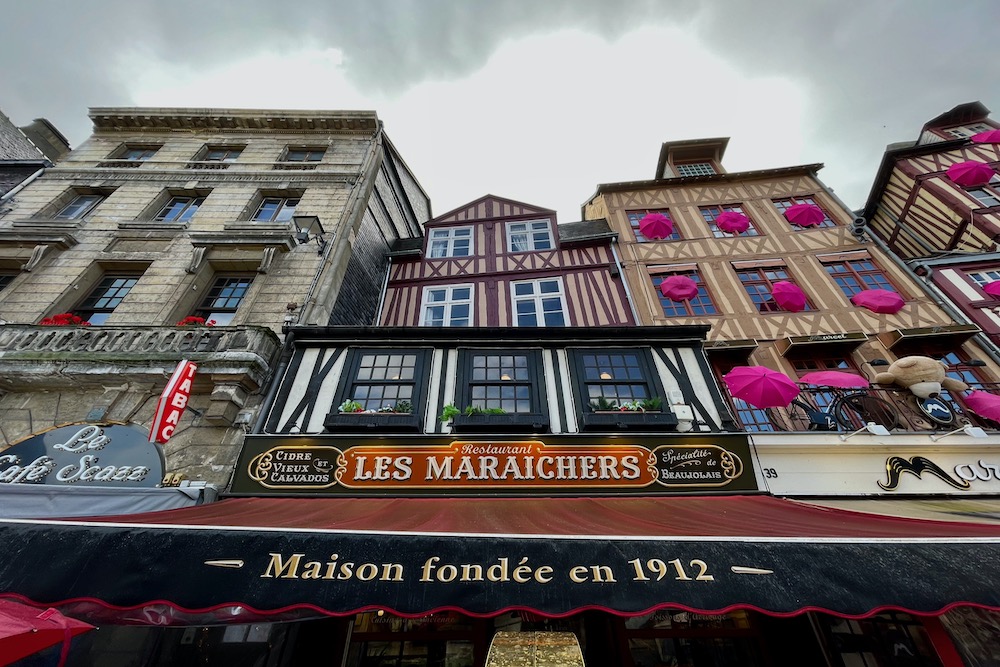 Les Maraîchers is one of the oldest bistros on the Place du Vieux Marché in the historic heart of Old Rouen. The Bistro welcomes you in a setting full of warmth with its enamel signs, mirrors, old posters, family photos, oak floor and zinc decorated with pitchers. You will taste genuine Bistro cuisine : homemade duck foie gras, frying pans of garlic snails, calf's head ravigote, oysters from Saint-Vaast, bar in virgin oil , and a large choice of owner's wines. 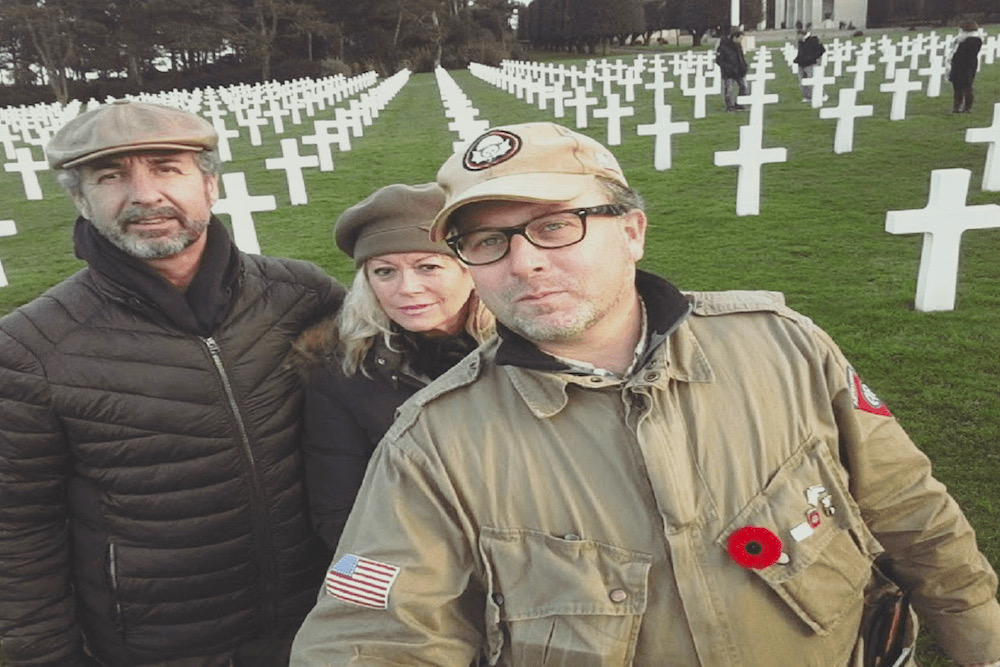