Experience 7 more towns in gorgeous Tuscany in our second blog

Tuscany is world famous for its beautiful landscapes, rich history and artistic legacy, and its influence on high culture. It is regarded as the birthplace of the Italian Renaissance and has been home to many figures influential in the history of art and science. It contains well-known museums such as the Uffizi and the Palazzo Pitti and is also famous for its wines, including Chianti, Vino Nobile di Montepulciano, Morellino di Scansano, Brunello di Montalcino and white Vernaccia di San Gimignano. 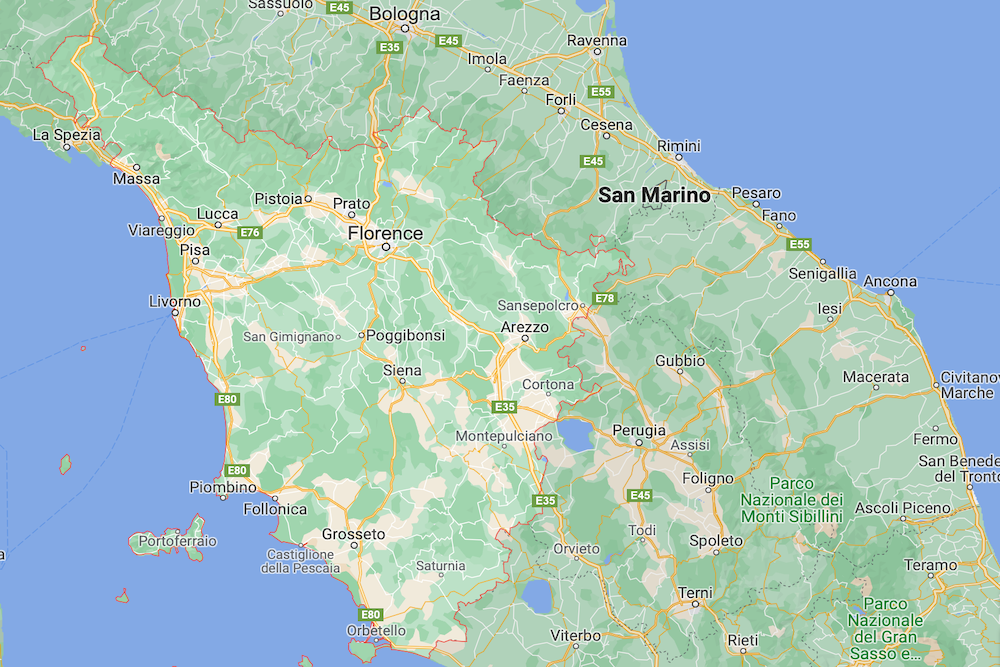 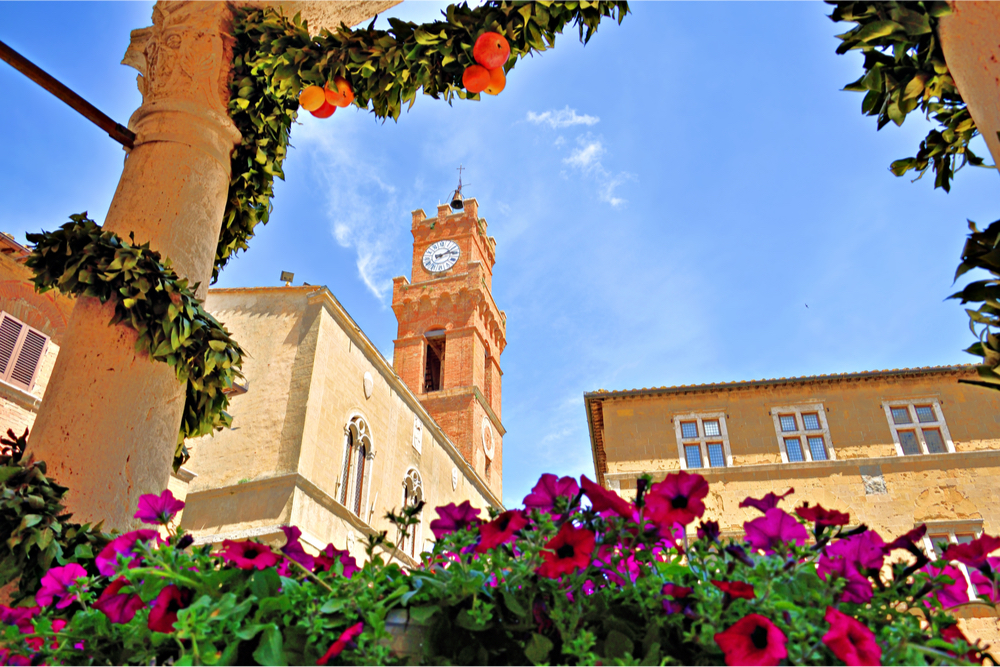 Pienza is a town and comune in the province of Siena, Tuscany, in the historical region of Val d’Orcia, situated between the towns of Montepulciano and Montalcino. In 1996, UNESCO declared the town a World Heritage Site, and in 2004 the entire valley, theVal d'Orcia, was included on the list of UNESCO's World Cultural Landscapes. The central Piazza Pio II is framed by 15th-century buildings like the Pienza Cathedral and Piccolomini Palace. The latter was Pope Pius II’s summer residence and features a roof garden with valley views. Pienza is famous for its local pecorino sheep's milk cheese and you can taste and buy it at many little stores in the town. 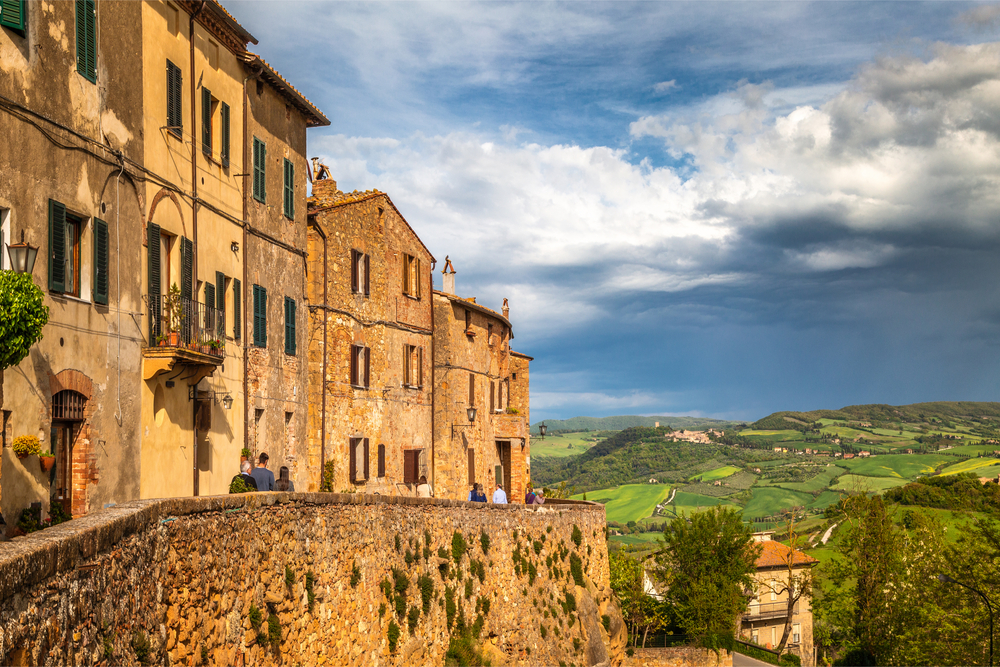 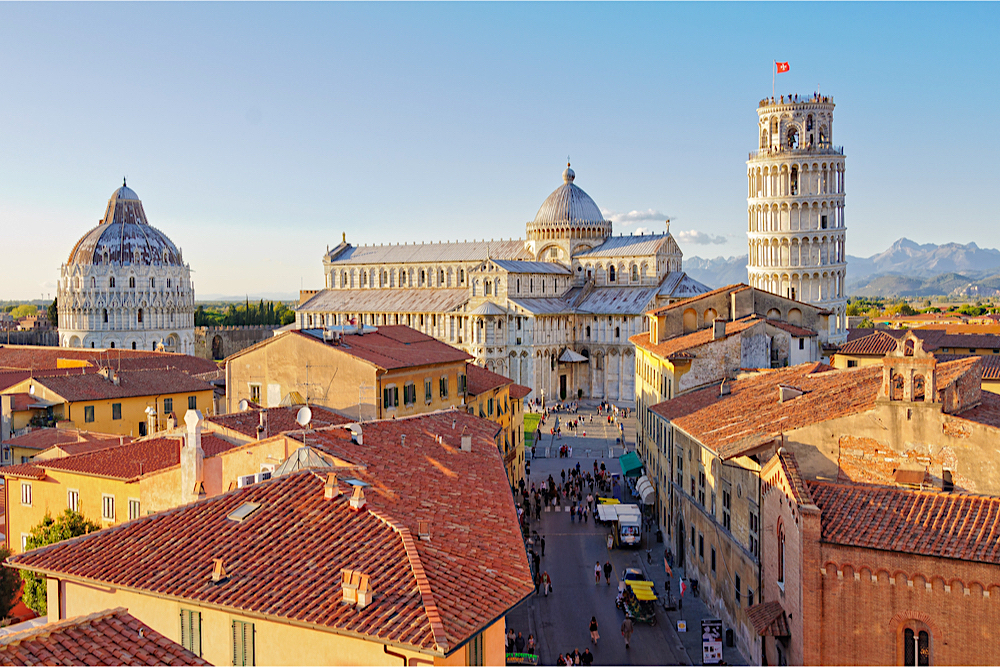 Pisa is a quiet provincial university town that is world famous for its art and architectural treasures. The city also retains much of its 6.5-mile (10.5-kilometre) circuit of walls. Pisa is distinguished above all by a remarkable group of buildings in the Piazza del Duomo, the so-called Square of Miracles, located at the northwestern end of the medieval walled city. This piazza contains the cathedral, or Duomo; the baptistery; the campanile, or Leaning Tower of Pisa; and the camposanto, or cemetery. The iconic 56m white-marble Leaning Tower was already tilting when it was completed in 1372 and is the bell tower of the Romanesque, striped-marble cathedral that rises next to it in the Piazza dei Miracoli. 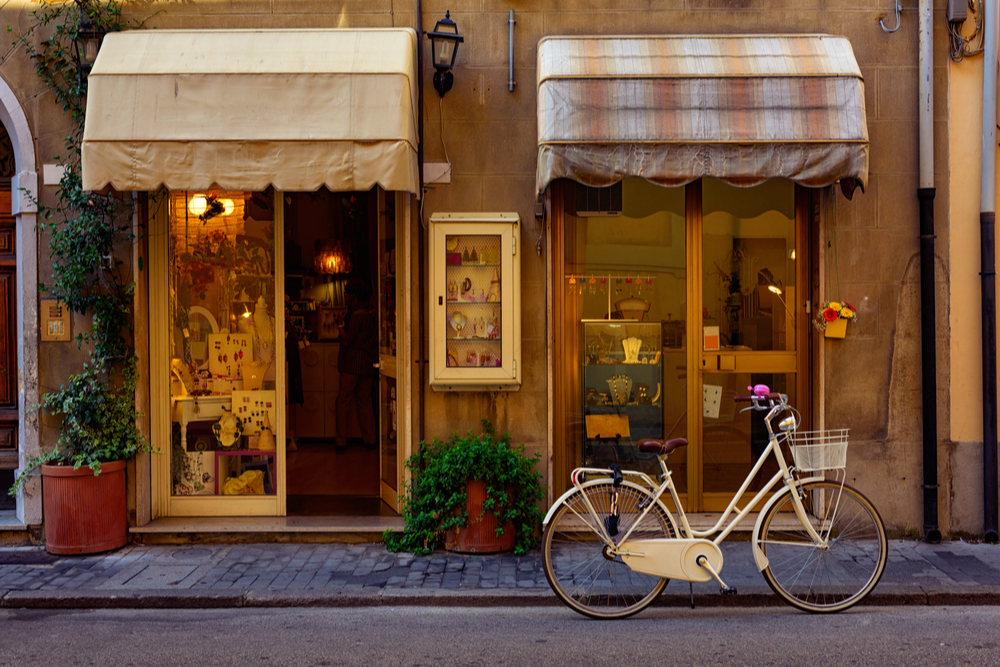 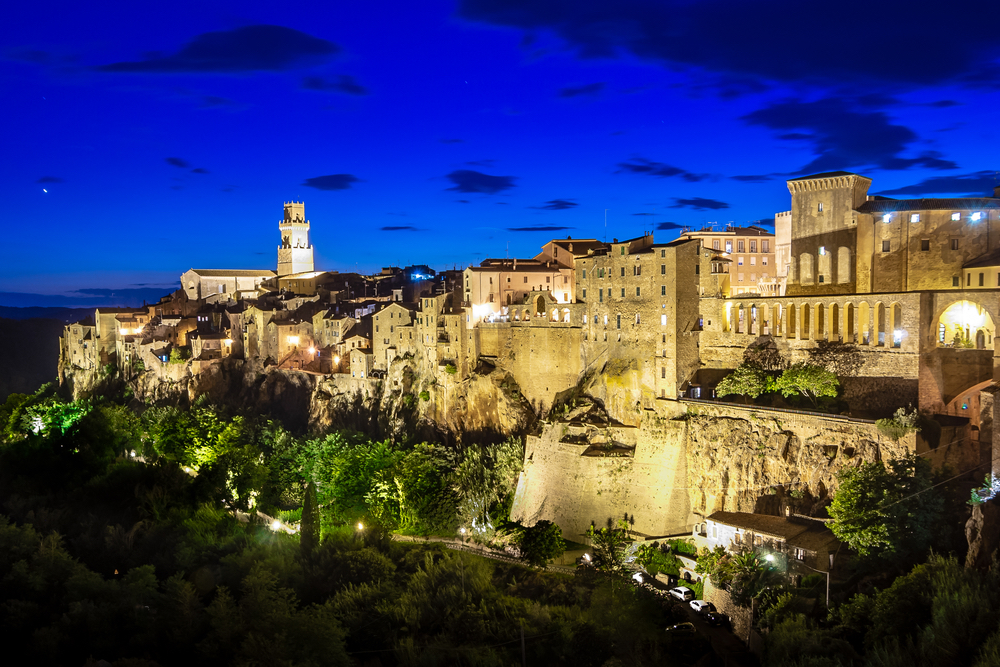 The town of Pitigliano is located in the province of Grosseto about 80 kilometres (50 mi) south-east of the city of Grosseto. The quaint old town is known as the little Jerusalem,for the historical presence of a Jewish community that has always been well integrated into the social context and that has its own synagogue. 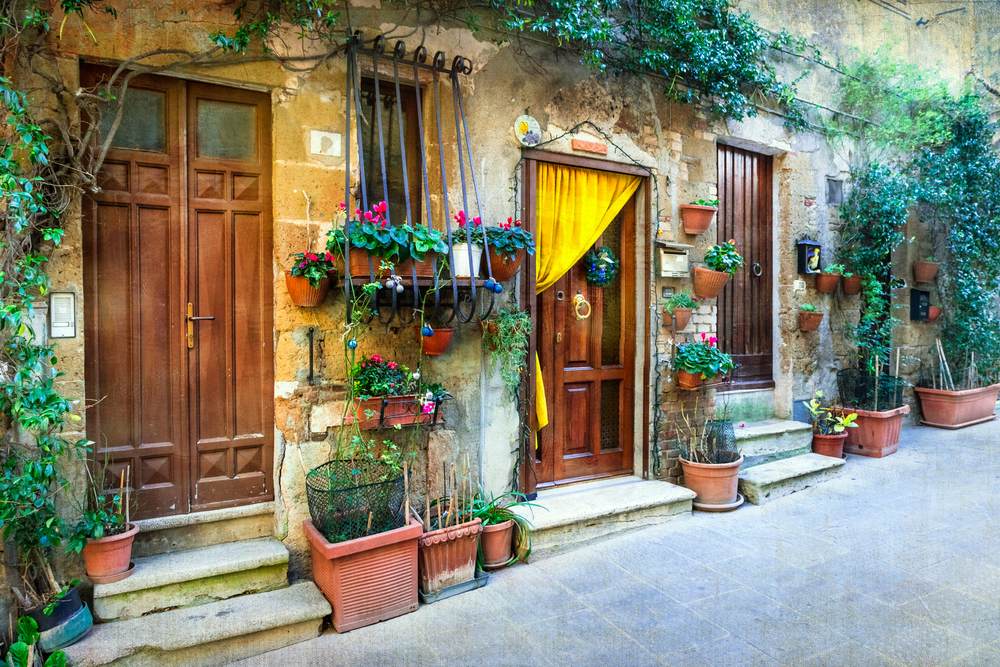 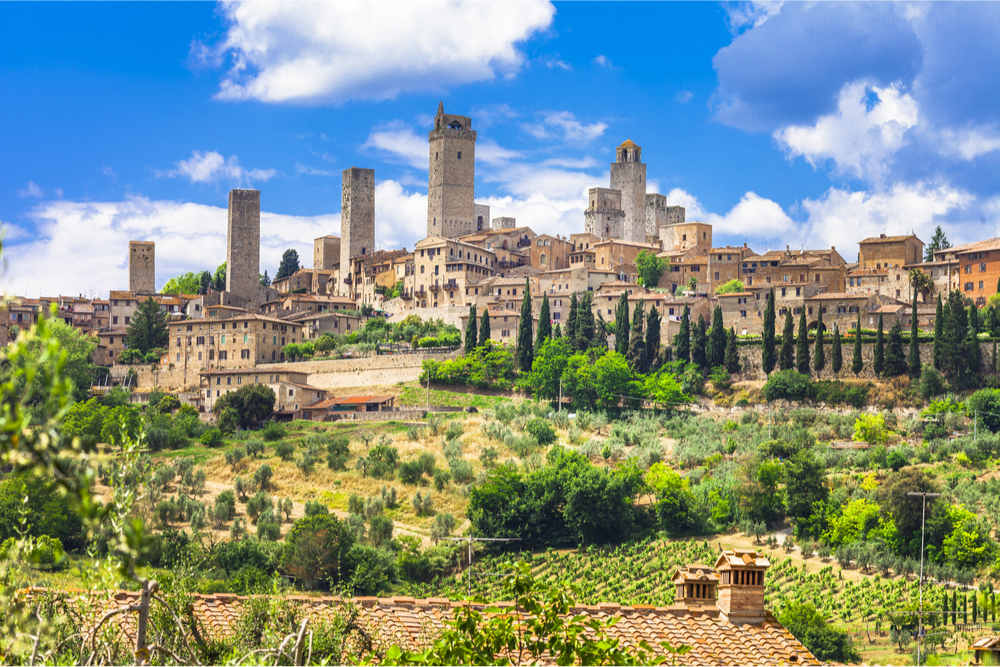 San Gimignano is a small walled medieval hill town in the province of Siena.  Known as the Town of Fine Towers, San Gimignano is famous for its medieval architecture, unique in the preservation of about a dozen of its tower houses, which, with its hilltop setting and encircling walls, form a impressive skyline. The historic Centre of San Gimignano is a UNESCO World Heritage Site. The town also is known for saffron, the Golden Ham, and its white wine, Vernaccia di San Gimignano, produced from the ancient variety of Vernaccia grape which is grown on the sandstone hillsides of the area. 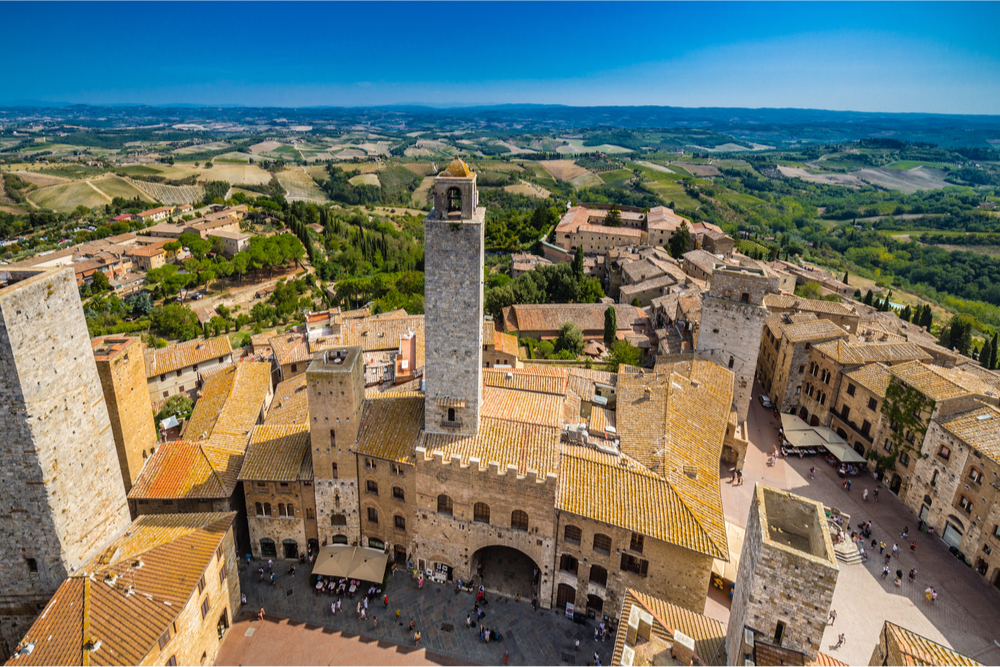 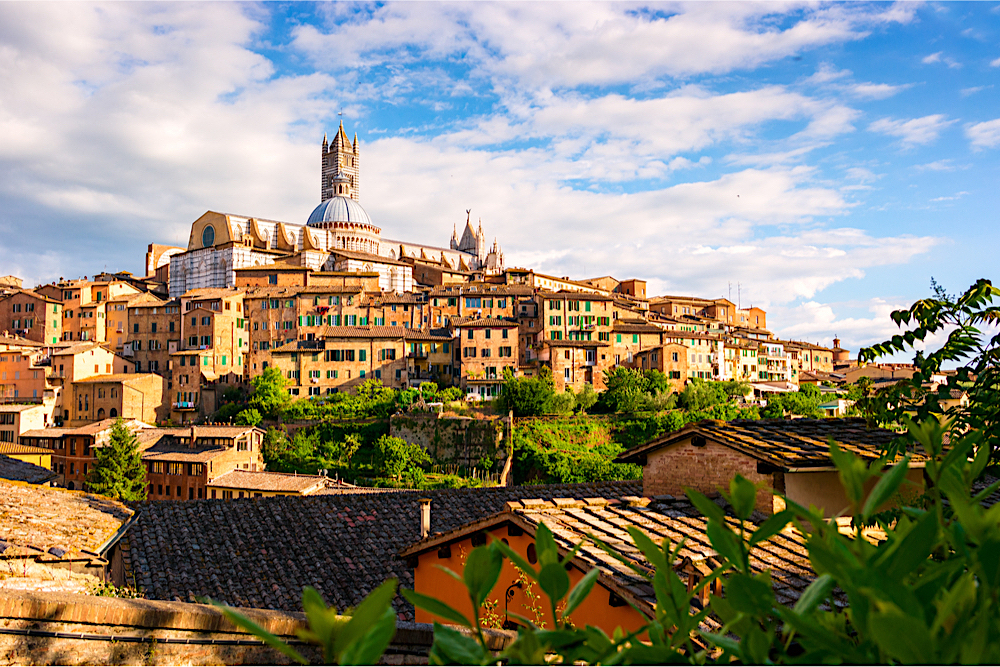 Siena is located in the central part of Tuscany, in the middle of a vast hilly landscape between the Arbia river valley (south), the Merse valley (south-west), the Elsa valley (north), the Chianti hills (north-east), the Montagnola Senese (west) and the Crete Senesi (south-east). Siena was one of the most important cities in medieval Europe, and its historic center is a UNESCO World Heritage Site. Siena is famous for its cuisine, art, museums, medieval cityscape and the Palio, a horse race held twice a year in Piazza del Campo. Siena is also home to the oldest bank in the world, the Monte dei Paschi bank, which has been operating continuously since 1472. The fan-shaped central square, Piazza del Campo, is the site of the Palazzo Pubblico, the Gothic town hall, and Torre del Mangia, a slender 14th-century tower with sweeping views from its distinctive white crown. The city’s 17 historic “contrade” (districts) extend outward from the piazza. 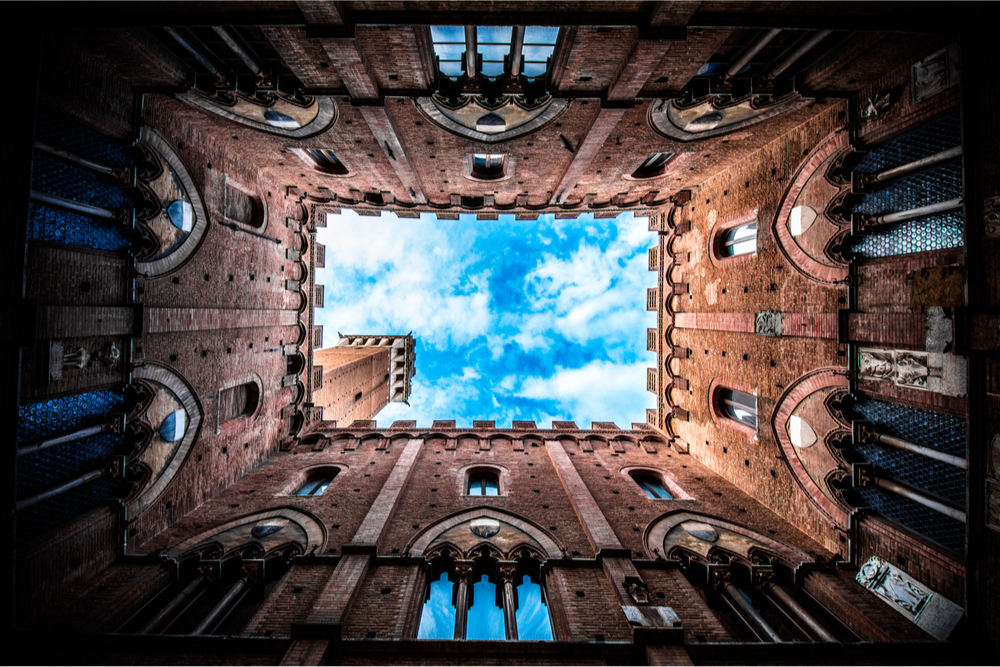 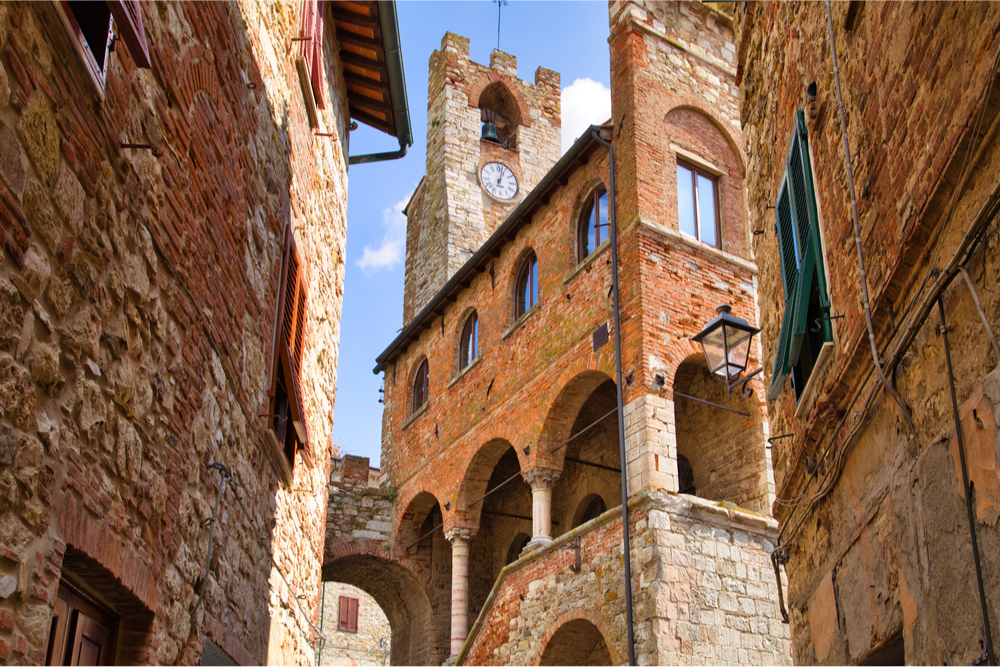 Suvereto, located amongst olive groves and vineyards, is  one of the most beautiful villages in Tuscany.  The quiet and peaceful town has numerous old buildings and narrow streets.It was granted full DOCG status in November 2011, the fifth of Tuscany. As of the 2012 vintage, Suvereto and its vineyards are no longer a sub-zone of theVal di Cornia, but an official viticultural area in their own right. 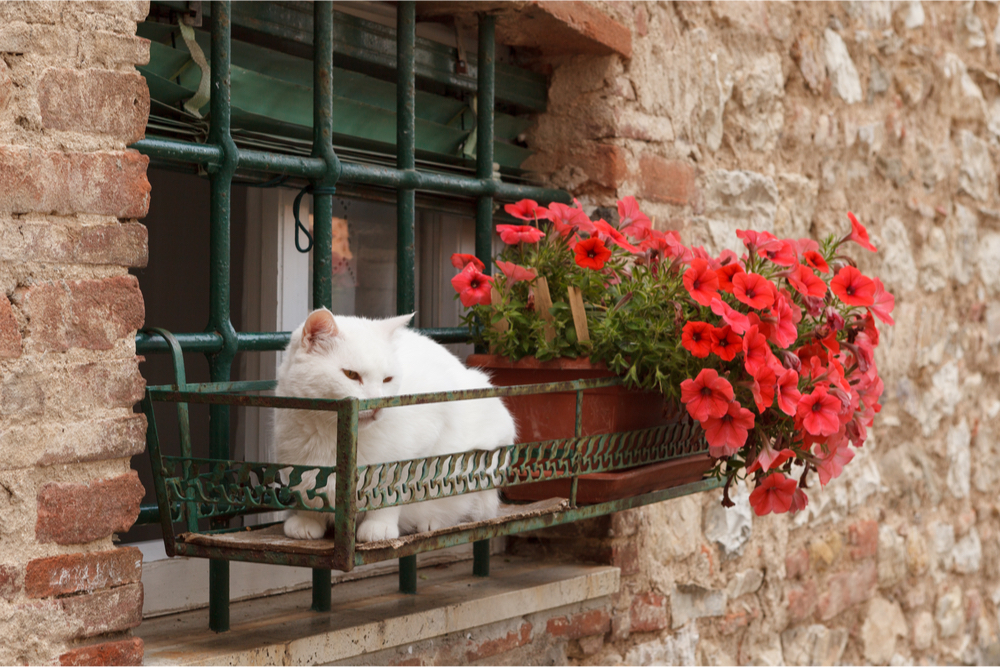 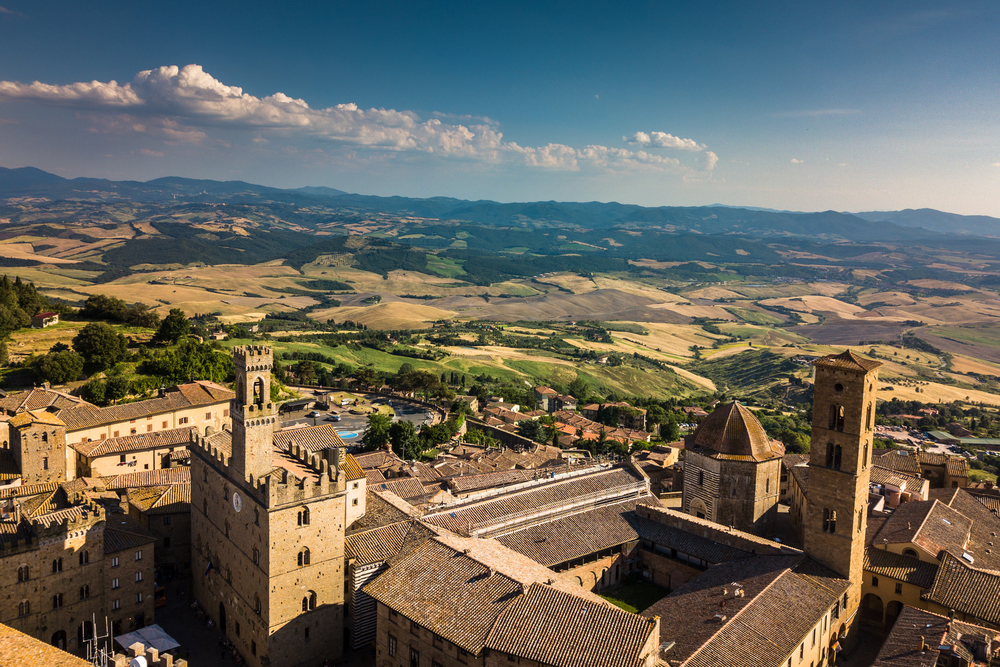 The walled mountaintop town of Voltera is located southwest of Firenze. It is renowned as an Etruscan and medieval art centre, Volterra has the remains of Etruscan walls enlarged in the 4th and 3rd centuries bc, two Etruscan-Roman gateways, and circular tombs from the 6th century bc with vaults of concentric rings supported by a central pillar. The central Palazzo dei Priori has medieval frescoes and a bell tower with expansive views. Volterra Cathedral has a marble entrance and a gilded coffered ceiling. 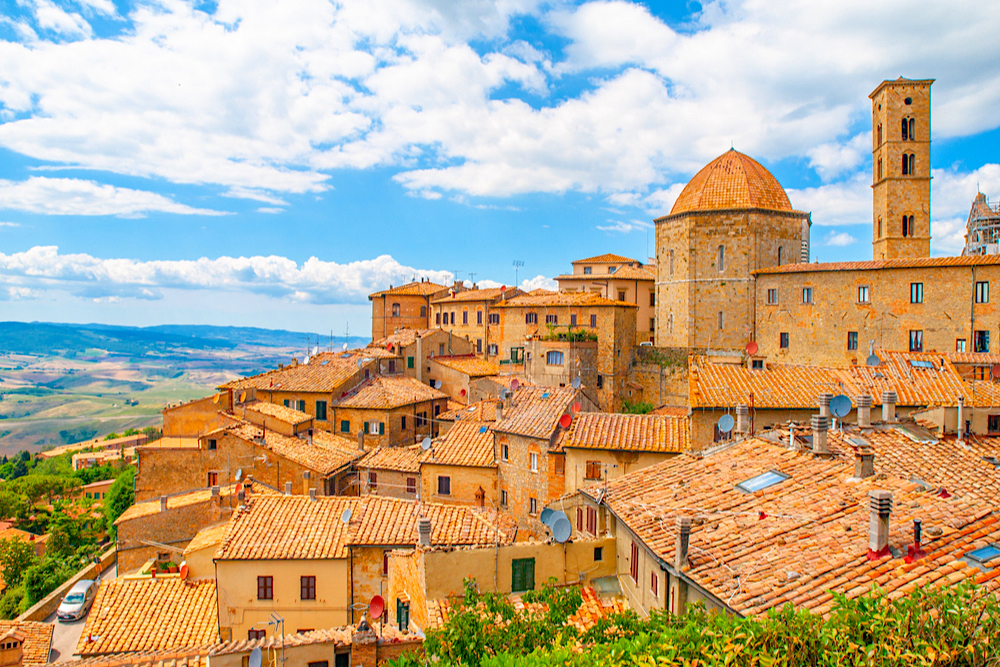 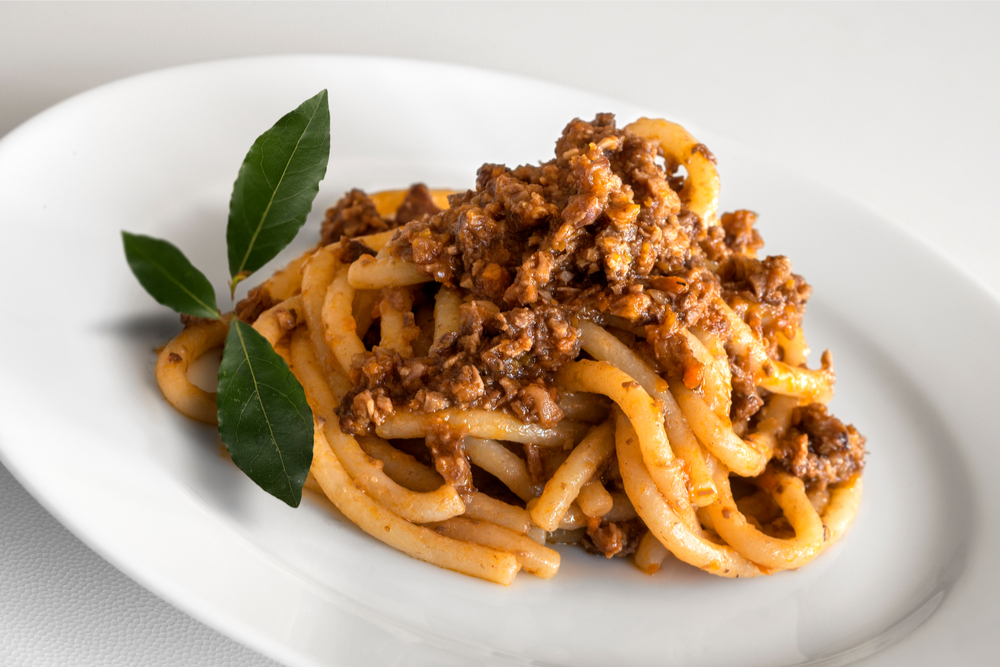 If you are in Italy, you just have to try a number of different pastas. The number one pasta in Tuscany is probably pappardelle, long wide egg pasta ribbons. This pasta is very often homemade and is the pasta of choice for the region’s different types of game, especially wild boar ragu, hare ragu and venison ragu.  Pappardelle is also used for sauces made from porcini mushrooms. 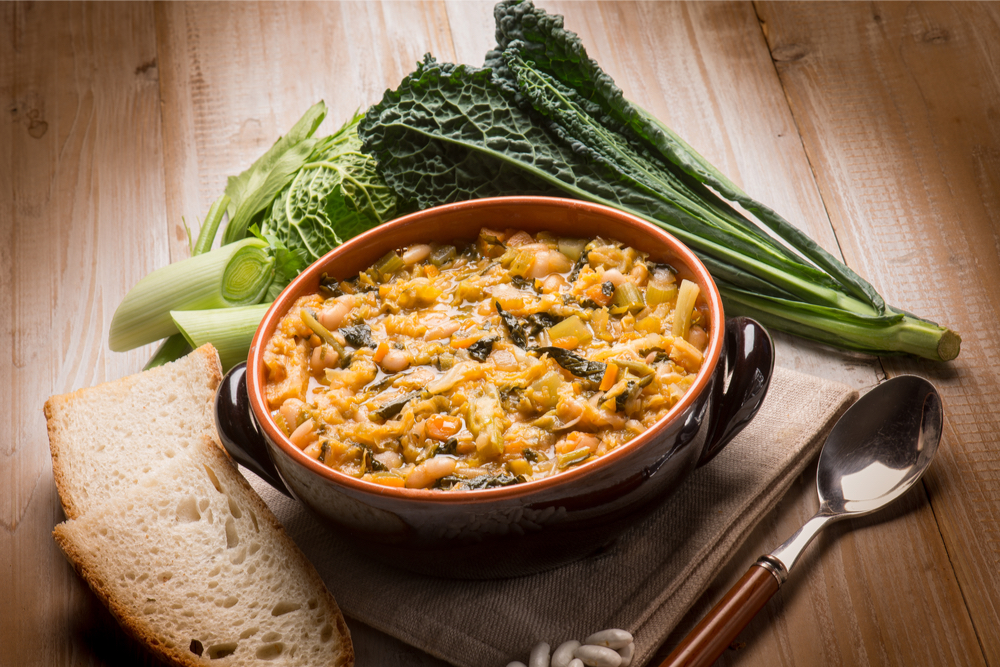 Literally meaning ‘boiled again’ in Italian, ribollita is a soup that epitomises Tuscany’s classic peasant culinary tradition - or, cucina povera. Traditionally, it was made on a Friday with the remains of stale bread and leftover vegetable scraps to be reheated and eaten several days in a row, getting more delicious and flavourful each day. By definition, a ribollita recipe necessitates three main ingredients: cavolo nero (Tuscan kale), savoy cabbage, and cannellini beans. It’s not uncommon to find other vegetables in this soup as everyone has their take on it. 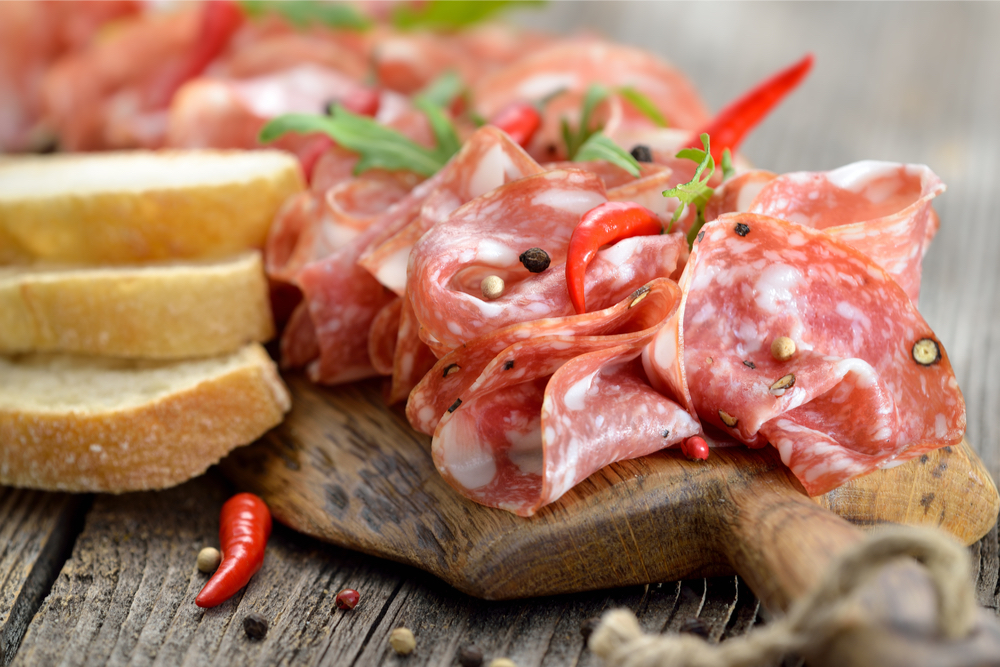 Salame Toscano is a traditional Italian salami hailing from Tuscany. It's produced with pork's ham, shoulder, lean belly, lard, and spices. The meat is ground and the lard is mixed with salt. The two are combined with spices, then stuffed into natural or synthetic casings.

SLEEP AT A440 IN TUSCANY 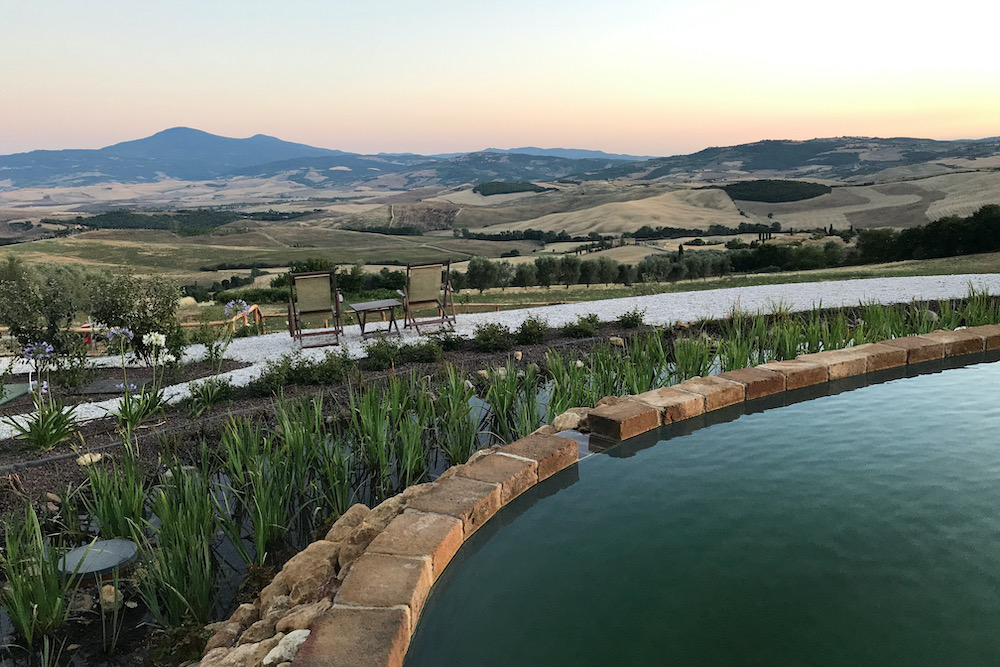 In the picturesque Tuscan countryside, A440 in Tuscany welcomes its guests to an eco-friendly oasis of calm. It is right in the heart of the Natural Artistic Park of Val d’Orcia, recognized as a UNESCO “World Heritage Site”. Experience the luxury of freedom and allow yourself a holiday without constraints. Immerse yourself in the natural swimming pool and its complete tranquillity. 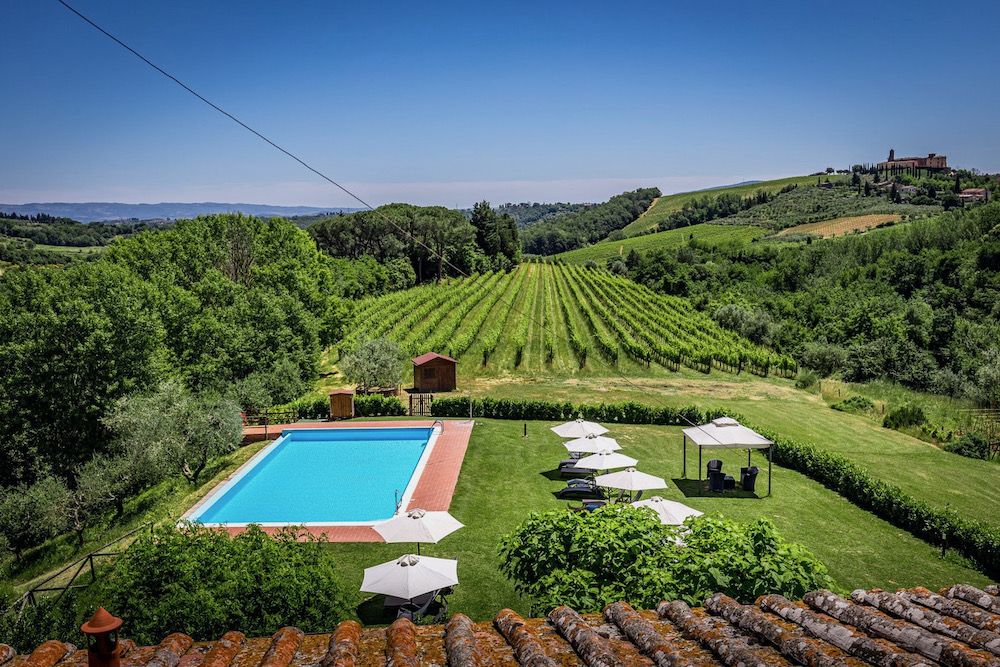 Agriturismo Poggiacolle is located in the heart of Tuscany, immersed in the green hills of the Chianti area, just 2 km far from San Gimignano, from which you have a panoramic view from the swimming pool. From here you can easily reach all the most important art cities of the region such as Siena, Volterrra, Florence, Pisa, Arezzo, Lucca. 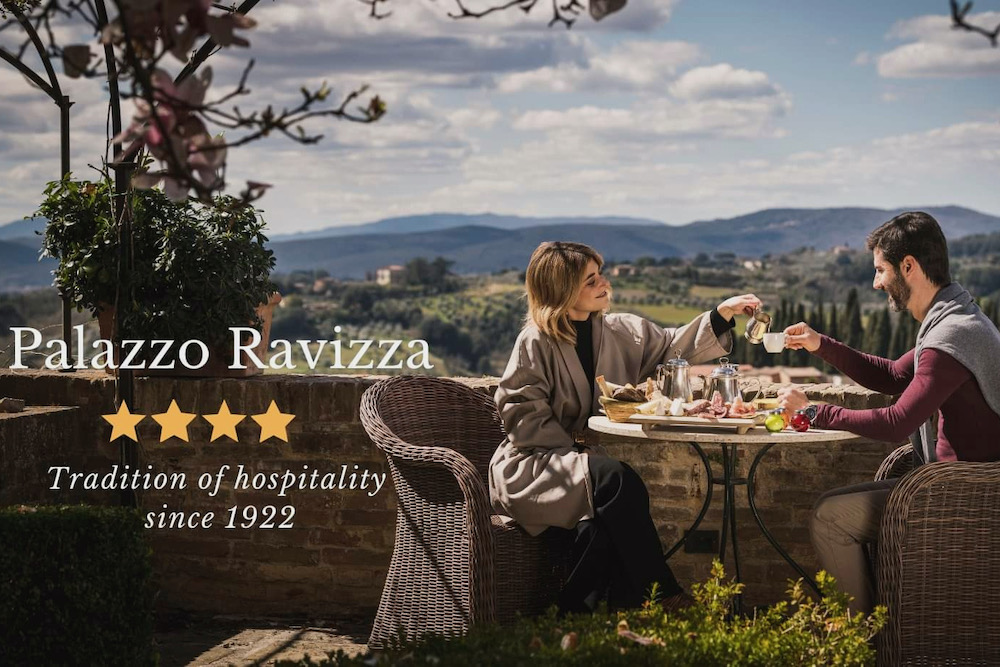 Charming hotel in the heart of Sienna. Palazzo Ravizza is enclosed by the city walls of Siena and preserved its original style dating back to XIX century, when it was restored to become a dwelling and, at a later time, a boarding house. The refined design of the rooms and the period furniture wonderfully match with the mood of a private home. 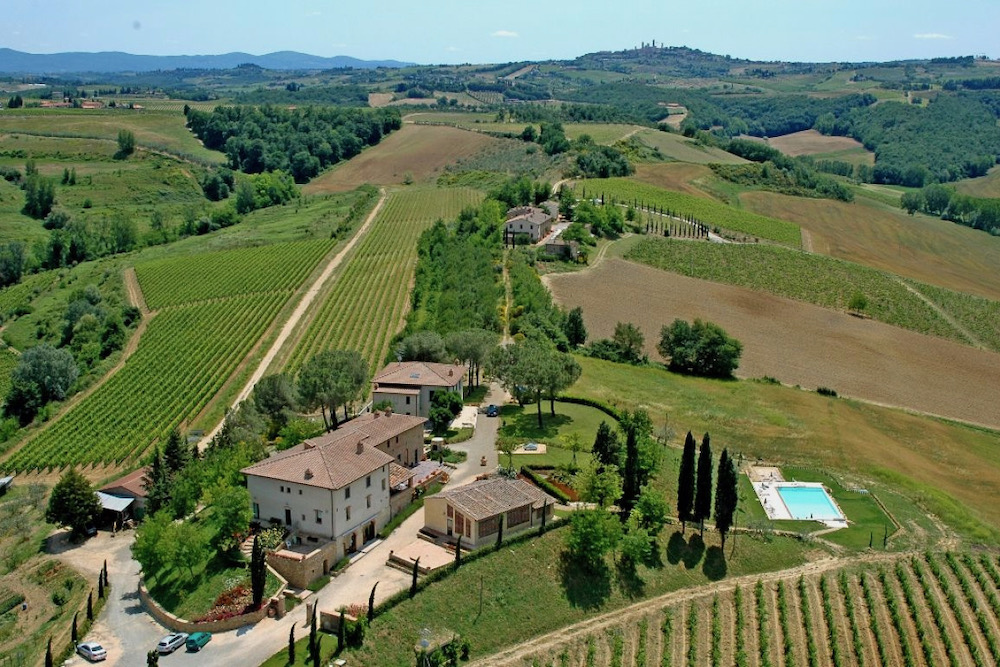 Poderi Arcangelo is an authentic farmhouse in Tuscany located on top of a hill in the countryside of Chianti, halfway between Florence and Siena and strategically placed to visit theTuscan cities: Certaldo, Volterra, Monteriggioni, Pisa, Lucca, Arezzo, Pienza and Montalcino. 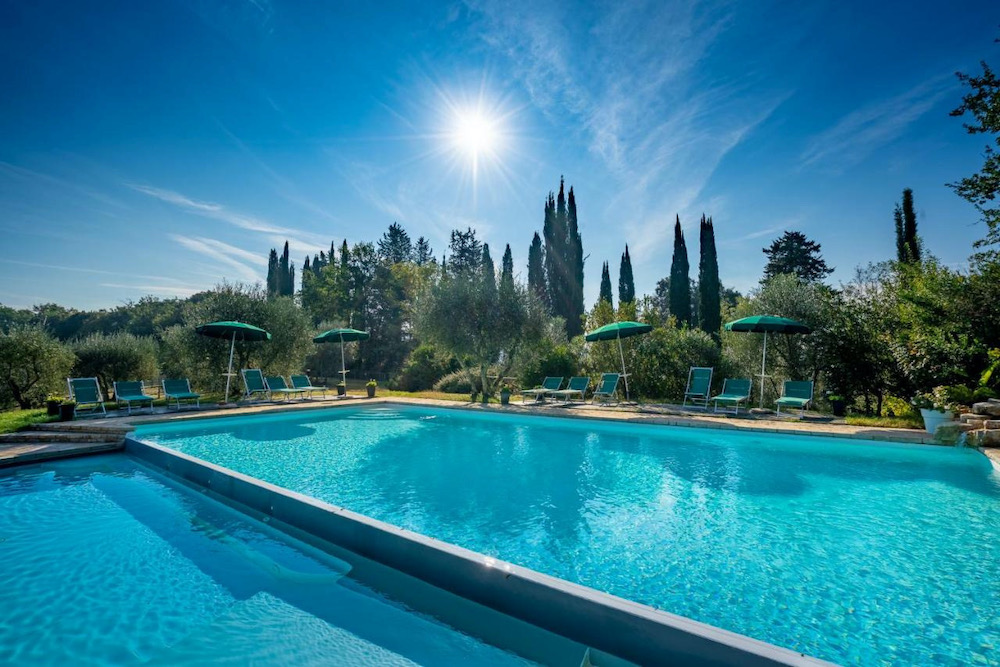 Torraccia di Chiusi is the soul place, designed for and dedicated to those who are looking for a solitary place to find body and mind wellness; thanks to deep silence, intense colors and unforgettable scents. Dive into the blissful panoramic jacuzzi and enjoy the extraordinary view of the Tuscan countryside and the San Gimignano towers. 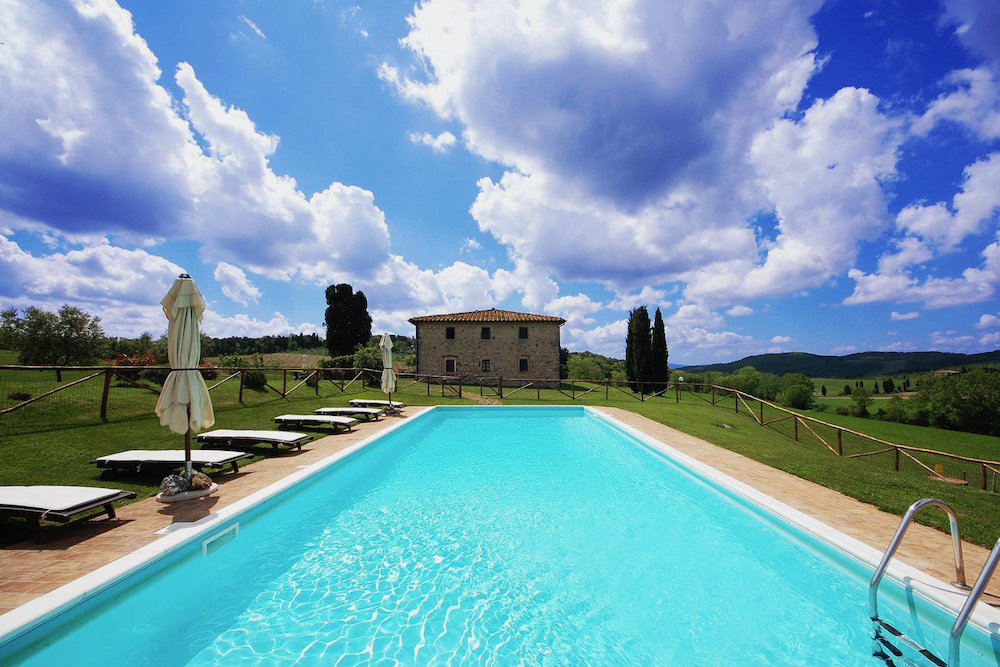 Villa Le Ginepraie is a Tuscan villa with pool, situated on the rolling hills between Volterra, San Gimignano and Chianti area, It is a beautiful 17th century casale (traditional Tuscan farmhouse), surrounded by the green and gold of a fascinating countryside. 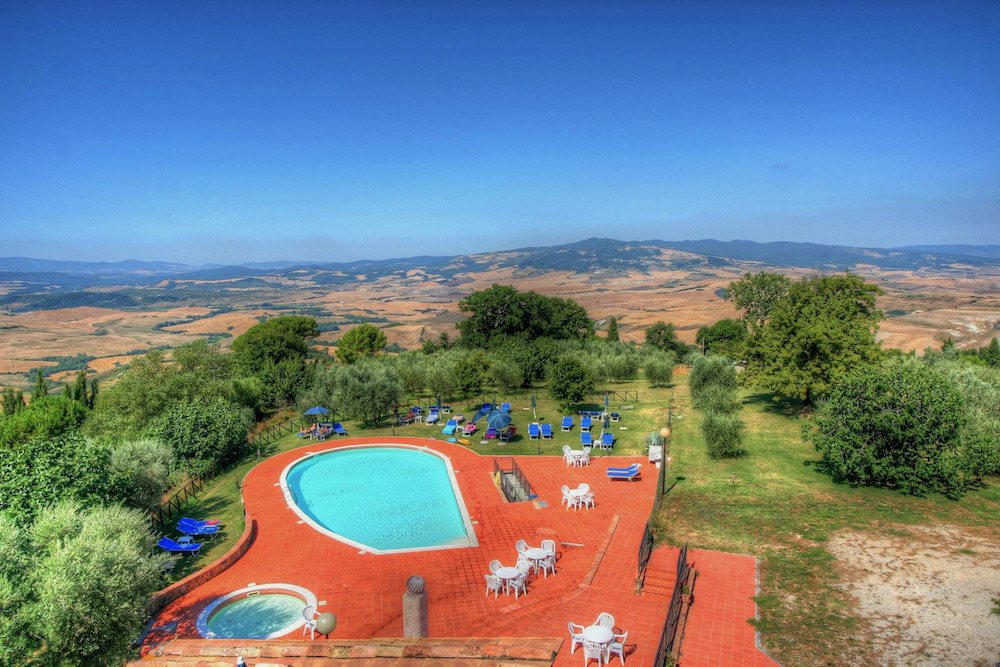 Villa Rioddi, located just outside the old town centre of Volterra (1.3 km), is the perfect base for exploring Tuscany. Since it is so close to the town, you can get to the old town in just five minutes by car or in 20 minutes on foot. The villa offers breathtaking panoramic views of the mountains above Lucca as far as Massa Marittima and, on a very clear day, you can catch a glimpse of the island of Corsica and enjoy spectacular sunsets. 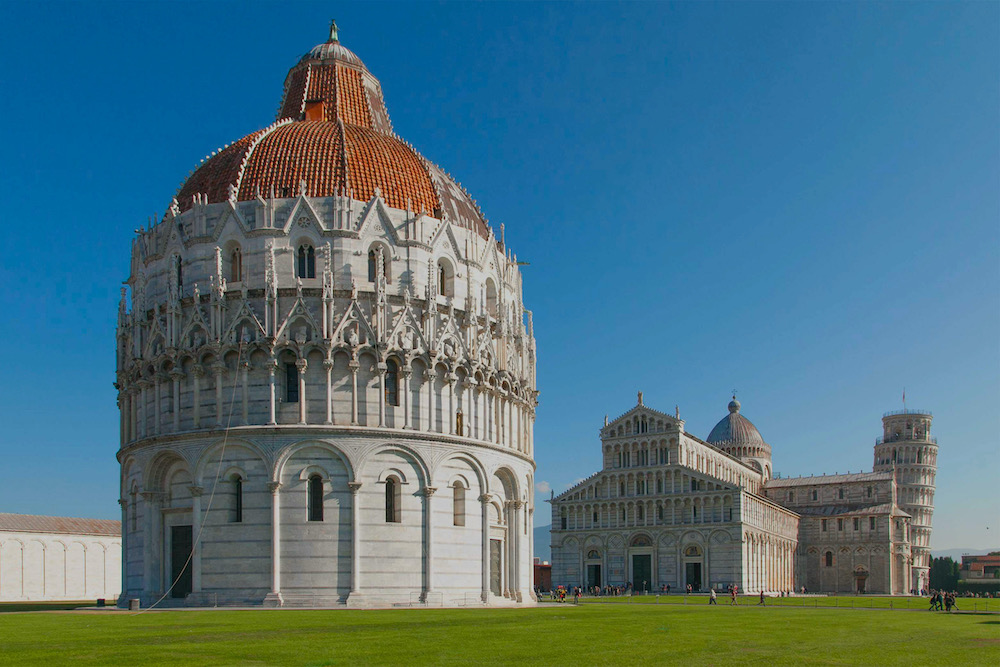 Pisa Explorer mainly focuses on small group walking tours which they find to be the perfect way to get a feel for the city, its people and traditions. Costumized private tours are also available on request. 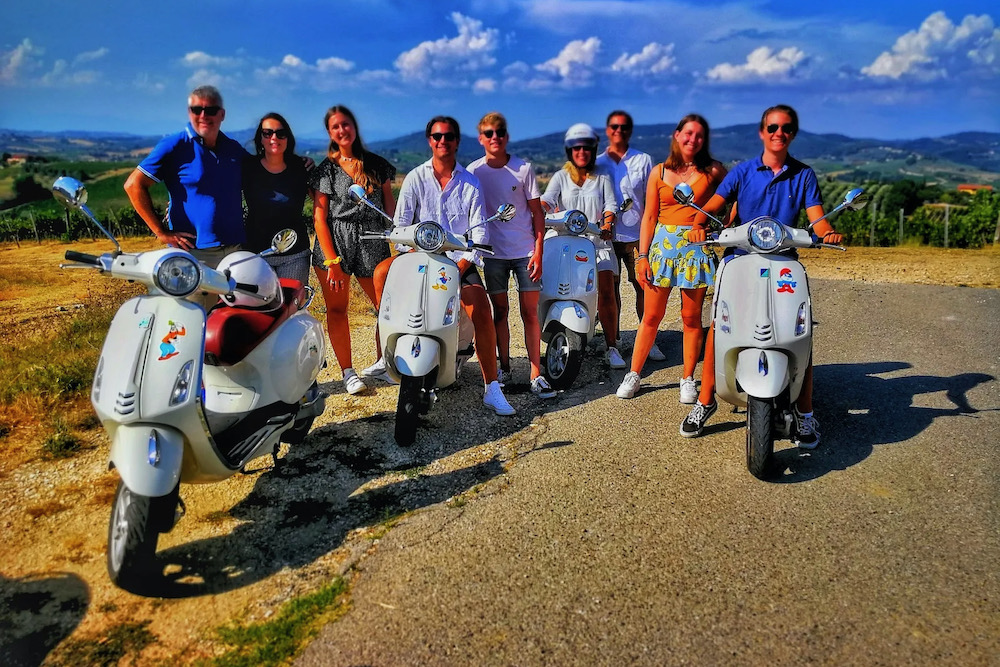 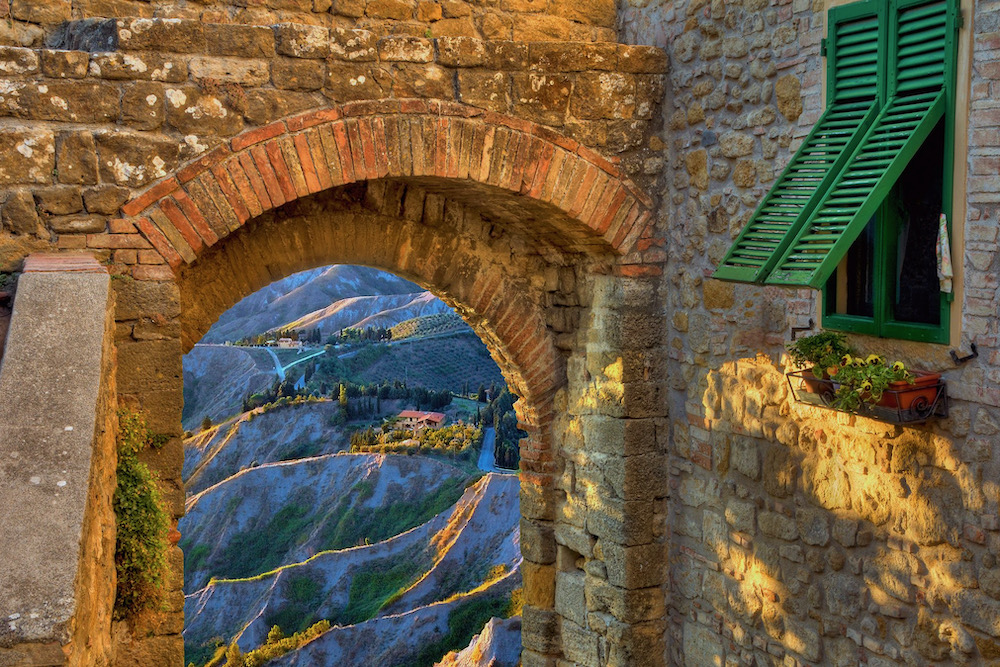 WHEN TO GO: The best times to visit Tuscany are between late September and October and between April and May. During these months, travellers will find comfortable temperatures and fewer crowds at the major sights. The summer ushers in high temperatures and heavy crowds.

HOW TO GET AROUND: The best way to explore Tuscany is definitely by car - rent a car and explore the spectacular medieval hilltop villages and stunning countryside